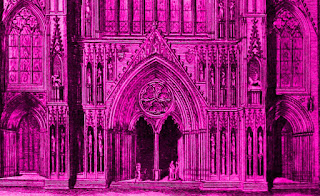 "I agree, we should leave," says Vesania, "but let the lich get a head start. We don't want to antagonize it any further."

They wait by the door. Wait, wait, wait... and as they wait, untold aeons pass. Whole galaxies of stars coalesce from whirling cosmic dust and die in cataclysms of fire, and still the explorers are sat by the cathedral door, waiting in lugubrious silence. Or maybe its only been, like, half a minute or so.

"Maybe we could make better use of our time and poke round the other side of the cathedral," offers Doctor Sêps. [DR 10 Presence d20+0=13, ok]

The others readily assent, and head for the nearest side chapel.

[Q: What's it like? Calmly / Abnormal
Q: What about it is abnormal? lay / society]

The chapel is nearly the mirror image of the one on the other side. The carvings do not depict exactly the same mix of saints and sinners, but this small detail is lost on the travellers who have merely dismissed them as too bulky to loot and too hard to sell. And besides, their attention is more suddenly arrested by the group of [1d6+1=] half a dozen peasants praying serenely before the idols, seemingly oblivious to the intrusion. [reaction=8, Indifferent] 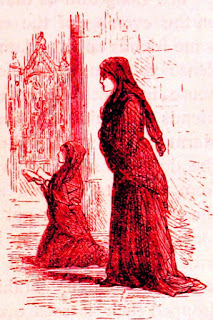 A middle-aged woman in mud-caked rags detaches herself from the rest. "We are farmers from Schlammau, come for our weekly devotions."

"But this cathedral hasn't been here a week."

"Oh, good King Fathmu must have built it summat quick. And it's nice to see some new interest in religion in the parish. Canon Horvik's sermons were getting a bit repetitive, I fear."

"Who're you talking to, mother?" says a bedraggled middle-aged man. "Och! will ye look at them. 's no need for carrying such an arsenal on a holy day." [hostile - submission - weapons]

"Come, father, mustn't be judgemental. Even the good King's soldiers need the comforts of religion."

"Aye, mother, that they do. That they do. Strangers, will ye light a candle and say a prayer with us?"

The explorers mumble excuses and back away...

...right into the path of two shambling corpses. They lunge at Uth and Vesania, who both manage to sidestep the plodding onslaught [19+0, 12+1 both defend]. 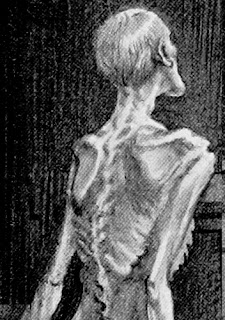 [Round 1 - PCs win initiative]
Törzug smacks the one that attacked Uth with her crowbar, but only tears off a bit of already-dangling flesh from its side [hit for d4=1 damage, but its dead flesh is worth -d2 armour, so 0 damage]. Uth crashes her own crowbar down on the zombies bald pate, and with a wet pop reduces its skull to a sickly porridge [critical hit; d4x2=8 damage, -d2=1; 7 damage destroys it].

Irtinj swings his great Bidenhänder at the other zombie, but the point just barely scrapes along its shoulders [2-1=1 damage, dropping it to 6hp]; at least he didn't hit his friends with the massive blade. Neither Doctor Sêps nor Vesania get close enough to score a hit, nor do the zombies clutching claws find their mark [miss, miss, defend].

[Round 2]
The zombie is surrounded now, though half the combatants fighting over the tops of pews mean few strikes land home, and those that do (Irtinj's & Törzug's) do little more than cosmetic damage to the stinking corpse [I 2-2=0, T 1-1=0 damage]. The thing makes a vicious lunge at Vesania with sapping, frothing jaws, and sinks its teeth into her upper arm [2 damage puts her 6hp].

[Round 3]
Irtinj gives it another love-tap with his Zweihänder, apparently [3-1=2 damage]. Törzug cannot reach it from her position [miss]. Doctor Sêps merely continues to be useless [miss].

Vesania changes her grip on her femur-club, and smashes it into the zombie's  forehead in an attempt to dislodge it from her arm. Her plan meets with mixed success, for, whilst she does knock it free and send it staggering back several steps, it comes away with a sizeable chunk of meat from her arm and shreds of last season's haute-couture still clenched in its gory maw. [She hit for 3-1, dropping it to 2hp. She also rolled a Fumble on her Defence, taking d2x2=4 damage, leaving her also with 2hp]

[Round 4]
The thing staggers right into Törzug's path, and she snaps its spine with a solid blow [4-1=3 damage, destroyed].

Despite loud affray, the screams, the curses, and crashing over of pews, the peasants are still happily praying in the side chapel. One or two look over at the commotion, but just smile beatifically and go immediately back to their devotions.

Doctor Sêps finally proves his worth by patching up Vesania's grisly wound with supplies from his medicine chest [healing d6=5, back to 7hp]. "There," he says triumphantly, "good as new!" But inwardly he wonders if she'll live another 48 hours, as there is no known cure should the wound become infected [She needs to roll a DR 8 Toughness test to avoid death in 2 days: 16+2=18, success].

The others concur. They hurry down the centre aisle to the entrance and slip out through the heavy doors.

They note with some disappointment that Törzug's donkey has vanished without a trace -- and all their provisions in its pack along with it.

They make straight for the crater wall, intent only on the climb out. It is only luck that Vesania hazards a look back at the cathedral, and sees the St Kurthurn's Wheel charging with unholy energy. Thus it is that she leaps out of the way just in time, as the ray of grey light vaporises the rock where she had been standing. [random target, d5=V. DR 16 Defence roll -  d20+1=16, ok] 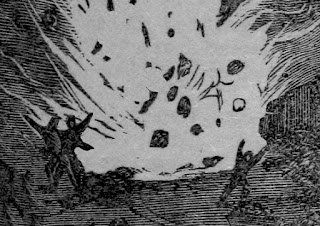 The travellers find a less-marshy patch of ground on which to make "camp". The night is long, cold, and miserable, but at least free of encounters with fiends, roving bandits, or petulant undead sorcerers.

[They have no food, so no hit points are regained from rest. Irtinj had depleted all his Omens, so gains d2=1 for resting 6 hours.]

The weary travellers trudge back across the sodden plain. A steady drizzle ensures they are all completely soaked through, sniffly, and shivering at all times. Their stomachs rumble from lack of food, but they must stop occasionally to rest, licking water from leaves and grass, or drinking from the less murky puddles.

About midday (though you'd never know it to look at the grey, heavy sky) they come upon a [d6=] man clad in a full suit of ornate, but very functional, plate armour. He is sitting in the mud beside his shattered shield, dented helm, splintered lance, and bent sword, loudly bewailing his fate.

His head snaps round when he sees he is no longer alone on the plain.

"What are you peasants looking at?" shouts the knight, choking back his sobs. [hostile - resentment - the character]

"What a sad figure you are, sitting in the mud!" laughs Uth.

"If I still had my sword, I'd make you eat those words. Or rather my spear -- I'd not profane my sword on the likes of you." [hostile - combat - equipment]

Törzug isn't having it. She levels her crossbow and looses a bolt, which punches right through the mail protecting the knight's hip joint. He shrieks and passes out, falling back into the mud with a clanking squelch.

None of the others bat an eye. They continue past the knight on their dreary way. Irtinj pauses only briefly to snatch the knight's purse from his belt, which contains the princely sum of [d66=] 65 silver coins. They hear the knight come round as he begins to spew out his impotent rage against the glowering heavens. No one looks back.

Back at the henge temple, they find their friend the monk hunched over the body of one of the other coenobites, worrying his blood-drenched stomach. The monk looks up with dead eyes, intestines trailing from his mouth, then stands and rushes towards the arrivals to add them to the feast. He leaps into their midst, and is soon beaten down in the mud.

But the monk fights on, and chews through Irtinj's boot, biting deep into his ankle before Törzug's final blow crushes his skull.

[It was a 3 round fight with SO MANY missed attacks. Irtinj is bitten for d2=2 damage. DR8 Toughness: 11+0=avoids sickness

The once-pious monks must have had a vow of poverty, for there is nothing worth stealing in the henge temple. The explorers do manage to find a significant quantity of unspoilt food, which, whilst all unappetising mushroom-slop, should suffice for the rest of the journey to Schleswig. They also help themselves to the monks' sleeping mats and threadbare blankets, which are almost proof against the night's cold and damp. Irtinj and Vesania help themselves to some vellum rolls, intending to peruse at their leisure.

They make camp well away from the henge, lest any more undead are on the prowl.

For the next two days they trudge over blighted, muddy fields. The drizzling rain never stops, and they don't see a single living creature -- nor, fortunately, an undead one.

The next day the rain finally ceases, and the air becomes marginally warmer. Thunder booms as the grey clouds race overhead.

After a few leagues' travel they smell smoke on the breeze. They march on and soon come upon its source. A tiny village of a few dozen houses has been burnt to the ground, most likely by King Fathmu's soldiers. Not a soul stirs in the wreckage, and the travellers continue past unmolested.

The next day is eerily quiet. The travellers fear the noise of their clomping boots must be audible for miles through the stillness. But they journey alone through endless plains of mud and weeds as the world holds its breath.

On the 9th day their clothes are finally dry and free of the damp. And so with a peal of thunder the sky opens up in torrents as they finally come in sight of the imposing gates and slender spires of the sad-but-gaudy city. 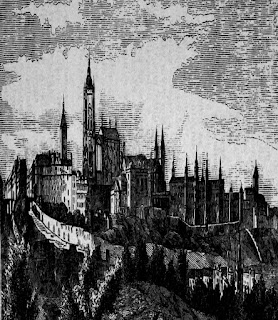