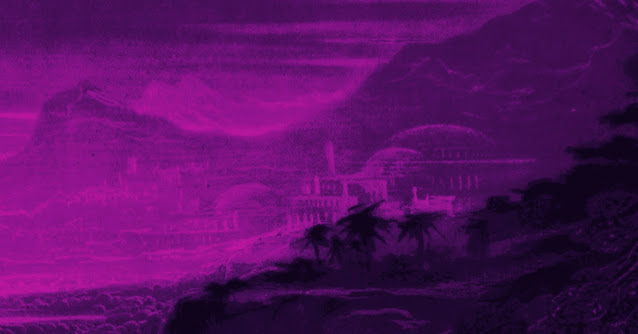 The ship bound for Ulq is a fast merchant. Barely a day and a half is spent at sea before the mist-shrouded harbour and graceful domed temples of Ulq come into view. Fhenteskeer is nervous the whole voyage; as a Fire-priest the sea is always a source of discomfiture. He spends nearly every waking hour -- which are many, for sleep will not come for him -- in  unceasing and wretched prayers. Perhaps this is why the voyage passes for him without incident. Grebdal Themp spends the day at dice with the sailors, and the night playing cards with the captain and first mate. But despite his skill at games of chance, and his luck at games of skill, he is no richer upon disembarking than he was upon boarding, nor --fortunately-- poorer. Ksandajja, so far from her desert home, is fascinated by the swelling waves and unfathomable depths beneath them. Once does she espy a mermaid sunning herself on a stony reef in the spray. The little siren calls to her with her magical song, and though she be sorely tempted, the sorceress does not drown herself for desire of the lovely creature. She does, however, spend the rest of the voyage in a mood.

[Leaving Ângu and sailing to Ulq formed the substance of the first Scene. It was mostly uneventful, and the actual adventure was yet to come.

There's more that got cut from the narrative than was worth leaving in, but for those who are interested in solitaire gaming procedures:

Chaos: Out of Control (d8) (chaos improves one level as cult dispersed)

Setup: travel from Ângu to Ulq

-16 gp from treasure for room & board: all Stamina (& Luck) restored

As the trio disembark in Ulq's harbour, they find a quiet-seeming tavern to use as their evening rendez-vous, for they are all eager to see to their several interests in the city; Ksandajja makes for the Temple of Hamaskis, Fhenteskeer must repair to the temple of his own god, and Grebdal Themp would merely like to convert some baubles to golden coins.

[The NPC list has been cleared out since it was specific to the last city. I'm rolling one random encounter in Midkemia Press' Cities per PC errand. One of the many benefits of solo gaming is that you can split the party without players sitting round being bored.

It's been a while since my last AFF posts, so as a reminder of who the PCs are I will preface their individual errands with their updated character sheets.]


As Grebdal Themp makes for the marketplace, he hears a commotion up ahead. A band of four drunken warriors are lurching unsteadily down the street, hurling crapulous abuse at all whose paths they cross. 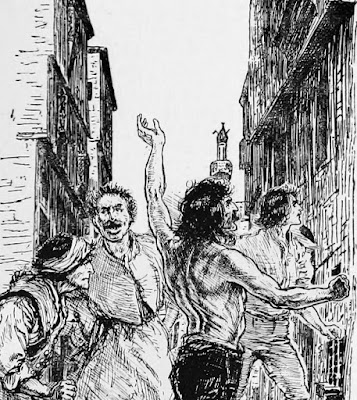 Not wanting to risk an incident, Grebdal Themp melts into an alleyway and leaves some less fortunate passers-by to their fate. Once in the marketplace, he asks about for a reputable jeweller [City Lore roll succeeds] and is soon inside a brightly lit little shop, haggling with the proprietor under the hawk-like glare of two enormous mounds of muscle, each holding an axe taller than Grebdal Themp himself.

He's not sure if he'd inadvertently said something to arouse the merchant's ire, or if all foreigners in Ulq receive the same ill treatment, but from the first the merchant seemed disinclined to talk to him and offered only the most ludicrously low price for his baubles. Grebdal Themp leaves with his treasures in a hurry.

[He'd previously made his Evaluate rolls, so knew the actual values, but...

As Fhenteskeer is praying before the blazing altar in the temple Filash, Lord of the Sacred Flame, he hears a commotion behind him. He turns to see a powerfully-built barbarian warrior arguing with a pair of temple attendants who are trying to convince [d6=] him he cannot profane the sanctuary by carrying his weapons here. 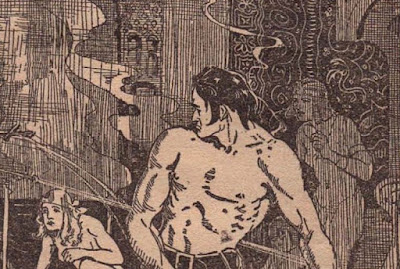 Fhenteskeer strides over to help the attendants who are visibly wilting under the barbarian's stare. But as soon as the warrior sees him, he throws himself at Fhenteskeer's feet with the utmost subservience.

"O good priest, will you hear my poor story? For my enemies are like unto a gangrene, and must be burnt away in the cleansing flame!"

"I am ever ready to aid a true aspirant in distress," says the priest.


As Ksandajja is wending her way towards the temple of Hamaskis, she hears a commotion all round her.

[Encounter: already occurring - public execution (normally I re-roll duplicates, but this was too good to discard]

The townsfolk are all excitedly babbling and rushing towards the square at then end of the street, and the sorceress is swept along by the clamouring throng. In the square, in the shadow of the temple of Sicalla, goddess of justice and punishment, she finds a public execution taking place. Ulqite soldiers have bound several criminals, naked and howling, to upright pikes, which one by one are being lowered over hot coals to roast the unfortunates alive. The foul smoke stings Ksandajja's eyes so she cannot read the placards announcing their crimes. She hurries away on a detour down a narrow street, vowing to be on her best behaviour in the city. 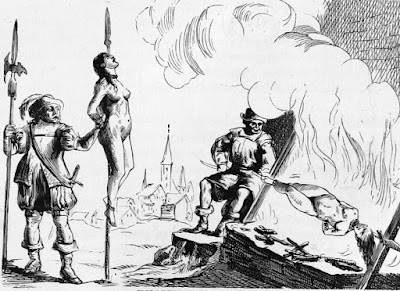 The tyraleion -- for Hamaskis is worshipped in Ulq under the name Tyralar -- is an imposing edifice of gleaming white marble. As Ksandajja steps silently over the threshold, the twinned scents of frankincense and old papyrus greet her nostrils, giving her a dreamy nostalgia for the far off desert temple wherein she'd learnt the Arts of Sorcery.

She addresses one of the priestesses in ancient Allansian, and finds her all too eager to speak with a woman of learning. Once she hears the sorceress' petition, she gathers a handful of other clergy, and they discuss her omen at length.

[Ksandajja's Etiquette roll to determine how they received her was a natural 2, critical success!

I treated their explication of the omen as a Rumour (ask an NPC), with +1 for the good reaction.

rolling 1st truth die now d6+1=7! very likely! (When the second truth die is rolled, the minimum result will be Partly True, and there is a 50% chance (4+ on the d6) of Completely True.)] 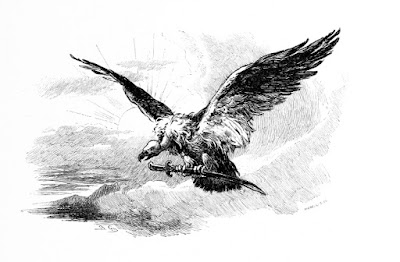 Ksandajja has been lost in heady meditation before the golden statue of youthful Tyralar reading from a lengthy scroll when the priestess returns to her, a grave cast to her countenance.

"It is a dire portent, I fear. The harbinger of death snatching away the sword means that you cannot best your greatest foe by force of arms; should you try, death shall tear victory from your very hand, and you shall surely perish." [-4 combat rolls]

"And the two executions I witnessed...?"

"They do confirm it, O sister. Death is waiting to meet you."

[She does get 1 Luck back (to max), as forewarned is forearmed or summat.]

As Fhenteskeer is leading his new acquaintance towards the inn to meet his comrades, the hulking warrior suddenly doubles over in pain and cries out.

"A! it is the adept's curse eating away at my insides!"

But the fire priest is not convinced. Whilst there is some small chance that foul sorcery is involved, he thinks the much more likely culprit is the undercooked sausage the barbarian bought from that dodgy-looking street vendor.

Setup: convene at the inn

Night is falling by the time Fhenteskeer returns to the inn with his new-found comrade. They find Ksandajja and Grebdal Themp sitting sullenly at a corner table in the common room, a mostly empty jug of spiced wine on the table between them. Ksandajja sharpens her sword mechanically, whilst Grebdal Themp turns the unsold jewels over an over in his fingers. The rest of the clientèle in the inn are but weary travellers, who unsurprisingly are giving the pair a wide berth.

"My friends, I have someone I want you to meet," says the fire priest. "listen to his proposal whilst I fetch another jug of that wine."

He scurries off to the innkeeper as the barbarian addresses the others. 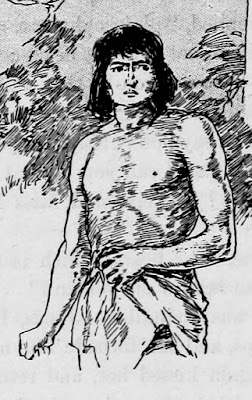 "I am Ilog, a warrior of the Goharsian -- or a 'mountain barbarian', if you prefer. Some months ago I met a wizard in Drammub, who hired me and several others for protection on a  foray into the Baubauan Jungle. He'd happened upon an old map, which showed the way to lost, ancient ruins, said to hold the fabulous treasures of a bygone age. One night our camp was attacked by savage beasts. The wizard vanished during the fighting, taking the map and the rest of our provisions with him. We were all too injured to attempt a pursuit, and had to turn back, but disaster followed disaster, and those who did not perish to monstrous creatures were stolen away in the night by the cannibals who haunt the fell jungle. I alone survived the nightmare and reached this city. But I have consulted old books in the library of Tyralar and with what I remember of the map, I think I know where to find that accursed wizard in those hidden ruins."

"You seek to recover the treasure for yourself?" asks Grebdal Themp.

"Treasure? Phaugh! It's yours, should you help me. I seek only vengeance on that treacherous cur."

"What do you know of this wizard?" asks Ksandajja.

"Only that he called himself Ensevektu -- though I suspect even that was a lie!"

"What say you, friends, to good Ilog's proposition?" asks Fhenteskeer.

Fleshing out the adventure--

When the 'vengeful warrior' encounter was first rolled, I'd asked the Oracle...
Q: Revenge on whom? (UNE): unseemly adept
Q: Why? (Mythic): Bestow / Riches - there was treasure involved

Unusually, I managed to fit them all into the adventure without any issue (I almost always end up ignoring at least one result when I pre-roll an adventure as it develops by itself in another direction), though one of the results became merely scenery and not a challenge of any sort.

Ilog is a starting character--

Ilog tells them that the ruins lie deceptively close to the city; it should be but [1d6=] three days' travel through jungle.

They make a quick trip through the market in the morning to buy supplies. Grebdal Themp has another go at selling his baubles, but finds all doors close in his face. [City Lore at -2 to find a different merchant: natural 12, a fumble]. Evidently the merchant he'd offended has spread word through the city not to trade with him.

Ksandajja spends what little gold she has to buy a day's worth of unpreserved food for each of them. She's optimistic about being able to forage more than enough food on the journey.

The road out of Ulq is little more than a dirt track winding through the terraced farmlands on the hillsides surrounding the port city. The companions follow it up to the crest of the ridge where it abruptly ends. Beyond the stone watchtower guarding the limits of Ulq's influence, the lush green jungle waits to meet them. 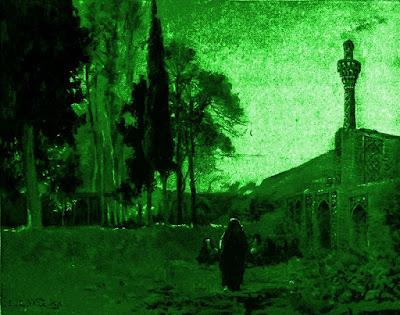