"Gather round, O children," spake the elven sage, his voice resounding throughout the Shimmering Hall. Eight young elves silently moved to sit at his feet. Behind the sage, the council of elders stood impassively. "Bow not your heads," the sage continued, "look to me, for you will be children no more. An hundred years and a year have you lived; time it is to put aside childish things and find your way in the world. We are a dying race, yet proud, and ever-observant of the old customs. You are the best of your generation, the fruit of the noblest and most worthy houses. Before you can truly take your place amongst us as equals, you must be proved worthy. Venture forth from our forest, from great and wondrous Feyalldra, into the human lands, there to fulfil this noble Quest, which I now lay upon you...."

I've had elves on the brain for some reason, and that combined with reading about other people's dungeon crawls has inspired me to try something similar. So I rolled up a party of 8 elves to send forth into certain death adventure and glory.

My toolbox for the adventure (campaign?) is:
I've also been playing with Hexographer, so I have 60x80 hexes to explore. Each hex is 2 miles across. Here's the starting area (click to enlarge): 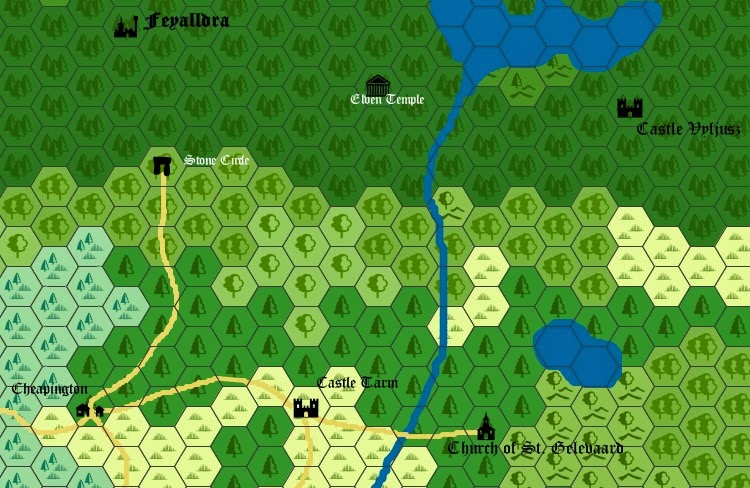 Feyalldra is the great elven city in the Elven Forest (all the heavy forest west of the river/lake - Elves move through their forest as if it were clear terrain, and automatically find enough food and water). The stone circle is a meeting place for the humans and elves to conduct trade. Cheapington is (as its name suggests) a mercantile town that grew up because of the human-elf trade. The Church of St. Gelevaard is a church of the Light God, built on the very site where St. Gelevaard was martyred 1000 years ago. The climate and and pseudo-medievality is that of southern England circa 1550AD. There is a large bay 20 miles south of Cheapington, the ocean proper is 20 miles further south. This area is on the border of civilisation, so firearms are a bit rarer than in other parts (to the East). I'll make up / randomly determine the rest as I go.

Notes: I was lazy and didn't type these up until I'd been playing a while, so their leftover money is slightly lower than when they were first equipped, and all their rations have been eaten. If you ever need a party of elves to throw at your players, have at.

Social Standing is just the roll for starting money. Since these are all noble elves, I wanted to have some idea of their relative hierarchy. Equivalent human titles are thus (mostly following the list in World of Greyhawk):
18 Duke/Duchess
17 Prince/princess
16 Marquis/Marquise
15 Count/Countess
14 Viscount/Viscountess
13 Baron/Baroness
12 Knight commander
11 knight banneret
10 Knight companion
9 knight bachelor
8 knight
7 elder
6 yeoman
5- untitled

Labyrinth Lord conversion: LotFP elves are all Chaotic in alignment and start only knowing 1 spell, Read Magic. For LL, make them all Neutral and give them each 2 first level spells in their spellbooks. Also, convert SP to GP, and CP to SP.

Enough with the set-up; onwards to adventure!

Setup: Neldir the elf has stolen a forbidden tome of ancient lore from the library in the ancient elven city of Feyalldra. He was last seen fleeing south, several days ago. The PC's quest is to track him down, recover the book, and bring him back if possible. The characters collect their equipment and spend a night's sacred vigil in the Shimmering Hall. The Elders give them each 2 applications of a healing salve (cures 1d4 damage - I'd like to keep them alive at least a little while). In the morning, the PCs set out towards human village to the south.

Modified Scene? roll of 2 = Interrupt (under chaos to modify, even is interrupt, odd is altered)

Interrupt: Remote Event - Oppose victory (there will be a problem in the human town, making it hard to get any information there.)

Characters: Neldir, the Elders of the Elven Forest

day 1. The characters travel to Stone Circle without incident (i.e. no random encounters). It's easy travelling through the forest in which they grew up.

day 2. Travelling along the road to Cheapington won't take the whole day, but the PCs intend to stop over there and see if any of the humans have news of Neldir. The rolls for encounter are 6,1,6. One forest encounter in the morning, a second encounter when they hit town.

Forest encounter: (2d8=)11 brigands (5 on horses, 6 on foot)
Neither party is surprised, The brigand's initial reaction is Indifferent. The elves decide these humans look a bit unsavoury, and so casually attempt to evade them.

Q: Do brigands pursue? Yes.
The elves attempt to lose their pursuers in the forest. Chance of evasion, using Expert set evasion rules is: 70% +25%(forest) -25% (brigands faster). A roll of 31 is a success. The elves slip into the trees and disappear, leaving the frustrated brigands to stake out the road again.

The elves arrive at Cheapington in the early evening. They find lodging at an inn (the Lamb and Trefoil) and sit down to a simple meal. They had been told that elves were welcome in the town, but everyone seems strange and distant. Something is amiss.

After dinner, they are sipping wine in the inn's common room when someone does finally approach them.

Rolling on the encounter table results in a Vampire!
Reaction roll is fortunately 9, Talkative.

Q: Is the encounter related to the problem in the village? 50/50 - 78, No.
Q: what's up in the village? Desert / Prison. Prisoner(s) broke out of local gaol and killed the head of the watch in the process.
Q: What does the vampire want, then? Release / Riches

Six places in the vicinity (mostly off the above map) could hold riches. Rolling 1d6 and counting counterclockwise =5, the Church of St. Gelevaard.

"Don't worry, my friends," says the vampire, "I do not feast upon your kind. I do have information on the one whom you seek, but I require a service of you in return. There is a certain... treasure... at the the Church of St. Gelevaard. If you acquire it for me, I will tell you everything I know."

Rumour type: Fact (table 1) about Environment (table 3)
Magnitude (table 7): roll of 11, +/-4 (so, pretty bad)
What's the rumour about: "...matri multis balatibus agnum / Martius a stabulis rapuit lupus. Undique clamor / tollitur..."(Aeneid IX, 565-7)
(with much bleating the lamb is snatched from the enclosure by the wolf of Mars. Thence arises a clamour)
Interpretation: Barbarian raiders (beserkers) from the hills have been plaguing the village of Ullgrim.  Ullgrim (pop. ~50) is a farming village about 50 miles SW of Cheapington.


The next morning there is a strange man waiting for the elves in the common room as they come down to breakfast. He wears a tunic embroidered with the the same device found on Eril's signet ring. "My Lady wishes to know if you have reconsidered her offer?" intones the man in a far-off voice.

"We have," replies Oighonlaer. "Pray tell what it is your noble Lady seeks?"
Posted by Alea iactanda est at 16:29

Email ThisBlogThis!Share to TwitterShare to FacebookShare to Pinterest
Labels: let me tell you about my character, LotFP, sandbox