LotFP solo - Part the Fourth: "...too mad / Was the attempt, and yet more mad were now / Repentance of the irrevocable deed"

"What luck," said Neldir, his words echoing in the dank cave, "that I ran across the three of you that night near C-. Not many elves come out this far from our forest. Yes, quite a stroke of luck indeed. I had thought I'd have to settle for human... ah, helpers. No, it's going to work much better this way."

The three elves -- gagged, bound, and trussed -- could only look on in horror as Neldir traced the magic circles on the cave floor. 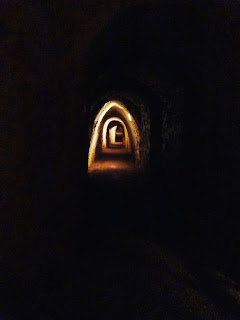 Setup: Interrupt (was: set off to ruin after thieves) Remote Event: Attract/Evil (Neldir summons a demon to track the party) 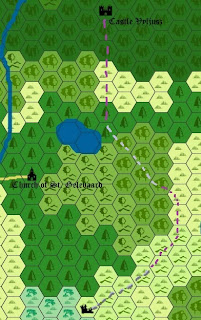 Setup: (unaltered) set off to ruin after thieves

The PCs set off to the south, fully rested and with plenty of provisions. No encounters.

The party manages to get lost, travelling SE instead of S-SE to avoid the hills. A hawk flies overhead, but otherwise the day passes without incident.

Encounter in the grassland: a Lion (normally, I'd have re-rolled this, but as a lion was emntioned in the last rumour...)

The elves try to evade, but cannot. The lion gradually closes to within 60'.

Miolla, Théscine, Benyithelnol and Debinvarr try to frighten it off by shooting it with their bows. All of them hit except Debinvarr. Damage rolls are 3+1+1= 5 damage, which only angers the beast. It rushes to attack.

Yet (round 2, morale check succeeds) it fights on. Oighonlaer drives his spear into the great cat's flank, and it falls (with 0hp). Firdeth delivers the coup de grâce.

Oighonlaer rushes to Caerndíl's aid with the healing salve. Three applications heal 7 total damage, bringing him back up to 4hp.

That night as the elves are camping in the hills, a band of 6 brigands notice their campfire and approach with nefarious intent. Fortunately Debinvarr and Lycinia see the glint of their weapons in the moonlight, and rouse their friends to action. [encounter-hills (night): 6 brigands. no surprise, reaction =3, unfriendly.
Q: Do they attempt to frighten off the party? Likely: 06, Exceptional Yes.]

The Brigands are no match for the elves. The battle is quick and bloody; only one brigand escapes with her life (fails morale at the start of the 3rd round and flees). Of the elves, only Benyitholnel was wounded, but it was enough to nearly do him in (down to -1hp). Three applications of healing salve cure nearly all his injuries (back to 3 of 4 hp).

The next day after six hours travel they arrive at the ruins, where they find... 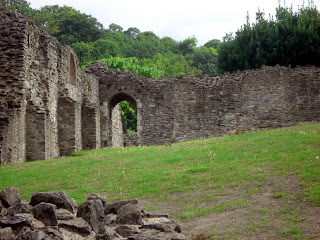 Setup: Roll of 1 agianst Chaos factor indicates an altered scene. The PCs were going to set up camp and explore the surface area of the ruined monestary.

Alteration: Event Focus - NPC action. Who? - Thieves. Event Meaning - Haggle Opposition. The thieves are in their camp when the party arrives. They will try to get the PCs to help them.


day 11. Above ground, the ruined monastery is just a jumble of toppled columns and crumbling walls. Three tents are visible, pitched against one of the larger walls still standing. A young man in tattered leather armour sits outside the tents over a cooking fire. He grabs a shortsword and stands as he notices the elves approach, though it's clear he hasn't much fight left in him.

Oighonlaer whispers for his companions to hang back. He lays his spear on the ground and approaches the man slowly, with open hands. "Friend," says he, "you've no need of weapons. We are here to help."

After a few moments hesitation, the man lets the sword drop weakly from his fingers, then sinks to his knees, weeping. The elves approach and bid him good courage. Debinvarr offers him a drink from his waterskin.

Just then a woman stumbles from one of the tents, leaning on a broken spear. Her simple travelling clothes are stained with blood, she has her left arm in a sling, and there is some sort of gangrenous infection spreading from her left shoulder upwards towards her face.

After some awkward introductions and allaying of suspicions, all are gathered around the fire. The sick woman, a fledgling wizard named Aldira, tells the following tale:

"There were six of us, headstrong all and in search of fortune and glory. How we got tangled up with that sorceress, Siorighan, I'll never really understand. But in the end we had amassed a terrible debt, owing 3500 silvers to the Duc de Val d'Oine, borrowed for a scheme that... well, that didn't go to plan. We had nothing with which to pay him, and it looked as though we were going to end up in his dungeons. Siorighan stepped in, and offered to pay the debt for us, provided that we give her the proper assurance that we would indeed repay her: and by that she meant accept her geas.

"And so the longer it takes, the more desperate we are to find the money. Finally, things got so bad that we let Fr. Biölning talk us into stealing a holy relic. He is -- or was -- a priest of the mighty storm god from across the sea, so it wasn't blasphemy against his own gods, he said. But the gods have surely cursed us for our sacrilege. And the crown was a fake as well! So we came here, hoping for plunder.

"Disaster has followed disaster. We have found very little treasure. Una, Biölning, and Nell are dead. Yrene and I are dying. And still we can think of nothing but another foray into the crypts. Do you truly mean to help us?"

I generated the NPC party according to the D&D Basic rulebook, again replacing Elves and Halflings with 0-level fighters to suit the setting. There were (1d4+4=) six of them ; the first (1d6=3) three being injured, the rest dead. The injured ones each got 1d10 damage, and made a saving throw vs. poison to see if they were diseased from fighting a certain monster (more on this in a later post).

I put an X in two random squares on the graph paper that will become the dungeon map to indicate where the two missing thieves (Nell & Una) fell.

They all have mundane equipment, and each get treasure type U & V. I rolled shite for their treasure:

Nothing useful to give, but they have extra food in the camp. Una also may or may not have a spellbook, should her body be discovered.