"I'm not sure this is something we're meant to be involved in," said Oighonlaer to his companions as they hurried north through the forest.

"I think Eril is nice," replied Miolla. "Not like the other humans."

"What about the Merchant?" asked Caerindíl, "She gave us all this food for--"

"I don't trust any of them," interjected Benyithelnol derisively. "That vampire had better have some useful information to trade for the crown, or she'll be sorry!"

Setup: unmodified - set out towards Castle Vyljusz on trail of thieves

characters: Neldir, the Elders of the Elven Forest, Eril the Vampire, Ranwitha the Pious Merchant, thieves

threads: find Neldir & the book
get item for Vampire
track down thieves 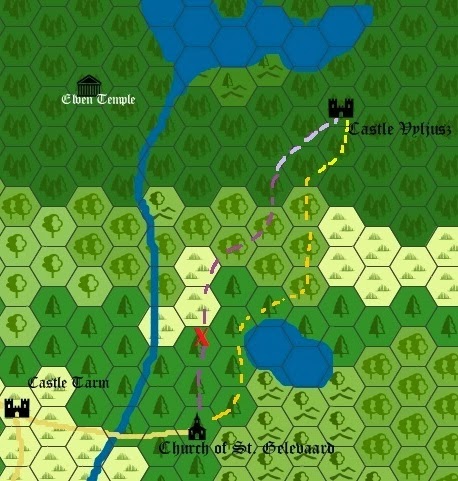 The party's route is shown in purple, the thieves' in yellow. The slight colour changes mark the beginning of the second day's travel. The thieves are a day ahead, so were not overtaken.

The red X marks the site of a random wilderness encounter, which became the party's first combat.

Whilst making a forced march northwards, the PCs meet 5 unwholesome-looking toughs in a clearing. [random encounter: NPC party, rolled up according to the Basic rulebook, equipped according to the d30 Companion. Gender=1,3,2,2,3; all male. Reaction = 2: hostile] The toughs take one look at the elves stepping into the clearing, and wordlessly draw their weapons. The battle is joined!

I have an excel spreadsheet that rolls stats by the dozen, so:

There's no surprise. I rolled individual initiative. This is the first combat, so I recorded it a little more exactingly than I (probably) will in the future.

6
Caerindíl attacks the Dwarf, rolls 5+1, miss.
5
Fighter A attacks Lycinia, rolls 1+3, swinging his greataxe several feet short of his intended target.
Fighter B attacks Debinvarr, 6+3, faring little better than his compatriot.
Fighter C attacks Miolla, 11+3; she deftly sidesteps the blow.
4
Benyithelnol attacks the Cleric, 7+2, missing.
Oighonlaer attacks Fighter A, 3+0, his spear thrust doesn't even come close
2
Miolla attacks Fighter C, 2+3, miss.
Debinvarr flashes in front of Fighter B, 5+0, who is not at all impressed.
Lycinia attacks Fighter A, 11+2, who fails to dodge her sword stroke (she only hit due to his DEX penalty).  The blade opens his stomach, and he falls (damage 9, brings him to -2hp).
Dwarf attacks Théscine, 12+2, his hammer glances off her shield.
Cleric casts Command on Benyithelnol. "Flee!" (Benyithelnol has 1 hit die and INT 9 so is not allowed a saving throw) He runs out of the clearing.
1
Théscine attacks the Dwarf, 11+1 miss
Firdeth attacks the Cleric, 13+1-2(rapier vs. chain), but her thin blade cannnot penetrate his armour.

6
Caerindíl attacks Dwarf, 15+1, spearing his shoulder for 7 damage (Dwarf reduced to 3hp)
5
Fighter B attacks Debinvarr 7+3, but can't find an opening.
Fighter C attacks Miolla 11+3, who once again is always just outside his reach.
4
Oighonlaer attacks Fighter B, 19+0, delivering a nasty blow with his spear for 4 damage (Ftr B reduced to 2hp), but his opponent grits his teeth and snarls back in defiance.
2
Miolla attacks Fighter C, 17+3, not landing the blow she had hoped for, but her great strength assures that it is quite palpable: (1d8+2=)3 damage, reducing Ftr C to 2hp)
Debinvarr attacks Fighter B, 15+0, his rapier cutting for 1 damage (FtrB down to 1hp)
Lycinia attacks Cleric, 16+2, her blade cutting through his armour. He takes 6 damage (to -1hp), and sinks to the bloody forest floor
Dwarf attacks Théscine, 18+2, his mighty warhammer crashes down upon her brow. She crumples before him, mortally wounded (7 damage reduces her to -3hp; she will die in 1d10 minutes unless healed)
1
Firdeth rushes to attack the Dwarf, 10+1, but is unable to avenge her friend.

6
Caerindíl attacks the Dwarf, 11+1, missing.
5
Fighter B attacks Debinvarr 16+3, who falls under the onslaught to lie broken in the underbrush (8 damage brings him to -3hp, mortally wounded; he too has 1d10 minutes to live)
Fighter C attacks Miolla, 17+3; He catches her with the tip of his sword, biting deep into her side (only 2 damage, but it's half her hit points)
4
Oighonlaer attacks Fighter B, 3+0, who effortlessly knocks away the head of his spear
2
Miolla's riposte against Fighter C, 19+3, shatters his ribcage (6 damage reduces him to -4hp; he is killed outright).
Lycinia attacks Fighter B, 10+2, missing
Dwarf attacks Firdeth, 14+2, a solid hit does 5 damage (reducing her to 2hp).
1
Firdeth, still wincing from the pain, counter-attacks the Dwarf, 18+1, her rapier slashes him across the throat for 4 damage, removing him from the fight (reduced to -1hp)

6
Caerindíl attacks Fighter B, 4+1, or rather tries to, but the man keeps knocking his spear away
5
Fighter B steps in to attack Lycinia 9+3, but she parrys his swing
Fighter C attacks Miolla 11+3, who is still too nimble for him to land a hit
4
Oighonlaer attacks Fighter B, 1+0, but nearly drops his spear in the process.
2
Miolla attacks Fighter C, 4+3, in avoiding his sword she hasn't come into striking distance herself, either.
Lycinia attacks Fighter B, 20+2, who raises his sword in a last desperate defence. Her mighty swing cleaves through the metal of his blade, his leather armour, and finally bone; 8 damage brings the fighter to -7hp, killing him instantly.
1
Firdeth attacks Fighter C, 8+1-2, scraping the point of her rapier against his mail, to no effect

round 5 (morale check rolls 3! Fighter C fights to the death!)

6
Caerindíl attacks Fighter C, 20+1, the point of his spear doesn't penetrate the mail armour, but the force of the blow nearly knocks the wind out of him (1 damage, reducing him to 1hp)
5
Fighter C attacks Miolla wildly, 1+3, missing
4
Oighonlaer attacks Fighter C, 10+0, but is unable to connect
2
Miolla is wounded and so drops back out of the fight
Lycinia attacks Fighter C, 18+2, a flash of steel and it's all over, as the final enemy falls bleeding at her feet (4 damage, leaving him at -3hp, mortally wounded).

Meanwhile, the rest of the PCs are looting the bodies.

Treasure: I rolled on the Classed NPCs: Quick Magic Item Determination tables in the d30 Companion for each enemy, treating an inappropriate result as Nothing; so between the five of them there's a single unlabeled potion (to be determined on table POTIONS I)

Q: Did the thieves also make a forced march? Likely: 11, Yes +Event
Event: NPC Negative - Eril: Persecute Illness (Eril has been forced to leave Cheapington -- run out of town by torch-wielding peasants -- though the PCs won't know this until they go back there.)

There are no further encounters on the way to the castle. 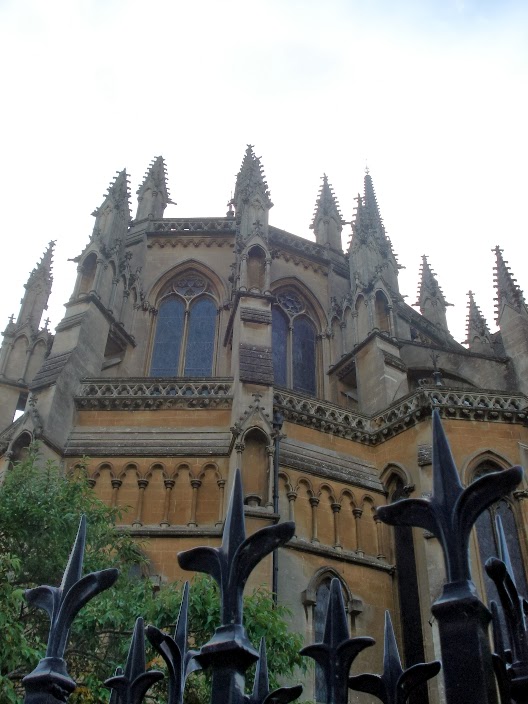 Castle Vyljusz is round keep, with 9 levels. Most of the keep is old and well-worn, but shows some signs of newer construction. Its owner, Siorighan, is an aristocrat, though untitled. She is also a 12th level magic-user, whose personality can best be described as prim & proper. She's not from this part of the world, nor were the original builders of the keep, though it is not thought that she has any connection to them.

The elves approach the soldiers guarding the portcullis, who turn out to be (reaction=9) talkative, and allow them to enter. They are received by the Major-domo (apprentice, MU2; temperament: Obliging; reaction (best 2 of 3d6, since he's obliging): 10).

The magic-user is intrigued at a party of noble elves showing up at her door. She invites them to stay the night, and provides them with a sumptuous banquet in her great hall. The conversation naturally turns to their quest, which the excited elves recount to her in turn, perhaps a little too freely. Siorighan owns that she has the Crown, and patiently listens to Oighonlaer as he explains why he and his fellows need it.

"I understand your predicament," she says, "and I would like to help you, but I'm afraid I cannot just give you something for nothing. Now, I'm not after any sacred relics -- far from it! These thieves brought me the Crown of their own initiative. They owe me a great deal of money, you see, and they hoped the crown would pay their debt. The fools didn't even examine the crown before they took it, or they'd know it was almost worthless. They've set off already on another ill-advised scheme. They're headed south to some ruins, which are said to be haunted, and of course full of treasure. If you want the crown, go after them. Either help them or kill them, I don't rightly care. But either you or the thieves bring back 3500 silvers worth of actual treasure to pay their debt. Then you may have the crown. But you look tired from your journey, and some of you are injured. Please enjoy the safety of my castle whilst you rest and recover. Let me know your answer to my proposition before you leave."

The elves are allowed to rest for 2 days at castle to recover all lost Hit Points.
They trade a 100sp gem to have their potion identified; It's a potion of ESP.

Since the castle counts as civilisation, it is time to award XP for monsters slain and treasure recovered.

They also pick up a rumour from Castle Vyljusz's soldiers.
Type: location - region
Bibliomancy: ipsae lacte domum referent distenta capellae / ubera nec magnos metuent armenta leones;
(Vergil: Ecloga IV, 21-2)
(the she goats will return home, udders distended with milk / and the herd will not fear the great lions)
Interpretation: there are no dangerous wild beasts in the region around the castle. I will check for the truth of this rumour should a random encounter be indicated within 3 hexes of the Castle.