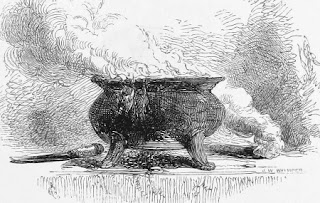 Using pictures as random idea generators is hardly a novel idea. Sites like Meanwhile Back in The Dungeon...  and Build a Dungeon from Me have been offering up plenty of gaming  inspiration for a while now, and I've even stumbled across random idea websites for writers that offer up stock photos as writing challenges.

I've got a ton of old woodcuts & engravings & illustrations saved on my hard drive, and have started using some of them to illustrate my T&T Katabasis adventures, in the same way that I was using photos I took to illustrate LotFP. This is all well and good, but time consuming. Finding the right pictures to go with the story can often devolve into hours of flipping through pictures. I'll do this anyway, but it's nicer to do when you aren't constantly asking yourself, 'did my PCs just go there? How about there? Would it work if I photoshop out the car? &c'. I mostly have all the Greek woodcuts in one place, but even then only a small fraction of them are suitable for adventures: too many famous people. I sorted out a likely collection to put in my T&T folder, but I was still mostly playing the adventure and then looking for pictures that fit.

It occurred to me it would be much easier to do it the other way round. Not all the pictures I have are particularly useful for RPG adventures though, so some sort of system was going to be necessary. 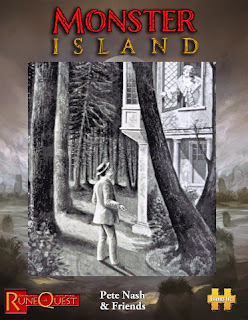 Build a dungeon from me. I dare you.

The idea for the new campaign came to me as I was idly messing about with GIMP to turn a picture of Misenum into a mountain city. I realised I could set a high-fantasy campaign in such a place quite handily. And since it was a civilised environment, there would be a lot less combat. Of course, the city has to be somewhere. So what is surrounding it?

Organisation is not my strong suit, but in the main woodcuts folder I have a subfolder for landscapes and cityscapes, and also one for ruins. I went through them (and a few others) and pulled out everything that seemed like it would make for a good adventure location. I also grabbed a bunch of pictures of monsters that would make good wilderness encounters.

What I should have done at this point was start organising all the stuff I was putting in the new campaign folder, but I didn't. I exhort you to learn from my mistake and sort everything you find into folders as you go. You can always make more, and delete empty ones, or combine small ones later.

Next came NPCs. There are pictures of people spread all throughout the woodcut folders. I had already been leaning towards Runequest, so I pulled out all the ones that suited a pre-medieval feel and/or were interesting enough that I could justify their inclusion. Somewhere at this stage I found the pictures that inspired my main PC, and three people who are either subordinate PCs or major NPCs. I made sure to include some random groups of minor / incidental / cannon fodder NPCs as well. 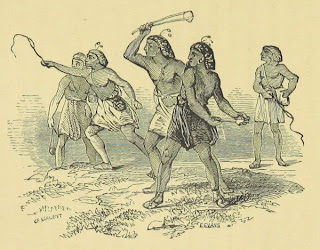 You're the best 1d6 friends a guy could ask for!

And now the game world was taking shape by itself... but more on this later.

At this point almost everything has been sorted into folders for the actual gaming. I'll be using Mythic with Mythic Variations for my GM emulator again. But when it comes up with stuff like Remote Event or New NPC, I'll just go into the appropriate folder and pull up a random picture to figure out the result. Some of the pictures I've named or even photoshopped (gimped?) in advance in order to have certain possibilities in the story: monsters I want to use, NPCs related to my character, etc. In theory I could even  make individual folders for all the categories on Mythic's Event Focus Table, but what I have suits my basic story so far. 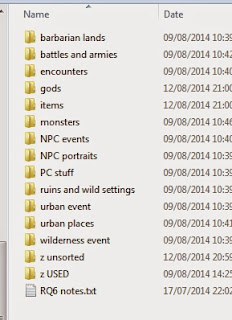 Some of the folders (barbarian lands, battles and armies) are there to keep stuff that I won't be using unless the adventure goes a certain way. Gods and items are small folders to be dipped into primarily when events call for something specifically in them, though they may end up being used randomly as well (the party just met a priest of _____). PC stuff is pictures that look like the characters I rolled up; some of these are just portraits, others have definite encounter potential. Encounters is empty and should have been deleted; its contents got split early on between monsters and wilderness event. NPC portraits is the random NPC generator. NPC event is people actively doing things, urban event and wilderness event are things happening more generally; all three are good for Mythic's Remote events. Not shown here is another folder full of pictures of horned mammals and snakes whose heads will be photoshopped onto other bodies to make pictures of broo (chaos hybrids) and ophidians. 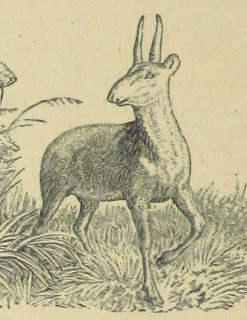 I didn't agonise over where to put the pictures when I was filing or it would have taken forever. Some are probably misfiled, others could have gone in either of two folders equally well. I can move them when I find them, though they may just provide less obvious inspiration when they show up. So I will purposefully not be going through the folders to clean them up. Less prep = more gaming.

In the next post I'll show off the setting, and how I got there.
Posted by Alea iactanda est at 11:34