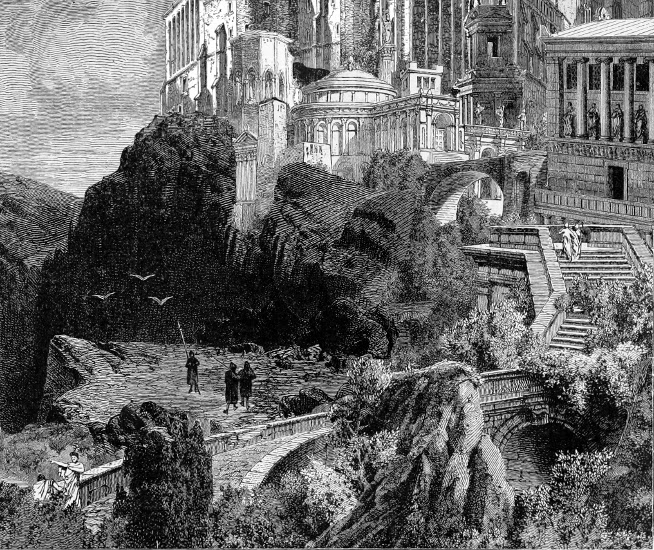 As I said in the last post, the whole of the setting for my new Runequest campaign branched out from the picture above. Here I have a wondrous city of (mixed) classical architecture rising up the summit of a mountain. There's a few trees and some scrub for vegetation.

A good start, but by itself rather vague. So I went through my picture folders and sorted out a bunch of people and places that seemed like they'd be good for Runequest. All the vikings and Germanic tribes and Celts got put to one side, and I was left with classical Greeks and Romans, ancient Egyptians and Mesopotamians, Africans, and a few Arabs. Mostly these came from books on history and anthropology, but there were a few adventure novels thrown in for good measure.

So dividing it up by cultures (RQ style), the European types are Barbarians, the Arabs & North Africans are Nomads, and the rest are Civilised. There's also a bunch of stone age people (truly bons sauvages)  from a rather mad french book on human origins in case I need any Primitive people. There's a lot of pictures that could conceivably fall in more than one category; the boundaries between Civilised and Nomad are particularly fluid, and many priestly types could easily be Civilised or Barbarian. But as a rough guide: 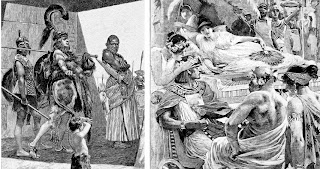 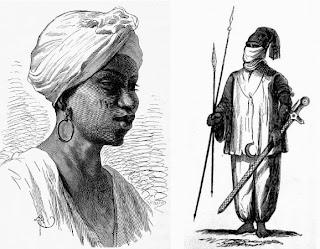 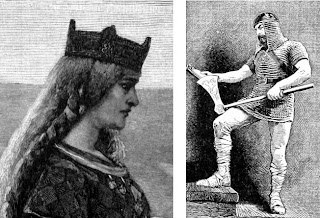 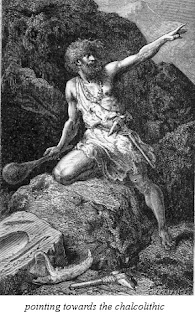 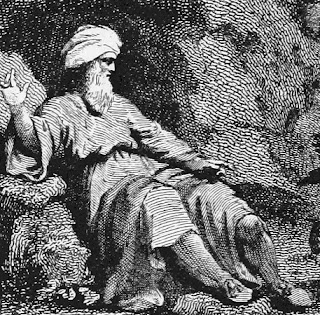 
Most of the pictures of the person(s) that inspired the PC I will make were Egyptian, but everything hinges on them being a citizen of this great city. So instead of dividing up all the Civilised peoples into cultures and giving each one a city-state, there is one big city made up of the remnants of many different cultures to form a single poly-ethnic gens. This will also explain how my PC sometimes looks to be dressed more like a Mesopotamian or Persian. It also lets me use the Greek & Roman warriors for the city's armies, as there is a dearth of good pictures of Egyptian soldiers. 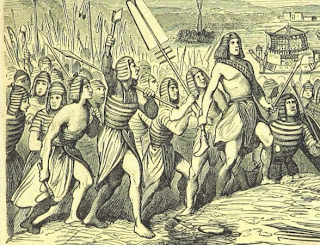 except these guys in stripey PJs

The wilderness locations were similarly mixed: Africa and the middle east with mostly classical and Egyptian ruins. Almost everything is a desert or empty plain. Plus some viking stuff. 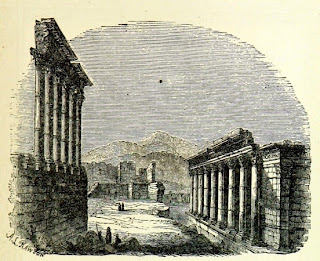 So putting it all together I have a cosmopolitan mountain city surrounded by the ruins of many older civilisations. The remnants of these civilisations now make up the populace of the city, whence their ancestors fled in the time of a great cataclysm where chaos creatures overran the land, about ~500 years prior to game time. There are a few other city states, similarly organised, separated by vast wastelands. Nomads traverse the wastes, taking trade caravans from city to city. Barbarians live a short way across the sea (lots of pictures of viking ships) and occasionally come down to trade.

Between their inclusion in the new RQ rules and stumbling across this picture, I had to put Ophidians into the setting. 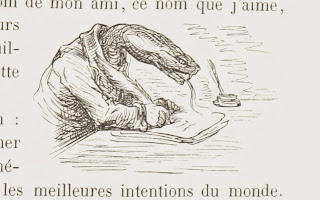 I went for the classic swords & sorcery trope of the serpent people being an ancient and sorcerous race. But instead of making them evil, I instead put a small enclave of ~200 of them in the city. They run the sorcery colleges, and so have inordinate influence in the city. Many view them with suspicion, though they are essentially harmless; just alien. Their major plots and schemes all revolve around sending sorcerers east into the lands that were once the ophidians' empire(s) in quest of lost knowledge -- which could potentially make a nice adventure.

There are broo (chaos hybrids) and other vile creatures in the wastelands. None of them have the might to take on the city. Yet. 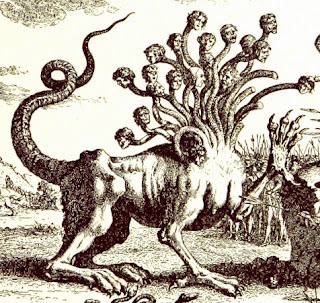 All able-bodied citizens are required to turn out for militia service. [Rules Alert] The default Civilised combat style is Citizen Militia, giving training in shortspear, shortsword, and medium shield with the Formation Fighting trait. There is also a troop of elite soldiers, who train battleaxe, javelin, shortspear, and scutum [Elite soldier combat style]. They eschew wearing armour in favour of better mobility, and so receive the Daredevil trait (May use Evade to dodge blows in hand to hand combat without ending up prone. I chose it for the effect rather than the name). The elite warriors are classed as a Brotherhood (using the default Warband package in the rulebook). 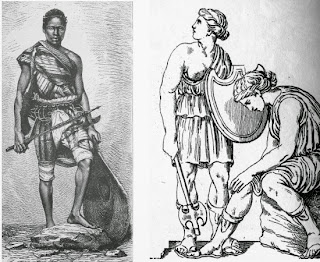 I'm opting for a high-magic setting, with the Ubiquitous Folk Magic rule and overnight regeneration of personal Magic Points (basically, everything like in RQ3). Sorcerous colleges will be all the non-evil seeming ones from the main book and Monster Island. Theism cults will be abundant. The city's Street of Temples claims to have temple, altar, or shrine to every known god in the world. The major religions are the obvious ones, being the list of sample Theist Cults in the rulebook. The most popular/important religions are the gods of the Sun and of Mountains, and the eponymous city god.

To make the gods slightly less generic, I picked random images and assigned the god to them; I'll figure out what they're all like (and name them) as it becomes important. But for now: 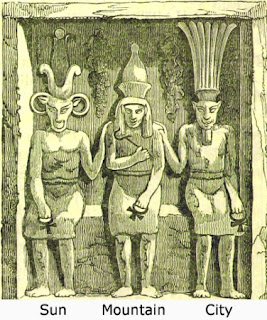 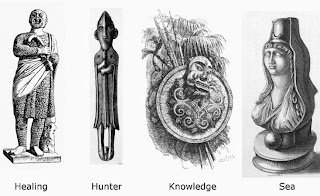 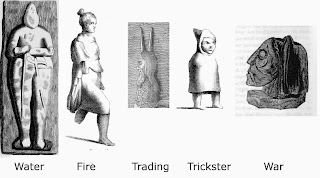 Writing this all down was considerably more time-consuming than making it all up in the first place. I have more setting notes than just these, for certain, but I'll let them come out during play.

Edited to add -- I forgot to mention the name of the place: Anzakàr (Sumerian for tower or fort. The grave accent on the final a is only there to distinguish among homophones in translitteration, but it looks nice for teh name of my fantasy city so I'm keeping it).