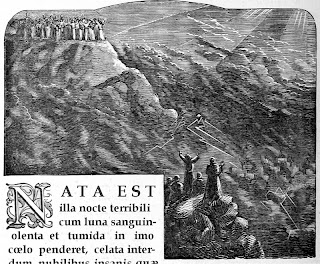 She was born on that terrible night, when the swollen and blood-coloured moon hung low in the heavens, hidden now and again by the unwholesome clouds which held in the damp  heat and the horrid exhalations of the Earth, when the gods, incensed against the populace, sent down unceasing thunder against the city, and smote it with lightning, but refused to let the solace-bringing rains follow after. For though the most pious of peoples, it was said, did inhabit the City, yet had their sins grown in number and provoked this divine wrath. And so she was born on this night of terror, when the affrighted dogs did bay in every street, and the children cry, and that unseen beast slumbering beneath the ground began to stir, vexing the world in its very innards and causing the Earth to tremble. But the time is not meet to talk of such things...

Character creation for Runequest has always been a lengthy affair. This first character took well over an hour. But, after a little familiarity with the rules I was able to roll up two more characters (a priest and a warrior) in about 45 minutes total. I'll go through the first one step-by-step, as parts of the setting came out of it. 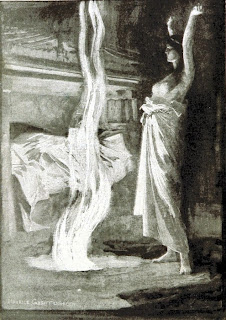 Step 1: The 7 characteristics are Strength, Constitution, Size, Intelligence, Power, Dexterity, and Charisma. For humans, they're all 3D6, except SIZ and INT which are 2D6+6. I roll all the 3D6 attributes at once and arrange them as desired, then roll for INT and SIZ and assign those. The dice were kind:

Attributes are figured values using one or more characteristics. Briefly:

Action Points: 3 (exceptional INT made up for blah DEX)
Damage bonus: +0 (from average STR & SIZ, but 1 point less in either would have given her a penalty)
Experience Modifier: +1 (above average CHA allows her to get more out of others' assistance)
Healing Rate: 3 (above average CON speeds her recovery)
Height & Weight: 171cm (5'7") 80kg (175#) based on SIZ 12, medium build
Strike Rank: 13 (average of INT & DEX; used to determine Initiative in combat)
Luck points: 3 (based on POW; allow rerolls during play)
Hit Points: are by location. I'll look them up when the time comes...

Standard skills: All Runequest 6 characters have the following skills by default. The base value for each is the sum of two characteristics (or a single characteristic x2). Since my setting uses the Ubiquitous Magic rule, the Folk Magic skill is included on the standard skill list. [NB. I made a spreadsheet that automatically calculates base skill percentages. Making subsequent characters took so much less time.]


The next step is to select a Culture. I'd already intended to make a resident of the great City, so Civilised is the only choice. Sorcery is only available to civilised characters at any rate, so this would have been a foregone conclusion in any case.

Technically, the next step is the selection of cultural skills, but it seems wrong to me to pick skills before figuring out background circumstances and events, so I swapped these steps round. So, to start off, a d% roll on the Background Events table:

Background event: 32 - "You have been marked as special by the gods. You carry with you a ... marking that is of great reverence to a particular religion or cult." Picking a random picture out of the gods folder gets a good one for a sorceress: 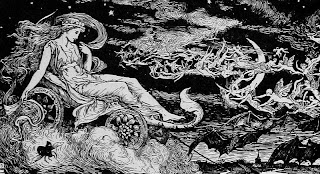 As to the mark: her pupils resemble the current phase of the moon when the light catches them just so.


Social Class: a roll of 97 (!) makes her a member of the aristocracy. The rules say to keep families vague to start with, but as hers seems quite important I'll do a little extra work to make sense of things.

Parents: rolling a 91 on the tables indicates both parents are dead. So who is head of the family now?

Siblings: a roll of 37 gives her (1d6=) 2 siblings. Random determination of age and sex gives her 2 older brothers (1 and 3 years older). The eldest brother is now head of the family, and has inherited the title (Count). He is a soldier-turned-statesman, the younger brother is an infantry officer. 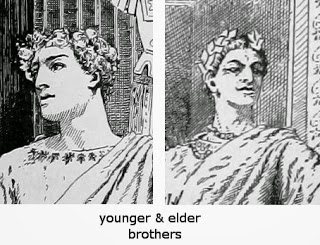 N.B. The younger brother picture is wrong. At some point I realised that person would be better as a different NPC. I'll change the image eventually...

Marriage: an optional sidebar. A character is betrothed if they roll under their base Influence skill, and married if the roll is a critical success (1/10th the skill, round all fractions up). I rolled a 23, so she will be betrothed: an arranged marriage, due to her social status. She's still unmarried (and at her age!) because getting married is not something one can do whilst training to become a sorcerer.

Connections: another astounding d% roll of 99 indicates that her family is well-connected in the city and enjoys some status with those commanding national power. This provides 4 rolls for allies/contacts/rivals/enemies.

Time to rummage through the NPC folder: 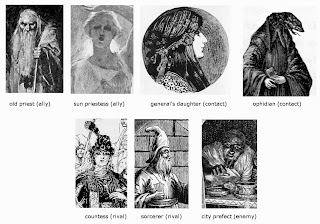 ally - an old priest of the city god, her godfather
ally - a young priestess of the sun, her best friend
contact - the general's daughter, renknowned for her wisdom
contact - an ophidian, her instructor at the sorcery college
rival - a countess, vindictive social-climber
rival -  a sorcerer, from the Hermetic college
enemy - the city prefect, promoted from the ranks and despises the nobility

Culture skills: seven Standard Skills are allotted to each culture, and three Professional Skills are chosen from those allowed. A character may (but is not required to) choose a cultural Combat Style as well. 100 skill points are divided between these 10 or 11 skills, with a minimum of 5 and a amximum of 15 allocated to each. Customs and Native Tongue get an additional +40 bonus. So her skill choices are:

Deceit, influence, and courtesy are important for navigating high society. Willpower is important for navigating her family. Ophidian is necessary for the proper study of sorcery. She has some small familiarity with spear, shield, and shortsword from the militia training required of all citizens. As a member of the aristocracy, a big deal would have been made of her turning out to fulfil this important civic duty.

Passions: each culture provides three Passions, strong feelings which "can greatly assist players and Games Masters in deepening the nature of the character, introducing plot hooks based on a character’s desire or prejudices, and helping the player to understand who his character is, what drives him, and so on". Civilised characters get Loyalty to Town/City, Love (friend, sibling or romantic lover), and Hate (rival, gang, district or city). I thought it would be fun to set up some family quarrels, so her passions are:

She should also have a Loyalty to the Sorcery College, which brings us to the next stage.

Each career has a list of standard skill that may be increased, plus a list from which three professional skills may be chosen. 100 skill points are divided between these, with a maximum increase of 15 in any single skill, but no minimum.

The standard skills are equally as useful in wizard school as they are in her social life. Invocation and Shaping are her spellcasting skills. Literacy is a sine qua non of learning sorcery at the college, and also serves to separate the upper and lower classes.


After career comes Age. The default for characters is Adult, 2d6+15 years old. I rolled a 10, so she's 25. A decent age for a starting sorcerer. I would assume she's only recently graduated from Novice rank. More on this later.

Age determines the number of bonus skill points and the maximum number which may be spent on any one skill (for adults: 150 total, +15 max. increase). One new Professional skill or Combat Style may be chosen, but the rest of the bonus points must be spent on skills currently on the character sheet (i.e. all the Standard skills plus any professional ones gained from culture & career).

Again, skill choices are mostly reflective of her aristocratic background and sorcerous pursuits. Evade is chosen (mostly from a game perspective) with the idea of not getting hit in combat. Stealth is also a good game choice, but I imagine she uses it to sneak out of the house to avoid certain family members.

As an Apprentice member of the Scholastic sorcery College, she is entitled to one sorcery spell for every 20% (or any fraction thereof) of Invocation skill. 62% gives her 4 spells. Since it's a high magic setting, the college provides (potential) access to (1D3+6=) 9 spells. I am using the basic list of seven given in the example and adding two to it. The first of these is Smother. It not only thematically fits with Abjure Breath (which itself is intended to avoid environmental hazards when looking for forgotten knowledge in ancient ruins), but is a decent spell for adventurers generally.  The final spell shall only be revealed as my character sounds the depths of the scholastic mysteries. She also gets 1 folk magic spell per 10% (or fraction) of her Folk Magic skill. 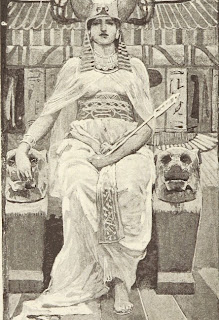 Starting equipment and money are based on culture and social class. As a civilised (4D6x75) aristocrat (x5), she has 6375 silver pieces. A sizable amount to be sure, but she moves in expensive circles, and whatever minor allowance her tyrant of an eldest brother allows her will just barely cover her expenses. In game terms, food and lodgings are covered, but any special equipment or training she needs once play starts will be paid for out-of-pocket.

In addition, she also starts with:
- (1d6+3=) 6 sets of clothing, made of expensive fabrics and sporting lots of decoration
- (1d3+3=) 4 weapons of expensive quality, decorated with precious substances
- a full set of armour worth (1d2+3=)4 Armour Points
- a Palanquin for personal transport 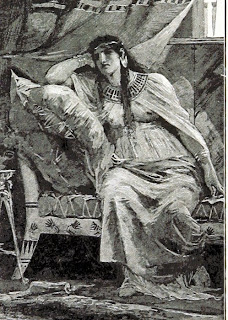 Can I go on an adventure now?
Posted by Alea iactanda est at 20:59

Email ThisBlogThis!Share to TwitterShare to FacebookShare to Pinterest
Labels: let me tell you about my character, Runequest, solo toolbox