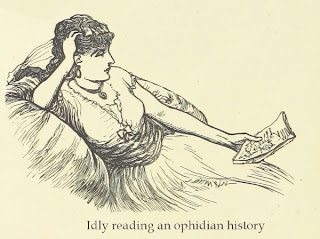 Setup: 3=Altered scene: (was: petulantly receive unknown visitor)
How is it altered? Attach / Riches - her brother is actually handing over the dowry

The next day finds Lachaidiga waiting in the atrium, attired in a tasteful gown and fine jewels. Her brother is in a nearby study, ostensibly attending to administrative duties, though they both are aware that separation is their only chance at avoiding an argument before the guests arrive.

She is idly reading an Ophidian history when her brother walks in with their visitor. The clay tablet nearly falls from her hands when she sees who stands before her. Her brother's broad smile strikes her as particularly malicious.

[Alkinu, the suitor: Imaginative, Foolish, and Determined (from Rangen)
He's an elite soldier (Note to self: rq_Lunar_Foot_Soldier.pdf #1 for stats)]

"Dear sister, our visitor has arrived. I trust your intended needs no introduction!"

"Oh! what a surprise. I... I hadn't expected him so soon. Not after the tragic events of our last guests' visit. I do so hope this visit doesn't end in another brutal murder."

"Sorry. I meant, it's just such a strange thing to happen here; I can't quite stop thinking about it. I'm sure rumours of the event have already spread throughout the City. Now that you're here, Alkinu, you'll of course be wanting to see the crime scene. The blood-stains are truly a thing to behold."

"Dear lady," begins the suitor. "I confess that rumours of that shocking event have spread far abroad. I can imagine how dreadful it must have been for you. Enzzal, you should not be cross with your lovely sister. This is so much for her to bear!" 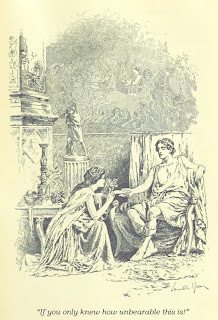 "Oh, indeed." says Lachaidiga, "if you only knew how unbearable this is!"

"Come," interjects Enzzal hastily. "It is a fine afternoon. Let us stroll in the garden."

[Q: What does suitor try to talk about? Using UNE, his bearing is certainly Friendly. Rolling for the topic produces Shelter - Flaws (The friendly NPC speaks of a Shelter for your Flaws.]

"O sweet Lachaidiga," says Alkinu as they pause to enjoy the shade of a palm tree, "I must speak frankly. I am not so naïve that I think you have no misgivings about our match. No, I have spoken with your brothers many a time, and I am fully aware of your temperament and behaviour. I know how spirited you can be, but I am certain that matrimony will have a much-needed calming effect. But know also, that my great affection for you shall not diminish should you fail to overcome your silly impulses now and again, and I shall always be there, in our home, waiting to receive you once again in my tender arms and give you shelter from the troubles you've wrought."

"Oh, Alkinu, that's so sweet of you. I am glad to know that you shan't turn me aside, even if I, in my delightful foolishness, start studying the forbidden paths of necromancy. What a relief to know you'll always take me back, and hold me close, and pat my silly little head, even if I run home reeking of corpses!"

"Lachaidiga, stop it! Why must you always try to ruin everything for our family?"

"Now, Enzzal," interjects Alkinu, "I'm sure your sister is just displaying her... her high spirits. You should not be angry with her for jesting."

"I should like to remind my dear sister that there is such a thing as taking her jests too far. Need I remind her of the... unpleasantness she caused in the house of Gulin-oryix?"

"Oh, do tell. I'm sure Alkinu would be fascinated to hear how they found me in the anteroom with--"

"That is quite enough! Come, let us change the subject. We shall repair to the atrium, so I may have the servants bring forth the chest with my sister's dowry."

"Dowry?" asks Lachaidiga, "Dowry?!" It's all settled then. No one needs my input! You've worked it all out amongst yourselves! I hope you've not gone and given him the good silver. It would bring such shame on the family if you had to eat off copper plates!"

Lachaidiga storms back into the house, leaving her furious brother and the bewildered suitor in the garden staring after her. 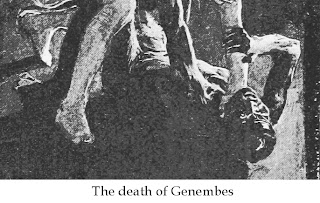 The night before, Genembes was murdered, in the same fashion as the barbarian. What did he find out that got him killed? The news has not yet reached the ears of our heroine. Not until--

Setup: 6=Interrupt: (was: sneak out of house)


That evening, after the embarrassed departure of Alkinu, a squad of soldiers arrives at Lachaidiga's home. They post a guard at all the exits, and the remainder begin to search the house. Lachaidiga and her brother, Enzzal, are brought into separate rooms and questioned about the murder of the barbarian prince, and the previous night's murder of Genembes. Lachaidiga is dismayed to hear of his death; she counted him a useful ally and even felt a nascent friendship, despite his connection to the prefect.

[This scene was mostly Mythic questions...
Q: Are they after anything specific? 50/50: 04, exceptional yes
Q: What? Gratify / Exterior factors. In the name of "procedure" the prefect is abusing his authority because of his enmity towards Lachaidiga and her family. This is harassment plain and simple, but the law is on his side at the moment.
Q: So how does this go down? Create / Legal matters. Interpretation: the two siblings must appear before a judge in 1d6=4 days from now
Q: Are they under house arrest? Likely: 83, yes.
Q: Do guards turn away all visitors? 50/50: 19, yes.
Q: Does anything happen in the interim? 50/50: 13, Exceptional Yes on day (1d4=)4. (see sene 11)]

Lachaidiga and her brother spend four miserable days cooped up in the house together. They do their best to avoid one another's company. The prefect's soldiers are an omnipresent distraction. Enzzal spends much of his time watching them rifle his office, and the remainder preparing a formal complaint against the prefect. Lachaidiga mostly sulks.

Setup: 1=modified: (was: go before judge)

altered: released & sent home almost immediately since the murder happened when they were under heavy guard


Finally it is time for the siblings to go before the magistrates. When she emerges from her room in the morning, Lachaidiga assures her brother that she understands the gravity of their situation and will be on her best behaviour -- at least until they return home.

They move through the streets with great pomp, wearing their finery, borne in separate litters and surrounded by a flurry of attendants; consequentially the soldiers ordered to accompany them seem cast in the rôle of an honour guard rather than gaolers.

As the siblings are ascending the gleaming white steps of the court, flanked by soldiers, a young scribe rushes out to meet them, bearing a scroll. "My lord, my lady," says the scribe, "I'm sorry you had to come all the way here. The enquiry against you has been dismissed. New... evidence has come to light. Another barbarian was murdered last night, when you were both... both at home. The prefect wishes me to convey his sincerest apologies for any inconvenience you may have experienced. You are no longer... required to remain in your dwelling." 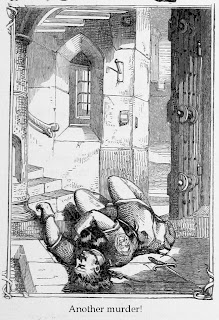 "A passing labourer," continues the scribe, "stumbled up on the unfortunate scene last night around the sixth hour as he was visiting... a disreputable establishment. He heard an altercation, and was fortunate that the assassin did not see him."

"Please," asks Lachaidiga, can you tell me why this is happening? I don't think I shall ever sleep again until the murderer has been caught. I keep worrying that they will come back to our house."

"I probably shouldn't be telling you this," says the scribe, "but to allay your fears, lady. The victim was another barbarian, and another initiate of Ylhoon as well. The daggers they carry are quite distinctive, with bands of sliver, gold, and copper circling the hilt. you've nothing to fear, my lady -- unless you decide to join that cult."


[Mythic and other questions which put this all together:
Q: was victim another barbarian? Unlikely: 13, Yes.
Where was he found? Red light district (randomly, from Cities)
Found by? a passing mason (rolled as an encounter out of Cities)
When? at 1d12= 6th hour of the night (~11pm)

Clue: Expose / Goals
What is the exposed goal? vengeance
How are the barbarians related? weapons]

Setup: 2=modified: (was: go home and sneak away from brother) 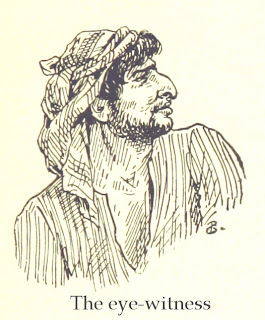 As the siblings are returning home, a man runs up to Lachaidiga's palanquin, dodging past her servants. He is kicked into the dust by a guard.

[what does he want? (using UNE's conversation module) bearing: knowing - account - antagonist: "The knowing mason has an account of the antagonist"]

"My lady," he pleads, "I have important information for you about the murders!"

Lachaidiga motions to her servants to help the man up. "Tell me," she says to the man, "and quickly, lest my brother sees you!"

"Last night in a dark side street I saw the barbarian arguing with a man in a dark hooded cloak. The barbarian pulled his dagger -- that's when I hid; I didn't want the mad brute coming after me. He shouted something I couldn't understand about death and chaos and then there were sounds of a fierce struggle. The barbarian screamed out 'Why won't you die?', and then I heard a body hit the ground and a weapon skid over the cobblestones. Then running footsteps. Beshshukar be praised! they did not come in my direction, or I'd not be alive to tell it!"

"Good sir," says Lachaidiga, "take this ring as my token. If you hear anything, bring it to my home to gain entrance. If you are in trouble, use it a sign of my pledge. If you are detained by the authorities, I will obtain your release. If you are captured by the malefactors, I will pay your ransom. Return it to me when this is finished for your reward. My servant will give you some money now -- you may need to go into hiding."

The man accepts the ring and a small handful [2d6=11] of silver coins, and disappears into the crowd.

Lachaidiga mulls over the man's words as her litter makes its way through the bustling city streets. "I am starting to believe," she thinks, "that our murderer may be -- undead!" 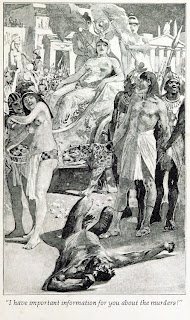