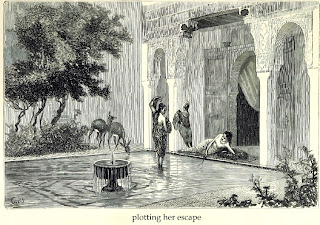 Note: After the last scene, some definite directions to the mystery have begun to gel in the GM side of my head (which the player side cannot yet know, as it were). There are at least two possible directions this could take based on the contents of my random-idea-PC-pictures folder alone. I need to acknowledge that the subconscious pull in either or both of these directions will be influencing my interpretation of Mythic events. That said, these are just a handful of events; the deeper meaning of the mystery is still unfolding.

Setup: 2=modified: (was: go home and sneak away from brother)

interrupt: PC Negative: Attach / Military - the prefect is keeping the house under guard for their 'protection'


Lachaidiga and her brother are surprised to see a unit of the prefect's soldiers follow them home. The sergeant explains that the prefect feels there may still be some danger to the family, and the soldiers are here to protect them. If the sergeant is aware that the prefect is really only sending her unit to harass the siblings, her face does not betray it.

Lachaidiga spends most of the afternoon pretending to read in the garden whilst she plots her next move. As a test, she sends one of her servants with a letter to deliver to her dear friend, Nillath, the priestess of the Sun. She is irked when the servant reports back to her, saying all outgoing correspondence is being intercepted and read by the sergeant. She decides that drastic measures will be required.

That night, Lachaidiga is finally alone in her room. She changes into a more sensible dress, puts on her leather sandals, and throws a dark, heavy cloak over her shoulders. Almost as an afterthought, she puts a bronze dagger at her belt -- just in case.

She extinguishes her lamp, and lets the darkness settle over her. She then traces strange patters in the air with her fingers, and intones the ancient words of a magic spell. suddenly she is aware of all her surroundings again, as if she can see, or rather, feel them all in the darkness. [She successfully cast Perceive (Darksense). This will give her echolocation like a bat (or Gloranthan troll). She hasn't augmented the spell in any way, so it will have its default duration of her POW (17) in minutes. The casting costs a single magic point.] 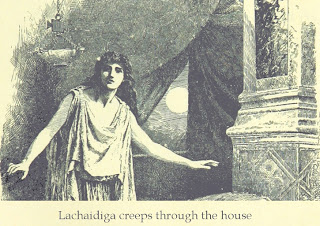 Now that she can move through the house without light to give her away, it is time for the most daring part of her plan. She pushes her bedroom door slowly ajar and peeks out into the corridor to see if any guards are present. A young soldier stands at attention not far from her door. He looks bored, but awake. She speaks the words of a much simpler charm, and without pausing to see if it works, strides purposefully out into the corridor. The guard mere stares at her, too confused to move or speak.

[She cast Befuddle on the guard. Her folk magic skill (31%) roll needed to not only succeed but also win an opposed test against the guard's Willpower (53%). She rolled an 06 (success) vs. his 68 (failure), so the spell took effect.

To sneak out of the house, Lacahidiga now needs to succeed at (1d4=) 1 stealth roll. She rolls an 18, success. I was convinced she'd have had to spend a luck point by now!]

Lachaidiga creeps through the house undetected, and finally escapes out a kitchen window. She hastens away through the streets, unsure of how long she has before her absence is reported.

[despite a string of rolling 'No Encounter' on the tables in Cities, I finally roll something else (on Wealthy quarter, lesser street, night): Major Personage. I then grabbed a random picture in the NPC file. It didn't automatically suggest a background so I rolled on the Occupational Background - Noble table and got Orator; I can work with that. 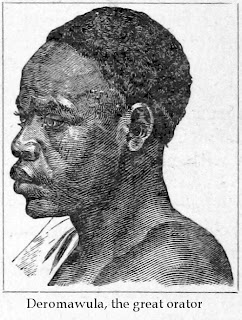 Rolling a reaction on the Legend table produced: 'Unfriendly. Encounter is angry for some reason and Influence rolls needed to turn the situation into a Neutral encounter'. Influence (63%) roll = 51, success.]

Lachaidiga is almost running through the streets. She turns a blind corner and in her haste nearly barrels into a man coming the other way. She stops short, suddenly aware of the four very large bodyguards accompanying him. By the light of their torches, she is able to recognise him: Deromawula, the greatest orator in Anzakàr.

"What nonsense is this!" exclaims Deromawula in his stentorian voice.

"A thousand pardons, my lord," responds Lachaidiga. "I had not expected to encounter anyone on the streets at this hour."

"And well you should not, lady. And yet of late the streets are crawling with soldiers. Prying, uncouth, ill-bred soldiers, who detain persons without the slightest provocation, keeping them from their homes until the sunlight is but a distant memory. It is getting so an honest person cannot go about their daily business!"

"Oh! How I understand! They have caused us no end of headaches. And they don't seem to have a single lead to go on. I don't suppose you've heard anything to the contrary, have you?"

"One of the soldiers told me that the murdered barbarians were all sworn initiates of Ylhoon, and had come to the City to expose an evil death cult in our midst. 'Then why are you stopping me, who is neither barbarian, nor Ylhooni, nor death cultist?' I asked. The fool could not even think of a response!"

"Are they sure it's a evil death cult the Ylhooni are after?" asks Lachaidiga. "Their reputation for fanaticism does so overshadow any hints of reason."

[using the UNE conversation emulator to generate his response: hostile - rage - allies. Way too many Mythic questions followed in order to make a response that fit the context of the adventure; 'Intolerence/Bureaucracy' was what made it all fall into place.]

"For once," responds the orator, "the Ylhooni are in the right. I hear that the cult has threatened to topple the priesthood of the great temple of Anzakàr, and maybe others besides. I hope your family is not too close to this -- I know you have close connections."

"Have you heard something? Did the soldiers say anything about specific threats? Where are they? I should talk to them!"

"Shouldn't you be home in bed, young lady?

Setup: 3=modified: (was: run to Nillath's house to see if she's ok)


Taking her leave of the great orator, Lachaidiga runs through the city streets towards the house of her friend, Nillath. She espies no one en route, save for a small pack of scrounging dogs fighting over scraps [random encounter]. She slows her pace to walk by, and passes harmlessly.

Nillath's home is dark, as are most homes at this late hour, though a single door-keeper sits on the porch, guarding the house and tending the flames of the sacred Eternal Lamps which mark the residence of every initiate of the Sun Temple. The old door-keeper is startled out of his solitary contemplations when he sees Lachaidiga running towards him.

"My lady," he exclaims, "what are you doing abroad at this hour? and alone?"

"Please, Iqqesh," she says breathlessly, "I need to see Nillath. I must speak with her."

"I am sorry, Lady Lachaidiga, but she is not at home."

"Yes, she has very important duties there."

"Lady Lachaidiga, please tell me what is the matter...?"

His words trail off, as she has already set off at a run into the darkness. "Evil cult or no," she thinks, "the Sun temple is one of the safest places in the city. Nillath will be out of harm's way as long as she's there. Maybe it's time to pay my old friend Udzar-sippuk a visit." 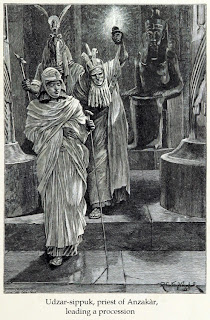 Lachaidiga has known Udzar-sippuk since she was 12 and he 16. He came to her house as one of the attendant novices when her godfather, a hoary old priest of the Temple of Anzakàr, came to call. He is now a priest of Anzakàr in his own right, and lives in his family's modest residence near the gates to the upper ward [i.e. in the less affluent part of the wealthy quarter. His social standing is Gentry rather than Aristocracy.

When Lachaidiga reaches Udzar-sippuk's home, she is delighted to see light coming from within. A servant allows her entry, and Udzar-sippuk comes to meet her.

"Lachaidiga!" he exclaims when he sees her, "What brings you round at this hour? You look terrible. What's wrong?"

"I just mean you're all dishevelled and agitated. Come, we can talk privately in here."

Udzar-sippuk has the servant bring a jug of wine, and then gives orders that they are not to be disturbed. Feeling restored by the sweet liquid, Lachaidiga recounts the events of the past few days to her friend. He listens attentively, saying nothing.

"...and since Nillath is safe I thought I should come to warn you. And maybe ask for your help."

[Influence roll: 02, Critical success. He joins "party"; he will now count as a PC for Mythic purposes, and be put on the NPC list if they part ways. He's one of the characters I rolled up, so it will be nice to use him. 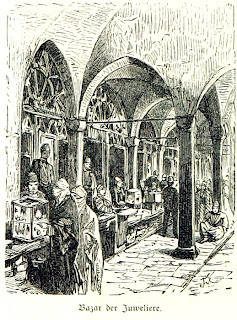 Udzar-sippuk contemplates her words carefully for a few moments. "Of course," he says, "I will help you. How could I otherwise? Even were we not old friends, it is in the best interests of Divine Anzakàr that this evil sect be obliterated."

"Some day, my dear, I will explain to you why that is an erroneous dichotomy."

Lachaidiga throws her arms round Udzar-sippuk's neck and draws his face close to hers. "Holier priests than you have tried!"

The unflappable priest stares straight back at her. "And I suppose you're more easily convinced of sacred truths by your precious Nillath?"

Lachaidiga pulls back in mock indignity. "Hmpf! You've won this round, holy man. Now, lets see how you fare against a lesser evil." 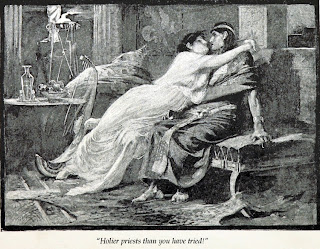 
Udzar-sippuk leads Lachaidiga through the streets to the merchants' quarter to the jewellers' market, a long narrow street of tiny shops and covered stalls. Aside from the the occasional patrolling watchman, the street is in absolute stillness.

[Q: Is anything unusual happening when they arrive? Unlikely: 36, No.

"This shop here," says Udzar-sippuk, "recently changed hands. Nothing unusual there, but the new owners are a bit... off. One of my colleagues was in there looking for a birthday gift for his daughter, and was a bit surprised to see no images of Nuriu [the earth god] anywhere in the place. Tell me, have you ever known a jeweller to neglect the divine source of their wealth so?"

"And he thought he caught a glimpse of the death rune under the proprietor's robes."

The pair conceal themselves in an alleyway across the street from the suspicious jeweller's shop and watch to see if there are any nocturnal comings and goings.  They are both shivering from the cold night air, and fatigued from the late hour. After about 10 minutes of their stake-out, Lachaidiga turns to the priest and says, "We've been here for hours and there hasn't been any movement at all. I doubt we'll see anything tonight. Perhaps we should investigate in the daytime."

Udzar-sippuk readily concurs, and the two make their way back through the empty streets to his residence. 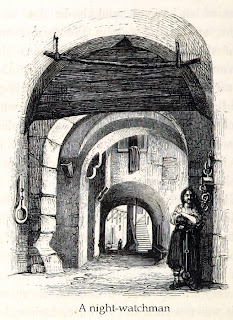