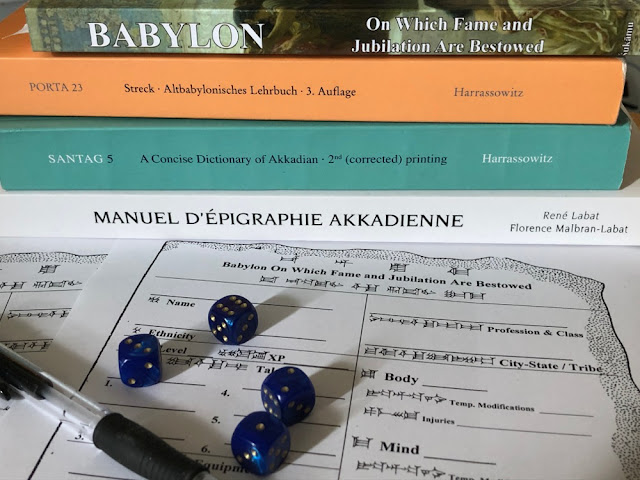 So I've been meaning to get a game of Babylon on Which Fame and Jubilation Are Bestowed going since I bought the 1st edition, but as usually happens in my attempts at historical gaming, I get too caught up in research to get beyond character creation. I do have 8 PCs rolled up for first edition, and I will be converting them to the new system (a simple task, to be sure) at some point, but for the purpose of this post I wanted to start afresh with a brand new PC, or rather finish the one I started in my previous post.

I'll take the steps in order. The first thing to do is determine the Attributes, of which there are three: Body (zumrum), Mind (ṭēmum), and Soul (bāštum). Body is for all physical activities, Mind is reason, perception, memory, and learning, and Soul is charisma, intuition, and boldness. Starting characteristics range from 1-6, and there are two methods of determining them. One could either distribute 12 points amongst them, or else roll 4d6 discarding the lowest and arranging as desired.

I couldn't resist rolling for it, and got 3,6,2,1. Discarding the 1 gave me the following attributes:

I already had an idea in mind for the character I wanted to make. He's a pretty unassuming physical specimen; as I am thinking of an investigatory-type campaign (at least to start), I think a Harvey Walters-esque physique will do nicely. My PC is only of average intelligence, but  his force of personality is so great that most people he meets think him much cleverer than he truly is; in fact he's even convinced himself of this!

Next it is time to determine where the character is from, either one of the Mesopotamian city-states or a pastoral tribe, or even further afield (Egypt, the Indus Valley, Asia Minor), though much less information is provided about this last category due to the focus of the game. As I want this character in the centre of the action, he will hail from Babylon.

Now that I know where he's from, it's time to pick an ethnicity. Due to the cosmopolitan nature of the setting, there are almost no restrictions on this, and indeed players are encouraged to make interesting combinations, as the PCs are unusual individuals to begin with. I wanted a character from an established, if undistinguished, family so I just made him an ethnic Akkadian, like the majority of Babylonians.

Along with Ethnicity he needs a Social Class. There is a choice of three: awīlum (upper class), muškēnum (lower class), or wardum (slave). Choice is up to the player. Social class will influence which Profession a character may have, and how they get on in the social climate of 1767BCE.

A character's Mind score determines how many Languages they can know, giving one 'slot' per point. Spoken languages take up one slot each, writing systems take two. A PC must first select their native language, which is determined by the interplay of City State (or Tribe) and Ethnicity. As an ethnic Akkadian living in Babylon, Akkadian (specifically the Old Babylonian dialect) is my PC's native tongue (taking up the first slot). He spends the remaining 2 slots (from his Mind 3) to be literate, allowing him to read & write Cuneiform. If he later learns to speak Sumerian, Hittite, or Hurrian, he will automatically be able to read them as they share the cuneiform writing system.

Now that he has an origin, it is finally time to name him. There are substantial lists of Akkadian, Amorite, Elamite, Hurrian, and Sumerian names provided to choose from, so you'll never have to worry about running into Steve the soldier from Uruk or Gemma the Hurrian alewife. But I took a nice theophoric name out of one of my textbooks instead, Mannum-kīma-Adad (written ma-an-nu-um-ki-ma-dIŠKUR), meaning 'Who is like Adad?' (the storm god).

As Mannum-kīma-Adad is a member of the upper class, he has a choice of 16 out of the 23 Professions in the rulebook. A Profession determines the character's general skill set. There is no skill system per se; a character can do (i.e. roll for) all the things germane to their profession, but must roll at a penalty for actions outside it. The Profession also determines the character's access to magic, provides starting equipment & wealth, and grants a Professional Talent --  a special ability unique to each profession.

Mannum-kīma-Adad is a Bureaucrat, of which there are many many kinds. I chose tax-collector (mākisum) with the idea that he would be sent off to the villages surrounding Babylon to collect tribute for his first adventure. He starts play with 2d6+2 x10 = 100 shekels worth of material wealth (a shekel weighs 8.3g, about as much as a 50p coin, and represents the value of a litre of barley, a mace, or about a month's wages for a carpenter)-- Bureaucrat is one of the wealthiest Professions.

The Professional Talent of a Bureaucrat is Authority, which allows them to intimidate citizens of their polity and force them to comply (with a successful roll). A starting character gets three more Talents in addition. As a Bureaucrat, Mannum-kīma-Adad does not have access to or understanding of any magical rituals or spells; were he a Priest he could use his Talent slots for magic. So, our tax-collector is Perfect (auto success once per day), Fleet-footed (to help run away from combat), and has a Tough Mind (making it harder for others to damage his Mind attribute with attacks).


My new PC is ready for adventure, just as soon as I copy his stats onto one of my fun new character sheets (grab one for yourself at the bottom of my downloads page).