The Ecstatic, a new profession for BFJB 2nd ed.

In my previous post, I mentioned that I had some 1st edition BFJB characters I was going to convert and that it would be a simple task. In 7 out of 8 cases, this was absolutley true. The eighth took me, er, considerably longer, since I had picked a Profession that wasn't in the book and I wanted to do a proper write-up for it. So here it is, in the same format as the professions in the rulebook. It's followed by copious notes in the same order of topics as the profession entry, and a bibliography. 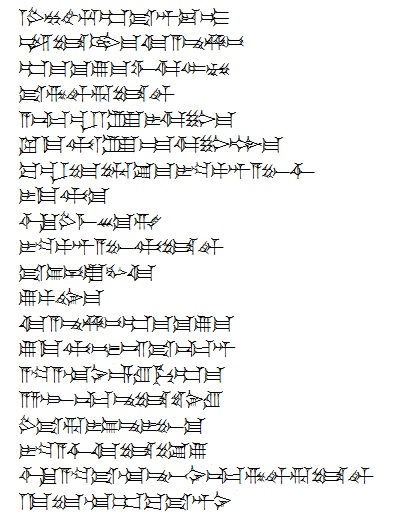 An ecstatic of Dagan
came to me and said,
"Truly, what
of Zimri-Lin's
shall I eat? Give me a lamb
so I may eat it." I gave him a lamb
and he ate it alive
before the city gate.
And I assembled
the elders
before the city gate
of Saggaratum
And he said,
"There will be a 'devouring';
tell the other cities
to give over the sacred things.
The man who does violence
let him be ejected
from the city.
And for the well-being of your lord, Zimri-Lim,
dress me in a garment."


Ecstatic prophets belong to the to the temple personnel of many gods (notably Ištar, Dagan, Marduk, Addad, Šamaš, Ninhursag, and Nergal). Groups of them are involved in the performance of certain cultic rituals, and they also receive messages directly from their god, entering into a furious rapture wherein they shout out enigmatic words and display other bizarre behaviours. Despite being touched by the divine, muḫḫū have a relatively low status and their rantings are not always believed. It is common for them to submit a lock of hair and the fringe of their garment (šārtum u sissiktum) which a bārûm (diviner) may use to verify the prophecy.

Relevant Checks: An ecstatic will have a good knowledge of the rites (but not dogma) of their own cult, and will understand some of the less technical aspects of divination. whilst not trained in any weapons, a raving ecstatic may make unarmed attacks without penalty.

Professional Talent: Frenzy (Soul). On a successful check, the ecstatic may enter into a wild trance, and proclaim the words of their god. The message will often be cryptic, but should hint at the dangers of the adventure before them. On a critical success, the divine pronouncement will be accompanied by strange and perhaps even frightening actions (see above for an example).

The information concerning prophets and ecstatics is rather fragmentary, and mostly comes from Mari in the Old Babylonian period. The muḫḫûm/muḫḫūtum is the most well attested. Others are the qammatum (possibly referring to a special hairstyle), the zabbum/zabbatum (possibly referring to a self-mutilator), nabû (whose name appears to be related to the Hebrew word for prophet), and an assortment of individuals for whom no title is given.

In places the zabbum is mentioned alongside the muḫḫûm, but in a lexical list (LTBA 2 1 vi 41-44) is given as an equivalent term along with eššebû, parû, and uššuru. Self-injury may be a common feature of the ecstatics, or just a hazard of their wild trance. An Akkadian literary text from Ugarit (Ugaritica V 162:11) contains the phrase aḫḫūa kīma maḫḫê damīšunu ramku 'my brothers are drenched in their blood like maḫḫû-ecstatics'. The tablet dates from c. 1300BC, but the composition is thought to date from about the time of Ḫammu-rapi: "sa graphie, ses archaïsmes, son style depouillé, sa concision même (en face de Ludlul), lui assignent vraisemblablement une date de composition paléobabylonienne ou de plus haute époque « cassite »" (ibid).

At Mari is found another cultic prophet, the āpilum/āpiltum ('answerer'). The āpilum also speaks the words of their god directly, but is not associated with ecstatic frenzy; there is an obscure statement in a letter (ARM 26 207) which hints at an āpilum administering a intoxicating drink to some men and women in order to obtain an oracle, but what the sentence actually means is debated. The āpilum enjoys a higher status than the muḫḫûm, a fact underscored by the preponderance of men in this role. Their prophecies are verified by the submission of their hair and fringe about as often as those of their ecstatic counterparts, though in both cases it should be noted that the prophecy of a woman is more likely to need verification. Some āpilū even write to the king directly. In game terms, an āpilum/āpiltum can be essentially treated as a kind of Diviner, though without the knowledge of extispicy.

My gut reaction was simply to go with muškēnum, as they are certainly temple dependents. However, some of them could be well rewarded for their prophecies by the king -- one in the UR III period was awarded 18000 litres of grain. Lluís Feliu interprets the unnamed prophetess in a letter to Zimri-Lin (ARM 26/1 210) as a muḫḫūtum. The text describes her simply as 'a woman, the wife of an awīlum (written MUNUS DAM LÚ). The prophetic gift does seem to cut across class lines, so I decided that allowing either class is probably not an inaccurate ruling. Note that there is a recorded instance of a slave girl delivering a prophecy, but such rare occasions are best left in the realm of NPCs, and need not concern us here, as the muḫḫûm and muḫḫūtum are professional prophets (in games terms as well as in the scholarly literature).

Their knowledge is situated about halfway between the priest and diviner professions, but should not eclipse either.

This was the most tenuous thread I followed, but spell ability seemed to fit aesthetically. I did lean on the equivalence (cited in the lexical list above) of the muḫḫûm and the eššebû. The CAD defines eššebû as 'an ecstatic with evil magical powers', and notes they appear in the Maqlu amongst other practitioners of witchcraft.

Not quite as effective as the diviner's, but as it doesn't require any outlay of resources (i.e. an animal for extispicy) it s slightly less restrictive.

Administrative documents often show the bequest of ordinary or 2nd quality garments and smaller amounts of silver, so I went with a very modest sum.

Fleming, Daniel E. 2004. “Prophets and Temple Personnel in the Mari Archives”. in The Priests in the Prophets: The Portrayal of Priests, Prophets and Other Religious Specialists in the Latter Prophets, edited by. Lester L. Grabbe and Alice Ogden Bellis, 44–64. London, T & T Clark.

Nissinen ,Martti. 2003. Prophets and Prophecy in the Ancient Near East. Atlanta ,Society of Biblical Literature.


Ancient texts were also found at