I had a strange nightmare last night. As the fear began to ebb from my sleep-addled brain, I realised that the book at the core of it presented an excellent idea for a Lamentations of the Flame Princess treasure & spell. If you don't mine your nightmares for weird fantasy inspiration, what good are they? 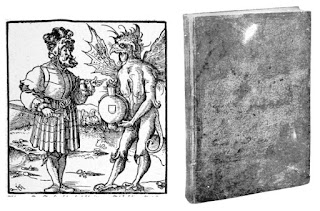 This slender and unassuming codex is bound in simple, dark brown leather. The pages inside are of worm-eaten vellum, which bear water damage along the bottom edges, and obviously antedate the binding by at least 100 years. It bears no title within nor without.

Inside the book is a curious text written in Latin in an Italian notorial cursive. The text starts on the first page with no title nor any words of introduction, and seemingly in the midst of sentence. It begins with the unknown author either fleeing or being driven out of the city of his birth, and setting out upon the road alone. He wanders through northern Italy as a vagabond, consumed by thoughts of revenge, until at last he calls upon the devil at a twilit crossroads, entreating him for the power to exact his retribution. The devil says that he will teach him an incantation to summon Pale Death herself to drag his enemies to hell, body and soul.

Here there is an abrupt shift in the text. The next dozen or so pages detail a ritual by which the devil may be summoned, and the steps required to bargain with him without immediately signing over one's immortal soul. Thereafter is appended a short incantation for summoning Pale Death, though it stresses that the incantation alone will not work without knowledge of some several secret signs, which only the Devil himself may impart.

The narrative then resumes for a handful of pages, telling how the narrator journeyed back to his native city, and delighted to watch the first of his enemies snatched away by the apparition of Death, who moved as though a great and terrible marionette manipulated by that master puppeteer, Satan. The narrative cuts off abruptly at the very bottom of the last page. The first and last quires of the book were evidently lost or discarded when the book was rebound.

Intoning the voces magicae and making the prescribed gestures of power summons Death to drag a single specified foe down to Hell. Death appears as a 7' tall bleached white skeleton. Onlookers may see translucent, silvery filaments holding the skeleton up like some sort of giant marionette, and if they follow these upwards the suggestion of a reddish, clawed hand -- the Devil's own -- will be seen manipulating it like a puppet. The hand and filaments are entirely insubstantial, and do not hamper the skeleton's movement in any way.

When the spell is cast (which takes a full round), Pale Death will immediately rush towards the designated victim and attempt to grapple them. Should it hold the victim in its clutches for 3 successive rounds, it disappears, taking the victim away to never be seen again. The skeleton can only remain material for 6 rounds. Should it fail to catch its victim in 3 rounds, or should the victim escape its grasp on round 4 or later, it will disappear immediately. It also disappears if somehow destroyed.

Only humans may be declared as victims. A victim taken away by Death is forever dead and cannot be brought back by any means.

The narrative contained in this accursed volume is essentially true, with but two exceptions. The narrator did not meet the devil at the crossroads, but rather a malevolent extra-dimensional entity from the Outer Darkness, one whose name could not be pronounced by the vocal apparatus of any creature which ever has or which ever shall walk the Earth. Similarly, the incantation does not summon Death, but rather a manifestation of the entity's power in Earth's local 11-dimension spacetime. These are, however, essentially minor points.

The book is not magical, though it may be possible to detect an aura of Evil, depending on your interpretation of the spell; it is no more -- and no less -- evil than any other treatise of black magic.

The codex has no intrinsic worth, but for the knowledge it contains it could fetch 1000sp from the right sort of person.

The ritual must be performed at evening twilight at a crossroads. It takes half an hour to perform, and uses up 750sp worth of supplies. The "Devil" will appear to the onlookers in whatever form they expect him to take. He will treat with them as they might expect, for the Entity has a reasonable knowledge of human history and belief -- certainly enough to pull off this deception. A cleric might be able to catch him out by revealing his ignorance of the minutia of Christian doctrine, but demanding proofs from him are far more likely to arouse the Entity's wrath before the con can be revealed. The Entity will offer to teach the secret gestures that accompany the incantation of summoning death, in exchange for the spellcaster's immortal soul. The caster is advised to adhere to the following dialogue:

Magus: But by bringing Doom upon my enemies, I send their Souls to thy Kingdom in mine's stead.

Diabolus: Yet thy enemies are wicked, and bound for my Kingdom by their own Will.

Magus: Verily, but may they not someday repent? I shall send them to thy House unshriven, that they cannot escape Damnation.

Diabolus: But may'st thou not also seek Absolution in the Church?

Magus: By this very Bargain do I turn my face ever from Salvation.

The Entity will of course relent, as it has no interest in Earthly religion. Any suitably religious person will know that salvation is always an option for those who earnestly repent, and even the worldly will know of a handful of tales whereby a clever person outsmarts the Devil thus. Once the Entity teaches the secret gestures to accompany the incantation, it will depart.

Should the PC(s) attempt to trick the Entity, they will most likely end up dead. Harassing it with questions or subjecting it to cross-examination is likely to arouse its ire, as are any spells being used against it. Most magic will simply not effect it, though spells such as ESP or Detect Evil will cause the caster's brain to explode from the overwhelming feedback (no save); anyone within 5' will suffer 1d3 damage from skull fragments (save vs. Breath Weapon negates). Anyone else offending the Entity will suffer an instant, messy demise; allow a Death save, with success indicating their remains are at least able to be identified.

The above spell description can be passed to the player(s) once this spell is learnt. It does function exactly as written, save that the whole appearance of the hand and skeleton is illusory. Its true appearance, should it actually be seen (Detect Illusion works), is a roiling black mass of energy, spinning at hundreds of rotations per second.

On the face of it, this seems very powerful for a first level spell. And it is, but there's a catch. The more it's used, the more likely it is that the Entity will have collected enough bodies/souls for its strange purpose. For each casting after the first, roll 1d6. If the roll is less than the total number of castings (including the current one), the skeleton will attack the caster instead of the designated victim. Should the caster escape, there will be no further repercussions, but if the spell is cast again, the skeleton will continue to go after the caster. Should the caster escape a second time and try the spell yet again, it will still try to attack the caster, and you should strongly consider running a game for smarter players.

The ultimate fate of those spirited away by this spell is left to the referee; they could simply be devoured body and soul by the strange Entity, used as slaves, made to fight for its amusement, or simply deposited in a different place and time (to reappear as N/PCs in a different campaign world) for inscrutable purposes.
Posted by Alea iactanda est at 21:08 No comments: