LotFP solo - Part the Eighth: "Through the sick day in which we wake to weep"

Setup: Modified - Interrupt (rolled a 2. Was: rest until help arrives) 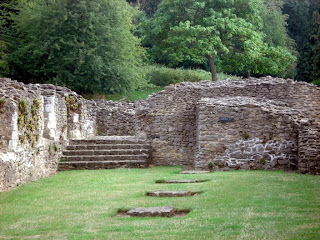 Firdeth and Oigonlaer watch over the others quietly. There are no encounters, so their wounds heal nicely.

Aldira and Debinvarr each lose 1 CON to the disease, Yrene and Théscine lose 3 each. Debinvarr and Théscine lie comatose in a tent, but the other two can at least come out to sit by the fire. Aldira spends her time chatting with the elves. Yrene mostly drifts in and out of sleep.

The day passes uneventfully as before. But that evening Benyithelnol, Caerindíl, and Fr. Biölning claw their way out of their graves. They are rotten and horrible as the things that brought them low. Seeing the light of the campfire, they trudge through the ruins to attack their former friends. "By the Gods!" gasps Aldira as she sees them approach.

[neither party is surprised. round 1.] Firdeth and Oighonlaer grab their weapons and spring into action. Unfortunately neither hurt their opponents, buried as they were in their armour. Aldira struggles to her feet and shouts for everyone to get back away from the fire.

The three Festering Ones attack the three heroes. Only Firdeth is hit for [for 2, dropping her to 3hp].

[round 2.] The elves beat a hasty retreat, bravely interposing themselves between Aldira and the shambling corpses. Aldira summons all her strength to cast a spell. A mass of sticky webs appears out of nowhere, growing between the advancing undead and halting their approach. The webs grow to encompass the campfire, and are instantly set alight. Two of the corpses are consumed in flames,  [webs burn for 2 rounds, causing 1d6 damage / round. 2 destroyed, the last is down to 3hp] but the thing that was Caerindíl stumbles forth as the last of the webs burn away.

[round 3(observed).] Oigholaer steps forward to attack with his spear, but again fails to injure the thing. It bashes him with two smouldering fists [6 damage, bringing him to -1hp]. He falls before the onslaught.

[round 4.] Firdeth charges at it, slashing wildly with her rapier, eventually bringing down the horrid undead creature.

After tending to Oighonlaer's wounds as best they can, Aldira and Firdeth drag the remains away from camp, where Firdeth digs a shallow trench whilst Aldira collects kindling. They use the rest of the lamp oil to burn the bodies lest they rise again.

That night, both Firdeth and Oighonlaer show the first signs of disease. [Everyone loses one or two points of CON from failed saves. Aldira is very fortunate; she lost one point during the day before the fight, but made both her evening and nighttime saves despite the -2 penalty for interrupted rest].

The day passes slowly. The disease continues to ravage the whole camp. Firdeth has succumbed the least, so far, and tries to keep the fire going and cook their meals.

In the mid-afternoon, the sound of horses arriving at full gallop rouses Firdeth from her grim thoughts. She clutches her rapier and looks over the ruined wall to investigate. What a sight to behold! Her friends have returned, and with help. They have been riding the horses hard since dawn; one of the horses dies from exhaustion.

Barnot wastes no time in assessing the sick. Yrene is found to have died some time that morning; Lycinia and Miolla take her body away to be burned. Théscine and Aldira are the next worst off. Barnot blesses them both [even though Bless doesn't work on elves or other magical creatures] and tries to banish the infection from them. Aldira recovers, but the Hunting God does not smile upon Théscine. 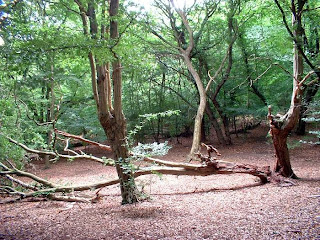 Lycinia and Miolla complain of boredom. Barnot suggests they go hunting in the nearby forest. Lycinia borrows Debinvarr's longbow, and the two set off. [They get 3 meals worth of food (rabbit) for their efforts, and also incur a random encounter: 16 bandits (0-level humans) + their leader, a 1st level Specialist.

The bandits approach through the trees. They are spread out into three groups. They are clad in leathers, and armed with a mix of shortbows and light crossbows. Their leader (a woman distinguished by her fine armour and obvious authority) calls out to the elves to drop their weapons and surrender their valuables, or face the consequences.

[round 1. No surprise, PCs win initiative.] Lycinia and Miolla look at each other for a moment, then smile knowingly. Each then casts a Sleep spell at one of the groups of bandits. [Lycina gets 14HD, Miolla 7HD] The leader and her four lieutenants fall deeply asleep, as do seven out of a group of eight others. The third group (of 4) raise their bows and fire; Lycinia and Miolla are each hit by a single arrow, but the wounds are only minor (1 damage each). The bandit left standing in the middle group starts slapping one of his comrades awake.

[round 2.] Lycinia nocks and arrow and lets it fly. The bandit who just woke his fellow is hit in the throat [5 damage, down to -3] and falls over, mortally wounded. Miolla fires at the bandit who is just awakening, wounding him severely but not enough to take him out of the fight [5 damage, 1hp left]. Another volley of arrows comes towards the elves, hitting the ground and trees around them [attack rolls 1,3, 1, 12].

[round 3.] Miolla puts a second arrow into the sleepy bandit's chest, killing him outright [6 damage puts him at -5hp]. Lycinia fires on an uncertain target [rolled a 2]. Another volley of arrows sails hopelessly past the two elves.

[round 4.] The attack rolls on both sides were so bad this round that they have been stricken from the record.

[round 5.] Having had enough of the exchange of arrows, Lycinia and Miolla advance to close combat range, trying to use the trees for cover. Lycinia is unlucky; an arrow finds a weak spot in her chainmail, giving her a nasty wound just beneath her collarbone [4 damage; she has 1hp left].

[round 6.] The bandits scramble to draw shortswords and hand axes as the two elves rush at them, swinging. Lycinia runs one through with her sword [9 damage, dropping her to to -5hp] as Miolla crushes another's skull with her mace [7 damage, leaving him at -4hp]. Both die instantly. The other two [morale check fails] throw down their weapons and surrender.

Lycinia gestures at one of the bandits with her gore-covered sword. "Make it worth our while to let you live," she says.

As the two remaining bandits flee for their lives, the elves walk over to the slumbering bandit leader. She has a grubby sack filled with loot. Lycinia begins killing the sleepers where they lie, until she notices Miolla's pained expression. "Oh, Lycinia, do you think everyone would do the same to us?"

"I do, dear Miolla," she responds. "But I hate to see you upset. We'll leave the rest. But we shall cut their bowstrings and scatter their swords through the wood!"

Lycinia ruins the bows whilst Miolla starts to scatter the swords; she can throw them awfully far. After about five minutes they begin to fear the sleep magic will wear off, and head out of the forest with their treasure. They arrive back at camp injured and bloody, but beaming, flushed with the success of their venture.

The disease has taken its toll on the CON scores of the afflicted, though some have had time to recuperate a little (a full day's rest restores 1 point). Their current/max scores are:
Aldira 10/13
Théscine 7/9
Debinvarr 9/13
Firdeth 9/15

I tracked the whole course of the disease and associated hit point loss from lowered constitution scores, but I have redacted it from the narrative. If anyone is enough of a game mechanics junkie to want to see the disease rules in action, I kept the notes.

Lycinia and Miolla get 92xp each for the fight with the bandits. They will get xp for the bandit's treasure (excluding coins) and the mass of recovered silver pieces* from the dungeon when they get them back to civilisation.

But they did bring a sizable haul from the dungeon expeditions back to civilisation (Finsover) already, totalling 3112sp. There were 6 party members at the time for XP purposes, so 3112/6=518xp each.

*N.B. There were, of course, 6 characters in the fight that cleared the room where the 2000sp lay, but as Lycinia and Miolla went back for them alone, and also set out nearly alone (Tibalt being essentially a professional torch-carrier and amateur xp sponge) to bring healing back to the party, they seem to deserve the extra XP.