After matins, the novices must attend to their chores. Today, those sent to sweep the stones of the courtyard and polish the great brass torch in the hand of the statue of Saint Aerdwine are privy to a sight most strange. The Reverend Father leads a cortège into the Monastery, holding aloft an extinguished brass torch. Behind him follows a group of elves (and one human woman), armed and armoured, blood-spattered and dishevelled, and each bearing a handful of crumbling yellow bones. The lead elf, holding the skull, weeps profusely. Behind these are two priests, brass torches blazing, chanting the office for the dead.

They proceed through the courtyard and head down into the catacombs. Eril's bones are deposited in a niche in her family vault. Her tormented soul can finally know peace. 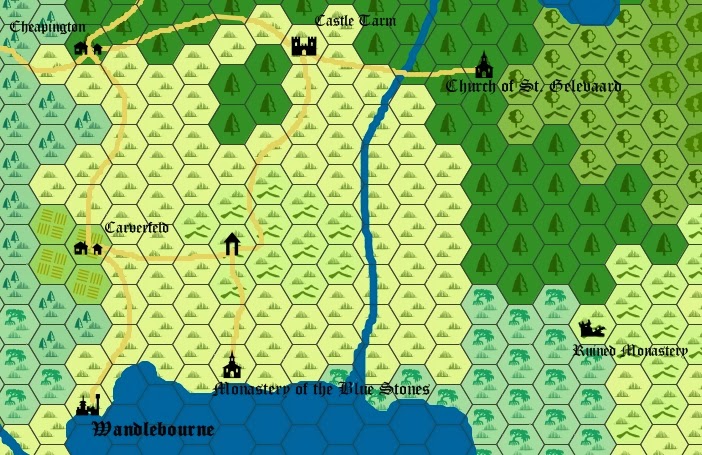 Setup: Travel back to the Ruined Monastery & make camp

After the obsequies are through, the PCs have an informal interview with the Reverend Father. They tell him of their immediate plans to return to the ruined monastery to retrieve and bury the bodies of Aldira's companions, and appeal to him for assistance.

Q: Does the Reverend Father have any demands of his own? Likely: 97, Exceptional No.
Q: Can PCs get an NPC cleric to come for healing / last rites? Unlikely: 17, Yes. (level 1d3; won't enter the dungeon; PCs must also tithe 15% of normal treasure, and hand over all religious items recovered for re-consecration)

The Reverend Father agrees to send a junior cleric with them, but says it will take at least a day to arrange. The PCs readily agree, especially as Miolla is still inconsolable and not fit to travel.

The party find themselves at a loose end. There are many places in the monastery they cannot go, as the holy aura is repellent to those of the faerie folk. Aldira, on the other hand, goes to watch the services, and meditate in the chapels; she hasn't really been in a church since she was a girl (er, except that one time to rob it...), but the whole ordeal with the vampire and the crown has left her a bit shaken. The elves spend most of their time down on the rocky beach. Firdeth and Debinvarr practise their fencing. Théscine wraps herself in a cloak and falls asleep. Miolla sits on a rock weeping. Lycina sits beside her, staring out at the tide.

The next morning Lycinia announces to the Reverend Father their intention to set out for the ruined monastery as soon as they have loaded their gear onto their horses. He has an aide summon their assigned healer, and walks out to the courtyard to see them all off. Lycinia takes the opportunity to ask him what he knows of the ruined monastery.

[I've added a new section to my Rumours for Solo Adventurers thing, cleaned up the tables a little and added some notes. It's now a page on my blog rather than just a post.

The new section is called Asking an NPC, and since Lycinia just did...

Since the topic of the rumour is obvious (a combination of Background & Location Data), we skip straight to the bibliomancy:

Interpretation: There was a holy artifact, a wand having immense power over the living and the dead, contained within the monastery. It is said that this led to its downfall.

Magnitude: Since this is definitely about something bad, I'll use the plus/minus column: rolling 11 gives ±4 good fortune/ruin.

Truth: Because the Reverend Father's reaction roll towards the PCs was over 10, he will give them his opinion of this rumour that he is relating; this is simulated by rolling one of the two d6s used on the truth table now. Rolling a 5 means he thinks it's pretty likely true. I will mark a random X somewhere on the empty graph paper that is the lower level of the dungeon. When (if) the PCs reach that square, I'll roll the second d6, and the truth will be revealed!]

Just before beginning their journey from the monastery, the PCs meet the young monk assigned to go with them:

The party travel by road northwards to Castle Tarm. It's a rather bland journey, though at one point [courtesy of the d30 companion] they encounter a nude man walking along the road, scourging himself. Brother Mundlo states that they should take no notice of this errant heretic, a request which the rest are all too pleased to accommodate. This is unfortunately followed by an extemporaneous sermon on the True Path of Light and Propriety in Faith. By the time they arrive at the Castle, Aldira has relapsed into a non-churchgoer, and the elves are quietly conversing amongst themselves (in Elvish, which Aldira understands but the cleric does not), whether or not they really need a healer along. He redeems himself somewhat in their eyes when they reach the castle. The presence of a holy man confers some respect onto the whole group [reaction roll 8]. Instead of being shunted away again by heavily armed soldiers, they are given shelter in the stables, and both they and their mounts are treated to a reasonable dinner.

The day is dark and wet; though the rain never gets above a drizzle, it also never abates. On the road between Castle Tarm and the Church of St. Gelevaard...

[d30 Companion road encounter produces 6x 0-level humans, who are Hostile and intend to Bargain.
Q: What do they want? Extravagance/Illusions. They're mountebanks.
Q: Is the party taken in? Unlikely: 31, Yes.]

the PCs meet a pair of travelling "merchants" and their retinue. They have much to offer on their ox-drawn wagon. In the end, the PCs hand over 500sp worth of gems to purchase 5 (fake) healing potions.

That night they make camp in forest a few miles SE of the Church.

Zuhal refuses to come within 30' of anyone. He and the elves conduct a rather strange, shouted  interview from a distance. He explains that he is a foreigner, who had come north from the continent in search of magical knowledge. His research, however, has gone awry, and now he must wander the forest alone. The PCs agree to come back to find him should they discover a way of parting cursed items from their victims. Zuhal thanks them for their solicitude, and goes his lonely way.

When they reach the ruined monastery, they set up another base camp, and prepare to explore the dungeons again on the following day.

I was sort of expecting another quest (er, thread in Mythic parlance) to come out of the false crown revelation, and was surprised by the No result. But when I thought about it rationally, it is an internal church matter: hardly the sort of thing you'd ask a random group of essentially Basic Set characters to look into. But I added NPCs to the characters list just in case their paths are fated to cross again.