Setup: Modified - Altered (rolled a 3. Was: travel back to Castle Vyljusz to trade for the Crown)

Altered scene: Q: Is Siorighan away from home? Unlikely: 61, No. She has visitors (to be determined randomly when PCs arrive) 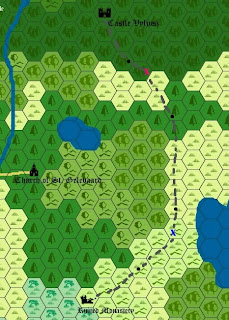 Oighonlaer's grave is dug, and he is burned in it to keep him from rising as undead. Tibalt and Barnot depart, heading back to the forest shrine. One of the horses is given to them as gift. The elves head north with Aldira for half a day's uneventful journey.

[afternoon random encounter comes up as a Mule.

The party spots a lone mule atop a hill, laden with equipment and bags of loot. As they approach it, they begin to her the sounds of an argument coming from nearby. As they crest he hill they, see a group of eight humans and dwarves, so wrapped up in their debate that they have failed to notice their mule wandering off. The elves are nearly upon them before they realise they have company.

One of the dwarves grabs a longsword in an ornate gilded scabbard and breaks off from the group. "Elves!" he shouts excitedly as he runs forward, right up to Théscine. He presses the sword into her hands. "There! We're done with it!" he thunders. "Finally rid of that damnable elf-blade!"

Seeing the elves' and Aldira's shocked expressions, he begins to explain: "Oh, there's not a thing wrong with it. It isn't cursed nor anything, else we'd never've seen the end of it. But it won't fight for dwarf nor human!"

He snatches the gleaming sword from its sheath, and gives it to Aldira. "Here, lassie," he says, removing his helmet, "take a swing right at me head. Go on now, nothing to fear."

Aldira looks to her companions for reassurance, but they mostly look confused and shrug their shoulders. She hesitantly lifts the sword, and takes a half-hearted swing at the waiting dwarf. The sword wrenches itself from her hand and sticks itself into the ground several feet away. "See!" exclaims the dwarf.

The two groups of adventurers pause their respective journeys, and eat some trail rations together whilst exchanging rumours and gossip. The dwarves and their friends are travelling south, returning from an expedition against some brigands that have been plaguing the area. Most of the treasure loaded on their mule is to be returned to the good people of Ander's Well, but the rest they will be allowed to keep as a bonus. The sword obviously doesn't belong to anyone there, and Kreltner (one of the fighters) nearly got killed trying to use it in battle.

They part ways in due course, though the PCs manage to pick up some information about Ander's Well before they go:

To all at once a rest from toils, a single labour for all

There's a sighting of a Tuatara lizard in the forest at night; otherwise the day was uneventful.

The elves are making their way through through the forest when a griffon swoops out of the sky and lands in front of them. "Hello friends," says the magnificent beast in perfect elvish, "what brings you to this part of the forest?"

The griffin makes polite conversation for a minute or two, but it's obvious that something is on his mind. "I couldn't help noticing," he says, trying to appear casual, "that you aren't riding the horses you have with you. Now, I'm sure I don't have to tell you how we griffons feel about horses! I would very much like to negotiate a trade. You're practically at your destination; you should reach there by the next nightfall. So it shouldn't be an inconvenience for you to part with them. I happen to have come across a treasure map. The treasure is in some sort of underground complex, so the map is of no use to me. I'm sure the treasure is worth more than a pair of old horses. So we'll both come out of this ahead. What do you say, friend elves?"

After very little deliberation they accept the griffon's offer, and the elated beast soars off to his lair to fetch the map. The party removes the saddlebags from the horses and redistributes some of their other loot in preparation for the hike to the castle. The griffon soon returns, and makes sure the elves are satisfied with the map before accepting the horses' reins. "If you're ever back this way again," he says in parting, "I'd love to do business with you again. I have some valuable antique coins in my hoard. And I'll pay you better than market rates!" He leads the horses off into the forest, humming a happy tune to himself.

The party only manage two more miles of travel that day, but their strange dealings with the griffon have lightened their spirits considerably.

That night there is a sound of wild beasts in the trees, outside the circle of firelight. Malicious seeming eyes flash in the darkness.

But the party is within 3 hexes of Castle Vyljusz. They picked up a rumour from the soldiers there in Part III (which I added to the post well after the fact when I realised I had left out the Upkeep section. Oops.)

Rumour Type: location - region
Bibliomancy: ipsae lacte domum referent distenta capellae / ubera nec magnos metuent armenta leones; (Vergil: Ecloga IV, 21-2)
(the she goats will return home, udders distended with milk / and the herd will not fear the great lions)
Interpretation: there are no dangerous wild beasts in the region around the castle. I will check for the truth of this rumour should a random encounter be indicated within 3 hexes of the Castle.

So it's time to check for the Truth of the rumour (tableXXX): the roll is 11: completely true.]

The "dire wolves" turn out to be a deer and two fauns, who scamper off into the night. 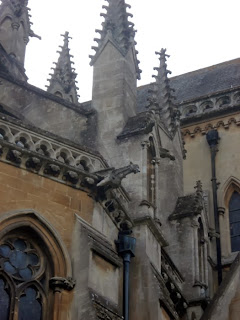 True to the griffon's word, the party arrives at the castle just before the evening. They meet one of Siorighan's  apprentices coming out, heading south on some sort of errand. She tell them to be careful; Siorighan has guests, a group of dwarven mercenaries out looking for a certain religious artifact.

Siorighan may be a bit money-minded, but she observes the forms of hospitality assiduously. The elves are received warmly into the castle by her Major-domo, given rooms with warm fires and invited down to dine at their leisure in the great hall. There are three dwarves present. The two lieutenants are all but silent, and display the characteristic dwarven reserve. Their leader, Gwilda Stoutspear, is a fidgety and very plain-speaking woman of action. She is surprisingly affable towards the elves when she learns they are all of noble stock, and asks endless questions about their lineage. Aldira, however, she treats as beneath contempt when she discovers that her family are simple coopers. Gwilda says little about her mission to recover the Crown. She assumes that a group of elves -- noble ones especially -- could have nothing to do with such villainy. Siorighan treats the dwarves with a cool and detached courtesy, which they return in kind. Gwilda sees Siorighan as a social inferior, though one dangerous to anger.

Later that night the Major-Domo visits Aldira, Lycina, and Miolla in their apartments. "I take it you've returned with the payment?" he asks directly.

"These two jewels," says Aldira, handing them over, "and all this silver."

"These should be worth at least 1500 silver pieces," replies the Major-Domo. "How much do you have in coin?"

Having ascertained that there are in fact 2000sp in the bags, he hands over the false crown. Aldira collapses into an overstuffed armchair, relieved but visibly trembling. Miolla goes to comfort her. Lycinia puts the crown on Aldira's head, and makes a show of scrutinising her for a moment. "I don't think it goes with your tunic," she says. "Hey, cheer up. You're free now. Time to see to your own plans."

"I... I don't really have any. I didn't really think I'd get this far. I don't suppose elves have any need of the services of a neophyte wizard?"

The elves and their new wizard companion remain in Castle Vyljusz for ten days to recover from their illnesses and attempt some magical research in the castle library. The autumn rains lend a gloomy atmosphere to their stay. When the weather clears up, they decide it's time to set out for Cheapington. They haven't quite uncovered any great secrets of magical lore, but they feel they have outstayed their welcome, and would rather not learn about he effects of powerful magic directly from an offended host.

Healing: Firdeth is the worst off; she needs 6 days to recover all lost CON. Since the party is staying for 10, everyone makes a full recovery.

XP: Lycinia & Miolla gain 2445xp each for the treasure they acquired on their own, which is enough  for them both to attain 2nd level. Miolla gains 4hp, Lycinia (rolls 5 +1 Con bonus) gains 6. They each get to research one spell for free.

Research: Everyone has up to 10 days to do some research. Lycinia transcribes Sleep (can only take 1 day due to her INT bonus) from Aldira's spellbook. into her own. She also attempts to research Charm Person (as her free levelling up spell), but fails; she needed 12 days. Miolla takes 4 days to transcribe Sleep (she only would have needed three, but didn't want to take any chances since she has an INT penalty). Théscine and Aldira also attempt some spell research when they are fully recovered, but haven't the time to reap any benefit from it. Their failed experiments eat up 375sp worth of materials.

The PCs pay Siorighan 100sp to identify the potion of Invisibility they found in the dungeon.

Visitors: The dwarven mercenaries (8xD1, 1xD3) left the day after the PCs arrived. I rolled a 6 for Siorighan's reaction towards the dwarves, and a 10 for her reaction to the party, so she definitely wasn't going to sell them out. Using the d30 Companion I generated their leader:

I also used Mythic to figure out how things would go at the castle:

Q: After the dwarves after the crown thieves? 50/50: 12, Exceptional Yes.
Q: Do dwarves figure out what's going on with the elves? Somewhat Likely: 98, Exceptional no. They will leave next day without a second thought.
Q: Will Siorighan let PCs stay to recuperate? 50/50: 01, Exceptional Yes. For a bit longer, in fact.
Q: Will Aldira stay with PCs? Likely: 10, Exceptional Yes. She'll even help them find Neldir. The elves still intend to help her recover her friends' bodies from the dungeon, but everyone agrees the crown needs to be gotten rid of first.

Sword: The sword defied all attempts to identify it. I'm going to wait for Mythic to fill in the details through random events and the like.

Griffon: If the encounter with the dwarf and his friends who gave Théscine the sword was a bit lighthearted, the encounter with the griffin was downright whimsical. I like grim fantasy, but that should never preclude such an encounter. If anything, it will only throw the horrific elements into higher contrast. Warhammer has a great setting and all, but I get the feeling that no one there ever smiles about anything ever. Everything is always horrible, to the point that I wonder if anyone really notices it.

Anyway, I rolled the encounter completely at random. The griffon passed his morale check so as not to attack the horses immediately (per the Expert rulebook). His reaction roll was 9, Talkative. I rolled a single personality trait from the d30 Companion and got Relaxed.

I decided he would most likely be after the horses, so I generated a random hoard for his lair to determine what he would have to bargain with:

I've added the griffon to the Mythic characters list, because he's easily my favourite random NPC ever and it will be fun to see if he turns up again.