"We have business with Siorighan as well," explains Oighonlaer. "We desire of her the false crown, but she will not part withal save that your debt be paid. We shall thus help free you from the sorceress' binding spell." 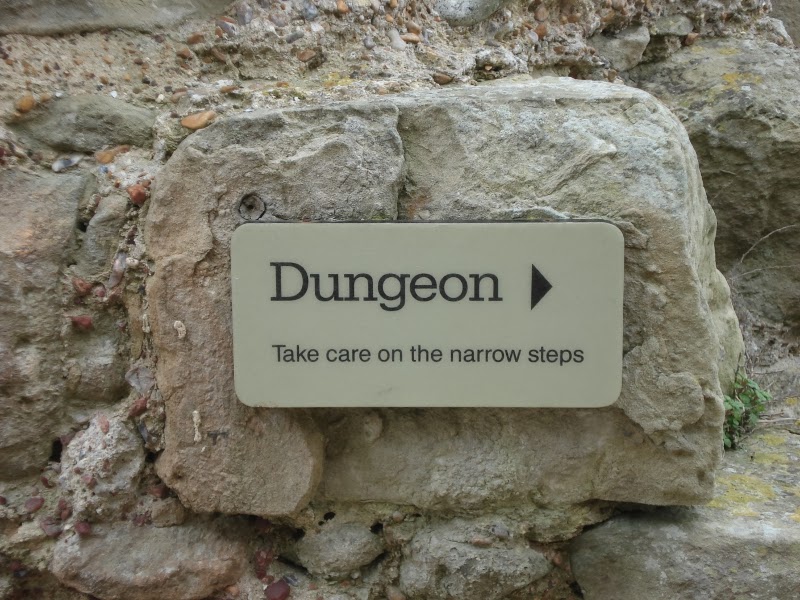 Setup: Unaltered - PCs agree to help get treasure, recover bodies, and find cure. Into the dungeon they go.

After a good night's sleep, Caerindíl & Benyithelnol have healed 1hp. The party leaves the rest of their provisions & bedrolls, and most of their extra torches and waterskins in the camp, hoping to need the extra carrying capacity for TREASURE!

They clamber down into the half-exposed crypt which once lay under the monastery's great chapel. A once-hidden stairway has been uncovered by Aldira's party, leading down under the earth into the strange dungeons. Lycinia leads the party, with torch and sword in hand. Firdeth brings up the rear, carrying her lantern.

[Random dungeon generation courtesy of the tables in the 1st edition DMG. Monsters, wandering and otherwise, from the tables in the Basic rules, except that any nonsensical result will be swapped with a randomly generated monster from the tables in Best of Dragon volume 1 (i.e. no Traders in the dungeon). I'll be providing full write-ups for all the non-book monsters encountered in a separate page.] 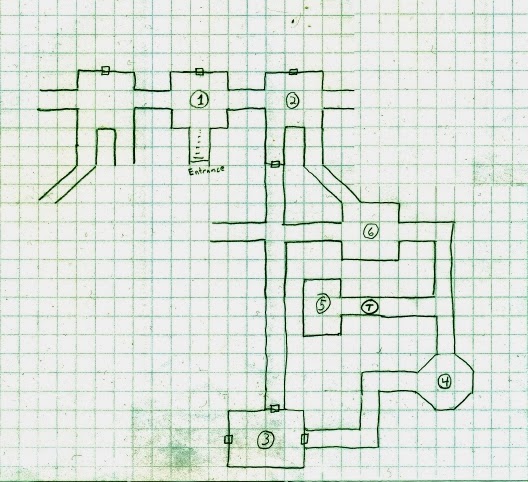 Descending into the darkness of the entrance chamber [room 1], the PCs disturb a group of 7 stirges nesting therein. They fly up suddenly in a whirling cloud, and attack. The battle is short but intense; the beasties are quickly slain. Only Debinvarr is unlucky enough to be pierced by one of their beaks (for 2 damage, leaving him with 3hp).

The PCs spread out and divide into two groups, each trying to peer down the corridors with their light. Suddenly a strange, white, tentacled flopping thing [a #6] hurtles into the room from the right-hand corridor. The elves are too surprised to react. The thing tries to bludgeon Théscine, but she reacts in just enough time to interpose her shield between herself and the flailing tentacles.

[round 1. It wins initiative] Undaunted, it rears up on its back two legs and continues flailing away at Théscine.  It gets around her shield, smacking her in the head [for 4 damage]; she drops [with 0hp] to the floor. Firdeth, Benyithelnol, and Oighonlaer all try to overcome the beast, but are fighting too defensively to land a hit.

[round 2.] The thing switches its attention to Oighonlaer, but cannot get in striking distance past his spear. Oighonlaer does manage to inflict a minor wound [2 damage] whilst keeping it off. Caerindíl sticks it in the side with his own spear [4 damage]; ichor leaks from the wound. Lycinia joins the battle, stepping over the unconscious form of Théscine. Her sword bites deep [9 damage] and the thing lets out a gurgling cry [it's down to 8hp].

[round3.] The thing continues to flail uselessly at Oigonlaer. It soon lies dead and oozing at the elves' feet.

As Benyithelnol and Lycinia make certain the thing is dead, Oighonlaer rushes to heal Théscine with the magical salve [for 2, bringing her up to 2; 4 applications remain].

The PCs proceed cautiously down the [10'] wide corridor [to room 2] to see where thing came from. Lycinia takes the lead with her torch; Miolla and Debinvarr follow close behind and to either side of her, their bows and ready to shoot.

There is nothing but débris, offal, and a collection of gnawed bones in [room 2] the next chamber. It seems likely this is the lair of the -- well, whatever it was. Caerindíl prods some of the piles of rubbish with his spear, but it's obvious this room contains nothing of value. The elves decide to proceed, turning down the first right-hand corridor (to the south).

A door bars their way. "What the hell," thinks Lycinia, and nudges it open with her foot. The passage continues beyond. Going straight through a four-way intersection and down a long corridor, they come to yet another door. Opening it...

[room contents: monster & treasure. Rolling on Basic D&D's 1st level monster table produces 3 dwarves. Ok, why not? But why are they here?

Q: Are these abnormal dwarves? (Mythic) Likely: 87, No.
Q: How did they get in here? (bibliomancy)

Adgressi — nam saepe senex spe carminis ambo / luserat — iniciunt ipsis ex vincula sertis:
Vergil, Eclogue VI, 18-9
(Approaching -- for often the old man teased them both with hope of a song -- they bind him in fetters made from the garlands themselves)

Interpretation: The dwarves are captives here. Rolling a reaction gets 8, Indifferent.

...produces a draught of warm, rank-smelling air. And a strange sight greets the elves through the open door. Braziers of glowing coals dimly illuminate the room. Three dwarves sit silently on the floor in the centre. They are dirty, bruised, dressed in bloody tatters, and somewhat emaciated. Each of their hands has been fettered to iron rings set in the floor. There are about 2000 copper coins scattered over the floor around the dwarves.

The PCs spend several minutes trying to communicate, but the poor dwarves are too far gone to speak or react. It is decided to leave them alone for the moment, though not to abandon them; dwarves they may be, but even xenophobic Benyithelnol is moved by the piteous sight.

Opening the door to east, the party advances cautiously down the corridor. [A wandering monster is indicated; 5 #11s] Five small white humanoids are advancing up the corridor. They look like twisted and gnarled homunculi, naked and sexless, none standing over two and a half feet tall. Each is armed with some sort of crude torture implement. As Lycinia's torch illuminates the things, they chitter angrily.

[round 1] Miolla and Debinvarr quickly loose their arrows at the things. Both arrows find their targets, killing them. The other things surge forward and attack Lycinia, but their weapons merely scrape against her chainmail.

[round 2] Everyone pulls back into the room so there's space to fight. Lycinia fights defensively, dodging and parrying the flurry of angry blows coming from the shrieking, hissing mannikins. But they are just as canny, and no hits are scored on either side.

[round 3] Caeridíl and Miolla kill one each; the last one flees back down the dark corridor with surprising alacrity.

The elves give chase, lest the survivor rouse too many other inhabitants of this benighted  complex.

[They continue to room 4, whence came the 11s. Roll for room contents is Monster Only.

The elves pursue the creature to its lair, where five of its fellows await them. The fight is over quickly; the horrible little things are frightening, but no match for elven warriors. Only Firdeth is wounded in the fray, though not severely [2 hits for 1 point each].

The things had made their lair in a open chamber. Filth, bones, excrement, and rusty tools are spread over the floor. A carved marble font is set into the stone wall. It once must have held holy water, but has many years been dry. It is filled with putrid fabric, probably the things' nest. The elves agree that it couldn't possibly hold anything of value, and leave it unmolested.

The elves decide to leave by the western corridor. They pass by a trapdoor in the floor and come to a seemingly empty room at the end of the hall [room 5]. They are about to decide whether or not to poke through the rubbish within when creatures are seen moving slyly in the darkness [The party is not surprised]. The three reptilian beasts [#8s] are about man-sized, built long and low to the ground, and seem to posses an odd number of limbs. Their dull black skin makes them nearly invisible in the dim light.

The cunning beasts notice their quarry has detected them. Hissing between the teeth of their long black snouts, they whip their tails forward and loose a volley of deadly spines down the passage. Most of them whistle by in the darkness, but Miolla and Debinvarr are each severely wounded as two of the spikes hit home. [volleys of 1d4 each, resulting in 3, 2, and 2 spikes with random targets. Miolla took 3damage, Debinvarr 2, reducing them both to 1hp.] The two injured elves retreat back down the corridor, whilst the others advance. Only Lycinia's blade finds its mark [3 damage, reducing one to 5hp. There was no surprise, and initiative was tied. I rolled a 17 for the monsters' effective DEX,so they effectively win the initiative (since Miolla is hors de combat, and no one else has higher than 16).

round 3...] The fight seems to last an age [12 rounds, actually]. The ferocious beasts are much less dangerous fighters than they first seemed, but their thick skin is remarkably hard to pierce; it's almost like hacking through plate armour. In the end they are vanquished. Caerindíl and Oigonlaer have sustained moderate injuries [down to 2 & 3 hp, respectively], Lycinia has been severely bitten [4 points, leaving her at 2hp] and Firdeth has been rendered unconscious [-1hp].

The party is starting to feel a bit worn down, but decide to press on a little further. They return to the mannikins' lair, and then head through [a northern passage to room 6].

This room looks to have once been a storage area as attested by the rotten remains of old crates and boxes, some sludge which may have been sacks of grain, and shattered amphorae. These last seem to have been only recently disturbed, and the adventurer responsible seems never to have made it out of the room. The unfortunate dwarf's skeletal remains lie in the midst of the clay potsherds, still clutching a rusting mace in one hand.

The elves are just about to examine a discarded backpack when three small shrieking creatures burst forth from their nest inside the dwarf's chest cavity. The [#3s] creatures are rat-sized, tripedal, grey-skinned mammals with a single large glowing eye in the centre of their foreheads. They stop and stare at the surprised elves for a few moments, and then rush into combat with their needle-like yellow teeth. [The creatures used their special Charm Person power during the surprise round, which of course is useless against elves.] The things are really no match for our heroes, who make short work of them. Oighonlaer suffers a nasty bite [2 damage, down to 2hp], but no one else is injured.

The party decide they need rest before continuing, and head back to the surface. They exit the dungeon without further incident.