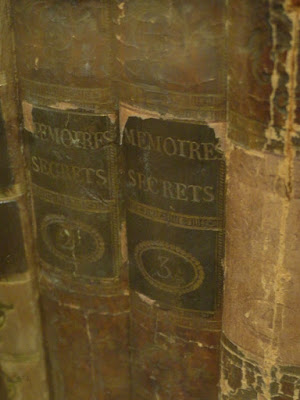 Lycinia shrinks into her cloak for protection against the driving rain as she hurries through the labyrinthine streets of Ildmarch. She told her companions that the Mage's Guild had agreed to help them with their quest as recompense for saving the three lost apprentices from the vile clutches of the mad witch Jola, but only she, as a magic-user herself, would be allowed to meet their benefactor within the halls of the guildhouse itself. Well, she thinks, it is mostly the truth, is it not?

She almost envies her companions pursuing their several goals in this storied human city. Brichtrethe, knight and priestess of the Light God (not necessarily in that order), had decided to recruit another warrior for her cause; for it was most certainly hers, and she would never scruple to let the others forget her Holy Purpose. The sow. Poor Ruprecht seems to have no will of his own, and was probably following his Lady Commander on her recruiting mission. For his sake, Lycinia hoped that it would take them quite a long time to find a suitable comrade-in-arms, lest Ruprecht be compelled to spend the rest of their time in marvellous Ildmarch listening to sermons in the Light God's church. Thiery -- that is, SIR Thiery -- was off at a gaming table somewhere. Manfred had sworn to kill him if he lost all their collected treasure at cards, and there were none but who believed the threat. Manfred, dutiful Manfred, had made a deposit in his sister Margiste's name with one of Ildmarch's reputable bankers, and wrote her a letter explaining all this, despatching a rider to Wandlebourne with all haste. Lycinia had quietly added some of her own loot to the deposit -- for what use have elves for gold? -- and added a few lines to the missive, sending her affection and inquiring about Margiste's progress with sword and spear. His duty admirably discharged, Manfred disappeared into one of Ildmarch's less reputable quarters, announcing his intention to spend the meagre sum he had kept back on the company of a handsome young man. Or three.

But these thoughts vanish as Lycinia passes through the gate at the end of the lonely lane, and finds herself once again before the great edifice of the Mage's Guild, lit from without by the glow of hoary magics, and where the lights in the alchemists' towers burn all through the night. She feels the pull on her soul, the promise of occult learning hidden within the shadowy halls, and she advances to greet the gargoyles scurrying down the carven facade to greet, or challenge, her arrival. 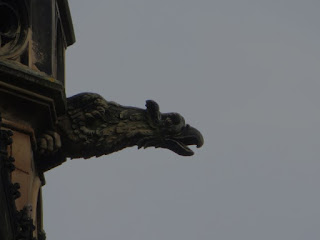 [As I have mentioned several times, the return to the dungeon on the island in Lake Ild was fun to play but would have been intensely dull to write up. It was pure DMG Appendix A door-monster-treasure, and whilst that made for a few fun afternoons, I couldn't countenance writing up that much combat. Since I'm switching game systems, I thought I could take the opportunity to just draw a line after the last post and start anew from there (even if it does mean the PCs lose that scroll of Cure Serious Wounds & Remove Curse and the Wand of Haste). I'm keeping the general flow of things, which involves Lycinia going on a side quest and then their return to the island to open the door in Hasshildaz' tomb. I know what the adventure will be on the other side. I decided to redo the side quest as it was a Call of Cthulhu-esque city investigation (which would have benefitted from skill rolls) ending in a small dungeon which was one of my very first attempts at making dungeons less monotonous, but still devolved into lots of random monster fights.

I'm going to run the adventure with Mythic Variations' Mystery theme. 'Move toward a thread' results on the Focus Table result in clues. When 3 clues have been found, our heroine may make a Difficult roll to ascertain the location of the end dungeon, using whatever skill or attribute roll seems appropriate based how the adventure is progressing. If that fails, the 4th clue allows a roll at Normal difficulty, and 5th and further clues all allow an Easy roll.

I'm using Midkemia Press' Cities book for random encounters; I'll roll any time she moves about within a district or crosses into a new one. Totally mundane encounters may be omitted from the narrative if, for instance, she just walks on by. She's not in the habit of starting a fight every time someone bumps into her on the street.

I used the d30 Sandbox Companion to generate an adventure framework:

Some of it might not come up, depending on the flow of things, but it's always nice to have something to interpret the Oracle round. I (as the DM) already know the entrance to the end dungeon; I was playing with donjon.sh one day and got a Weird Location from the Weird Random Generator which was such an inspiring image that I took a screenshot and saved it in my folder for this campaign.]

Orezuthía the Arcane receives the elf in her incense-perfumed chambers. She appears to have aged since their last meeting, the unplaceable agelessness having ceded to a decided decrepitude. Perhaps it is merely the insouciance for her attire; instead of a voluminous wizard's robe covered in mystical sigils, she is clad in a threadbare peignoir over a frilly purple nightdress.

"It's been over five months since you last were here. I was beginning to think you weren't going to return."

"Five months?" says Lycinia. "Hardly a drop in the ocean of time."

"For an elf, perhaps... But do come in. Sit. Um, just put those scrolls on the floor... Now, as much as I'd love to hear of your adventures, I'm afraid that will simply have to wait. There is a pressing matter which weighs heavily on my mind, and I require your assistance. Do this for me, and I may be able to secure a position for you in the Guild. Or perhaps help you and your little friends to open Hasshildaz's door."

"Let's not dissemble. This isn't a request I can refuse, is it?"

"We begin to understand one another! But I can indeed open the door."

"Geredrom, Walker on the Hidden Path, Thaumaturgist Peerless, Cantor Occultorum -- and a right pratt, if you want my opinion -- has gone missing from the Guild. He was always destined for a bad end, and the others believe he's met one, but I am not so sure. It would be best if he did, for all of us, probably for all of Ildmarch. I found this drawing amongst [1d6=]his papers. I don't recognise any of these sigils, but they haunt my nightmares. I need to know what he's planning. And..."

"So there's absolutely no chance of him trying again."

"Why are you being so circumspect?"

"Decorum, I suppose. One oughtn't make such requests, especially about fellow Guild members, even those with such unspeakable... proclivities. But I need absolute and utter certainty."

"This, then, is the price for your assistance with the door? I may have been exiled from my homeland, but we elves have a certain decorum, too."

"Do not refuse me girl. You forget, the Guild's good favour towards you is dependent upon my favour."

"So where is this Geredrom?"

(even = major street, odd = minor (this matters for the Cities encounter tables); the Mage's Guild is in the wealthy quarter of Old Town on a minor street of its own, but only there is only a 10% chance of random encounter nearby.] 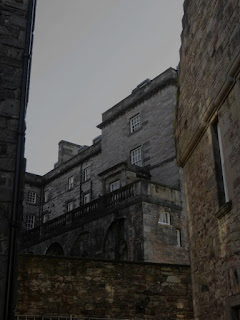 The light is fading from the sky when Lycinia leaves the Guild, but the rain has finally stopped. She makes for the merchant's quarter, whose streets are surprisingly busy.

As Lycinia weaves her way through the crowd, a young woman in simple but costly wizard's garb walks right into her.

"Watch where you're going, you elven thug! And mind you don't bump into an honest citizen with that arsenal you're carrying.

Lycinia bites her lip and tries to be diplomatic. "Sorry,  didn't look where I was going. We elves are unused to such throngs. I'm actually on guild business."

"Sure you are. But far be it from me to come between Orezuthía's villein and her... orders." [prejudiced - belief - allies]

"Orezuthía is indeed my sponsor, and she's asked me to look into something for her. Nothing more."

"So you admit she's set you a task! I almost pity you. But now I bid you good evening." 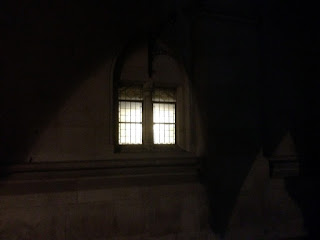 Lycinia reaches her destination without further incident. Orezuthía had told her of a sage whom Geredrom was known to consult. The windows of the sage's house are glowing in the twilight, and when Lycinia knocks a servant ushers her right in for an interview.

"Geredrom? Why should you be looking for him? You're mad! Stay away, stay far away! He's headed for disaster, dabbling in such things as man -- nor elf -- was never meant to go near."

"But I must find him," insists Lycinia, "and bring him back to my... my friend at the guild."

"Your friend at the guild? Why? What does she want with him? To use his evil knowledge?" [inquisitive - suspicion - last scene]

"No, she wants him to stop. The guild takes a dim view of wicked magics."

"Your little venture couldn't possibly go wrong, now could it? At least you've no soul to lose in the bargain, elf." [scheming - plan - flaws]

"Will you help me find him?"

"He came to see me a few days ago, asking what I knew about human and animal gestation." [d30 on the sage specialty table = biology & anatomy]

"It's a big topic! But his questions had a decidedly sinister cast to them, so I turned him out."

"Where else could he go? I've got to find him. Is there anyone else in the city that would have such knowledge?" 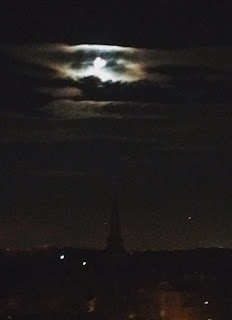 next post: our heroine stumbles upon a lead...
Posted by Alea iactanda est at 11:50