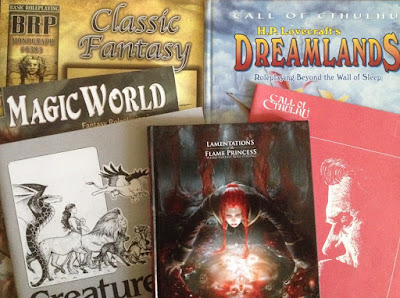 Converting the campaign from one game system to another proved to be about ten times as much work as I had expected -- and that's not counting the time I spent agonising over the decision beforehand.

I wanted/needed to cleave pretty closely to the setting I have been playing in, because I don't want what has come before to seem like it couldn't happen in the same milieu, but at the same time I thought it would be nice to divest the game of certain D&D-isms which always end up bugging me in long campaigns. To be fair, LotFP banished a fair few of them already, but not all.

So I ultimately decided on a Frankenstein's monster version of Chaosium's BRP. Mostly I'll be taking pieces from the Big Gold Book (BGB) and the Classic Fantasy monograph (CF), but there are some pieces of 2nd and/or 6th edition Call of Cthulhu (CoC), 2nd & 3rd edition Runequest (RQ), and Magic World (MW) in here too.

The BGB has a great checklist of optional rules, so I used that as the basis of my campaign 'system reference' (for lack of a better term).

Cultural Modifiers (page 38): So far, human and elf cultures receive an additional 20% in Speak Other Language. Humans from the campaign area visited so far must take whichever of the two common tongues is not their native. Elves mostly receive the Low Common tongue. I'm also setting Status at a base 50. It may be raised with skill points or lowered to spend the skill points elsewhere, as required.

Total Hit Points (page 30): Actually going to try this for PCs and important NPCs, since CF spells are scaled for it. If the PCs start to feel invulnerable, I'll revert to normal HP [(CON+SIZ)/2, instead of CON+SIZ].

Distinctive Features (pages 34-35): when needed to flesh out character descriptions.

Freeform Professions (page 41): If needed. I may also use some from CoC and MW.

Aging and Inaction (page 183): Owing to the high body count, this will probably only be used for magical aging....

Skill Category Bonuses (pages 20, 31, 48): The complicated ones (which may even yield penalties), like in 3rd ed. Runequest.

Complimentary Skills (page 50): When it seems appropriate. And I remember it...

Literacy (page 67): Since my campaign is very very roughly set in an analogue of 1550s southern England, I did a quick web search and found historical illiteracy rates for the early modern period in Europe. About 85% of England was illiterate in 1550, so definitely assuming illiteracy as the default. BUT, I will assume all PCs (and important NPCs) are literate. To this end, I am also using the rule from 2nd ed. Call of Cthulhu, where the lower of Read/Write or Speak is never less than half that of the higher. Illiteracy thus grants bonus skill points equal to only half the character's Speak Own Language skill.

Encumbrance (page 180) and Fatigue: I'm going to try the rules in CF, but if I don't like them and/or keep forgetting to use them, I'll change to Fatigue Points (I've often heard they're too much bookkeeping or too complicated, but I've never understood why).

Eliminating or Reversing Statement of Intents (page 188): Kind of pointless for soloing. Especially since I'm going with

Initiative Rolls (page 188): I like more variability than Strike Ranks or strict Initiative-by-descending-DEX.

Power Use in the Action Phase (page 189): spells will need good initiative too.

Dying Blows (page 199): I don't like cinematic action, but this has decidedly literary overtones.

Splitting Attack and Parry Skills (page 199): Not only using it, but I'm also splitting the Skill Category Bonuses; Manipulation for Attack, and Physical for Parry (as in 3rd ed. Runequest).

Personality Traits (page 294): mostly for NPCs, and new PCs until I get a feel for them.

Prices: I'm going to assume being on the brink of war has caused inflation in the kingdom to go wild. To this end, I am going to use the 3rd ed. RQ prices (I always liked the variable prices for urban/rural weapon & armour purchases) and the 2nd ed. RQ exchange rates 1 gold = 20 silver = 200 copper).

Character Classes Are Too Old School (CF p. 49): I think the CF classes feel more AD&D than B/X, so I am dispensing with them in favour of BRP Professions + Powers. Magic-Users get M-U & Illusionist spells, Clerics get cleric spells (and Turn Undead is a spell as per LotFP). Any Druids will probably be NPCs, and dealt with as and when. Paladins, Monks, Rangers, and Bards really don't fit my setting. Barbarian is a culture, not a profession. Fighters and Specialists (Thieves) are fine as just professions, without any special powers.

Magic: I'm using Classic Fantasy for the base magic system(s), as above. I will probably not be using Fireball, Lightning Bolt, and the other big damage spells to keep with the LotFP ethos. Instead, I'll be raiding CoC and its supplements, especially Dreamlands, for a healthy dose of weird magic.

Skill Improvement: All experience rolls are 1d6, regardless of "profession skills".

Firearms: Some lovely person put the additional BRP rules for Mousquetaires & Sorcellerie (Musketeers & Sorcery, from a special edition Casus Belli magazine) into a PDF. I will be using the périls des armes à feu (dangers of firearms) table for missed shots (if the roll to attack fails, the character must roll against Luck; a failure necessitates a roll on the table).

Armour & Magic-Users: CF allows M-Us to wear any armour, but they suffer a penalty to spellcasting when so doing. This is either the same penalty the armour applies to physical skills, but with a minimum of -10%. To better model the LotFP way of doing it, I will be ignoring the minimum, so the lighter armours impose no penalty.

Skill List: I used the CF character sheet as a starting point, and made a small number of additions and modifications, mostly renaming certain skills to the versions I am most familiar with (usually the CoC ones!) to speed play. However:
Character Sheet: This is my most current one. It's functional, but may need to change, especially if I figure out a better/easier/funner encumbrance  fatigue system.


Next post: converting the PCs. Hopefully soonish, so I can get back to the adventure.