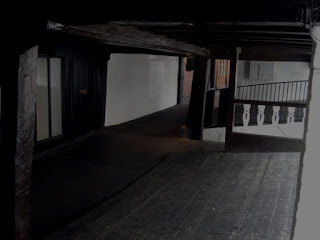 The next morning, Lycinia heads off to find Rannard d'Otorio's shop. As she passes by a dark, narrow alley, she overhears a snippet of conversation between two unseen individuals.

"I trust the advance is sufficient."

"Absolutely. You may be sure that by this time tomorrow, Devnal shall have breathed his last."

[Encounter: overhear assassin talking to employers. 85% that the assassin will attempt to silence the characters if they notice.

Lycinia walks quickly but softly by. "Perhaps I should have asked Orezuthía for an advance," she thinks.

Chaos: increased to Out of Control (1d8)

Setup: to the importer's shop

[First, some outstanding business from previous scenes--
Q: Will there be any fallout from the last scene (notary's house carnage)? 50/50: O1 C1 - No, and... by the time the bodies are discovered the adventure will have concluded.
+Event: NPC Negative - Sage - behold / horror : sage sees beyond this reality, permanent insanity.
Q: Will/did the woodsman get away from the city watch? 50/50: O4 C5 - no.] 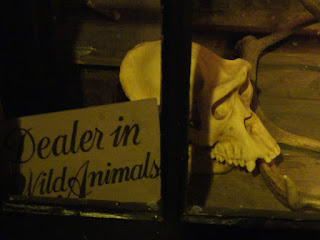 The importer's resembles nothing so much as an apothecary's shop -- or a witch's hut. Strange vessels and boxes of wood, metal, and glass hold the limbs, bones, eyes, fur and occasionally intact cadavers of a myriad of animals, recognisable and otherwise. More hang from the ceilings, and pride of place is given to the dried body of two-headed, six-limbed crocodile which stretches the entire length of the interior. Behind a desk in the midst of this menagerie sits Rannard d'Otorio himself. His more-than-ample frame is swathed in the finest silks, and weighty golden rings burden his pudgy fingers. Seeing Lycinia enter, he looks up from his account book with a gleam in his eye.

"Friend elf! How may I be of assistance this fine day?"

"I'm trying to find a guild wizard, with whom I've heard you do business."

"Dear lady, I supply a number of guild wizards with the rarest and most unimaginable wares. I dare say that without my humble business, the guild would be practically bereft of components for the Art. So you'll have to be more specific."

"Oh yes, he was here, the boor! Would you believe, he argued with me about the price of the merchandise, said if I understood the importance of his great work I'd not be so greedy."

"Did he say what the great work is, perchance?"

"No, and I didn't ask! I concluded our business as speedily as I could so he would leave my shop."

"I was told he bought live serpents. How many, if I may ask?"

"[1d10=]Half a dozen! Can you believe? It took me more work than I'd care to think about just to secure one of the beasts."

"Did you deliver? or did he take them with him?"

"Light God protect me! I didn't have them here; I'd have been eaten alive. No no no, they were kept safely in my warehouse in Frommsport. He had me -- that is, my drayman -- deliver them to a farmstead some little way from the city. Now, are you familiar with the roads leading to the Châteaux Pruduems and l'Oret...?" 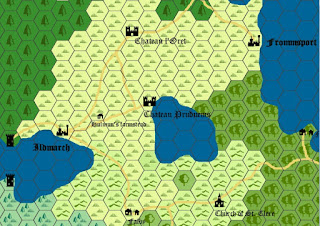 Setup: to the farmstead
d8=Altered (see below)

Lycinia decides to retrieve her armour for the journey, even though it's scarcely four miles out of town. But she finds she must postpone her trip, as the heavens open up and the winds howl, and she must seek shelter from the driving rain. She finds a reputable-seeming tavern on the outskirts of the new town in which to wait out the storm. Her choice of such a dull hideaway is motivated solely by the desire to not run into any of her friends; she'd rather not talk about the task she's been set by her 'sponsor'.

Lycinia sets off on the road early the next day.

She has not gone far out of the gates before she comes upon a young man in travelling clothes walking the opposite way. He has a fair complexion, a mass of unruly brown curls and beaming grey eyes. A golden amulet in the shape of a windmill is the only embellishment of his otherwise simple attire.

"I'm off to join the guild and become a wizard!" he chirps.

"What do you mean by that?" 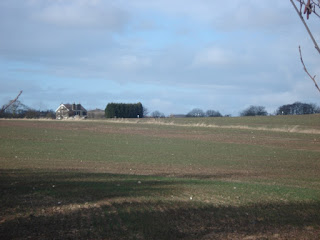 Hulmun's farmstead is well back from the road, but Lycinia can see it in the distance on the crest of a hill. After a short while she finds a dirt track leading from the road through the fields.

Lycinia notices a trio of wild-looking, filthy, farmhands creeping round the front of the farmhouse brandishing a scythe, pitchfork, and sickle.

They do not see the elf, for all their attention is focussed in towards the rest of the farm. Then suddenly an awful wail pierces the silence. The madmen stiffen as they hear it, then abruptly [d3=3] they all run off to investigate its source.

Lycinia crouches down in the corn, and uses her magic to become invisible [taking an extra round for +16%, rolls 14 anyways: success. She spends 4MP or the spell, leaving her with 8]. She creeps up to the farmhouse and slips in the open front door.

She takes a cursory look round, but finds nothing out of the ordinary. Nor is there anyone within. She peers out of an upper storey rear window towards the outbuildings...

...and sees nothing amiss at first. Then she notices a dead goat lying in the mud not far from the barn. Some dead chickens are scattered nearby.

More screams emanate from the barn, this time in more than one voice. But silence abruptly returns. Lycinia leaves the house. She is creeping towards the barn as her invisibility spell ends. 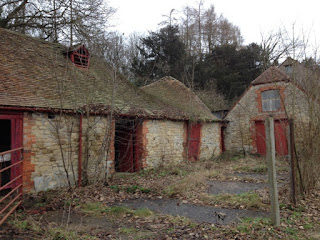 Lycinia peers into the darkness of the barn, but even her sharp elfin senses cannot pierce the gloom [Spot Hidden (69%) at Normal difficulty due to low-light vision, but d%=83, fail]. But the Thing inside can see her silhouette in the doorway, and it launches a volley of quills at her, which whiz past her head [it missed].

[I spent perhaps way too long making a random demon generator in Excel, which uses the rules found in Advanced Sorcery (Magic World supplement) combined with hit location tables from the BaSIC bestiaire by Antonéus.


It works pretty well, though I haven't cleaned up the output for ease of cutting & pasting yet. And the hit location tables are still in French. Tant pis.]

[Round 1 - Initiative: it 23, L 22]
Another volley of quills fly out of the darkness as Lycinia peers inside. In the deep shadows within she can make out a long, almost human-sized form, crouching low to the ground [Spot Hidden succeeds, so she can attack]. She raises her pistol and fires. [Pistol skill 37%: 07, Impale! 2d6+2=9 damage, -3 for its armour  results in 6 damage to the tail, reducing the location to 0 (no more quill attacks), with 10hp left in total]

[Round 2]
Lycinia backpedals round the front of the building and switches her pistol to her left hand (not wanting to just toss it into the mud) and draws her sword. The nightmare thing scuttles forward out of the barn and into the light. It is a dripping mass of sinew and muscle, looking as it had just been skinned. It drags its torso along on two distended, backwards-jointed arms. In place of legs its abdomen tapers into a long meaty spike-tipped tail, which now is dragging limply behind; two holes leak a black oily ichor where Lycinia's ball pierced it. The thing's head is a long rubber tube ending in a toothy maw. It has no eyes of which to speak, but the elf has no doubt but that it see her, as it scurries at her, teeth gnashing, but she evades the slavering jaws [bite (50%): 26 hits. Lycinia dodges (63-24 encumbrance =39%): 31, success].

[Rounds 3-4]
Lycinia and the creature dance round one another, but neither has the upper hand. Her sword dissuades the jaws from coming too close [parry 61%], but neither can she score a hit on the surprisingly nimble beast [dodge 49%].

[Round 5]
The things pulls back as if to strike, but instead throws its "head" back and emits a high trill. The sound is felt more than heard, and Lycinia must steel herself against the sensation of all her nerves resonating with the awful noise [it uses its Sleep power, matching it POW vs. her CON (+3 bonus for elf): 8 vs. 17, 95% to resist, which she does]. Shaken from the neural assault, her swing is well wide of the mark.

[Round 6]
It springs forward, the jaws coming straight for Lycinia's face, but at the last moment she interposes her glittering sword, and the teeth clack against the cross guard [bite 06, special success, but her parry rolls was 01, critical]. It pulls back, and Lycinia drives her blade down onto its shoulder, cutting deep through the viscous slime and nearly severing its arm [(1D8+1=)9-3=6 damage, down to -2 in the limb, 4hp total remaining.]

[Round 7]
It stomps toward her furiously, balancing on one arm, but she easily fends of the clumsy assault [bite succeeds, parried]. Her sword flashes out, cutting deep into its sternum [dodge fails; 7-3=4damage, to 0hp]. It flops down, twitching and oozing. With both hands Lycinia plunges her blade through it into the ground. Its struggles cease.

After wiping the foulness from her sword, Lycinia opens both of the barn doors to shed some light on the interior, but the horror that greets her gives her pause to regret the decision. The corpses of the three madmen are just a little way inside, bristling with the quills that ended their lives; these she had expected. But in the back, beneath the hayloft, there are the suspended bodies of five more of the farmer-folk. Four of them have been attached by the wrists to four of the support beams holding up the loft, the fifth is attached to the back wall. Their stomachs have been opened, and their entrails pulled out and strung together to form the design of a magic circle. And worse, one woman yet lives, and regards the approaching elf with dull, uncomprehending eyes.

"Sleep now," whispers Lycinia, and uses her magic to bring the dying woman into a gentle slumber.

Lycinia can find nothing else of importance at the farm. She wraps a grisly trophy in cloth and conceals it in her pack for later study (she hopes) back at the guild. She sets both the barn and the farmhouse ablaze, and does not set off on the road back to Ildmarch until she is certain the fires will consume all the evils of the place.

next post: wizardry and revelations
Posted by Alea iactanda est at 12:16