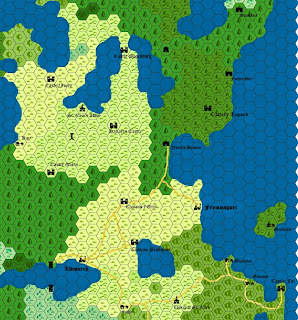 Setup: go meet up with Vampire hunters & join their quest

The party follow the road as far as the walls of Ildmarch, then head SE to the church. The day is cold and overcast, but aside from a few sprinklings of rain there is no precipitation.

There see almost no one on the road, save a group of three footsoldiers. The soldiers are none too friendly, but willing to exchange news with strangers to the region. They are deserters from Yseut's Bastion heading to Ildmarch to avoid the coming war, and advise the party they should leave this region before it's too late. 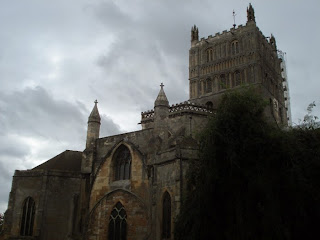 The party make the Church of St. Clere by evening. The church is an imposing edifice; it would be considered a cathedral were it in a city. There is a service going on as they arrive. The elves wait outside nervously as Aldira goes in to look around. At length a novitiate comes out to tell them they are required within. They tether their horses and walk slowly up the steps into the church, where they see group of four humans, three men and a girl, standing with Aldira.

The one who is obviously their leader is a tall, broad-shouldered man with a commanding voice and piercing eyes. He looks to be in his mid-forties, with flowing grey hair and moustache. There is an aura of authority and power about him, which almost hides his rather unhealthy pallor. He wears a tall black felt hat with a brass buckle, understated travelling clothes, a dark grey cloak, and a silver holy symbol of the Light God.

The man next to him is all in black, practically hidden beneath a long black oilskin cloak and a wide-brimmed leather hat. He has the look of a hunter, or perhaps a hired killer, though he's perhaps a little young. He too wears a silver holy symbol of the Light God.

Behind him stands a man in leather armour, evidently a soldier. His hair is long and unkempt, he hasn't shaved in about a week, he has a nasty scar on his forehead and is missing half his front teeth. But despite his rough looks, he has a friendly and open demeanour.

Behind the three men stands a rather vacant-looking peasant girl, trying her best to stay out of the way and occasionally wiping her nose on her sleeve.

Aldira is about to make introductions when the leader strides forward and begins to speak, "Your friend has told me why you're here, and what you want from us. It seems an alliance would be to our mutual gain. We are hard on the trail of a coven of vampires, and you would see that this elven renegade cannot use their blood for his unholy sorceries. It seems we are fated to accept your aid in our sacred quest. We are servants of the Light God, the Pure and Radiant, pledged to rid the world of these most foul fiends of darkness. Your quest seems noble and good, aye, or we should not be talking at all, but it comes only from the lords of faraway Feyalldra, whereas ours descendeth from the True Light that Guides the World. You may come with us only so long as you accept the primacy of our quest and respect our sacred vows. Now, there are those, even within the Church, that mistrust all sorcerers and fairy-kind and bethink them servants of wickedness. I should be embarrassed to be so unenlightened! Magic is a tool like any other, and its wise use can uphold the glories of the Light God even as does the knight's steel. But know this: I will brook no use of the darker kinds of wizardry, and will suffer no artifacts of tainted magic to go unburned in cleansing flame. Are we agreed?"

"We are agreed," says Lycinia quickly.

"Good. Then let me introduce us. I am Father Rochouart. This is my associate, Géraint [the black-clad man makes a sweeping bow], his bodyguard, Worland [the soldier smiles warmly] and this is Haddie [the girl makes a clumsy curtsy], whom I have hired as a lantern-bearer."

[I decided to make them all NPCs, two PC equivalents each with one hireling. If any of them survive long enough and end up fitting into the party, they may graduate to PC status like Aldira did. As I am making them from scratch, they will start with 10% less XP than the PC with the lowest total and standard equipment according to the LotFP rulebook: 180sp +3d6x10sp/level over 1st. The henchman is a starting 1st level character. The lantern-bearer is a 0-level human with the clothes on her back and a free wooden holy symbol (value 1cp). Here's their stats, followed by the PCs', for reference:


The PCs also have 4 riding horses whose saddlebags contain iron rations, waterskins,  and camping gear. They also left a few books and things (including their treasure map) in Castle l'Oret for safekeeping.

Q: Has Neldir tried to contact the hunters? Unlikely: 41, Yes.
Q: How'd that go? Propose / Power : Neldir made the wrong sort of offer and was turned away. But they didn't quite realise what he was after, so they let him go with only a stern lecture from Father Rochouart. He definitely regrets his mistake.


That evening the PCs and NPCs spend a bit of time getting acquainted, and planning their journey on Théscine's (formerly poor Oighonlaer's) kingdom map. The hunters are (randomly determined) heading to  Citadelle Tagnard on the trail of the vampires (rumoured to be) there.]

The next morning is cold and windy, and the though the black clouds presage a storm, the party decide to set off on the road towards Ildmarch. Lycinia and Aldira let Father Rochouart and Haddie ride their horses. A journey of 24 miles by road should only take a day's travel, but a driving rain begins to fall. They manage to reach Falby by evening, and the kind villagers provide them with food, shelter and warming hearth fires.

The storm abates. The party make Ildmarch without incident, though they do pass a group of rope merchants on the road, off to sell their wares on the docks of Frommsport.

Ildmarch is a large and prosperous city on the shore of lake Ild. Great are the walls that encircle the New Town, greater still the walls of the Old Town within. The New Town may be newer, poorer, and less important than the Old, but the elves still marvel at the cobbled streets, the tall buildings of wood and stone, the and endless variety of shops and markets. Seeing their wide eyes, Worland tells them, "To look at it, you'd think this was the capital of the Kingdom, instead of Aylesbyrig."

As much as they wish they could explore Ildmarch, the elves are eager to get on with their quest. They stay the night in a quiet inn, meeting no one but a visiting sage who has more to say about the wines of the locality than he does about his research (metaphysics and supernatural flora & fauna).  In the morning they buy provisions at the nearest market. In the interests of speed and goodwill, they purchase riding horses for their new companions.

The journey from Ildmarch to Yseut's Bastion passes without incident [save brief and uninteresting random encounters on the road]. The party stop briefly at Chateau l'Oret to bring the Baron up to date, then continue on to Yseut's Bastion [Q: Do they get a good reception? Somewhat likely: 01, Exceptional Yes.] where they are fêted like conquering heroes; evidently vampire hunters are admired by the soldiers in the fort.

The party travel through the dense forest towards Citadelle Tagnard. After about six miles they happen across a young woman in a forest clearing, examining the carcasses of a pack of wolves. She is well dressed, though appears a little uncouth. Two silent, liveried servants are nearby, with a trio of horses. She calls out to the party as she sees them, and introduces herself as Lady Delphinia of the Citadelle Tagnard. "So many wolves about," she explains, "and those useless clods at the bastion won't lift a finger to stop 'em. Bad for the herds, it is, and for the horses. I killed me these ones last night. Just checking they're not wandered off all undead like. There's way more'n last year, too. That's how I come know what there's vampires about. Sent me steward down to St. Clere's to get some help. You the ones they sent?"

The Lady Delphinia explains that it's not her castle that's infested; she is acting for the good of the region. The commander of Foehrenfort had written to her recently for assistance, saying that some of her soldiers had contracted a mysterious wasting disease. Lady Delphinia is certain that this is the fault of the vampires, and Father Rochouart concurs. The party make for Foehrenfort with all haste. 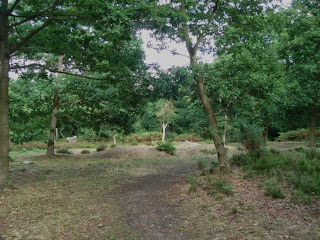 Session & Background Notes:
The forest encounter rolled on the table (D&D Expert rulebook) was actually a Wereboar. But as I rolled an 11 for her reaction, I decided she would be in human form, and the party would never have an opportunity to realise it. She is of course the one who killed the wolves the previous night. I'm adding her to the Mythic NPCs list to see where it leads.

I rolled for the truth of the rumour that there were vampires at Citadelle Tagnard, and it came up as Mostly False. Since there was an Exceptional Yes about vampires from Mythic, I moved them to the next closest unexplored location.


Since the PCs are wandering through the politically unstable region and have essentially joined one faction to oppose the other, I felt I needed a quick overview of who supports/opposes whom. The relationships were determined by a roll of 1d6-1d6, to give a result of +5 (staunch allies) to -5 (sworn enemies). The leader of each location personally holds these views, though their followers will mostly echo them and obey commands accordingly.

The last two are not present in the region, but their influence and machinations are being felt. The fifth column is Orthodoxy, not a relationship but a measure of their adherance to the tenets of the Church of the Light God. The heretic de Molleré is the leader of the schismatics, de Val d'Oine represents the Orthodoxy. However, one's political ties to the houses of de Molleré or de Val d'Oine are independent of one's religious sentiments. The lord of Castel'Iverre, for example, has close ties with de Molleré but is antagonistic towards de Val d'Oine, despite sharing his orthodox sentiments.