Worldbuilding, and why I didn't do any

I've often heard it said that the more preparation you need for a solo game, the less likely it is you will ever get around to playing it. So when I decided to start a fantasy campaign, I wanted to do it with a minimum of set-up, lest it fail before the first session. I know a lot of people have a fantasy world they've been creating for years -- decades even -- but I'm not one of them. All the AD&D of my youth was set in Greyhawk. All I had was the boxed set, and I wasn't really interested in a level of detail beyond that. It was non-invasive, and provided ample room to tell whatever stories I could make up. After that, when campaigns gave way to more occasional one-shot adventures, the concomitant worlds had a much more ephemeral nature, seldom outlasting the session.

I was initially inspired by reading Tabletop Diversions' Ever-expanding Dungeon posts. That put me in the mood for some old-school D&D, which always conjures up visions of knights and castles in my head. I'd also been reading Fouqué's Der Zauberring; it's full of knights and castles, which always conjures up images of D&D (it's also the reason why all the post titles are lines from romantic poets). At first I figured I'd just use the genero-pseudo-medieval Europe of my youth, that nameless fantasy world we played in before setting became a real concern. But that was too high-fantasy for what I was after. I also wanted to use LotFP as the ruleset, which steadily won me over to using an early-modernish setting. I didn't want to set the game in the real world though, especially as I wanted the PCs to all be elves. But my campaign had to be set somewhere. So here's how I went about it.

I knew the rules set I would use (LotFP), the GM emulator (Mythic), the collections of charts for encounters &c (Basic & Expert set, d30 Sandbox Companion, some random monster & dungeon generators from Dragon Magazine and the 1st ed. DMG). More than enough to run a campaign with. I decided I would give the characters a starting quest, and let things develop into a sandbox (or not) on their own. So all I needed now was a world. Or at least part of one.

I wanted to try Hexographer, having just discovered it. After two or three false starts, I had tweaked the settings enough to produce a map with the right kind of terrain for what I had envisioned. It was randomly dotted with villages, castles, ruins, etc. I did clean it up a little bit: drew in some rivers and roads, put fields around the major cities, added more castles. Only about an evening's worth of work. Of course, as I did this, ideas presented themselves about what some of the locations might be, and what sort of people lived here or there, but I didn't write any of it down or worry about it overmuch. There was a big map full of unnamed features staring at me, but the more I tried to add to it, the less chance I would have of actually playing. So I left it alone. I decided that, since my PCs were all first level elves, they would never have left the Elven Forest before, and so had as vague an idea of what lay beyond as I did.

I knew there was a big human kingdom occupying the eastern half of the map. I figured out where the capital of the Kingdom was (though didn't name it until scene 18) and then named a handful of things in and around the elven forest. Nothing even got described until I was about to start the first session, when I wrote:

"Feyalldra is the great elven city in the Elven Forest (all the heavy forest west of the river/lake - Elves move through their forest as if it were clear terrain, and automatically find enough food and water). The stone circle is a meeting place for the humans and elves to conduct trade. Cheapington is (as its name suggests) a mercantile town that grew up because of the human-elf trade. The Church of St. Gelevaard is a church of the Light God, built on the very site where St. Gelevaard was martyred 1000 years ago. The climate and and pseudo-medievality is that of southern England circa 1550AD. There is a large bay 20 miles south of Cheapington, the ocean proper is 20 miles further south. This area is on the border of civilisation, so firearms are a bit rarer than in other parts (to the East). I'll make up / randomly determine the rest as I go." 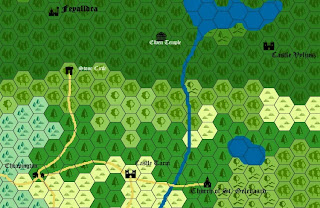 And I that was it. Some things had to be added to the map along the way. E.g. Wandlebourne and some as-yet-nameless town got added in a fit of logic when I noticed there was this huge protected bay that would be the ideal base for fishing and the sea trade.

But the first little paragraph, describing a mere 21x13 hexes, set the tone for everything that followed. It fixed the climactic, technological, and social base so that I could extrapolate all the mundane aspects of the world, and stick a low-fantasy overlay on top. Elements introduced in the first few sessions were a bit more random than those that followed. By now I have a feel for what definitely does and doesn't fit, and re-roll and/or modify tables accordingly. Here's some notes on how it played out:

Elves are a dying race, as presented in the LotFP rules. They are creatures of faerie, and live in the Elven Forest, wherein lies their wondrous city of (fair) Feyalldra. But that's only half of the great faerie forest. Across the river (this hasn't been shown on any of the small maps yet) is the Goblin Forest, where the ugly, twisted, and malevolent faeries live. The faerie forest is actually the first thing I made up, and the goblin half has simply never come into play yet: exactly the reason I didn't go naming every location on the map.

Goblins are creatures of faerie as much as are elves. They will use halfling stats, should it come up. There are no halflings in my campaign, because I don't care for them.

Dwarves are by the book. They live underground, but I don't know where their big city is yet. There's at least a big outpost somewhere within ~20 hexes of the Ruined Monastery, since rescue missions were sent to find the dwarven expedition that never returned from there.

I'm undecided about orcs. I don't need hobgoblins. Bugbears and kobolds will be extremely rare if indeed they ever appear. There is a far-off race of cynocephaloi (gnolls), but they don't live locally. Ogres compete for space with the hill tribes.

Or, if you will, pseudo-early-modernity. I chose 1550 to make it still a bit medieval; to be fair I've mushed some ideas from earlier into it, but I'm aiming for that vague sort of realm where fairy tales are from, not Montaillou, village occitan, de 1294 à 1324. Also, the main kingdom is small and civilisation does not extend far beyond it. I chose southern England for the climate because it's damp and rainy and I like it that way. But it also helped with other things, such as--

To start with, all I knew was that the main religion would be a pantheistic version of the pre-reformation catholic church. Since the first mini-map had a chuch on it, I had to figure out the patron deity on the spot; thus the Light God came into being. At first it was just a shorthand notation, but it ended up setting the tone for religion: the Roman model of personified ideas rather then the Greek gods with personalities. It's not the only human pantheon, just the only one in the kingdom. I guess I'll have to decide what sort of religion the elves have if they ever make it to the elven temple.

The trick for me was not over thinking this. I tried very hard to just use a nice D&D-style Common tongue for humanity, but I just couldn't leave it alone. So then, Common, which I mention several times in various adventures, is sort of middle English. It is the language of all the common folk of the Kingdom. Many of the noble families came originally as conquerors from the Continent, and so there's a second common tongue which is like old french, used more by the upper classes than the lower, though many people are likely to know both. Scholars and wizards will know an ancient language from a fallen kingdom of old (Latin), and may well know other ancient and esoteric languages besides. They are also likely to know one or more non-human languages (architects and engineers would tend to study High Dwarven, for example). Elves all speak Low Elven, which is sort of the elven version of Common and the dialect that non-elves learn. There's also High Elven, which is totally different from region to region (probably only Théscine speaks the continental tongue, as she's the only one with family ties to elves outside Feyalldra). There's also a literary language which no one speaks, as such: sort of the elf equivalent of Homeric Greek. Elves also learn the human languages of the region, and magic-using elves are taught the ancient (scholarly) tongue during their arcane studies. I don't know what the humans bordering the kingdom speak yet; maybe just different dialects of old/middle-English, or perhaps a pretend Celtic language. I'm not even sure if the kingdom to the north is even a human one yet, to be honest. Should the PCs venture that far on the map, I will figure it out based on whatever I'm in the mood for at the moment.

There I go off on a tangent. The point of all this was that I started with a very basic idea (it's sort of medieval England-y) and the details filled themselves in from there. When some -one/-where new crops up, I can either try to make up a fantasy-sounding name (Zormagax the Invoker), go for euphony (Ildmarch), or I can pick words at semi-random from a glossary, which is much simpler and sometimes more evocative. Sir Gaunet's name is old french for 'yellowish' whence we get 'gaunt' in English. His castle is from old English roots: hræfn (raven) + mor (moor). Chateau l'Oret (old french = 'wind') is in the middle of a windy plain. Sumpffort is by the swamp, Foehrenfort in the pine forest, etc. Some of it plays against type: the evil count lives in Chateau Pruduems (Prud’homme).


So there it is: my setting, or at least the apologia for its sketchy nature. The funny thing is, all the stuff I've written in this post is the stuff that developed in such an easy and natural fashion that I've never had to write it down; it's all in my head and informs every further development in the setting and every interpretation of the random idea generators. I hope that showing my work, as it were, and discussing the process of creation will be of some use to others.
Posted by Alea iactanda est at 19:28