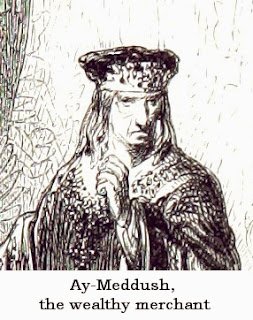 
Though she knows they would have nothing to gain by the murder, and everything to lose, Lachaidiga decides it would be remiss of her to neglect questioning the merchant and the caravan master. She therefore has her servants bear her across the neighbourhood to the residence of Ay-Meddush, whom she is pleased to find at home. The wealthy merchant agrees to an interview and receives his guest amongst the greenery and fountains of his roof terrace.

"Such a business!" says the merchant as he hands her a golden tray heaped with produce from his one of his many orchards, "I barely slept at all last night. The sight of that poor, murdered wretch was right there every time I closed my eyes."

"Did you see anything out of the ordinary last night?" asks Lachaidiga. "Anything at all."

"Barbarians eating with their mouths closed! No, that's unfair of me. They're a decent enough sort. Very direct. And they take their honour quite seriously. You know, I think I'd rather deal with them than any of our people. But to answer your question, no, I didn't see anything that gave me the slightest cause for alarm."

"So you don't have any idea who could have wanted to do such a thing?"

[Q: Has Ay-Meddush any opinions on incident? Likely: 50, Yes.
What? Kill / Investment]

"Well," he says, "these dealings are important enough -- lucrative enough -- to bring the chieftain himself down to discuss particulars. I would look to those who were shut out of negotiations. Burosu has always had it in for me, and Ammauya, and the ki-Yulgahts. I wouldn't be at all surprised to find that one of them had a hand in this!"

"I see," says Lachaidiga, smiling sweetly. "I'll be sure to keep them in mind."

chaos: up to 6; she didn't lose any ground last scene, but she didn't gain anything at all

Setup: roll of 2 = Interrupt (was: interview Huollof to dig for clues)

RQ6 lacks an NPC reaction chart (or I've overlooked it), so I just used the one in the back of Legend. His initial reaction is Friendly(!)]

After the second, disappointing interview, Lachaidiga heads once again through the city streets in her palanquin. She hopes the caravan master will know something useful -- and not keep it hidden.

Suddenly a voice booms out, "Hold there!" Her litter-bearers stop dead in their tracks as a unit of foot soldiers form a ring round them. Their leader, a tall and powerfully-built man wearing the headdress of an elite officer, steps up to Lachaidiga, smiling.

"That's enough!" he says to the troops. "We're all friends here." The soldiers stand down, and he addresses Lachaidiga directly. "I was wondering if our paths would meet. My, such an early start you made this fine day. Imagine the prefect's surprise to find you absent from your home when he came to call. Oh, how he wanted that to be suspicious! But you did tell the chieftain you would solve this mystery for him. So, lady, how's your investigation coming?"

"Hmph!" responds Lachaidiga, "No one saw a thing, no one knows a thing. They just point fingers at those whom they despise. I have little hope that interviewing the caravan master will prove any different."

"Good lady, I fear you are right."

"I-- We just need some sort of solid lead. Someone must know something. We must find out what that is before this blows all out of proportion. The Sorcerous Colleges are already involved. It won't be long until all the priesthoods start butting in."

"But is not my lady a representative of those most noble colleges?"

"Rather! It's but three weeks since I've completed my novitiate. I'd be lucky if any of the mages even remember my name."

"Perhaps, then, I should allow you to accompany me to see this caravan master. Perhaps two shall succeed were only one should fail."

Genembes walks beside Lachaidiga's palanquin as they continue towards Huollof's townhouse. They compare notes on the way. He and Lachaidiga have mostly uncovered all the same information, but he does offer up one tantalising clue: the victim was initiated into a mystery cult of which his parents strongly disapproved.

[Q: Does Genembes know which cult? Unlikely: 48, Yes. (random picture)
Q: Does cult have a temple in town? Unlikely: 87, No. Just a shrine on the God's Street.]

Setup: interview Huollof with the officer

[Q: Has Huollof any opinions on incident? Likely: 97, Exceptional no.
Q: Does Elite officer believe him? Likely: 58, Yes.
Does Lachaidiga? Insight roll of 31 indicates she believes him, too.] 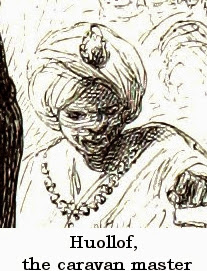 "I saw nothing. I did nothing. I know nothing. Before last night, I never have met these barbarians. I am never in this City, with it's walls so claustrophobic. Now I am thinking I should sell this house, and come back no more!" 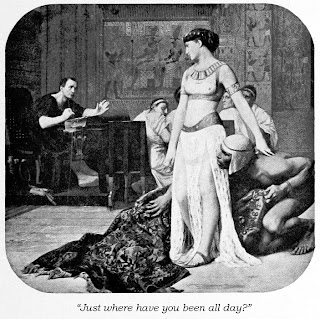 Lachaidiga returns home somewhat frustrated, but intent on searching her house once more for clues. Her older brother is waiting for her when she arrives.

[Using UNE to direct the scene: the NPC bearing is obviously Hostile. Rolling percentile dice twice to determine the conversation yields 37, Combat (I'll take this as general antagonism) and 74, Community. Result: the Hostile NPC speaks of Combat regarding the Community or, loosely, "what will the neighbours think?"]

"Just where have you been all day?" demands Lachaidiga's brother. "The prefect, unsurprisingly, came this morning as part of his investigation. When you failed to come down, he nearly sent his men after you to haul you before the magistrates on suspicion of having fled the scene of your crime. It was all I could do to convince him of the baseless nature of that accusation. I almost didn't try! It would serve you right to answer to this in the courts. But I can't allow your irrationality to reflect badly on our family. People will talk."

"Oh, come now, the prefect isn't so stupid that he'd allow his enmity to get the better of him like that. Then he'd look ridiculous, and people would most certainly talk then. Besides, Chieftain Ulevaard said he trusts me to investigate."

"I had not taken the mighty chieftain for such a fool! Why don't you show some sense and leave this matter to the prefect and his men?"

"You know I have absolutely no intention of giving up, dear brother."

"We'll see," he replies, "But it will have to wait. We have important guests coming to-morrow, and you absolutely must be here with me to receive them."

[Q: What is nature of the visitors? Antagonise / Ambush. Her betrothed!
Influence vs. Willpower roll to get him to say who it is: L:77, failure. Brother: 41, success.]

"Why? Who is coming? I'm useless in these business affairs. It would be better for us both if I weren't there, I'm certain."

"This isn't about business. Nor politics, nor anything else. It is a social call, with important people who are very close to our family. I will not have you insulting them by your refusal to greet them!"

The argument rages for some time, until one of the frightened servants (the drawer of the short straw, to be sure) approaches to announce that dinner is served. Lachaidiga snaps that she'll have it sent up, and stomps off to her room in defeat. 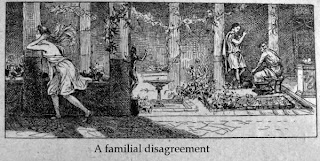