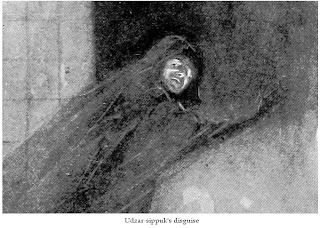 Setup: back to the tavern


Lachaidiga and Udzar-sippuk sit quietly in the gloomy colonnade for a quarter of an hour until they can finally breathe normally again [i.e. recover the level of Fatigue]. Lachaidiga then complains to her companion of the wounds she suffered in battle. The priest summons the healing powers of the great god Anzakàr, and as he holds his hands outstretched over his friend, her wounds miraculously begin to close. The sorceress meanwhile chants a minor charm of her own, so that the bloodstains disappear from her gown. Sadly, she does not yet know the spell of mending. Perhaps when this is over, she shall have to call round to her former master at the Sorcerers' College. For the serpent-folk, she reasons, never have tears in their robes.

[Udzar-sippuk only has a Folk Magic score of 38%. It took him 6 goes and 5 magic Points to manage to heal Lachaidiga's wounds. Fortunately the Heal spell will heal any location to full with a single application, provided it is only suffering Minor Wounds (has 1 or more HP left).

Lachaidiga  (Folk Magic 31%) had about the same luck, taking three attempts and 3MP to manage to successfully cast Cleanse.

"Help me move this thing," says Lachaidiga, as she takes the corpse by the hand. She grimaces with revulsion at the feel of its flaking skin. Udzar-sippuk stoically takes its other hand, and the pair drag it out of sight behind the great stone sphinx. "This will have to do. I don't want anyone to know what we've done here. Not yet at least. I can't trust the prefect's men to keep quiet -- and that would spoil everything. But I have a plan!"

Lachaidiga picks the ghoul's cloak up from the ground, and holds it out towards Udzar-sippuk. He looks down at it wide-eyed, but accepts it from her hands nonetheless. "Anzakàr protect me!" says the priest, "Somehow I knew this was going end up with me in that thing's cloak."

"So sorry, my dear. I'd wear it myself, but you're much closer to his size than am I."

"Sorry? O my darling sorceress, you're a terrible liar."

The pair make their way back across the City, down to the lower level. They wisely avoid Gods' Street and the Processional Way, so pass very few others on their way through the night-time roads and alleyways. 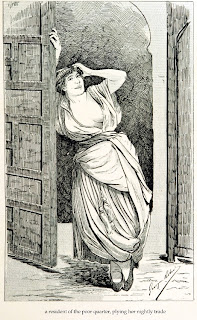 Their destination, that nameless square, is still quite lively, as persons of all stripes go about their various nocturnal affairs.

"Just as well I took the cloak," observes Udzar-sippuk. "If I were seen in this place, there would be talk."

He pulls the heavy cowl over his head, and marches slowly over to the spot that Lachaidiga indicates to him where she first saw the ghoul and its mysterious master. She herself disappears into her own cloak, and conceals herself across the square, to watch from the shadows.

Udzar-sippuk needs to make a Deceit (42%) roll vs. the villain's Perception (49%) in order to pass for the ghoul. The rolls are 82 vs. 76, both failures. The villain doesn't notice for now.

Lachaidiga must roll her Stealth (41%) vs. the villain's Perception to remain unnoticed. Rolls of 40 and 34 respectively both succeed; Lachaidiga wins as she rolled the larger number.

Now it is time to reveal the (randomly selected earlier) identity of the enemy.] 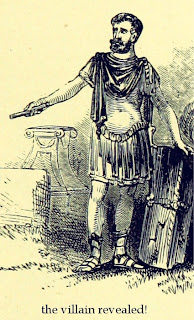 A well-groomed man in the armour of an infantry officer in Anzakàr's army appears in the doorway of the tavern. He looks round for a moment, then briskly crosses the square right over to Udzar-sippuk. From beneath his cloak he produces a bone wand. Waving it at Udzar-sippuk, he orders him to follow. Udzar-sippuk does his best imitation of the ghoul's gliding walk, though the soldier scarcely looks back at him.

Q: Where to now? random picture 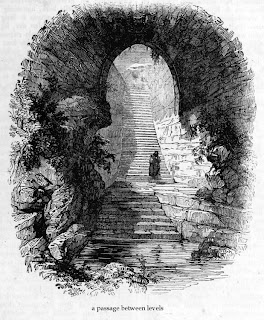 Lachaidga needs to make another Stealth roll vs. the soldier's Perception. 10 vs. 41; both successes again, but this time the villain's roll is higher, so he will notice her.]

The soldier leads his 'ghoul' out of the poor quarter, and begins ascending one of the grand staircases between levels of the city. The moon shines bright overhead, illumining the steep passage. The soldier chances a glace back over his shoulder, and sees Lachaidiga following at a distance. He peers at her a moment, studying her cloak, recognition coming slowly over his face.

Udzar-sippuk throws off the heavy, perfumed cloak. "We have you now, miscreant!"

Everyone will act simultaneously.]

[round 1]
Udzar-sippuk attempts to catch the villain and hold him fast, but the man fends off his assault [both miss in unarmed combat]. Lachaidiga raises her hands above her head and begins weaving a potent spell [she needs the full round to cast]. Udzar-sippuk comes at the man again [missing his attack roll], and makes the mistake of crouching low to avoid his fists. He kicks Udzar-sippuk in the face, breaking his nose and sending him careening backwards down the steps [rolling a critical attack gave him 2 special effects, Choose location (head) and trip. Udzar-sippuk fumbled his Evade roll to avoid the trip. He takes (1d3+1d4=)4 damage from the kick and another (1d6=)4 damage to a random location -- head again! -- from the fall. His head is reduced to -3HP, a serious wound].

Udzar-sippuk's head cracks against the hard stone. He fights to stay conscious, and just barely manages to arrest his fall [He needs to roll Endurance (20%)to remain conscious with a Serious head wound: 15, success. He uses his last action point to attempt to stop his fall; fortunately he manages to just make his Athletics (20%) roll].

The villain draws his sword [using his last AP] as Lachaidiga finishes the words of her spell. [Invocation (62%) vs. his Endurance (74%): 41 vs. 95, the spell takes effect]. The magic forces the air from the man's lungs, and he begins to choke.

[round 2]
Undaunted, the villain advances down the steps at Lachaidiga [the Smother spell causes him to gain a level of Fatigue this round]. She responds by drawing her own blade. Udzar-sippuk weakly tries to grab the man's ankle as he strides past, but to no avail. Lachaidiga prepares to defend herself, trusting in her magic to make short work of the soldier.

The villain makes a wild swing at her, nearly toppling down the stairs with the downward force of his swing [failed attack vs. her successful parry; she chooses the Overextend Opponent special effect, so he cannot attack on his next turn].

Lack of air is hampering the soldier's ability to fight, but he steadies himself, then comes at the sorceress again and again [a failed Endurance roll gives him 2 more levels of Fatigue. He and Lachaidiga both use up an AP in hesitating]. Despite gasping for the air that will not fill his lungs, his sword powers past Lachaidiga's defence and stabs just under her ribs [5 damage to the chest leaves her with 3 in that location], but fortunately does not bite too deep.

The man can barely see as the faintness showers his vision with snow, but he staggers forward with one last desperate attempt. His sword flies well wide of the mark, clanging off the side of the stone passageway.

[The Smother spell causes him another level of Fatigue. Also, both he and Lachaidiga must make Endurance rolls in round 4 to avoid Fatigue from the stress of combat. She makes hers, but the villain fails. He is now considered Debilitated; all skill rolls are Herculean difficulty (1/10 skill level), movement is reduced to half, and Action Points are reduced by 2].

He comes at her again, even more unsteadily. The slow, clumsy sword thrusts are easily side-stepped. The sword falls from his near-lifeless fingers. He makes a final attack, unaware he has dropped the weapon, then sinks to his knees, and collapses sideways on the stair. [In round 5 he rolls a 00, fumbling his Endurance roll. This gives him 1d3=2 more fatigue levels, putting him at Semi-conscious. Round 6 sees him go Comatose.]

Lachaidiga prods the unconscious man with her sword; he does not react. She rolls him over to study his face in the moonlight. The magic has run its course and he has begun breathing normally again.

Tearing some shreds from the villain's cloak, she trusses him up hand and foot as Udzar-sippuk crawls down to join her.

"Are you alright?" she asks the priest.

"I shall live to fight another day," he says, trying to staunch his bleeding nose with the hem of his tunic. "Though I'd prefer to avoid the fighting part in the future."

"My wardrobe and I concur," responds Lachaidiga, though secretly beaming from the excitement. "Take his sword and watch over him. I'll be back with the prefect's men."

And so saying, Lachaidiga rushes off into the night to find the city watch. 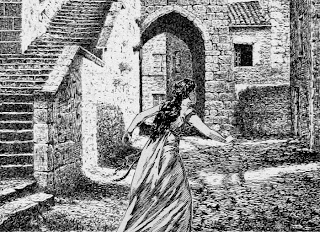