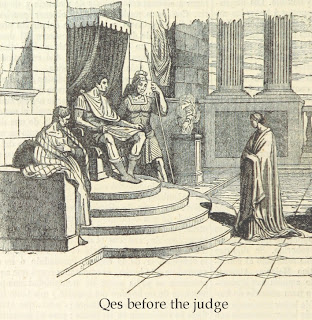 
The trial is concluded the next morning quickly, but with all due ceremony. The truth of Lachaidiga's testimony is evident even without supernatural confirmation. Mighty Anzakàr promises swift justice to those who date harm his people; she is sentenced to be buried alive in the desert, and taken away to her fate forthwith. Lachaidiga does not go to watch the execution, having no stomach for such things.

The wind blowing off the lake makes Ni'arouj nervous, as she watches it kicking up dust clouds over the sandy plain. She decides the caravan is not setting out again until the weather turns.

Being forced to wait in the village makes Lachaidiga nervous. They're scarcely a week out of Anzakàr; any pursuers, even had they set out a few days behind, could be on the verge of catching up with her. She has no doubt but that Enzzal will use his old army contacts to have scouts sent to track her down and drag her back home, perhaps even from their brother Nid-dallum's very unit. And Alkinu -- though the gods alone know how such a useless idiot could become so -- is an elite warrior himself. His comrades would almost certainly offer to help find his runaway bride.

The priest of Anzakàr offers her every hospitality, even providing her quarters adjoining the temple. He seems desperate for talk of home, and gratified to entertain a noble lady of rank. The two spend their evenings together in cheery conversation. When he is busy during the day, Lachaidiga swims in the lake or reads books form his personal library. She's still wary of having offended Ni'arouj, and gives her a wide berth.

On the third evening, Lachaidiga is reading quietly under the shade of an obliging palm tree when the priest comes to find her. "My lady," says he, "an elite warrior has just arrived in the village, and he's asking after you."

She is on the point of attempting to flee when a loud voice stops her in her tracks. "Lachaidiga, my dear friend! A happy day it is whenever I see you!"

"Wihiyaba!" she cries, and runs up to him, throwing her arms about his neck, hugging him tightly as he spins her round, her feet dangling several spans from the ground. He sets her down gently and steps back to look her over.

"You're looking well. The desert must agree with you."

"Hardly. My face is bright pink and there are tangles in my hair and not even my magic can get all the sand out of my linens. Oh, and look! I've a battle scar of my very own now."

"Whatever has happened to the girl who tried to hide in the command tent to avoid drilling with spear and shield?"

"Someone tried to kill her... but come, we've things to discuss. Privately."

The priest bows and excuses himself as Lachaidiga leads Wihiyaba down to the lake for their interview. She stretches out in the grass whilst he sits down beside her. 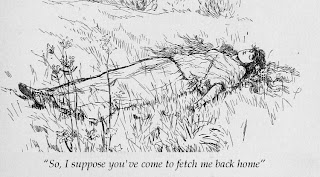 "So, I suppose you've come to fetch me back home," she says after a long silence.

"That is the mission for which I volunteered."

"You know I can't go back, don't you? At least not for a while. Not until things have settled. How bad is it?"

"You've caused quite a commotion.  Enzzal is in a constant rage, and has vowed to do everything within his power to bring you home and see -- how does he put it? -- that you do what's expected of you. He's petitioned your godfather to perform an official augury, but the clergy of Anzakàr will, of course, never get involved in purely familial disputes. For a few days he was convinced you were hiding in the sorcery college, and some serpentmen, I hear, had to forcibly eject him from their doorstep. He has pulled some strings, though, and gotten the army involved. Well, some scouts form his old unit. And some of us in the elite cadre have volunteered to help for Alkinu's sake -- esprit de corps and all that."

"So Enzzal is going round offending everyone in the City, and yet somehow it's all my fault!"

"I have not come to assign blame. But, you know, you're not entirely innocent in this matter."

"Hmpf! If he had listened to me, none of this would have been necessary in the first place! It is he who forced my hand! And he who is still trying to make me submit to his will, sending the army all the way out here to find me."

"Your family is still very powerful in Anzakàr, and has many friends and allies. And as a family friend, I could not refuse to help. Indeed, I stood in the presence of the sacred axe, and swore a solemn vow that, though the desert be full of terrors, I should brave them all to find you."

"And so have I found you. My oath is fulfilled."

"As if I could! But honestly: you saved my life. I owe you at least this much. Alkinu's not a bad sort, but I understand why you wouldn't want to marry him -- or anyone else your brother picked out for you."

"I cannot tell you what a relief this is. But what will you do now?"

"I mustn't return yet to Anzakàr. That would look suspicious."

"Come with me to Hasharu."

"And whatever shall you do there?"

Setup: head back into the desert

After two more days of leisure by the lake in Pahem, the threat of sandstorms being past, the caravan once again continues in to the desert. Wihiyaba goes with them; Ni'arouj does not begrudge him food or water; she is pleased to have an elite warrior in addition to the sorceress for protection.

From the village the caravan travels down the shore of the lake and into the rocky hills for a day. The next two days see slow progress through the hills. The hills are nearly devoid of life. Only once is there any sign of life, a wisp of smoke rising in the distance. Lachaidiga and Wihiyaba are sent ahead to investigate, fearing that it be the cooking fire of a group of bandits. But it turns out to be a priest and a small group of worshippers, making an expiatory sacrifice to the gods of the air. 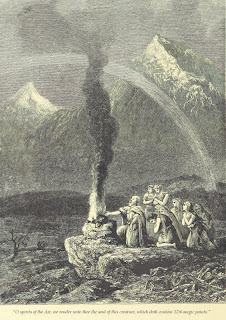 The caravan continues past them, leaving them to their worship. Everyone is exhausted from the journey, and anxious to make the oasis by nightfall. Led onwards by the promise of cool water, shade, and rest, they wend their weary way over the unforgiving terrain.

But when they crest the last hill before the oasis, they look down to see a horrid sight [the Remote Event rolled back in scene 2]. The body of a man is silhouetted against the pool, lashed onto a great wooden pale. 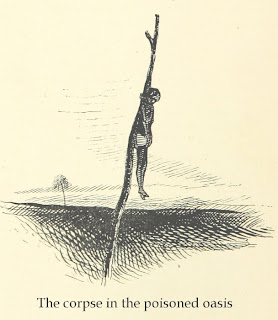 Ni'arouj orders an immediate halt. She dispatches Lachaidiga and Wihiyaba to investigate. They creep forward, but soon find the place to be deserted. The man appears to have been a warrior -- possibly one of Anzakàr's elite -- and dead for several days. His body is already shrivelled and desiccated from the desert heat. Strangely, no scavengers appear to have been at him. His broken axe and shield are found discarded nearby. A pattern of stones has been arranged on the ground before the stake. "I fear this whole place," says Lachaidiga, "has been used as an altar of chaos!"

Finding the oasis empty of any obvious dangers, they report back to Ni'arouj. She is visibly shaken by Lachiadiga's explanation of the import of the dreadful find. She decides to examine the oasis herself [Survival roll: 43, success]. She is not there for a minute before she has discovered that the water of the oasis seems tainted. She orders the caravan to make camp well away from the corrupted place. A small party of volunteers (led by Wihiyaba) go back to retrieve the man's body and give him a proper burial. A double guard is posted that night.

As the caravan is packing up to leave the next morning, the sentries spot a rider in the distance, coming hard towards the oasis. A detachment of armed camel-riders are sent to head them off, with Lachaidiga and Wihiyaba in tow.

They are relieved to find that the rider is a courier wearing the uniform of a soldier in Anzakàr's army rather than some chaos cultist. They warn the woman off from the tainted oasis, and bring her to their camp to see Ni'arouj. 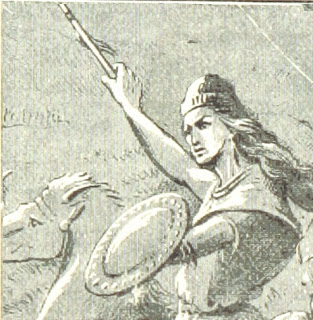 "I must back to Anzakàr at all speed," says the woman. "There has been a disturbing increase in wild broo activity in recent months, and we have intercepted some dispatches -- the chaos-men are forming an army of monsters! We haven't a strong enough body of troops in Peren'osh to withstand them, should their numbers not be exaggerated. We need the City to send more soldiers for defence."

Ni'arouj is concerned enough by the courier's report that she freely allows the woman to water her horse using the caravan's supplies.

Wihiyaba tells the courier that he is travelling with the caravan to ensure its safety, and asks if she would convey a personal, though not private, message back to to Anzakàr as well. She assents, and he dashes off a missive to Lachaidiga's brother on a scrap of old leather.

"To Nid-dallum say, thus sayeth Wihiyaba: I am well! Greetings to you. I am travelling to Peren'osh and then on to Hasharu with a trade caravan, to protect them from the increased dangers in the area. I will check in with the garrisons in those cities. Tell my unit commander of my movements, and tell your good brother Enzzal that I have nothing that I may report to him."


The caravan continues ever on its way through the wastes. After leaving the poisoned oasis, the route goes a few more leagues through the hills, and then out into sandy dunes. The camels are starting to feel the effects of their missed watering-hole, making progress difficult. 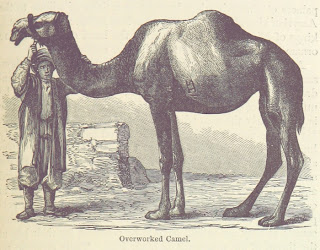 [The first random encounter roll came up a 0, Wilderness Event. I drew the above picture from the folder. Some of the camels are really suffering from the missed oasis. This will result in a one-step penalty to Ni'arouj's Navigation rolls. Traversing hills already puts the difficulty at Hard, so the additional step pushes the day's roll up to Formidable (skill at 1/2; so, 40%). Luckily she rolls a 38, so they stay on course.

The second random encounter roll this day came up an 8, Ruins & Places. Random picture below...] 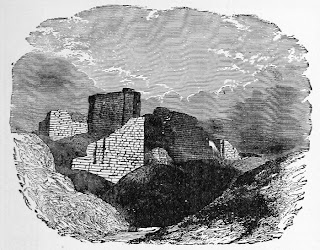 Some toppled stonework is seen in the distance. Large sandstone columns still rise into the sky, and a main building and partial wall is still visible between two gate towers. A murmur goes through the caravan, and many are the fingers that point towards the structure.

"Ruins in the desert like this," says Ni'arouj to a certain inquisitive sorceress, "generally mean bandits. Or broo. Or worse. I do not propose to deliver my goods straight to their door!"

"But mistress," says one of her lieutenants, "there could be a well. There is a great rumour passing through the ranks. They are anxious to know, and I fear they may contest your leadership if you order us to pass by this potential source of water."

"Very well," sighs Ni'arouj, "we shall stop here. Now, who shall I send to investigate?" 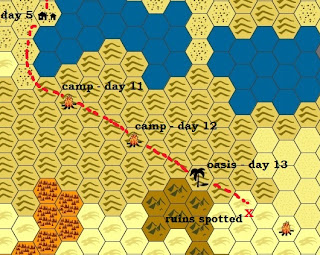