I've been happily using B/X and Labyrinth Lord monsters in my Lamentations of the Flame Princess games, but the treasure tables have presented me with a bit of a crisis. Not only is there the switch from a gold- to a silver-based economy, but also the relative values of some of the coins have changed. I started by just dividing the GP found by 50 and EP by 25, but the average treasure values (Moldvay p. B45, Rules Cyclopedia p. 226) were really skewed doing it this way. Simply demoting the SP to CP and GP to SP was a similarly inelegant solution. If it were just wealth for wealth's sake it wouldn't be much of an issue, but as I am using the SP for XP rules as written I wanted the average values to match those of their B/X counterparts. So here is my proposed solution.

The tables I used as reference were from my original Moldvay Basic set and the Rules Cyclopedia (the Special Items column). My changes only affect the coins. Gems,  jewellery, and Special Items are fine as is, since converting their values is trivial. I've also left the magic items column alone, though for LotFP you will probably want to lower the chance of magical treasure appearing or ignore this column altogether.

The individual Treasure Types (TT P-V, HC I-VI) can remain as is, or nearly so. The absolute values will be higher in most cases (especially the last pair) but as coins looted from intelligent creatures do not yield XP (LotFP Rules and Magic, p. 33), this isn't much of a problem. You could always roll smaller dice for GP and EP. The other individual treasures are fine, but you may wish to downgrade the Treasure Types held by individual monsters (e.g. give goblins P or Q instead of R).

The Lair tables have been totally redone. I've reorganised the columns so that the XP values remain the same for each type as they did in B/X. Thus the GP column changes directly to SP, and the SP column becomes CP. EP becomes GP (quantity adjusted for value) and PP becomes GP (also adjusted by value). So now we have 1000s of SP & CP, 200s of EP, and mere 10s of GP. This left the original CP table hanging. Rather than making a table for ha'pennies or the like, I changed CP into a new category called bulky items. A bulky item can be assumed to be worth 10SP (2d10SP if you prefer), and count as an Oversized Item for purposes of Encumbrance. Example bulky items would be an iron fireplace grate, large copper cooking pots, a nice (if plain) wooden chair, etc. These are all things whose value will often be enough that desperate low-level characters (or greedy high level ones with a waggon) will consider taking them on their way out of the dungeon... just like enormous piles of copper in B/X.

I did away with Platinum coins altogether as (according to a quick web search) they weren't minted until the 1700s, which falls outside the standard early-modern period of the game. Electrum coins, on the other hand, were made in the 7th Century BC in Lydia from a naturally occurring mixture of gold and silver. For gaming purposes the EP table will represent one of two kinds of coin: either ancient electrum coins or more recent gold coins which have been in some way debased. But this is a purely a matter of flavour.

To make it easier to use, I've done the full tables in both Labyrinth Lord and BX versions so you don't have to worry about which TT maps to which HC.

I had intended to upload this as a PDF to  dropbox, but I am having broadband issues. So here are .JPGs of the tables instead. Edit: the PDF is here now. 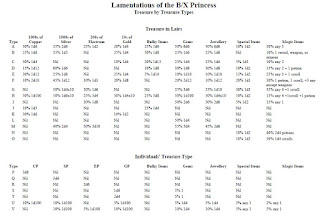 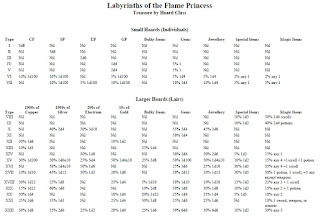 Finally, here are the TT:HC equivalencies, to save you the trouble of looking them up: