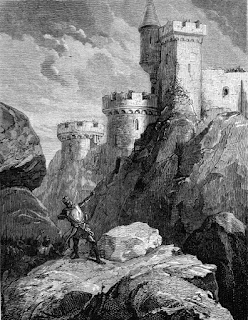 Having made my character, I then threw together a sandbox. It probably took longer to decide where to put it than it did to actually make the thing. This is the reason I rarely play in established or historical settings; I spend too much time on research. I don't even have that much source material beyond the basic books for 4th & 5th ed., but http://www.wiki-aventurica.de/ fills in a lot of gaps.

I knew I wanted mountains on one side, and forests & hills, and nothing too close to major civilised areas. Long story short... I placed it in roughly the middle of the continent of Aventurien (Aventuria) -- it's the red blob near the centre of the map (from the DSA Kartenpaket), about 250 Meilen (the aventurian Meile (mile, league) = 1 kilometre) from the capital. 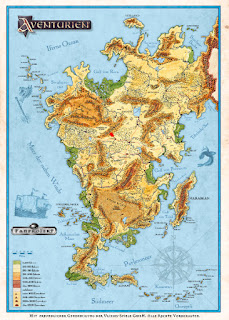 The screen-sized sliver of my Dragon Warriors sandbox turned out to be really useful for playing, so I wanted to have the same sort of area. My screen made a 15x37 hex map the ideal size, so a scale of 2 Meilen per hex seemed workable. I zoomed into the area map until it was at the same scale relative to my screen, and messed about trying to find the area I wanted as a base. I couldn't quite find an area that worked, so I hit on the idea of rotating the map by 60° (i.e. one hex side).

I blew up the rotated bit of the map I needed to 575%, and used the Import Map to Trace feature in hexographer to make it into a hex map. It was a bit indistinct, so I kept the original to hand whilst I was tracing. With just terrain, a river, a minor road, and three settlements, the map was pretty empty at this point. I figured there should be some villages and farmland, and canonically there is a martial academy near Greifenberg, but to filling in the bulk of the map would require going back to the PC.

Based on her history, skills, and abilities, I knew the following things needed to exist:

Witches - she'll need to learn new spells and curses from them, and can only make more flying ointment together with them at the grand rite. The witches will probably want something from her before they let her into their circle.

Mage - witches can learn guild mage spells (though they will never master them). The mage will certainly want something in return. Also, I am constitutionally incapable of making a sandbox without a wizard's tower.

Ingredients - for alchemy & herbalism. She can't get them down the shops.

House - She'll need to live somewhere. And wherever it ends up being, she'll need room for her witch's kitchen / alchemy lab. But will she find one, have one constructed, move into town...?


With all that in mind, I started placing things around the map. For the ease of random determination, there will be 30 location icons on the map. But, to start, I'm only placing 20. These are the ones that are generally known to exist. The other 10 will be randomly generated as the game progresses. So, here is map, followed by the basic key to the numbered locations:

1. Gut Nebelstein
I can find no information on this, other than that it is a settlement in the Finsterkamm. It's out of the way enough that I will leave it a mystery for now.

2. Ruins
Details of caves and ruins will be determined as the adventure leads them there.

3. Hexengipfel (witch's peak)
The witches congregate here for the annual rite. They may or may not come here at other times on various witchy errands.

4. Shrine to Efferd (the water god)
The source of the river is sacred, and the shrine here is attended by a handful of priests.

5. Winterfels
A village along the road, boasting a good travellers inn. The population of almost 200 mostly raise goats and sheep. Cheese-making is a big industry.

6. Herberge zum ruhigen Aufenthalt (Inn of the quiet stay)
A travellers' inn in a forest clearing off the road. Poor-quality stables, as horses can make the journey from Hohendorf to Winterfels in one day. It is rumoured that a gang of bandits either work out of the inn, or else meet here to form their nefarious designs.

7. Hohendorf
A crappy little village in the hills, population ~80. Forestry is the major industry, and a few villagers raise sheep and cows in the communal pasture. There is a good travellers' inn, and a small Praios temple. Our heroine's home town.

8. Mage's Tower
The peasantry are suitably terrified of the tower, and will never go near. The Mage is never seen, but sends servants abroad for supplies.

9. cave in the hills
Rumoured to be part of a cave complex that goes very deep. Perhaps even connects with cave #10.

10. cave in the mountains

11. Birkenhain
There are only 150 full-time residents of this village, but another 200 loggers call it home when they are not in their forest camps. The mage's servants are often here on minor supply runs, and the mage not infrequently lets the loggers work near his tower in exchange for firewood. Rumours that the mage has a lover in the village are wholly unsubstantiated.

13. Weihenhorst
Weihenhorst is a walled town that played an important strategic role in the orc war (1012BF - 28 years ago). There's at least 800 people living within the walls, and half again that many without. A few dwarfs and goblins call Weihenhorst home.

14. Raven Cloister
A monastery dedicated to Boron, the god of death and sleep (one of the Twelve Gods), who is usually depicted as a raven. There is a grand cemetery (Boronanger, lit. Boron's meadow) and extensive crypts. Despite its ominous and terrifying aspect, this is probably the safest place on the map. Boron's servants are arch-foes of the undead.

15. Almweide
A village of shepherds and subsistence farmers. Population ~150.

16. Cadet Academy
The officers' academy for soldiers of the March. Cadets are trained in bastard- and longsword, mace, and flail, and instilled with the values of Knighthood. On days of rest, the cadets are forbidden to go carousing in Weihenhorst; however...

17. Kalmansfeld
A large farming community. Only about 50 of the population of 700 live in the town centre, which is used as a trading post and farmers' market.

18. fairy glade
Scarcely one mortal in any given century visits the glen and returns, and even then they are never the same again. The mage or a powerful witch may know how to treat with the fairies. An elf might also be a trusty guide, but there are none locally. Just imagine the wond'rous plants growing here, and the magical properties they posses.

20. Greifenberg
Greifenberg is the seat of the Baron of Greifenberg. The baron's castle is on a solitary hill in the midst of a large town, boasting nearly 1000 inhabitants. Greifenberg was plundered by ork hordes in 1012BF. The road heading NW out of town is little better than a dirt track, whereas the SE road (off the map) leading to Greifenfurt (capital of the Markgraviate of which the barony is a part) is properly stone-faced and well-tended; this mirrors the attitude of the inhabitants of Greifenberg towards all those living closer to the Finsterkamm then they (save, of course, the cadets and the mage).


The sandbox is situated in the Barony of Greifenberg, which is in the Margraviate of Greifenfurt, in the so-called Shield Lands of the Middenrealm.

The mountains on the left side of the map belong to the Finsterkamm (Gloomy Peaks). They are home to gryphons, orks, and secretive clans of dwarfs.

The river is the Breite (meaning Wide), one of the headwaters of the Große Fluss (Great River). The Breite is only navigable as far as Greifenfurt (not on the sandbox map). 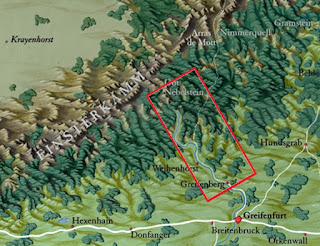 There may be occasional missions off the map. Above shows the sandbox situated in the surrounding lands (again, from the Kartenpaket). Greifenfurt is a city of 3800 inhabitants, and residence of the Marquise. Krayenhorst is a monster-infested ruined city in the midst of the Messergras Steppe. Arras de Mott is a mountaintop monastery devoted to Praios, which boasts a great library (forbidden to outsiders).

For getting round the map, I'm using movement points. According to the DSA rulebook, a human can travel 30 Meilen per day, and a horse 50. I'm translating those figures directly into movement points. Since one hex = 2 Meilen, a clear terrain hex costs 2MP. Grassy and barren hills take 3MP, forest takes 4MP, forested hills 5MP, and all mountains take 10MP, whether high, steep, and barren or lower and wooded. The snow-capped peaks will affect temperature, but not movement. The road is of low quality, and does not affect movement rates; it just obviates the need for skill checks not to get lost. 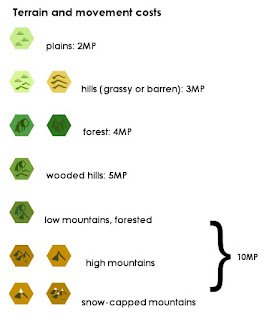 Each settlement, plus the Mage's tower and the witches, counts as a faction, and some are even subdivided. Their relationships are expressed in terms of modifiers to Social skill rolls made by a resident/representative of one towards the other. Negative numbers marked with an * indicate the relationship is based on fear, and should be converted to a positive modifier for intimidation checks. Intimidation checks for positive relationships only take effect when it makes sense (e.g. nobles intimidating peasants). I started making a table, but there were too many Neutral (+0) entries, so perhaps a summation is more in order. Individuals may, of course, vary, and the PC's reputation will be taken into account if/when her actions affect her standing towards any given community.

Merchants: stand outside the normal order of things, and count as Neutral (no modifiers) when conducting business.

Gut Nebelstein: this settlement is so far removed, that no modifers apply, unless you're a witch or mage.

Peasants: The populations of Winterfels, Hohendorf, Birkenhain, Almweide, and Kalmansfeld all have a very parochial outlook, giving them a -1 towards one another. And as they are all rustics, they have a -3 towards everyone in Weihenhorst, Greifenberg, and the Academy.

Nobles & Knights: +3 towards peasants, but only +1 against the populace of Weihenhorst.

Witches: almost everyone hates and fears the witches, so they have a -3* towards almost everyone; a suspected witch only has a -1*. The Mage respects them enough, so the penalty toward him and his servants is only -1.

Mage's Tower: almost everyone respects and fears the Mage. He has a +2 when dealing with others, except in Birkenhain where he has a +3. He prefers to be left alone, so everyone else has a -2 when dealing with him (again save Birkenhain, who have a +1). The mage's servants speak in his name, and enjoy his modifiers.

Priests at the Shrine of Efferd: +1 (mutual) for other priests of The 12 Gods, +3 (also mutual) for actual pilgrims, otherwise no modifiers.

Herberge: peasants have a -1 here, witches and the mage count as normal, all others are Neutral. The staff count as peasants if they should ever leave the inn.

Rabenkloster: uniformly neutral, as all must come into Boron's realm in the end.

Kadettenakademie: the instructors are all Knights, and many of them nobles as well (modifiers as above). The cadets are afforded less respect (+1) by the peasantry, and are positively hated in Weihenhorst for the trouble they cause there (-3, except in certain louche establishments who cater to their vices).

Weihenhorst: The people of Weihenhorst who live inside the walls look down on the provincials who surround them. Assume a -2 to deal with them, unless a worse penalty is specifically indicated. Outside the walls everyone is a Peasant, so those modifiers apply.

Greifenberg: everyone here is either a noble or peasant. The baron (only) gets a +4 almost everywhere (+3 in Weienhorst, +2 with the mage and witches). 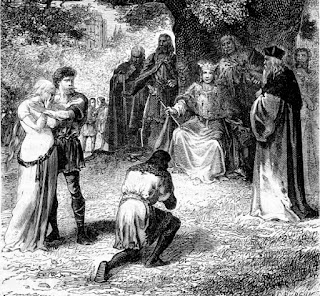 Next post, the adventure begins...
Posted by Alea iactanda est at 15:55