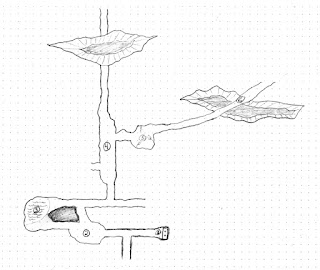 The passage out of the chamber loops back and branches. Proceeding down the left hand path brings the party into a long, narrow chamber [Room 4]. They see torches at the far end of the room. A group of 6 rough-looking warriors in cuirbouilli armour bearing axes and shields is coming towards them.

The band of warriors look tense, but do not seem overtly hostile. The leader cautiously calls out a greeting. But Grûm sees the large, leaden symbol hanging round the priest's neck, and recognises it as a symbol of evil. "He wears the Mark of Krazhexth-Khaa!" shouts Grûm. "We must put a stop to their deviltry!"

[Round 1]
Both sides are a bit taken aback by the dwarf's outburst, but they both know that violence is necessary outcome. Nadilla recovers first from the shock, and murmurs a soft incantation, calling upon Sister Night to enfold the brigands in her Dreamy Embrace. Three of the warriors sink to the floor in deep slumber.

[She cast Sleep, which affects 1d6 HD worth of humanoid opponents per caster level. Those affected are allowed a saving throw to shake it off, but all three of the brigands fail theirs.

Nadilla has three (1+2 for INT) spells prepared for the adventure, and can cast three spells per day in any combination, so she has two left.]

The evil Priest intones a vile prayer to the wicked demon lord he serves, to aid him in his fight against these servants of Law [He casts Aid, giving him +1 to AC and saving throws].

The remaining two warriors attack Kurg and Délia, as the front ranks close upon one another.

Kurg swings his mighty sword in an even mightier arc as the brigand raises her axe to strike. Her head is severed neatly from her trunk and sails off into the darkness beyond the torchlight [He rolled 11 vs. 8; 5 damage dropped her to -3hp].

Neither Délia nor her foe can best the other. Their axes smash together and spark [6 vs. 9; no hits].

[Morale phase: As the brigands have lost half their number, they need to make a morale check: 2d6 + the level of the strongest creature in the party. 7+ is required to stand; The brigands roll 8+1, a success.]

Despite their losses to mettle and magic, the brigands fight on.

[Round 2]
The priest steps over the headless corpse of his comrade [movement phase], and raises his own axe to strike. He brings it down upon the rim of the barbarian's shield with hellish fury. The blow is so fearsome that it snaps the iron band in twain and splinters the wood, sending fragments flying, leaving Kurg with little more than a leather strap.

[Kurg and the priest roll 5 vs. 12; 1d6=6 damage. This would kill Kurg, bringing him to -3hp, but PCs (and, optionally, important NPCs) have an option to cheat death in combat by sacrificing their shield or weapon to avoid the fatal blow. He chooses to lose his shield; for, though he remains to fight rather than flee this encounter, he is of the same opinion regarding shields as Archilochus: 'ἐξαῦτις κτήσομαι οὐ κακίω' (I will get a new one, and no worse).]

The brigand and Délia square off again. Her swing is a hair's breadth too far away to connect, and she tries to fend off his counterattack with her shield. His axe strikes right next to the boss, and half the wooden shield is broken away with a crunch. It hangs at an angle from the rest of the shield, as it is still nailed to the outer covering of hide. Délia is left with an unbalanced and useless wreck, which she casts aside in frustration.

[She and the brigand both rolled a 9. When both rolls are the same, each combatant rolls their damage and compares the results. Whoever rolls lower has their weapon or shield broken (their choice).]

[Round 3]
Kurg lets out a mighty war cry, and buries his sword in the evil priest's head. The priest dies with a curse on his lips as foul as the darkness in his heart [Rolls 14 vs. 9; 3 damage dropped the priest to -1hp].

Délia and the brigand are locked in single combat, and neither notice what is going on around them. The feint at each other a few times, but with no result.

[Rolls 3 vs. 6, no hits. The brigand needed to make another Morale check, this time at -1 for having lost his leader (per the brigand description in the rulebook), but he rolled very high.]

[Round 4]
Though the fanatic fights on, he is no match for the combined might of the two warriors. His lifeblood soon stains their blades, and the cavern floor.

Délia turns round to look at the rest of her companions standing behind her in the torchlight.

"I did my part," says Nadilla.

"We had to guard the rear, sweetie," says the elf, "in case any more of them showed up. Besides, you two put on quite the show. it wouldn't have been right to interfere with such artistry."

Not one for discussions, Lisette has been slitting the throats of the sleepers and going through their purses. She amasses a total of 14 gold coins [they had 1d6 each], which she is allowed to pocket for now. Kurg and Délia select new shields, Grûm smashes the priest's symbol of Evil with his hammer, and then the party continue with their exploration.

The northern passage extends for a little way, then abruptly ends at the lip of a chasm [Special]. Kurg and Délia are fortunate not to have tumbled into the blackness. The wizards bring the torches forward to see. The bottom of the chasm -- if it indeed has one! -- is too far down for the feeble light to reach, but there is a suggestion that the passage continues across on the other side. Kurg is about to throw a stone down into the chasm to sound out the bottom, but Zarain grabs the barbarian's hand. "You don't want to wake anything that might be down there," cautions the magician sagely. A brief moment of panic plays over the warrior's features, and he gently returns the pebble to the floor.

No one is willing to attempt a crossing of the chasm, so they go back and try the passage leading east. After only a few steps it opens up into a small squarish cave [Room 5 - empty, trap: fire] with stalactites and an uneven floor. The party make their way carefully through it, looking for possible hazards. But so focussed are they on the floor and ceiling that they fail to note the brass nozzles hidden in crevices in the walls. Suddenly three jets of flame roar forth, criss-crossing the room.

Most of the party are out of the line of fire, but the flames wash over Grûm and Zarain, neither of whom is quick enough to dodge out of the way. Zarain is badly burnt (2 damage leaves him with 2hp), and the poor dwarf is charred to a cinder (6 damage puts him at -3hp). He dies instantly.

The rest are saddened by the loss of their comrade, but they must press onwards, lest his sacrifice be in vain. They decide to bring his body back to civilisation when they leave, and press onwards.

The long passageway out of the fire room also leads to another great chasm, but this time it is spanned by a narrow bridge of roughly-hewn rock [Room 6 - chasm with bridge; 50% chance of guardian]. The ceiling of the cavern rises high above the bridge, further up than the torchlight can reveal. The party decide to cross, but must walk in single file.

[surprise die=1
Anyone pushed back in mêlée (attacker's roll = AC) must make a saving throw (dex mods apply) or fall off the bridge. Anyone killed or rendered unconscious falls automatically.]

The party proceed slowly and cautiously across the bridge. Some of them, ever alert for hidden dangers, try to look up and around themselves, but their only recompense is a feeling of vertigo. Watching one's step is the only sensible course of action. A cold breeze wells up from the chasm, the exhalations of the deepest recesses of the earth, if not the very underworld whispered of by the prophets of mad gods and demons.

And then from a hidden recess in the darkness above springs a creature of nightmare, right into the middle of the stunned explorers. It is a humanoid creature whose dark blue skin is shot through with blood-red veins. Its almost featureless face has a single eye, almost totally white, whilst its hair is composed of a mass of tentacles that seem animated with a life of their own. Its hands, situated at the end of long, flexible arms, are at once talons and mouths bristling with thorny teeth.

[The creature is a Darakht (HD 3, Att +1, AC 8, MV 4, AL Chaos). I recognised the description immediately from the cover of one of my wife's John Carter novels, and it's not the only Martian monster in the bestiary; É&S makes a great Sword & Planet rule set.] 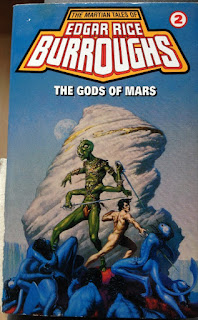 [Surprise round]
The horror lands on the bridge between Lisette and Melek. It swipes at the priest with one of its hideous, toothy paws, but he instinctively imposes his shield. Its other hand darts out to catch Lisette between her shoulders. The awful mouth bites deep, and pulls back with a bloody morsel of her flesh clamped between terrible fangs. She cries out, then tumbles over the side of the bridge, and is swallowed up by the darkness.

[Monsters (and Fighters) of level 2+ can attack multiple opponents whose total levels do not exceed theirs. A monster's level is equal to its hit dice if no other mention is made. The darakht could thus attack up to 3 PCs, were there room.

[round 1]
Zarain is next in line after Lisette. He does not advance, but calls upon the Ineffable Powers of Yuskiz-Vog; he is enveloped by a shimmering field of energy to protect him from the nightmare-beast [he cast Shield, which gives him AC10 -- but only for 1 round (per level; I should have read the description more carefully)].

Melek leads with his shield, and swings his heavy mace up from underneath, smashing the beast in its impassive face [9 vs. 8, 4 damage leaves it with 6 hp].

[Round 2]
The coward Zarain will not advance! Nadilla sighs and edges past him [she can move but not quite get into mêlée range]. Blue sparks once again begin to play over her hand.

The creature slams both its arms against Melek's shield. The priest staggers, losing his footing as the thing's bulk presses him back. He stops just in time, as he feels his foot come down on the lip of the bridge. [5 vs. 9 (=Melek's AC): he is pushed back. Luckily he rolls 10+0 on his saving throw, so doesn't fall off the bridge. He'll still suffer the normal penalties next round.]

[Round 3]
Melek steps back towards the centre of the narrow bridge, and plants his feet firmly. The creature takes another few swipes at him, but cannot get past his shield [6-1 vs. 7+1; Melek's AC is 9, so both miss].

Nadilla steps swiftly forward and discharges a blast of magical energy at the monster. It tenses as the blast erupts into its back, then drops over the edge and falls writhing into the abyss [10 vs. 9; 1d6+2=7 damage, killing it].

Disheartened by the loss of yet another of their band, the party continue their cautious way across the bridge. Fortunately, no more monsters leap out to attack them.
Posted by Alea iactanda est at 10:15