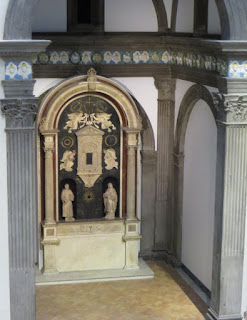 scene 30
setup: Altered (was: go to chapel to retrieve relic)

The chapel is large and bright and airy. The Light God in his much less stern aspect seems to hold sway here -- or had until recently. From the overhanging balcony, the three searchers discern that the chapel has become a scene of horror. Blood is spattered everywhere, and [1d6=] three gory bodies are strewn about the altar.

"We should be careful," says Gerdie. "We don't know if whoever did this is still around."

"Or whatever did this," adds Iexelcis.

"And we don't even know," says Lycinia, "if those bodies are quite dead."

The three descend to the chapel floor, and approach the altar with trepidation. Lycinia and Gerdie walk with bared steel, Iexelcis' fingers are already forming the first stage of a magical gesture. The stench of the bodies is overwhelming. They seem to exude some oily fluid underneath all the blood, and their flesh is discoloured and tumescent. Gerdie prods the nearest one with her sword. It doesn't react, so she prods it harder, breaking the skin and causing a vile, black fluid to ooze out.

But they're not quite dead; moments later they spring to their feet with supernatural quickness, and attack.

[round 1]
Lycinia wrinkles her nose at the foul odour of the animated corpses, but hardens herself against the impulse to retch [makes her saving throw]. She swings at the nearest of the unnatural creatures, but just barely connects with the tip of her sword [2 damage drops it to 9hp]. A pair of putrid hands grab Gerdie [3 damage puts her at 17hp], but Iexelcis is just too far out of the third thing's reach [it missed].

[round 2]
Lycinia manages a more solid hit on her attacker [7 damage drops it to 2hp]. Gerdie feels like she may swoon [failed her save] but still delivers an impressive blow with her sword [7 damage leaves her attacker with 1hp]. Iexelcis bears up under the noxious fumes [saves] and chants syllables of power; the air about him shimmers for a moment as the protective charm [Shield] settle over him. The three awful corpses are a blur of clutching claws, but none of them are able to find a chink in their quarry's armour [all 3 miss].

[round 3]
Gerdie brings her sword down heavily on her opponent. The blade slices cleanly through its neck and down into its shoulder, removing both head and arm in a single mighty blow [8 damage drops it to -7hp]. It falls to the floor with a wet thud and is still. Iexelcis draws his rapier and joins the fray, but neither he nor Lycinia are able to land a hit on their swiftly-moving foes. Nor, at least, do the undead manage a riposte.

[round 4]
Lycinia's enchanted blade finally finishes off the thing coming at her [2 damage puts it at 0hp]. Iexelcis, perhaps overconfident in the protection of his sorcery, lets his enemy slip past his guard. Bony claws shimmer as they pass through the magical barrier to grab his neck and tear [6 damage, -1 (for the shield), puts him at 0hp]. He passes out from shock, blood dripping from the wound that fortunately did not open his jugular.

[rounds 5-12]
The last of the undead proves to be a much cannier foe than the others. Its claws find no purchase on the heavy armour of its opponents, but every time they try to fend it off with their swords, the thing has already leaped out of the way. And when they do land a hit, the wounds are never deep. In the end, it is no match for the seasoned warriors, and Gerdie's steel finally ends its unnatural existence.

[The end of this fight was pretty rubbish. In rounds 5, 7, 8, and 9 there were no hits scored at all. Gerdie took a single additional point of damage, Lycinia remained unscathed. 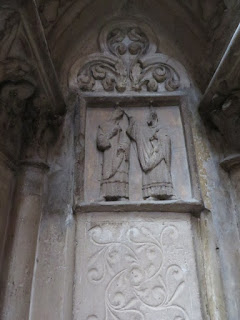 Lycinia examines Iexelcis, and is elated to find he yet lives. Gerdie takes the blood-spattered altar cloth off the altar, and uses one of the clean bits to make a bandage for the fallen wizard.

"Could you get the relic," asks Lycinia. "I don't think I should risk touching it. I'm not even sure I should get too close to the altar."

"Perhaps," replies the elf, "but it makes me nervous, all the same. And someone's got to watch our injured friend here."

"Have it your way, girl," says Gerdie as she tromps back behind the altar, "but if ye hear me start to yell, ye best come runnin'."

Gerdie lights a torch and goes behind the altar. In the apse is a trap door to a seldom-used crypt; it has been filled in times long past with the bones of Manfred and Margiste's distant ancestors, and predates the larger family mausoleum under the outer chapel. At the end of the cramped row of tombs is a small shrine containing the relic, part of the thighbone of St. Lisaveta, the Guardian of the Meek. Gerdie opens the dusty glass door of the golden shrine and reaches for the bone. Her fingers stop short for a moment as she is paralysed with fear; maybe the elf is right about not wanting to handle such an item. She looks to the ceiling and whispers, "Light God, Lord of Everythin', you know we really need your help right now. Please don't strike me dead for touchin' the relic." Then, holding her breath, she takes the bone from its seat of velvet and gold. And feels nothing. "This thing had better be genuine," she mumbles. 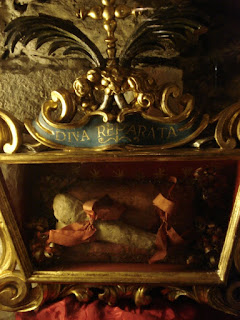 Gerdie comes back up the stairs, gingerly holding the fragment of bone in her hand. She sees Lycinia sitting on the floor next to the unconscious Iexelcis, reading a parchment. "Oooh, whatcha' readin'?" says Gerdie. "Wait, don't tell me the end -- you'll spoil it."

"It's those arcane fragments we found behind the panel in the hall. The work of a madman, to be sure. But not, I think, one of the ones we're dealing with... It's getting so dark outside. I think we'll need that torch of yours to get back."

Lycinia folds the parchment and puts it into her belt pouch. She carefully lifts the injured magician, and she and Gerdie make their way back through the dark corridors.

[Meanwhile, back in the great hall...]

"Oh, you're burning up!" exclaims Margiste, feeling the old woman's forehead. "Perhaps you've been sitting too close to the fire." She walks the old woman over to one of the more comfortable chairs, and helps her to sit down.

A rapid change comes over the governess, even as Lady Margiste looks helplessly on. Her flesh starts to droop, and then rot. Her eyes shrivel, her right hand drops off, leaving Lady Margiste holding it. All her flesh begins to ooze away into a mass of corruption.

Margiste is too frightened to scream, but one of the maids notices what is happening, and alerts everyone with her cries of horror.

Manfred pulls his sister away, and begins barking orders at the rest. The chair is doused with lamp oil and set alight, lest the corruption spread, or worse, animate the body. Frère Ambrosius says a prayer as the flames rise, hoping to speed the poor woman's soul on its way.

The flames soon die out, but the room is filled with the ungodly stench of decay and burnt flesh. Emmeline has been staring out the window into the unnatural noonday darkness. Suddenly, she picks up the sword Lycinia had given her, smashes out the glass, and begins calling outside, "We're here! We're all here in the great hall!"

Manfred springs into action. He forcibly restrains Emmeline, trying all the while not to injure her. Before he can hold her still both he and Durcet have received a nasty cut from her blade.

Lycinia and Gerdie return to find the great hall in commotion. A charred skeleton sits in the scorched remains of one of the upholstered chairs, and Emmeline is tied to another chair nearby, weeping and pleading to be let go, and repeating over and over that she doesn't know what she did wrong. Two of the maids are hastily trying to board over a broken window. Lady Margiste is weeping uncontrollably, ignoring the confessor's attempts at consolation. Manfred is pacing angrily, but when he sees the unconscious Iexelcis, he stops short and turns very pale.

"No!" says Manfred, "He's used his miraculous powers for the day. By all the lords of the Abyss! why did I let him waste it on me? If I'd known..."

Manfred takes the unconscious wizard from Lycinia's arms, and takes him over to one of the couches by the fire. He puts him carefully down, then kneels beside him, smoothing his brow and whispering soft words.

Meanwhile Gerdie has presented the relic to the confessor, who takes it from her reverently, a look of religious ecstasy washing over his features.

Then the cook turns abruptly away form the window, and whistles to get everyone's attention. "There's torches outside in the courtyard. I think whoever the crazy girl was shouting at is come for a visit." 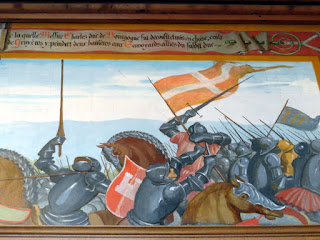