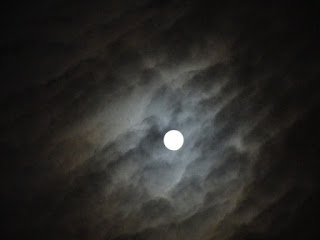 The storm once again seems to worsen. It is rapidly becoming impossible to distinguish night from day. They are in danger of getting snowed in.

Q: Can they rest all day? Unlikely: 06, Exceptional Yes. Everyone heals a bit: 1d3 if over half HP, else 1hp recovered.]

As the only uninjured member of the party, the cook sneaks away into the house to get what food she can find (protected by Lycinia's invisibility spell). She manages to find provisions for [1d4-1=] 2 days; everything else is spoilt.

[Q: What are the cultists doing? Imprison / Animals
The remaining (2d6=) 8 cultists are sealing up the church to starve the PCs out.]

Some strange banging is heard outside the church. One of the stained glass windows goes dark. More banging follows. Manfred, who was on watch, runs to the window to look as everyone else groggily wakes up. "By the molten streams of Gehenna," he curses, "someone's put boards over the windows. They-- they're trying to seal us in!"

"Why would they do that?" asks the cook.

"Maybe they wanna starve us out," says Gerdie.

"Or burn the church with us inside!" gasps Lady Margiste.

"Everyone go back to sleep," says Lycinia. "If someone smells smoke, then we can leave, but otherwise let them waste their effort. I can get us out through the stone wall when we need to go. Good night."

Despite the strange noises outside, and the constant hammering, they manage to rest whole night and the next day. Frère Ambrosius uses his healing spells on Gerdie, Manfred, and Orst. Lycinia prepares spells as before. They decide to leave at night, or at least, what they believe to be nighttime.

They could be in worse shape... 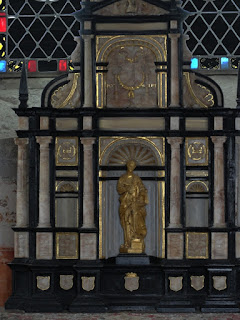 scene 40
setup: Altered (was: sneak out at night & head to Brightpool)
Altered: detected sneaking out

That evening, they finish the last of the foodstuffs, then everyone packs up their gear and gets ready to move. They are hopeful that they will be able to escape in the darkness, but their crossbows are loaded and held at the ready.

Frère Ambrosius is put in charge of selecting the thinnest point in the back wall. He remarks that, far from being desecration of this sacred edifice, it truly shews the Wisdom and Loving Mercy of the Light God that they have been 'imprisoned' in a place from which they may so easily escape; but no one is listening. They are more interested in Lycinia, as she opens the scroll case and removes the roll of parchment. She thinks back to Théscine pressing it into her hand as she left her fair and far-off homeland... but best not to think on such things now, lest her voice choke with emotion and spoil the magic.

As Lycinia reads out the words of power, the calligraphic letters on the old parchment twist and shimmer, each syllable disappearing into a fine wisp of black smoke which curls around the young elf's fingers. She gestures towards the wall, and the stone peels back with a soft, grating sound to form a rude doorway. Powdery snow crumbles in through the opening, accompanied by a sudden blast of cold and the scent of corruption on the air.

Lycinia rolls puts the scroll away and leads her companions quietly outside. The sky overhead is black with roiling clouds, but the courtyard is well illuminated by a blazing bonfire. Manfred notes with consternation that the cultists seem to have used timber from the collapsed great hall and the castle's furnishings as fuel. The party waste no time, but make their way towards the gatehouse. None dare to look upon the writhing horror growing out of the broken tower; but the barest glimpse of its awfulness confirms their fears that it has grown.

[As the Altered scene indicates, however, they will be noticed. cultists have built huge fire illuminating courtyard. For each of the 8 cultists, I rolled 1d6: 1-4= 0-level fighter, 5= Magic-User of level 1d3, 6 = other human class (Fighter, Specialist, or Cleric) of level 1d3.

1d6=6 of the cultists are initially around; the other two have a 1-in-6 chance per round to arrive.

No surprise; Initiative: PCs 6, cultists 5
Movement is halved due to the snow.]

Manfred keeps looking over his shoulder at the pyre, inwardly seething that they should treat the castle -- his castle -- so. He sees a few cultists around it. And fortunately, he sees that they have become aware of the escape, and warns his friends that they are heading this way. And he is pleased that they won't be leaving without a fight.

[round 2]
Everyone continues to advance [each side moves 20'; encounter range drops to 40'], except for the warlock, who begins to weave his black magic. As the warlock gestures violently with his staff, [1-2 L, 3-4 M, 5-6 G; 5=] Manfred feels a slight tug on his eyes as the wicked sorcery tries to rob him of his sight, but the rage welling inside him overpowers the subtle evil, and he shrugs it off with barely a grimace [saved with an 18].

[round 3]
Lycinia shouts her own spell back defiantly. A deep slumber takes hold of the huntress, peasant, and one of the bandits (2d8=3HD; the f0s affected], and they sink down into the snow. The warlock is turning to flee, but Manfred looses a bolt at him. It hits him beneath his shoulder blade, and he topples into the snow [3 damage drops him to 0hp]. The witch and the pistol-wielding bandit see a volley of crossbow bolts heading their way, but stand firm. One bolt grazes the bandit's arm, and a second her leg [3 total damage puts her at 12hp]; her only reaction is to aim her pistols and sneer, "Is that the best you can do?" [Gerdie and Orst hit; Lady M, the cook, and Durcet missed; there weren't even any range penalties!] Meanwhile the witch has been whispering a string of soft and cooing words, causing eyes to become heavy and limbs to droop [sleep, affecting 2d8=14HD -- everyone but Manfred (1HD too many) and Lycinia (immune)].

[round 4 - 6= the other two cultists show up this round]
Manfred and Lycinia find themselves standing alone as their companions sink into a deep sleep, some of them twitch now and then from untold nightmares brought on by the witch's fiendish sorcery. They look at each other for a moment, and then they are charging through the snow, brandishing their swords overhead and screaming out an incoherent battle cry. The bandit fires upon Manfred as he closes the gap, but her ball merely grazes his ear [1 damage puts him at 22hp]. Both Manfred and Lycinia manage to connect, but the snow has prevented them from building proper momentum [charges will not do double damage]. Still, Lycinia brings the witch low with a single deep cut across her brow [6 damage mortally wounds her (-3hp)]. The bandit takes a nasty cut from Manfred's rapier [8 damage drops her to 4hp] but fights on.

The last two cultists, a swordsman and an arquebusière, trot up to the fight. They stop short [20'], raise their weapons, and fire. Neither shot is telling. The swordsman tosses his pistol aside in disgust and readies a second.

[round 5]
Lycinia opens a gushing wound across the bandit's stomach [3 damage leaves her with 1hp]. Manfred does his best to avoid the pistol she yet waves at him. The report of the pistol rings in his ears as the shot clips his side [4 damage drops him to 18hp]. The two soldiers advance cautiously. The swordsman takes a shot [random target for firing into mêlée], but his bravado pays off; the ball hits Lycinia's shoulder, tearing through her mail as if it weren't there [5 damage brings her to 8hp].

[round 6]
The bandit is backing away, reaching for the dagger at her belt. Her guard drops for an instant, and Lycinia smashes her enchanted blade onto the woman's shoulder, nearly severing the arm. She is dead before she hits the ground [6 damage puts her at -5hp]. Manfred turns and runs at the arquebusière, who smacks his rapier away with the but of her gun, and then brings it down on his head, staggering him backwards [5 damage leaves him with 13hp]. The swordsman draws, but cannot get close enough to Manfred as his companion is still swinging her gun wildly through the air [rolled a miss].

[round 7]
Lycina moves to attack the swordsman. There is a flash of steel and silver, then a metallic ring as their swords meet once, then twice. The third time ends in a dull crunch, and then the swordsman is crumpled in the snow [8 damage puts him at -1hp]. Manfred's rapier is again turned aside by the heavy arquebus. And on the second pass the heavy stock crashes against his sternum [4 damage leaves him with 9hp].

[round 8]
Manfred has finally found the rhythm of his opponent. As the heavy wooden stock sails past he lunges, and transfixes the woman on his blade [5 damage drops her to -1hp]. She loses her grip on the gun and it sails off into the air as she collapses.


scene 41
setup: Altered (was: get info out of sleeping prisoners)
Altered: doesn't go so well

Lycinia and Manfred wake up their sleeping friends, and then attend to the three sleeping cultists. The trio are surrounded, and Durcet prods them awake with his poleaxe.

"You!" shouts Manfred, pointing at the huntress. "Tell me what you're doing here. And what the purpose of this madness is. Now!"

"The lady does not wear the necklace?" replies the cultist. "Why not?
Does she not know it was a gift? [UNE: inquisitive-interest-equipment] She should put it on! Then she'll know all. It is the God's gift to her, the furtherance of her house! [mysterious-enigma-rewards]"

"This is nonsense," says Lycinia, "Manfred, cave this fool's skull in and be done with it."

Lycinia shrugs, and then strikes the woman down with her sword.

The death of their compatriot does nothing to weaken the fanatics' resolve. [UNE: insane-fear-last scene]

"You should have stayed in the church," says the peasant, "When you were too weak we were going to break in and get the girl and the necklace. It would have been a quicker death for you. But not her; she must become one with the god! It's not too late girl! It is your destiny! You will be whole!"

Lady Margiste kills the remaining two cultists herself. Emmeline is horrified by the cold-blooded behaviour of the two people she looks up to the most, and flops down on the snowy ground in tears. Lady Margiste slaps her and says something inarticulate and cruel, then stalks of in a huff, mumbling something about making sure the rest are dead. Lycinia tries to assuage Emmeline's tears, telling her a story in elvish about her dear lost Miolla chiding her for such actions in the past. Emmeline finally calms down, but by that point Lycinia is fighting to keep her own tears from welling up. 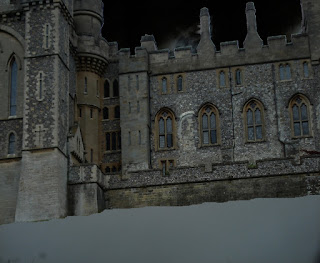