LotFP Solo - Part the Forty-Seventh: "The exhalations and the thirsty winds / Are sick with blood; the dew is foul with death" 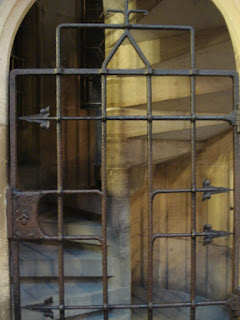 [Q: How is the scene Altered? Overthrow / Prison]

Lycinia lingers in the cell another whole day, anxiously awaiting news of release that doesn't come. Nor is Emmeline allowed back for another visit. She does not even receive a visit from Severin, though he does have another collection of poetry sent with her food.

Lycinia is once again roused by knocking at the door at the top of the stairs. One of the guards goes up to open it, disappearing out of sight in the steep stairwell. Lycinia hears the woman open the door, then say, "what are you doing here?" Then she screams, and topples back down the stairs. The second guard grabs his sword and rushes up the stairs, only to meet the same fate moments later.

The two guards lie dead on the floor of the dungeon, their faces discoloured and swelling, steaming slightly from the acidic bite of the insidious poison. Lycinia tenses, waiting for an assailant to descend, but all is silence. She is just on the point of forming a plan to get herself free when she hears the door creaking open, and footsteps on the stairs.

The confessor and steward descend into the dungeon, and stop short at the sight which greets them. Before Lycinia can even open her mouth to speak, the cleric is pointing his unsteady finger at her.

"You!" shouts Frère Ambrosius, "I knew you were a creature of evil! And to think, Severin had just managed to convince me of your innocence. Wicked! Benighted Spirit! Guards!"

Without even thinking, Lycinia speaks the words of an elven charm, and the two men sink to the floor in dreamless slumber. [Sleep, 2d8=12HD affected; the Confessor is a 3rd level cleric, the steward is 0-level.

Q: Can Lycinia use her belt etc to get key ring without waking the sleepers? Very unlikely: 63, Yes.]

Lycinia tears a long strip from her blanket, and attaches it to her belt. She uses the makeshift grapple to hook the keyring hanging off a peg on the wall opposite her cell. It falls to the ground with a clatter, but the sleepers do not stir. Lycinia is soon free. 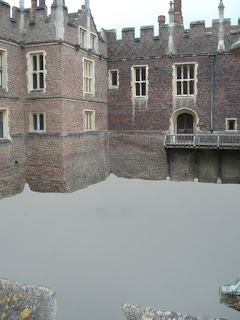 Aroused by the shout for a guard, but unwilling to risk his own life, Durcet, the Marquess' private secretary, runs off to the gatehouse to fetch some of the few remaining soldiers. When he gets there, he is greeted by an awful sight. The soldiers are all dead, having dissolved into festering pools of blackish-green corruption. The master-at-arms' brass nose floats amidst the seething ooze. The smell causes Durcet's eyes to water, and he rushes outside in horror, and is violently sick into the snow.

Meanwhile, Lycinia has taken a sword and heavy crossbow to arm herself. She nudges the steward awake with her boot. He looks up at her groggily.

"Look," he says, "I know you haven't done anything wrong. Ambrosius would have come round eventually. He just needs his bluster. But did you really have to go and put us out like that? Lots of people in the castle look up to the priest, and he's unlikely to forget this... this attack. You've not done yourself any favours."

"Nor have you by locking me up when it's obvious I'm not the enemy. Now wake up the old man and let's get moving. I want everyone to assemble in the hall and we'll discuss this like civilised beings. But until calmer heads prevail, I'm afraid the two of you are hostages."

[Q: Are Severin and Ambrosius frightened into cooperating? 27, Yes.]

"Quite," sighs Severin as he shakes the cleric awake. He goes wide-eyed at the sight of the angry elf looming over him with loaded crossbow, but says nothing. Whether he trembles with rage or fear, it's hard to say.

Lycinia follows the two of them slowly up the stairs and into the castle proper. She is struck by the chill in the air, even inside the great pile.

"We'll find most everyone who's still here in the great hall," offers Severin. "There are too few servants to keep the fires going, and the winter has become unnaturally cold. I'll send one of the maids to fetch the rest." 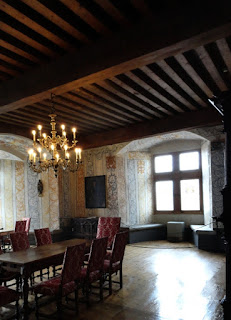 They arrive in the great hall, where a fire roars and comfortable furnishings have been brought in to sit beside the dining table. A small is already group assembled in the warmth. Emmeline and Lady Margiste are sitting by the lady's governess, all working at their embroidery. Three maids are lounging by the blazing hearth. The cook is asleep in an armchair. Gerdie is staring out the window. The secretary is pouring himself a stiff brandy. "The soldiers," he says, "in the gatehouse. Dead. All dead. It was horrible!"

"Well then," says Severin to Lycinia, "it looks like we're all assembled. Other than the Marquess up on his deathbed, locked in with his physician, there's no one else left in the castle."

All eyes dart from the affrighted secretary to the new arrivals, and there is some agitation at the sight of the loaded crossbow held by a peevish elf.

"Oh, come on, girl!" says Gerdie, "I'm sure ye've made yer point. Now let's all make nice and figure out how we're to live through this mess!"

"Fine," says Lycinia, laying the crossbow down on the long table, "I don't really trust any of you right now -- don't look hurt Emmeline, you know I don't mean you -- but if we're all that's left we should probably learn to work together. Now, as I see it, we have a few options..."

Everyone sits round the table (some more readily than others) and possible plans are outlined. In the end, there are four possible options:
1-all flee despite the storm
2-send someone to fetch help
3-ask the Marquess for advice (as it's his domain still)
4-set a trap for the killers

[Lycinia, of course, wants to fight. I rolled a d4 for all the NPCs' choices; the fact that they are all on edge made the completely random opinions seem more justifiable.

No one trusts the others enough to put their fate in one person's hands. The vote is a three-way tie: 4-4-4. The final motion is a great compromise: talk to the Marquess, and let his vote be the deciding factor to stay or fight. But if he is too sick to be moved, then fighting will win by default. The steward, Lycinia, the confessor,and the secretary are to be sent to his chambers. Everyone else will stay put.

[I had decided in advance that the first Ambiguous Event or New NPC result would indicate the arrival of the Earl, Lady Margiste's rogue of an elder brother.]

As the vote is decided, shouting is heard just outside the hall. "What in the Nine Hells is going on here?! Where in the name of black Tartatus is everyone?!"

The doors to the great hall burst open and a trio of men enter, armed with swords and crossbows. All are wrapped in winter travelling clothes, though the glint of chain armour comes from beneath two of their cloaks. Fresh snowflakes are still melting on their heads and shoulders.

"I am home," he thunders throwing back his hood, "but it seems no one else is! Somebody had better have an explanation for all this."

Everyone but Lady Margiste seems cowed by Manfred's wroth. "Please, brother," says she, "do sit down and let me explain what has happened in your absence. And allow me to introduce our guest--"

Lycinia is flustered; as much as she's heard about the infamous brother of Lady Margiste, never has she suspected for even a moment that he's the madman she had met during the blizzard at Cheapington. "I thought he was an Earl..." she whispers to Emmeline.

"He is," replies Emmeline. "The heir apparent in the March of Limenne holds the title of Earl or Countess of Vuldois, and receives the appropriate forms of address for a peer by courtesy therefrom."

Meanwhile Lady Margiste has begun telling the story of the goings on at the castle. All others lapse into silence; even her brother does not interrupt her narration. When she has finished, he sits and thinks it over a while, then suddenly bangs his fist on the table [UNE: inquisitive - scepticism - current scene].

"You're all acting like scared children!" says Manfred. "I'm going to go talk to my father, and then I'll deal with the rest of you!"

Manfred stands up from the table and stalks off without even introducing his companions. Lady Margiste, used to her brother's ways, does her best to make them comfortable, and handles the introductions of everyone herself. Her brothers companions are Orst, a young soldier from Finnsover, and Iexelcis of the Sevenfold Way, an apprentice wizard. Orst has lightly curling golden hair, whilst Iexelcis has the nearly-black skin of a native of far-off Ifrac; both are unquestionably handsome. Lycinia is certain they were in Manfred's band in Cheapington. 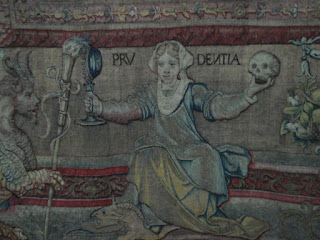 Scene 19
setup: deal with Manfred when he comes back

[The scene hinges on Manfred coming back with his news. I used Mythic et al. to figure out what the news would be. He will reveal the interpretations himself...

Manfred returns after scarcely five minutes. He flings the doors to the hall wide open, then stops to steady himself against the door frame. His complexion has gone green and there is vomit splashed over his boots. "It... I..." he stammers.

His companions rush to his side, and sit him back down at the table. Severin fetches him a cup of brandy. He takes it down in one go, then drinks another long pull directly from the decanter.

"I've never seen anything so horrible," he says, "something has grown out from the centre of the bed, like a sort of immense and gangrenous polyp. God of Light, the smell! It has... limbs... so many limbs, growing out of it and going up the walls. The walls are coated in more of the diseased flesh. Like the... the thing is growing into the room. I... I cannot say any more..."

"What of the physician?" asks Durcet. "Surely he should have--"

"The physician is dead!" shouts Manfred. "His body lies on the floor of the chamber, where even now the... thing is dissolving it. Or absorbing it..."

"Then, your father..." whispers the confessor, too overcome by emotion to finish.

The steward puts his hand on Manfred's shoulder. "That makes you... You're the Marquess Limenne now, my lord." 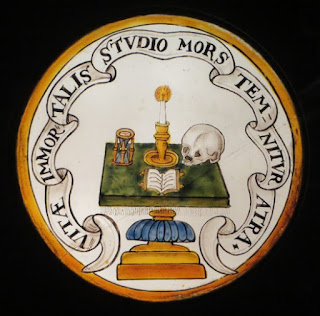