LotFP Solo - Part the Fifty-Second: "And my slain spirit, overwrought with fright" 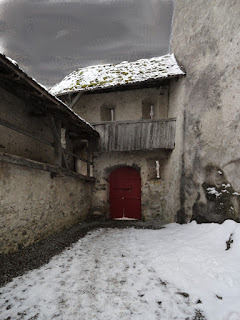 "We've little time until the sleepers outside wake up," says Lycinia.

Manfred leaves the cook to assess the fallen, and heads outside with Lycinia and Gerdie. They find Durcet looking forlornly through the mud for the corpses of their companions. Manfred catches sight of him and shudders, but says nothing.

Lycinia delicately extracts one of the sleepers from the pile without waking the others. She kicks him awake, and he wakes with a start to find himself surrounded by Lady Margiste, Emmeline, Manfred, Gerdie, Lycinia, and their cornucopia of weaponry.

"Talk," says Manfred, prodding him roughly with the end of his rapier. "What is all of this about?"

"We have brought forth the god for the Outer Darkness. The god shall reward his faithful servants, and make us masters of this puny world. Or so we've been told..."

"Who's in charge of all this? Where are you all coming from? Or disappearing to?"

"Our leader is the High Priestess! Only she can commune with the god, when all has been made ready, when the time is upon us. Until then she waits in her lair... a cave in the deep forest."

"What about the necklace? And my sister?"

"She was to to become one of us and then... merge with the god in mystic union. With her great sacrifice, the Father and Daughter would become one! Then our power would... would..."

Manfred runs the man through with his sword. "I've heard enough of this drivel!" he exclaims.

[The Mythic et al. questions which produced the above:
Q: What is cult after? Oppress / The Mundane. how boring, their evil god will grant them temporal power.
Q: Will sleeper divulge location of cult HQ? 50/50: 34, Yes.
Q: Where is it? rolling 1d6 and counting hex sides from the top = south
Q: What did they want with Lady M & the necklace? Attainment / Pain: some mystical shite about controlling the girl to sacrifice herself to the god.]

"The forest is only a couple miles from here, right?" ask Lycinia. "If so, I've got a plan; so we can't kill more than three..."

Manfred nods in agreement. He and Gerdie dispatch two of the other cultists [1d4= the 1st level M-U is the one they leave alive]. Lycinia stands a few feet off, prepared to cast invisibility as the cultist awakens and then follow him back to the cult lair. Everyone else is leaving to hole up in another part of the castle. 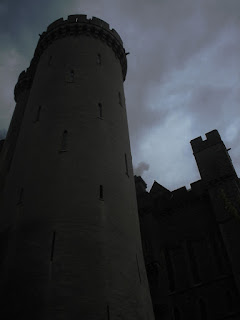 There is a terrifying sound of stone splintering and giving way, as the top of the great western tower bursts outward. The stone walls of old Marquess' bedchamber have been sundered by the thing growing inside, a thing that now protrudes tumescent and writhing from the top of the fractured tower, a gangrenous behemoth of pulsating flesh and writhing cilia-like tentacles. A sound seems to emanate from it, more felt than heard, a low rumbling warble of confused syllables rising and falling in a staccato rhythm.

Everyone stares up at it in horror, unable to think or avert their gaze. Finally, Lady Margiste breaks their silence. "We must to some shelter."

"We cannot go back inside," answers the old priest. "To the servant's chapel. Quickly."

They leave Lycinia standing with the sleeping cultist as they hurry to the small chapel, an old stone outbuilding on the far side of the courtyard.

The strange almost-noise seems to disturb the cultist's sleep. As she stirs, Lycinia hurriedly whispers the words of magic she had prepared, and fades from view. The cultist looks round in shock at the carnage around her, and the spectacle of the unholy thing protruding from the tower. She sees tracks in the snow leading away towards the small chapel, where torchlight flickers -- a sign of life!

She runs to the chapel, and pounds on the door. "Please let me in!" she shrieks. "It's all so horrible! I had no idea what would happen! I'm so sorry for everything! please let me in! You must forgive me!" She continues in this vein for several minutes, and shows no sign of tiring. 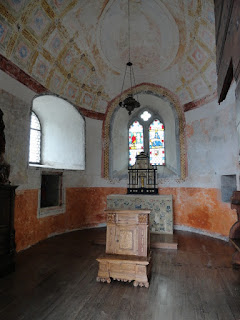 Inside the chapel, Emmeline is holding her hands over her ears to try drowning out the desperate pleas and hammering fists. Manfred is arguing the morality of the situation with the confessor. Gerdie and the cook are trying to decide if building a fire inside will keep them all alive or suffocate them from the smoke. Lady Margiste and Durcet are tending to Orst's injuries; if he lives until morning, he may just survive.

"We cannot sink to the level of animals," says Frère Ambrosius. "The Light God teaches us that Compassion is required even towards a fallen enemy. And I believe your much vaunted code of chivalry says the same."

"Fine," sneers Manfred. "We'll try it your way. Maybe the little wretch can tell us something useful about what in the name of deepest Erebus is going on!"

Frère Ambrosius unbolts the chapel door, and the frightened woman comes in out of the snow. Lycinia lets her spell drop, and follows her inside. She throws a look towards Manfred seeking an answer, but he merely shrugs. Durcet closes the door straightaway, and replaces the bolt.

[Q: Can confessor convince the rest to be forgiving? No Way: 98, Exceptional No.]

The cultist is too scared to speak, and falls to her knees, weeping profusely. "Come, my child," says the old cleric, "if you truly repent of your wickedness, there will eternally be succour for you in the Merciful Emb--"

Suddenly a crossbow bolt is protruding from the woman's chest. She gasps and collapses to the floor, her breathing ragged, barely conscious but alive [5 damage puts her at 0hp]. Everyone turns to find [1d6=] Lady Margiste holding the crossbow. "She'd have done the same to us," says Lady Margiste calmly.

Everyone begins arguing, pointing fingers at each other, and shouting. Lycinia is defending Lady Margiste's action, Frère Ambrosius is condemning it, Manfred is is angry at the both of them for the entire situation. Even Gerdie and the cook get drawn in. Thus it is that no one notices the wounded cultist start to moan and quiver, nor do they see her expire messily as two shadow creatures claw their way out of her head through her eyes. No one sees them, in fact, until they have slithered along the ground behind Gerdie and Lady Margiste, and have raked down the back of each their inky black claws. Lady Margiste cries out in pain, stumbles, and then falls face first onto the hard wooden floor. Gerdie yelps and reaches for her sword.

[Round 1 - PCs win initiative]
The cleric runs back to the altar where he had lain the relic. He seizes it with both hands and begins a most fervent prayer [activating Protection from Evil 10' r.]. Gerdie draws her sword and tries to fight back; her eyes go wide with fear when she sees the blade pass harmlessly through the shadowy demon. Lycinia fares far better. Her enchanted sword strikes true, and the shadow dissipates with an infernal screech [8 damage kills it]. The other shadow takes a swipe at Gerdie, but she is already running for the safety of the relic's holy aura.

[Rounds 2-6]
Lycinia faces the shadow alone. It seems to loom over her in the gloomy interior of the church. Though it can feel the bite of her sword, it does not fear the young elf. The black claws find their way past her armour, ripping holes in her flesh, tugging at her very soul. She feels her strength begin to ebb, siphoned off by the foul touch of the terrible phantom. Her companions watch helplessly. Emmeline gasps every time the claws catch at her friend. Manfred shouts unheeded advice on swordplay. But perhaps his guidance isn't necessary. A cut here, a thrust there, and another final jab finish off the unholy thing, and the room somehow seems lighter again. [Lycinia took 7 total damage and lost 2 points of STR, leaving her at 2 hp & STR 13. ]

Her battle ended, Lycinia sits down heavily against the wall to catch her breath. "One of you," she says, "had better throw the body outside. I think I've earned a rest now."

Durcet and the cook rush to comply, as Emmeline comes over to the exhausted elf. "Someday I hope you will teach me to use a longsword like that," she says. 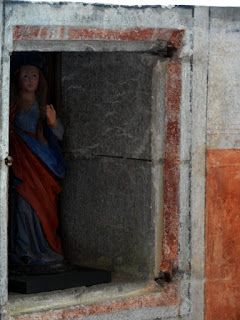