[The GM phase of 9Qs #2 resulted in an encounter featuring (roll d6 twice): (2) intrigue & (5) combat. The intrigue played out very quickly, but was a bit long when written up, so the combat will get a post of its own as well.

Between game sessions I scratched some notes down on a piece of scratch paper as to some possible directions the conspiracy could be taking. I will use this for a baseline, but if the Qs or Mythic pull it in some other direction, so much the better.

Be the PCs next: Use the heroes' abilities to respond to the strange event as per their heroic motivation and the RPG's rules.
Be the GM once more: Close the encounter by resolving NPC reactions to the heroes.

According to the Mythic randomiser, this scene's strange event is Ambush Enemies, in a Violently Poor fashion. Right, then: a poorly-planned ambush.

There is a creak as the doors are opened just enough to admit a person, followed by soft footsteps coming from behind the truck. Eshtam looks to see two men and a woman in military fatigues coming towards them with weapons at the ready. The leader starts to take aim at Slinx with his submachinegun. Eshtam's pistol is already in her hand. She raises it and fires as she moves to take cover. The bullet penetrates the man's armour, and he falls to the ground.

Everyone scatters, diving for cover behind the truck, crates, and machinery. Eshtam sees Sgt. Gytovo fire a long burst from his ACR at the two remaining soldiers killing the man outright. The woman moves to take cover behind the back of the truck, and fires her rifle at Slinx. Eshtam hears him cry out as her shot finds its mark. Starman Unamshiiguu joins her crouching behind the front of the truck. She hears shots ring out on all sides of the battlefield and scurrying feet on the dirt floor.

Sgt. Gytovo advances ahead of her cautiously along the side of the truck. A shot comes from behind her. She turns to see Slinx crouching behind a crate, and is relieved to know he's still alive. Unamshiiguu fires bursts from his SMG, ducking for cover as bullets ricochet of the truck's wheel well.

Eshtam starts to creep along the side of the truck after Sgt. Gytovo, who is suddenly running towards the doors. There are more gunshots, more cries.

Sgt. Gytovo runs outside. There are bullets flying everywhere, but Eshtam can't see anyone. Slinx jogs up behind her. The sound of a vehicle starting outside is answered by a burst from the sergeant's ACR. Eshtam sneaks around the back of the truck.

Sgt. Gytovo is silhouetted in the doorway, firing away. On the other side of the truck Eshtam sees a trio of soldiers, embroiled in a firefight with the criminals. Their backs are to her; Eshtam aims at the nearest of the three and lets a shot off. The man falls. His two compatriots wheel about and return fire, but she is already back behind the truck. Their shots whiz past.

She's afraid to peer around the truck again, afraid to move. She watches the Sergeant duck back into the building, fire a quick burst at her assailants. She hears the thud of a body hitting the ground.

The sergeant is yelling, "he's escaping out the back!" He runs past her at full speed. She runs after him.

It's dark in the back of the building, but Eshtam just makes out the shape of the soldier running. One of the criminals is shooting at him. The sergeant is still running. Eshtam has a clear shot; she pauses to fire, but hits a broken piece of machinery instead.

There's another shot near the back of the building. The sounds of running cease.

[Right, so that's how Eshtam personally experienced the fight. The whole thing, with all 14 combatants, played out like so--

Eshtam has already made her Recon roll, so there is no surprise for the encounter.

Morale will be as in Classic Traveller. The criminals need to make an initial morale check to stand and fight in the first instance. Roll = 8; They stand.

I had previously rolled 1d6+2 for each side to determine numbers. For stats, I used 1001 characters. The criminals are from the Thugs table, the enemies are four Troopers (raw recruits) led by two Army characters. (For each group, I used rpgsolo.com's die roller to roll 1d44 and 1d136, and took the stats in sequence from whichever was indicated by the 'roll'. Ain't technology grand!)

Stat blocks are an identifying letter (A-D for the criminals (I named them after the fact), U-Z for the enemies, lowercase initial for the character party), weapon (sometimes with skill level), weapon recoil if it matters (i.e., is higher than the STR mod.), and any other skills or equipment. Gender is indicated for the bad guys to make them slightly more than a collection of stats. I actually rolled 10d6 for all the NPCs in this scene (1-3 m, 4-6 f), and only 2 of those dice were 4 or higher (gaming flashback to the crappiest fireball ever cast). All weapon stats as in the main rules and mercenary, except that everyone with SMGs (er, auto carbines) is using an extended 36-round clip.

Initiative:
Tactics rolls - Sgt. Gytovo rolls 8+2=10: +2 party initiative (only; not the criminals). Z rolls 7+1=8: no benefit. The MGT initiative rules in the main book neglect to mention what to do when all combatants are equally prepared, but 2d6 + DEX mod seems to be what is hinted at. Rather than listing the initiative results, I'll just go through the round in order.

I use the both Random First Blood and Knockout Blow optional rules, which makes combat a bit more like Classic Traveller.

I also won't be recording every last die roll, just the important (or interesting) ones. Attacks are generally expressed as (die roll)+(skill&attribute mods)+(other mods: range, dodging, cover, etc.). If you're bothering to read this write-up, I already assume you can follow it. 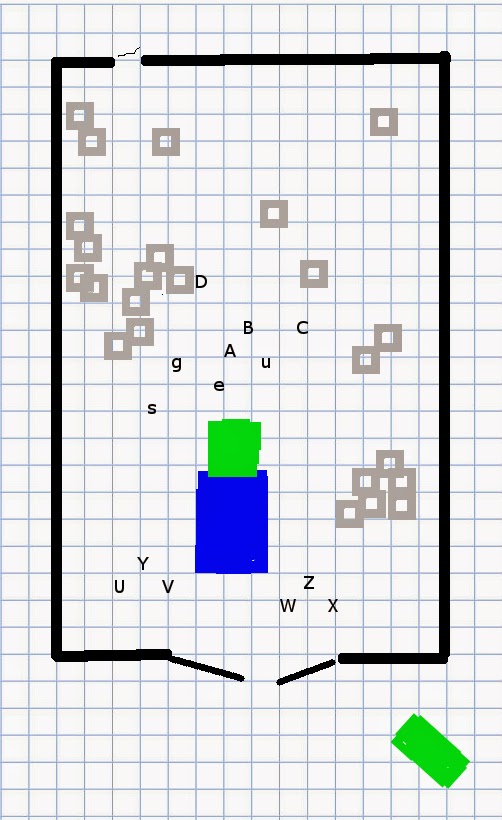 (Click to enlarge images. The blue/green shape is the cargo truck, the green shape outside is the soldiers' vehicle. All positions shown are at the start of the round. Scale is 2m/square.)

13-Z The second group of soldiers has come around the other side of the truck. Z targets u (Unamshiiguu) and B (Heni), firing his SMG on full auto. u and B both dodge (-1 to be hit, but -2 to their initiatives as well). The autofire number is 4, so he expends 12 rounds of ammo and gets to roll 4 dice, which come up 5,3,3,1. Putting the 5 and 3 together to attack u yields 8+2 -2(med. range) -1(dodge) =7, miss! The second two dice miss as well. He moves 6m and takes cover behind some junk. The recoil for full auto is increased by half the weapon's Auto score, so his initiative for the next round is lowered by 3!

10-B Heni's initiative was reduced due to his dodge. He runs to cover behind some crates. He only moved 6m, so can still attack. He fires off a shot at Z, but misses (rolled a 3).

10-U Died before his initiative came round. Bad luck.

9-D Bov uses the junk next to him for cover, but doesn't have a clear line of fire so does nothing else.

8-Y is unconscious and bleeding.

7-C Palina moves 5m to cover behind some crates. Takes a shot at Z but misses.

5-X shoots at u (Unamshiiguu), who dodges, again reducing his initiative by 2. But the dodge is just enough for the attack to miss.

5-A Sir Fenzies is a bit of a coward, even though his side made their morale check. He runs towards  a pile of junk towards the back, in order to 'cover the back door'.

3-W shoots u (Unamshiiguu), but misses.

(2)-u Starman Unamshiiguu's initiative has been reduced by 4 from his reactions. He fires a short burst at Z, which misses. The recoil from a short burst increases by 1, so he suffers another -5 initiative penalty (his STR is currently at 1). He moves 4m to use the truck for cover. 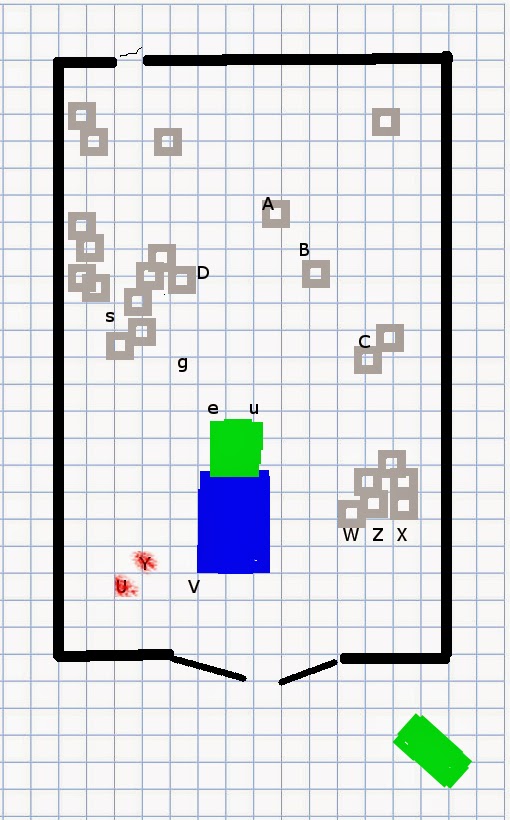 14-e Eshtam has no line of sight to any target, so stays under cover.

9-g Sgt. Gytovo moves to the side of the truck, but has no LOS to any enemy.

5-A Sir Fenzies remains crouched behind his pile of junk, covering the back door.

3-W shoots at u (Unamshiiguu) but just misses due to cover. The truck loses a headlight instead.

3-V has just seen the two in her fire team incapacitated, so needs to check morale. Rolls a 4; failure. She runs out door, using all her actions for movement.  The truck provides full cover.

end of round 2 physical UPPs: 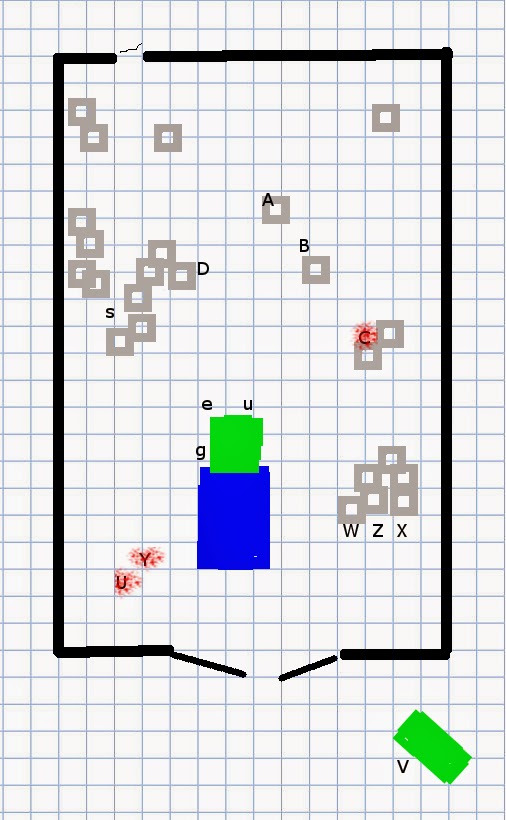 14-e Eshtam has no target. She is going to stay under cover, creeping alongside the truck after the sergeant. Her initiative is reduced to 9.

10-s Slinx doesn't want to risk shooting Unamshiiguu in the back, so holds his fire.

9-g Sgt. Gytovo runs after V, making it just out the door of the building behind the truck.

9-e Eshtam gets to move now, using all her actions to advance 9m stealthily.

5-X takes another shot at D, who ducks behind the junk he's using for cover. Miss.

5-A is still covering the back door.

3-W tries to shoot u, but hits the side of the truck.

3-V has reached the car that the soldiers came in, and spend her actions getting inside.

-1-u Unamshiiguu shoots another burst at W, missing completely. Initiative lowered a further 2 for recoil, as if it mattered.

end of round 3 physical UPPs: 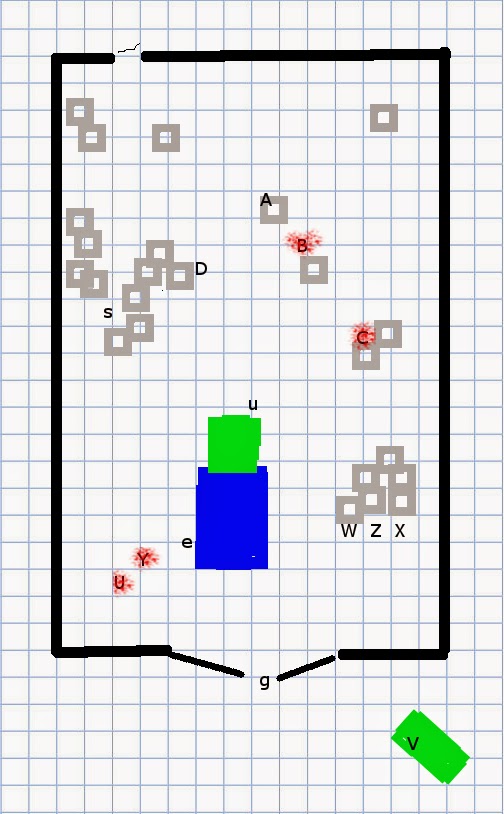 10-s Slinx sprints up to the side of the truck to join Eshtam.

9-g Sgt. Gytovo tries to shoot V through the windshield (short burst), but rolls snake eyes. He doesn't even hit the van.

9-e Eshtam sneaks round the back of the truck.

8-Z fires a short burst at u, hitting for 17 damage. After armour reductions, that's 7 DEX and 5 STR. Unamshiiguu falls unconscious.

7-D Bov needs to check morale, since his boss got shot down last round. He rolls an 11, passing with flying colours. He shoots at X, just hitting. X's armour absorbs all 3 points of damage.

5-A is still covering the back door. He can't see the rest of the fight, so doesn't check morale.

end of round 4 physical UPPs & status: 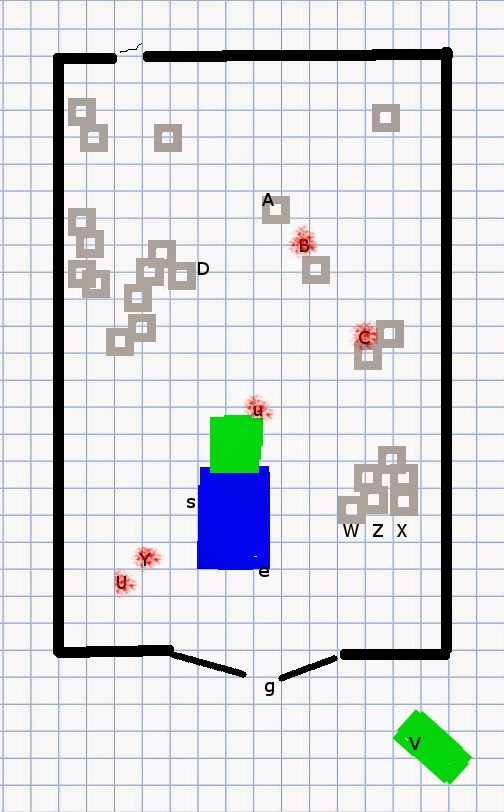 8-Z passes his morale check (7+ to stand, rolls 9+3). He wheels about to fire on Eshtam, who dodges behind the truck. Rolls 5+3 -2dodge -1short range; miss. Eshtam's initiative is reduced by 2 for her Reaction, Z's by 1 for Recoil.

5-A is still covering the back door.

end of round 5 physical UPPs & status: 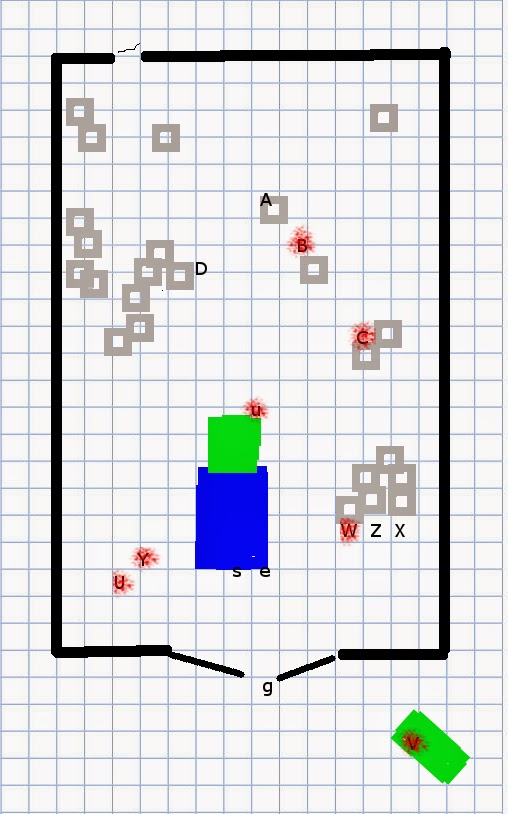 7-e Eshtam doesn't want to expose herself to autofire, so stays under cover behind the truck.

7-Z orders X to cover him, and runs along the side of the building towards the back, ending up behind some crates.

5-A still does nothing. 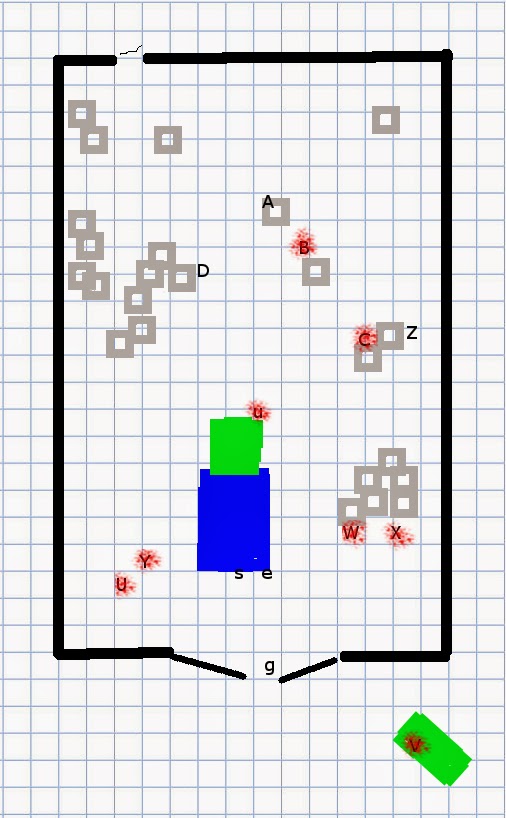 7-e Eshtam also hesitates to see what the Sergeant does.

7-Z runs to the back of the building, behind another pile of crates.

7-e Eshtam runs around the side of the truck towards the back of the building.

7-s Slinx runs around the other side.

5-A is ready to shoot if there's any movement towards the door. 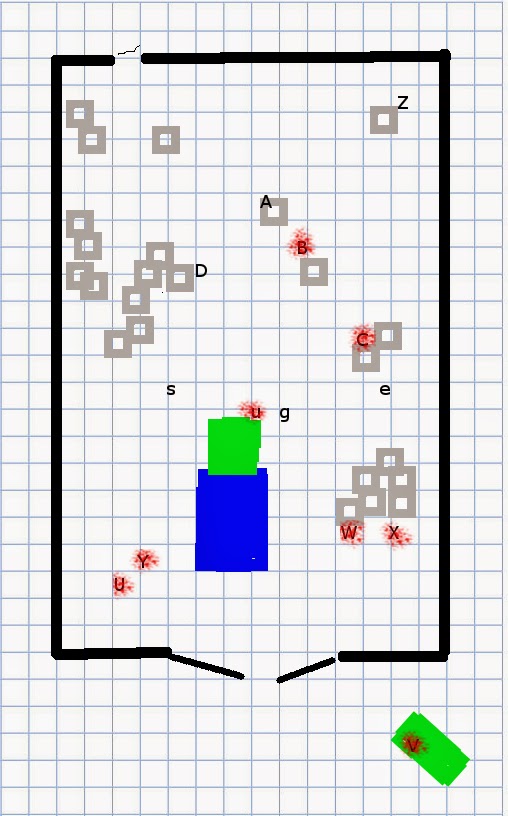 7-Z runs towards the back door.

5-A Sir Fenzies finally attacks. He hits Z for 4 points of END and 1 DEX. Z falls.