"They're not looking so good," says Miolla to her companion in the elven tongue. "What can we do?"

"We need a healer," says Lycinia, "I think we'll have to go back to Cheapington to find one. If we travel light, and bring the gems, we can get some horses there and maybe be back before they're all -- before any of them die."

"You don't think we'll make it in time," states Miolla sternly. "Please don't lie to me."

"No, I don't think we will; Cheapington is far, and the humans there are troublesome. But still, gentle Miolla, we will try."

The young Tibalt gets up from the cooking fire and sheepishly approaches the two elven women. "Did I hear you say Cheapington? You're not leaving us, are you?"

"What do you take us for?" snaps Lycinia. "But look around you: we need a healer. Miolla and I are going to Cheapington to find one. Unless you'd rather we asked the good priests of St. Gelevaard's..."

"No! I mean... well, I grew up round here. There's a shrine to the Hunting God but two days march from this place. I grew up with one of the priests!" 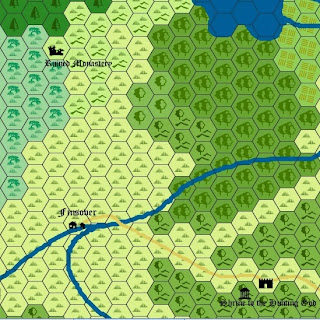 Interrupt: Expose / Friendship - Tibalt has a friend at shrine to southeast who can help

*One nighttime poison save for the progress of the disease. Beginning the morning of day 14 they will be on the same saving throw schedule as the NPCs.

There were fortunately no nighttime encounters.

Following Tibalt's welcome revelation, Lycinia and Miolla amend their plan. They will travel south to the village of Finsover, (hopefully) buy horses, then ride to the shrine to fetch a healer. They each study the Sleep spell out of Aldira's spellbook and set off straightaway. They bring all the gems & jewellery, a bit of coin, and their weapons. Tibalt accompanies them. He is as terrified of their fey nature as he is overwhelmed by their fey beauty. Miolla doesn't even notice, Lycinia finds him trying in the extreme.

Travelling light, and a making forced march, they reach the village by nightfall. They met no one traelling across the grassy plains.

Finsover is a village of about 65 souls, mostly simple fisherfolk. It would hardly be considered a settlement at all if it weren't for its position at the end of the road, connecting the land and river traffic at the kingdom's edge.

The PCs get rooms for the night in the village inn, such as it is. [check for rumour] Lycinia finds a thin book discarded on a shelf in the common room.

The book relates the legend of a king's son stolen away by the gods. A local festival is held to commemorate the event, attracting the faithful and curious from miles around. The king and queen themselves preside. The festival will be next held in [1d100] 24 days [day 38].

In the morning they see about buying some horses. [Using the d30 Companion produced the following: Are horses available for sale? Need to roll 5 or less: 4, yes (phew! saves me having to find rules for horse thievin'). Merchandise is Average quality and sells for 90% of listed value. The interior of the shop (& stables) is Modest, the horse trader's attitude is Sober; -2 on d30 reaction table. The reaction roll is (10-2=)8: apathetic toward PCs; will let them shop; unlikely to help; may refuse sale to PCs based on their behaviour/attitude; will not barter.] There are four riding horses available. Lycinia wants to buy them all, each with tack&harness, a pair of saddlebags, and 2 days feed (they can graze at the ruins, but just in case...). She offers a handful of gems as payment.

[Q: Does/can the trader appraise the gems fairly? 50/50: 45, Yes.] Lycinia hands over 400sp worth of gems and calls it a fair trade. Tibalt has been sent to buy more preserved rations to bring back to the ruins. As he returns from his errand, Lycinia and Miolla are already saddled up and ready to go.

The road between Finsover and the shrine makes it less than half a day's ride. About midday, as the horses ride over the crest of a small hill, the PCs see a group of three people -- a woman in travelling clothes armed with a rapier, and two men in chainmail with axes and heavy crossbows -- standing in the middle of the road engaged in a heated argument. They seem completely oblivious to the rider's approach [they are surprised] until Tibalt calls out for them to move aside.

They abruptly stop arguing, and one of the men approaches, saying, "Well, what have we here? Looks like our transportation troubles are solved after all! Why don't you all get down from those horses so no one gets hurt?" At this, the two men both raise their crossbows menacingly. Miolla defiantly calls out an imprecation in elvish, which they show no sign of understanding. But they perfectly comprehend her intentions as she raises her mace.

[NPCs win initiative] The woman makes a magical gesture, and speaks words of power; the air around her shimmers slightly [she casts Shield]. The two men fire their crossbows. A bolt sails right past Miolla's head, but the other one hits Tibalt squarely in the shoulder [2 damage, reducing him to 1hp] and he cries out in pain. Lycinia points towards the enemies and speaks a charm of her own; the three sink to the ground in a deep slumber [Sleep spell, affecting 9HD]. She then dismounts, and calmly dispatches the sleeping trio with her sword as Miolla and Tibalt look on, wide-eyed. "They'd have done the same," says Lycinia bluntly.

[Q: Does the MU have her spellbook? 50/50: 77, No. +Event: activity/weather (Ambiguous event)] Lycinia examines the woman for a moment, but is disappointed to find that she wasn't carrying any scrolls or a spellbook. A cursory glance at the other two reveals nothing of interest, so she gets back on her horse and they continue their journey. Just then the skies open up, drenching the party in a downpour that lasts until they arrive at the forest shrine.

The shrine itself is a simple affair, two concentric circles of low stones arranged around a venerable oak in the old way. nearby stands a thatched-roof cottage and a well, modern additions for the use of the priests who tend the shrine and minister to the faithful (hunters from the nearby villages and some of the soldiers from the fort).

Tibalt's friend is a large, well-groomed man who wears simple woodsman's garb. His name is Barnot. Despite being the head priest [6th level cleric] at the shrine, he claims no religious title; the Hunting God eschews such fripperies. He's only a year older than Tibalt, but his full, bushy beard and deep voice make him seem much older and wiser. He is surprisingly meek for a man of his stature, and he greets the elves with great humility. He ushers everyone into his cabin out of the rain, attends to Tibalt's injuries, then goes out to tend the horses.

That evening, Barnot listens to his guests' tale in front of a crackling fire, and serves them a hearty pheasant stew. The next morning, the four of them saddle up the horses in the cold autumnal dawn, and set off back to the ruins with all speed...