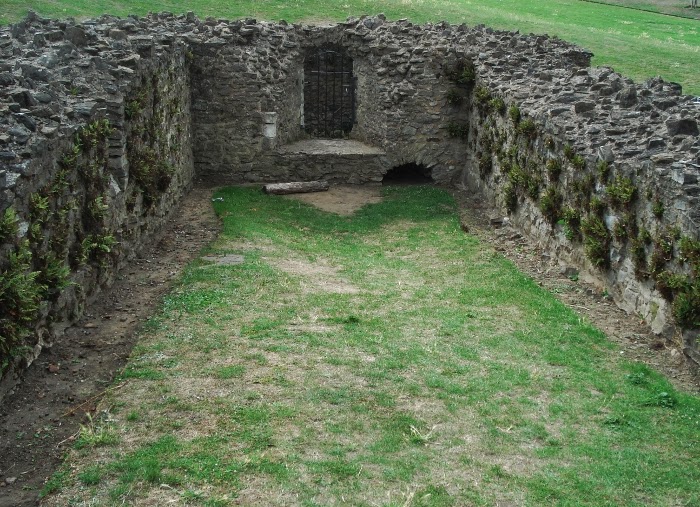 Setup: Unaltered - Into the dungeon again

Before going to sleep the party meted out the healing potion and the rest of the salve. That night they all heal one additional hit point, except Firdeth and Oighonlaer who are under half.

By morning, Firdeth (2/7hp) and Oigonlaer (2/5hp) remain seriously injured, Benyithelnol and Théscine are lightly wounded (both at 3/4hp), and the rest have made full recoveries.

Fortunately there were no encounters during the night.

Elves with no decent spells are just poor fighters. Lycinia decided to try convincing Aldira they should be allowed to study her spellbook.

Q: Can they convince her to agree? Unlikely: 48, Yes. Everyone casts Read Magic before bed so they can use it (in turns) in the morning.]

It is decided that Firdeth and Oighonlaer (with Tibalt, Aldira, and Yrene) will spend day at rest (healing 1 hp each), whilst the other 6 PCs return to the dungeon.

They spend five hours preparing spells out of Aldira's book.

Benyithelnol prepares Faerie Fire, Debinvarr prepare Unseen Servant, Théscine studies Enlarge, and both Lycinia and Miolla memorise Sleep. Caerindíl prepares Read Magic out of his own spellbook in the hopes that they will uncover a scroll. 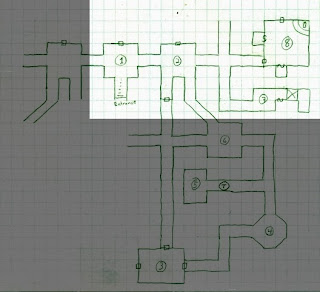 All preparations having been made, they descend into dungeon in the early afternoon. From the entrance hall [room 1] they once again head to the west, and continue down the western corridor out of [room 2] the tentacle thing's lair. They head south from the 4-way intersection and enter a chamber [room 7] which is strewn with more débris and offal, but devoid of anything truly interesting.

Proceeding west down the corridor out of the chamber nearly results in disaster. [Trick/trap: Secret Door -- unless located (elf locates 5 in 20), Pit, 10’ deep, 3 in 6 to fall in.] Lycinia, in the lead with a torch takes a step and feels the floor fall away beneath her. She totters on the edge for a moment, but manages to stagger back from it without falling in. The pit is 10' deep and 10' across: inconvenient enough to cross that the elves decide to turn round and try another path. They return to the intersection, and follow another corridor. 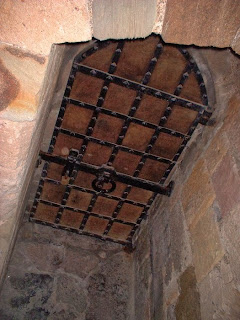 They open a door and come into a large, square room [room 8, contents: Special], which appears empty at first, lacking even the general muck they've become accustomed to trodding over. Lycinia has walked to the middle of the room before her torch finally illuminates the far corner. Her eyes grow wide with what is revealed. A squat stone obelisk sits atop a low dais. Surrounding its base is a glittering pile of silver coins, with a few precious stones mixed in as well.

The party inches forward cautiously, wary of potential traps and guardians. Lycinia notices some sort of runic inscription on the obelisk. She raises her torch and peers at it closely. Then the world seems to buzz. Waves of force emanate from the runic Symbol, overwhelming all in the room with ineffable agonies, as if their very souls are being shredded by the claws of some nameless fiend. The peals of a gong reverberate throughout the room - is it really a sound, or is it just their nerves screaming? Lycinia's vision blurs as she falls to her knees. Théscine begins to weep. Benyithelnol is sick. The others stop still in their tracks, wincing, gritting their teeth, praying silently for release [Symbol of Pain: Each creature within 60' suffers wracking pains that impose a –4 penalty on attack rolls and –2 to Dexterity. These effects last for 2d10 Turns.]

Then Debinvarr is screaming-- no, he's shouting, shouting out a warning. The door is quietly swinging closed, as hidden panels in the wall fall open. Eight hideous undead emerge, foul and festering corpses [Festering Ones] dripping with corruption. They plod forward, arms outstretched and grasping. The elves summon all their resolve to do battle with the foul undead.

[round 1. fortunately there was no surprise, and Festering ones, like zombies always lose initiative. The effects of the Symbol of Pain have worsened almost everyone's AC, and for the -4 to hit I increased the monsters' AC to 17 to simplify things.] Théscine casts Enlarge upon herself as the things approach. Miolla swings her heavy mace in a wide arc, knocking the head of one of the advancing horrors clean off. Benyithelnol finds the strength to connect his mace with another, but his lighter weapon and lesser strength do not produce quite the same result as his companion. Théscine tries to bring her sword down on the head of one of the things, but steps in too close to be raked by its filthy claws [5 damage reduces her to -2hp. Note to purists: she did not actually get an attack roll this round as she already acted in casting a spell. But I prefer interesting descriptions to cold enumerations of game mechanics]. She collapses from the shock.

[round 2.] The confused mêlée swirls in the centre of the room, made even more confusing by the wildly flashing light of the lantern swinging in Benyithelnol's hand, and Lycinia's fallen torch rolling on the flagstones. Miolla and Debinvarr both manage to strike one of their opponents, and though oozing flesh is torn and rotten bone splintered, neither falls. Benyithelnol staggers back as a gooey fist pummels his chest [1 damage, leaving him with 2hp]. Caerindíl fares far worse; one of them lunges forward and fastens its teeth in his neck [6 damage, reducing him to 1hp].

[round 3.] Caerindíl skewers his opponent with his spear, and manages to push it back away from him. Luck briefly seems to smile down upon the noble elves for a moment; all of their weapons strike true. Debinvarr's and Benyithelnol's foes are destroyed, so the sides are now even (5 against 5).

[round 4.] O Fortuna, thou art fickle! The elves fare poorly in attacking, scoring only a pair of hits, and neither telling. Debinvarr gasps as two filthy hands crash down on his shoulders. He falls motionless to the floor [5 damage, 0hp left]. Caerindíl's opponent knocks his spear aside, and rakes gangrenous claws down his face and neck. The life pours out of him, he falls and is still [6 damage takes him to -5hp, dead].

[round 5.] Debinvarr's attacker turns to face Miolla, who caves in its chest with her mace. Benyithelnol rushes in to avenge Caerindíl, but he is grabbed by gangrenous claws which tear and rip and rend [6 damage, dropping him to -4hp, dead]. The mace falls from his now slack fingers. He sinks to the ground and is no more.

[rounds 6-9.] Only Miolla and Lycinia are still standing, facing four of the putrefying undead. They stand back-to-back, sword and mace swinging wildly at the ever-advancing foes. Fighting through the pain still permeating their very beings, they cleave through bone and flesh and foulness. Each of them drop two of the gruesome monsters. Finally they turn, short of breath, scarcely able to stand, yet grinning up at one another as they realise the battle is won.

"Good fight," gasps Miolla, "you can always have my back! Those things... never even touched me. You?"

Her eyes go wide as she notices the blood running down her arm [she took a single point of damage in round 7]. She stares dumbly at it until she feels Miolla's hand on hers. "The others," she says, "we have to see to the others."

They examine their fallen comrades. Their joy at finding Debinvarr and Théscine still living is tempered by their sorrow for Benyithelnol and Caerindíl. They join hands and whisper a sweet elven prayer, then turn their minds to the task of getting out of the dungeon with the living, the dead, and the treasure.

Splashing Debinvarr's face with water from one of the waterskins revives him enough to hobble about with some support. Théscine remains comatose. When she returns to normal size, Miolla (the strongest of all the elves) carefully lifts her onto her shoulder whilst Debinvarr leans on Lycinia as they retreat slowly towards the exit.

Once outside they collapse in the grass. They make their way back to the camp, and tell their anxious comrades about the events of the day. After a couple hours the lingering effects of the awful Symbol wear off. Lycinia and Miolla decide to make a hasty trip back down into the dungeon to recover their friends bodies and the treasure.

They sneak back to the room by a sliver of lantern light. Once there they make doubly sure that none of the corpses are yet moving, then with exceeding caution approach the obelisk. They throw a cloak over it, lest they unwittingly see the accursed Symbol and suffer its baneful magic anew. They then scoop all the coins, gems, a small glass phial, and a leather scroll case into a pair of sacks, before dragging them and their friends bodies out towards the exit (Miolla carrying the lantern gingerly in her teeth).

The sound of their passage attracts attention [I made a wandering monster check for each room & corridor traversed; only one encounter was indicated]. Five strange blue beasts [#9s] are crawling towards them, blocking the passage. The things are about 8' long, slender and snake-like, but possessed of two powerful arms which they use to help pull themselves forward. The arms end in 7-fingered hands, whose long claws scrape against the stone floor. The seem to have no actual head, just a long proboscis ending in a sharp, bony point.

[Neither party is surprised, PCs win the initiative] Upon seeing the things rushing to attack, Lycinia lets go of the sack she'd been dragging, gestures for them and speaks a single word. All five of the beasts sink peacefully to the ground in an enchanted slumber [Sleep spell: I rolled 10HD for its effect]. Lycinia and Miolla put down their remaining burdens carefully, walk forward and put the sleeping creatures to the sword. "They'd have done the same," says Miolla regretfully.

The pair succeed in dragging the bodies and all the treasure back to the surface without further incident. They bury their friends in a nearby copse so their spirits can find solace in the forest.

The three who were injured by the festering ones need to save vs. poison to avoid contracting the rotting disease; Théscine and Debinvarr fail, Lycinia succeeds. The incubation time is only 4 hours, so they show signs of illness before their friends are interred.

The six who survived the dungeon this day each receive XP. The total is 600: 400 for the fight with the festering ones and 200 for the death of 2 party members (thanks to Bluebear Jeff  for the idea). Each survivor thus earns 150xp for combat.

Miolla and Lycinia each earn 25 additional XP for their return to the dungeon.

XP for treasure has to wait until the party bring it back to civilisation. But the treasure itself is pretty good for a change:


[The next post discusses characterisation in this adventure; the adventure continues in teh post immediately following]
Posted by Alea iactanda est at 20:54