LotFP Solo - Part the Fifteenth: "We have survived a ruin wide and deep— / Strange thoughts are mine.—I cannot grieve or fear"

"Well, there's all these dwarves held captive in the ruins. They've been tortured by the things that dwell below. They seem like... like they're just gone, inside. They don't react to anything we do or say. I think only thing keeping them alive is the weird magic that permeates the place. So what do we do? If we drag them outside, do you think they'll just die? And if not, can you help them?"

Brother Mundlo considers her words for a few moments before responding. "There is nothing I can do for them. The dwarves have their own gods, who do not give obeisance to the Light God, who is, as you must know, the Supreme God and Most High. When the world was young, even your elven gods came outside into the light, and though they are not subservient to the Light God directly, they praise his divine Luminescence. The dwarves stay down underground in the realms of Darkness and Stone. Leave them then, say I, leave them to their fate in these accursed halls of stone."

So saying, Brother Mundlo returns to his afternoon devotions. Lycinia walks back into camp to consult with her companions.

"Well?" asks Debinvarr hopefully, "what did he say?"

In the morning, Una is buried. Aldira spends most of the day by herself, sitting atop a crumbling stone wall and holding her deceased friend's spellbook, but never once opening it. Miolla tries her best to comfort her, but Aldira just wants to be left alone, and repels the well-meaning elf with overly harsh words. The rest of the elves debate what to do about the dwarves languishing in the dungeon, and eventually decide to send Lycinia to ask the cleric's advice [see above. I rolled his response on the Mythic charts and got Abandon / The innocent]. 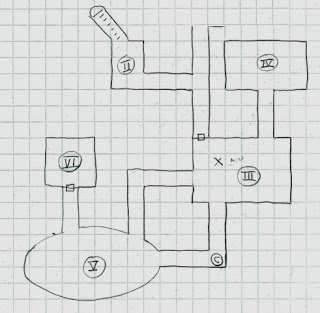 The next day, healed and rested, they return to the dungeon. They head straight for the stairs, then descend and proceed carefully through the corridors, back to the room where they fought the grisly undead swarm [room III] to try the north exit. Once there, they see flickering torchlight spilling into the short corridor, and try to advance quietly.

The room [room IV] was once a shrine to the Light God's pantheon. Most of the furnishings have been abused and destroyed, the cult statues defaced and repainted to represent gods of filth, darkness and decay. The altar is stained with blood and other, less-identifiable substances.

Four acolytes are here to tend the shrine and worship infernal powers. They are masked and hooded, and dressed in heavy robes of black sackcloth. Each bears a carved bone unholy symbol, and wears a scimitar at their belt.

[room contents roll was Monster & Treasure. The 4 acolytes' (3xC1, 1xC3) reaction roll is 4. No surprise is possible, Initiative is tied, so everything will proceed in descending order of DEX.]

The evil clerics stop when they notice the party enter. Taking one look at the group of elves, the leader hisses, "Kill them!" As they draw their swords, Miolla pronounces a powerful charm. The clerics sink to the floor fast asleep [rolled 7HD for Sleep]. The PCs waste no time in caving their skulls in. There are three fine golden candlesticks (900sp each) on the altar that seem worth saving, even though they will probably have to be handed over to the cleric for re-consecration. Miolla tosses them in her pack. 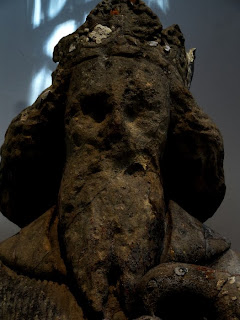 They then go quickly back through the charnel carpet room, taking the southern exit and following the corridor as it turns west.

They come into an enormous oval-shaped room [room V] with a high, domed ceiling. Large tripedal braziers, made of age-worn and besooted brass, line the walls at intervals of about 10'. They are filled with coals, but not lit, and cold to the touch. There are bloodstains and chalk markings toward the room's centre. On either side of the main chalked circle, sturdy iron chains are set into the floor, each ending in some sort of collar. The room is otherwise silent and empty.

A rank, animal smell comes from the passageway leading north out of the room, but no sound of movement is heard. The party walk quietly up the corridor, and come to a stout, reinforced door. It is unlocked, and opens into a large, dark room [room VI]. The animal smell is overpowering, but the torchlight reveals nothing in the front half of the room. As the party advances across the floor, something leaps out of the darkness to attack.

The furious beast [the Bounding Horror] has an enormous, barrel-shaped body, beneath which is a single powerful, strangely-jointed leg. It appears to have no head or eyes. Two thick, boneless limbs protrude from the centre of the torso, ending in stubby-fingered hands. Its great mouth is full of many rows of blunt, yellow teeth, and its swollen tongue hangs limply forward, emitting a constant stream of foul saliva. Its green-black skin is smooth and oily, and emits an almost overpowering odour.

[Room contents = Monster only. PCs win initiative. Round 1.]
Miolla strikes out at the slavering beast, hitting it solidly with her mace [10 damage]. Aldira attempts to ensorcel it, but the things shrugs off her spell as if nothing had occurred [she cast Sleep, but only affected 4HD]. Lycinia slashes at it as it bounds away, inflicting the merest scratch [3 damage, it's now at 24hp], but in avoiding the worst of her blade its swinging fist failed to hit her at all [rolls a 6 to attack Lycinia, which would have missed her without armour].

[Round 2]
It's difficult to hit the thing as it jumps about the room. Lycinia manages another minor wound [3 damage again]. Firdeth slashes a great cut down its back, exposing fat and bone [5 damage; it's down to 16hp]. She deftly steps under its wild counterattack.

[Round 3]
Miolla hits it again with her mace [5 damage] and Lycinia finally manages a telling stroke [7 damage, dropping it to 4hp]. Firdeth comes in again, hoping to use her small size to stay under its twirling fists, but the thing is now on to her, and smacks her hard across the left shoulder [3 damage, leaving her at 4hp].

[Round 4]
It is sorely wounded, and an unearthly squealing emanates from its horrible mouth. Its leaping has become wilder, its swings more frantic. It is nearly impossible to find an opening for attack. Firdeth comes up behind, ready for the kill. Whether she erred in her judgement, or had angered the Fates, none can say. The beast sweeps its fist in a deadly arc, catching her full in the side of the head and snapping her neck. She falls like a discarded puppet and will never rise again [9 damage brings her to -5, killing her instantly].

[Round 5]
Miolla takes her mace in both hands, and raises it above her head. She brings it down upon the creature as it leaps in front of her, caving in the upper part of its mouth and raining yellowed teeth across the stone floor. It crashes to the floor, leaking some sort of clear fluid, and exhales its final breath [she did 7 damage, bringing it to -3hp: a mortal wound].

Miolla goes over and gently picks up her friend's tiny body. "No more for today," she says, "please..."

Lycinia goes over and wipes the tear from Miolla's eye. "No more for today."

They party make their way back to the surface. As they come into the room [room 10] near the top of the stairs, they are surprised to see another group of masked and robed acolytes heading towards them.

[wandering monster: 8 acolytes. Evil, here to worship the source of corruption. reaction = 10. 'surprised' was narrative, not a game effect.]

The leader motions for the rest to halt, and pulls aside her mask to speak; her face looks to be in the early stages of leprosy. "Come with us, friends," she says, "Worship with us at the altar of foulness! May it change you forever with its all-embracing corruption. Join with us. We can offer power the likes of which you've never dared dream of, wealth the likes of which you could never truly imagine. What do you say?"

Lycinia sheaths her sword, as her friends look on, puzzled. "I say... obdormitote!" And with the magic word and a gesture, four of the acolytes sink into a fast slumber.

[round 1.The party wins initiative. Lycinia has already cast sleep, but only rolled 4HD for the effect. There are three 1st level and one 3rd level cleric left standing. Their stats are:

Each is armed with a scimitar.]

Miolla gently puts down Firdeth's body and draws her mace. Aldira fires her crossbow, but the bolt sails harmlessly past the clerics and sticks in the wooden door. The lead cleric [a] says a short prayer which causes the elves hair to stand on end [Protection from Evil on self, which affects elves as they are magical creatures]. One of the other acolytes orders Théscine to "Begone!" [casts Command; no save for her is allowed] and she obeys, running back into the corridor and down the stairs.

[round 2]
Lycinia draws her sword and rushes at the lead cleric. She swings at her viciously, but is repelled by the divine aura surrounding her opponent [missing by 1 due to the spell]. As the lesser clerics move to attack ; Miolla's mace lays one low [b, 5 damage, down to -1hp], and another is transfixed by Aldira's rapier [c, 7 damage, also to -1hp]. The remaining aspirant attacks Debinvarr, delivering a punishing wound [4 damage, leaving him with 1hp]. The lead cleric attempts to overcome Lycinia with divine might, but she is unmoved by the Command to 'Flee!', and responds with an equally unheeded and most un-princesslike rejoinder of her own.

[round 3]
The clash of steel on steel rings throughout the room. Debinvarr manages a glancing blow against the aspirant [hits d for 3 damage].

[round 4]
The lead cleric is staggered by the combined attacks of Lycinia and Miolla [who hit for 8 and 3 damage, respectively, dropping her to 6hp]. Debinvarr inflicts another light wound against the aspirant, who collapses [1 damage brings d to 0hp exactly].

[round 5]
The divine energy around the head cleric dissipates. Lycinia lunges forward, burying her sword in the evil woman's stomach up to the hilt. She withdraws it quickly; blood gushes forth and the light leaves the cleric's eyes [6 damage drops her to -3, a mortal wound].

The party make short work of the remaining acolytes, as Théscine sheepishly returns. Miolla once again carefully lifts the slain Firdeth, and they all continue out of the dungeon and into the fresh autumn air.
Posted by Alea iactanda est at 20:03