LotFP Solo - Part the Nineteenth: "But from the hour he waved his parting hand / Each trace waxed fainter of his course"

In Huntsman's Gate, the PCs hear rumours of a witch who can dispel curses. She is said to live somewhere in the forest north of Casterbury [~hex# 56.48].

Setup: travel to Casterby to (hopefully) pick up Neldir's trail

There's 38 miles of road separating Huntsman's Gate and Casterbury. The party can make it in a single day if there are no major interruptions.

On the road an encounter with an NPC party is indicated: Spc2, 2x C2, D1, F1. The d30 companion indicates they wish to parlay.

Q: What about? Decrease/Animals. The lead NPC (the specialist) approaches the PCs and triesto sell them their (1d6=)5 extra horses. The PCs certainly don't need them, but they tell the NPCs about the griffon.

In the afternoon, on the road between Fort Ander and Emffort, there is another encounter: a merchant. With the d30 companion, I roll up a male dwarven seasonal book merchant with average stock. The PCs are extremely interested in perusing his wares.

Q: Does he have anything interesting written in Dwarven*? Likely: 02, exceptional yes.
Q: Any good Human* books? 50/50: 16, Yes.
Q: Any Elven* ones? Very unlikely: 47, No.
* more specifically, the most common elven, dwarven, and human** languages in the area.
** which I've vaguely determined, based on how I've been naming things, are vague fantasy approximations of middle english (for commoners) and middle french (for the nobility)

With the LotFP language rules, there's a 1-in-6 +INT mod. base chance for each PC to know dwarven, modified by -1 since its an alien culture. Thus, only Lycinia and Aldira, have an actual chance. Lycinia rolls a 1, Aldira rolls 6; only Lycinia knows dwarven.

Since I rolled an Exceptional Yes for the dwarven book, I'll use my grimoire generator (work-in-progress; alas, not quite in a state where I can share it) to generate something interesting.

The Image of Nothingness
a fragmentary minor grimoire, written by an insane sorceress
This book is actually a commentary thereon, written in dwarvish, but it preserves the remains of the original text so that a spell is contained within: Dispel Magic.

Aldira buys The Atlas of the Void, an anonymous esoteric treatise (containing no spells), for 500sp worth of gems.


The PCs bid farewell the the dwarven merchant, and promise to look for him inthe area next season. The arrive in Casterby at dusk and take rooms at the only inn, the Knave & Sheriff.

Casterby is a small town (pop. ~240). It is ruled by a council of 12 elders, and there are issues of major corruption undermining the town's weal. The economy is, in fact, doomed and has a 1-in-30 chance of collapse each day (checking in advance: it will collapse on day 118). 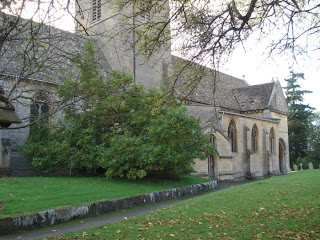 The next morning the party get up early to visit the head priestess in the small church. When they enter the small stone building, they find a young man in monk's robes puttering about, ostensibly straightening up. The cleric, friar Hirvid, seems somewhat reluctant to help until Aldira drops 5sp into the collection box, at which point he runs to fetch the priestess.

The Rev. Mother Tourterelle [C5] is a sprightly octogenarian. She moves very slowly, walking with a gnarled stick, and appears to have been sleeping in the vestry when friar Hirvid went to get her, but is still very personable and in posession of her faculties. She seems initially suspicious of her visitors, but relaxes considerably when Aldira presents her with the scroll from Dame Lisbeta [reaction of 8, +2 for the scroll=10]. She breaks the seal, peruses the contents for a moment, then hands it to the friar, telling him to put it on her writing desk. She turns back to her expectant visitors, and asks how she can help them. They briefly explain that they are searching for the renegade elf, Neldir, and were told [back in part 10] that he may have come to Casterby seeking to acquire vampire blood from the vampire said to be plaguing the area.

[Q: What does she know about Neldir and his plans?

Bibliomancy: Aut arguta lacus circumvolitavit hirundo ; / et veterem in limo ranae cecinere querelam
Vergil, Georgics I.377-8
(Or the flitting swallow flew round the lakes / and in the mud the frogs sang their old complaint)

Interpretation: He's going to a place by a lake(s)
I rolled a d80 and a d60 to find a general area on the master Hexographer map, with the intention of picking the nearest suitable hex. I got hex 64.30, which fits perfectly, so no adjustment is necessary.] 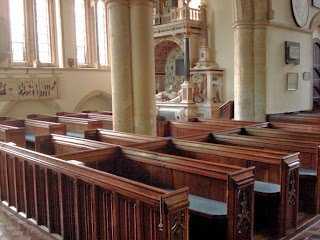 "Vampires?" she says, "oh, no! There are'nt any vampires around here. The only blood-suckers are sitting on the elders' council. They'll bleed this town dry, you mark my words!

"But there was an elf through here a few months back. I think his name was Neldir. Strange sort... kept away from the church, but that's none too surprising. He stayed at the inn for about a week. Spent most of his days exploring the forest.

"Then three more elves arrived, travellers coming back from Aylesbyrig. I overheard them talking at the inn; I suppose they didn't think anyone this far from Cheapington really knew their elvish! He convinced them to join him in his travels. He was heading to Chateau Pruduems, about 50 miles N-NE of here. The chateau is the ancestral seat of the Count d'Estancbel, a man of unpleasant reputation. He's supposedly making a power-play --again-- and your friend Neldir is aiming to put a stop to it!"
Posted by Alea iactanda est at 15:11