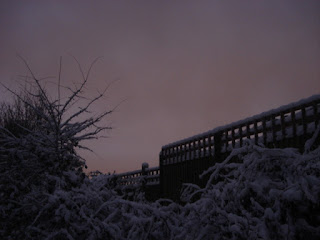 Emmeline takes charge of Lady Margiste, but Manfred rudely shakes off anyone who tries to console him. He sits for a long while, immobile and staring, then suddenly comes back to himself, angrily banging his fist down on the table. "Dammit, there's no use sitting here and moping like children. Has anyone searched the valet's chambers again? or the groundskeepers' cottage? or the gamekeeper's?"

A search party is quickly formed. Manfred's companions are worn out from their journey, but he himself has the energy of his purpose, and insists on leading the party. Lycinia, Severin and Frère Ambrosius go with him.

Outside the snow is deep, and the wind howls through the battlements and around the towers. The aged cleric requires the steward's assistance to walk without being pitched over.

The groundskeepers, brother and sister, have a cottage built right up against the curtain wall. It is a cozy little wooden affair, with an adjoining shed full of their tools. It is also currently on fire.

The gamekeeper's cottage is outside the walls, and undamaged. It looks to have been abandoned for several days. The searchers turn it over thoroughly, but nothing of any value is discovered. 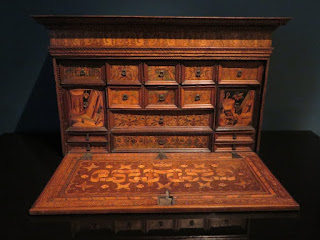 The search party trudges back through the snow and wind, and are relieved to finally reach the (relative) warmth and calm inside the castle. They ascend the main stair and set off into the east wing, wherein the senior castle staff have their private rooms. When they push open the door to the valet's chamber, they are surprised to see a lamp burning brightly within. Franval, who had come back to retrieve his secret spellbook, is just as surprised to see the door open.

There is a small, leather-bound book lying on the bed amongst some papers, a coinpurse, and a few bits of jewellery. Both Franval and the searchers start at the unexpected encounter, and then Franval begins the words of a spell.

[Round 1 - Both sides were Surprised, Franval wins initiative]

The magic takes hold of the steward and confessor; they fall to the ground in a deep sleep [Sleep affecting 7 hit dice: not enough to include the 4th level Manfred]. Meanwhile Manfred and Lycinia have burst into the room. Lycinia grabs Franval bodily [opposed grappling rolls (1d20 + Str adjustment + attack bonus) L 15+1+1, F 2+0+1] and holds him fast. Manfred threatens the struggling valet with his rapier [Franval's ML is (best2/3d6) 11] but to no avail.

[round 2]
Franval continues to struggle against Lycinia's hold [opposed grappling checks] but cannot extricate himself from her grasp. Manfred changes tack, and hits Franval in the face with the basket hilt of his rapier [counts as a minor weapon, 1d4 damage. 3 points drops him to 5hp].

[round 3]
He still continues to struggle [opposed grappling checks again] but is forced to the ground, and can fight back no more.

Franval is bound, gagged, and blindfolded. Severin (once awakened) stands guard, holding Manfred's sword at his throat whilst the other three search the room. Luckily, most of the important items seem to have already been put on the bed.

Under some of the papers on the bed is an ornate silver cup, which at first appears to be a ceremonial item like one might find in any temple of the Light God, but on closer inspection is covered in arcane sigils. The confessor says he saw similar markings on the eerie silver mask. 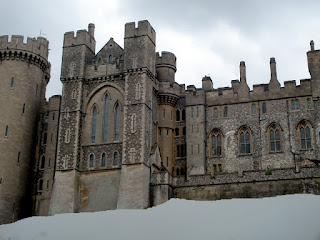 When the search party returns to the great hall with their prisoner, they find that they were not the only ones to have had some excitement. One of the maids is tied to a chair, unconscious and bleeding. The cook is winding a strip of cloth round her middle as a bandage [She's at 0hp; this is the aftermath of the Interrupt from scene 21; the d30 horror result for the maid had come up 'Mania'].

A tearful Emmeline runs up to Lycinia. "The maid took a carving knife from the kitchen," says the girl, "and out of nowhere she just attacked me. Oh, the look on her face! Those eyes will haunt my dreams for the rest of my days! I was so frightened she'd kill me. And you weren't here and my sword is in my room, and... well, luckily for me you taught me how to avoid blades as well as swing them so I leaped out of the way and screamed for help and then Gerdie rushed over behind the maid and then suddenly there was two feet of steel sticking out of her stomach and she dropped the knife and I thought Gerdie had killed her but she hadn't but there was a lot of blood and so we tied her up because she might still be possessed but she hasn't woken up yet and--"

"Emmeline, sweetie, you need to breathe before you pass out!"

"I'm glad you're all back," says Gerdie, pointedly ignoring Emmeline. "We been shut up in here for days, like, and no one's yet thought about lookin' to see if anything funny's hid behind the secret panel. Severin, you still got the key?"

Severin, Durcet, and Frère Ambrosius all look a little embarrassed that Gerdie thought of this before they did. The steward produces the key as Gerdie lifts one of the painted wooden panels off the wall to reveal a cast iron door about 3' square. The key grates in the lock, the hinges squeal, and the alcove inside is covered in dust. Within are a piles of papers, a few ledgers, small wooden boxes, and a few money bags, one of which has split and spilt golden coins.

"None of this looks unusual," says Severin, poking about half-heartedly. "Just some emergency cash, a few deeds and old-- ah, wait... here's something. What's this?"

Shoved inside one of the books is a collection of large sheets of parchment, evidently ripped from a larger codex. They are hand-written in the old scholar's tongue [this world's Latin cognate, known to all wizards and scholars], and covered in arcane diagrams, sigils and charts. "The Manuscript of Diabolism," he reads aloud, "I don't like the looks of this. My lord, what would you have me do with it? It is after all, in the castle safe, and so yours by right."

"I'd like to have a look at that," says Iexelcis, Manfred's wizard companion.

"Manfred!" shouts the Frère Ambrosius, "That is out of the question and you know it! You can't let an evil thing like that remain in this house. We must burn it immediately."

Manfred seems unusually flummoxed by the opposing viewpoints. "Shut up everyone," he yells, "I need to think."

"Sorry, Iex," he says after a long silence, "but Frère Ambrosius is right. If it is an evil thing, it ought to be destroyed. Especially with everything that's happening here."

"No, wait!" shouts Lycinina. "What if it holds a clue? Can we risk passing by a chance to determine what's causing this mess?"

"Dammit! I don't like having it around. But the elf might be onto something. Iex, you look it over; I know I can trust you." 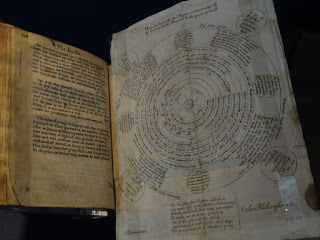 Iexelcis takes the pages to the table to read by the light of the chandelier.

Meanwhile, Franval is tied to a chair, and ungagged for his interrogation. He flatly refuses to speak. Manfred wants to beat information out of him, but Lady Margiste balks. "What if he's not to blame," she says, "what if he's possessed like the maid?"

Manfred reluctantly gives in to his sister, and angrily goes to replace Franval's gag. As he is about to do so, Franval spits out a cryptic message [UNE: insane - fear - knowledge]: "You're all hiding in here, afraid of what you'll find outside. But will the hiding drive you to madness before you even learn the truth? You're all doomed! Doo--"

And then Manfred's fist has silenced him.

The hour is late, and there is no one but who feels exhausted from a mixture of fear and exertion. They set a watch and do their best to sleep through the night. Outside the storm rages. Snow falls, sleet and hail patter against the windows. Now and again there is even thunder, and the flash of lightning. This is no ordinary storm...