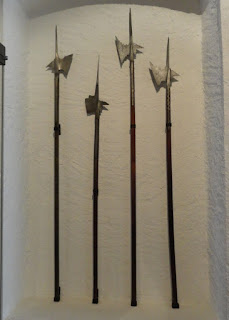 Somehow everyone manages to get a little sleep. In the morning, it is decided that arming the entire assembly in the hall is the first step in any plan, so a small band is dispatched to fetch weapons. Severin takes the lead with his great keyring, followed by Gerdie and Lycinia. Iexelcis goes in Manfred's stead as he is soundly sleeping. The cook, a round woman in her mid-50s, completes the band.

The first stop is Lycinia's room, which had been sealed whilst she was imprisoned. The steward unlocks the door, and the anxious elf bursts inside. "Oh, my lovely spellbook, how I've missed thee! And my beautiful sword! And don't you feel left out, O my chainmail! you know I feel incomplete when you're away." The others look on this scene in silent wonderment as the elf joyfully dons her warlike things. "Right," she says once she is armed and armoured, "now let's see to the rest of you."

Gerdie's room is next. She too seems happier with chainmail and broadsword, and gives her rapier over to the steward.

They then trudge outside to the gatehouse through the biting cold. The door still stands ajar from the secretary's ill-omened visit, and bangs against the stone wall in the wind.

The stench inside the guardhouse defies all reason. And in the middle of the floor, spread over the corroded remains of some weapons and suits of chain armour, and some half-dissolved bones, is a great pool of greenish-black filth, which even now seethes and bubbles with activity. The cook nearly faints from the sight, and has to be supported by the wizard. 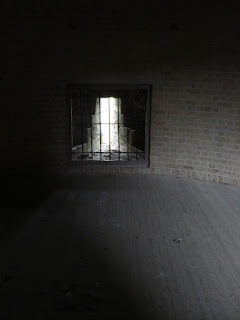 Severin tells them to wait outside. It is the last thing he will ever say. In that instant, the slime rears up, supported on a framework of jumbled bones in a roughly hexapodal shape. It springs forward at the startled castle steward.

[no surprise, it wins initiative]
Severin tries draw the dagger at his belt whilst backing away from the viscous horror, but never gets a chance. A dripping pseudopod hits him across the face, peeling flesh away as it retracts. He shudders once, then collapses [5 damage + a failed save for 3 more puts him at -3hp, mortally wounded].

Lycinia and Gerdie step forward, swords in hand, to battle the unholy creature. Their blades whirl and flash, and in a few seconds it is all over. The creature collapses back into gooey mass on the ground [2 rounds of combat dropped it to exactly -3hp; L&G both hit twice, it only missed].

They both look quickly about the room, and find some old cloth to wipe their blades clean. But as they do so, they fail to notice that the the creature is starting to coalesce again. It rises suddenly, and lunges at Gerdie [2 rounds of regeneration have brought it back to 1hp; it's not smart enough to wait any longer -- it merely exists to destroy all life. The surprise die comes up a 1, so the PCs are caught completely unawares]. It slams hard into her back, knocking her face first into the wall [6 damage drops her to 14hp] but fortunately none of the caustic venom seeps through her armour to her skin [she made her saving throw vs. poison]. Even as it is attacking her, it continues to become more cohesive [regenerating to a total of 3hp].

[next round]
Once again Lycinia and Gerdie bring their swords to bear. Lycinia's stroke knocks it back to the ground, and Gerdie's hits something more solid, which produces a loud crunch. The thing dissolves completely into a runny, oily fluid, seeping along the cracks in the floor and spreading in a wide, foetid pool. The two watch it for some time, fearful of another resurrection, but it moves no more.

They clean their blades again, then call Iexelcis and the cook inside. The four load up on swords, spears, and crossbows.

Poor Severin has expired from his wounds, and the manner of his demise troubles Lycinia. She and Gerdie bring his body into the master-at-arms' former office, and put him on her desk. They make an ersatz pyre with blankets, tabards, papers, and random bits of furniture, douse the whole with as much lamp oil as they can find, and set it alight before running back out into the snow. 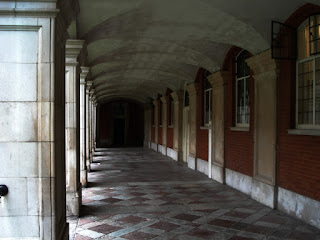 They return to the great hall laden with armaments. Manfred demands to examine everything they have brought, and distribute it as he sees fit. Lycinia tells him that she has no objections, but she did personally select a rapier for Emmeline, whom she has taught how to fight. "If we live through this," says Manfred, "you must tell me what you did to convince her to learn swordplay. I've been trying to get Margiste to learn for years!"

Manfred is happy to have a task on which to focus. He does his best to drill the non-combatants with their new arms, and Gerdie sets up a firing range for the crossbows. Lycinia is left to study her spellbook in peace. Frère Ambrosius prays to the Light God to wash away Gerdie's pains [cure light wounds restores her to full hp] and then sits before the fire in quiet contemplation, that he be ready to work more miracles for the Glory of the One True Faith.

Everyone wonders why Severin didn't return, but no one wishes to hear what they know must be the answer.

The night passed much as did the one before, though the mood in the hall is somewhat better, now that they feel capable of defence. The strange storm continues outside, and no one has quite gotten used to the thunder and lightning accompanying the snow.

Lycinia pulls Manfred aside after breakfast. "Manfred," she says, "it's good that we're all ready for a fight here and everything, but I don't like just sitting and waiting. The... the thing you described in your father's chambers. I think we should have a look at it. See if there is any way we can defeat it..."

Manfred looks stunned by her request, and begins tripping over his words [UNE: insane-confusion-relics]. "No... we can't-- it's so awful! Mustn't go upstairs... the foulness... we need a weapon against the foulness. The relic! We must have the relic! Yes, that's the only weapon for this..."

[Q: Does this mean anything to the confessor? Very Unlikely: 68, Yes.]

Frère Ambrosius overhears Manfred's ravings, and strides over. "Manfred, you're under a lot of strain, and have overtaxed yourself again. I think you'd ought to get some real rest. I know you stood watch twice last night. That's no way to keep in fighting trim, my dear lad. But you may have a wise idea. The family has a a relic of St Lisaveta in the chapel. It could be of some use to us in this most desperate hour."

Lycinia wastes no time in convincing Gerdie and Iexelcis to make sortie with her to retrieve it. As they are setting out, Manfred calls after them [UNE: insane-accident-recent scene]. "I should never have gone up there. Never! Promise me you won't go up there. It... it's too horrible." 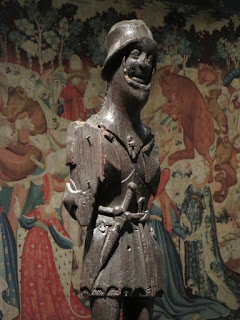