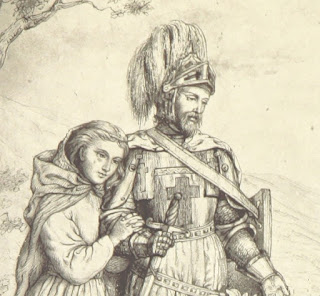 
After Ysmena's revelation, it is felt that it would be unwise to tarry in Dunning's Green, so the three set out to the south forthwith. Once safely away, Ysmena pauses to use her wizardry, a restorative invocation to ease her overtaxed lungs [Lesser Healing restores the Health Point lost to smoke inhalation].

Loys and Ysmena converse pleasantly enough on the journey, whilst Reynaud trails behind in splenetic silence.

Sadly, Ysmena has nothing of moment to relate, and is at present unwilling to expound upon the circumstances which led to her near-execution. She tells Loys only that she had been sent to Dunning's Green to retrieve a grimoire in the possession of a certain lady living there living the life of an oblate. Ysmena fears it was she who tried to have her killed, for she had done nothing to arouse the suspicions of Mayor Bricot nor the ire of the redoubtable Fr. Jolyon. 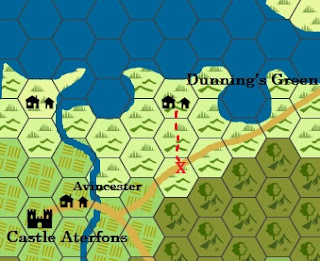 [I rolled on the Road Encounter table in the d30 Sandbox Companion, and got a 30: Ambush. It seemed most logical to occur in the hills hex, right where the PCs come upon the road. Table REAG: Attacking Group indicated 2 attackers, at the same Rank as the PCs (whose average rank is 1.67, thus 2). In point of fact I think the Road encounter table produces too many random combats, but as I'm still learning the DW system I don't mind; Now we get 3-vs-2 with magic & missiles involved.

I checked for magic according to the NPC Weapons & Equipment Table (DW p.133), and it transpires that B had a Potion of Night Vision. Using my potions tables, I determined that the flask is unlabelled (there was only a 1-in-6 chance), and that B knows the nature of the potion therein (he needed to roll 6+, and as he is in the wilderness got to make the roll on 1d10). As these are down-on-their-luck knights turned bandits, I picked weapons at random and gave them each armour with AF 1d6.

As he and his companions crest a hill, they finally seed the road below them. On the other side of the road, in a copse of trees, Loys espies a pair of figures. "Ho, there!" he calls out. "Well met!" But there is no reply. The party advance, but cautiously. Loys and Reynaud take up their shields, and put their hands on the hilts of their swords, but do not draw. Ysmena does take the dirk from her belt.

The two figures come forth from the shade of the copse. One wears plate armour and brandishes a sword. The other is clad in a mail hauberk, and advances with crossbow at the ready. The two parties stop a short distance from the road on either side [15m apart]. The man with the crossbow shouts, "Throw all your money and jewels down on the ground, and we shall let you pass. Else ye shall not live to see the morrow."

Loys and Reynaud draw their blades in answer.

[Initiative is in order of REF, so: Ysmena, B, Reynaud, Loys, A]

[round 1]
The three knights in plate charge, their various battle cries issuing from their lips ("Munjoie !", "Albion!", "Gaaaaaaah!").

The brigand with the crossbow raises it and takes careful aim at the charging Loys, as Ysmena speaks a short incantation. As the crossbow bolt is loosed, a lance of fires springs forth from the sorceress' fingers, enveloping the brigand and burning him severely. His bolt slams into Loys' breastplate right in the centre, but is deflected by the thick, curved steel. The brunt brigand ducks back behind a tree, out of sight of the sorceress.

[Initiative, schmintitiative... sometimes it makes more sense to tell it out of order. But for the game mechanics...
Ysmena's Dragonbreath spell has a Speed of 12. B's Evasion is 5, so the spell hits on (12-5=) 7 or less on 2d10; she rolled a 3. Damage is 1d6+6 - the Armour Factor (3) of his hauberk.1d6+3= 6 damage total, leaving him at 4hp.
B's shot has a +2 penalty for Loys' movement, but missiles aren't affected by Defence. So 1d20+2=6, well less than B's Attack score. The d6 thrown for Loys' shield did not come up 1, so it didn't stop the shot. Crossbows get a d10 for their Armour Bypass Roll; a 3 fails to penetrate Loys' plate armour.
Then the knights all moved, but as they went more than 2.5m they could not attack this round.]

[Round 2]
Ysmena wants to throw another spell, but now her companions are in the way. She trots a bit forward and to the left, so she can get a clear line-of-sight. The brigand she had just scorched is behind the tree still, swapping his crossbow for a battleaxe.

Reynaud and Loys are locked in combat with the other brigand [who must split his 9 Defence: 5 toward Loys, 4 towards Reynaud]. Despite the advantage, Reynaud finds his every swing deftly parried by the brigand's sword [19 misses]. But as he counters one knight's assault, he leaves himself open to the other's. Loys waits for an opening, then stabs under his arm as he is raising his sword to fend off yet another furious blow [rolled a natural 1, so automatically bypasses armour. 4 damage drops A to 5hp]. The brigand shouts in pain and surprise, and reels back, weakly counterattacking the honourless cur that just wounded him [rolls an 18, missing]. His sword barely finds the other knight's blade.

[Round 3]
Ysmena can only see the one enemy knight engaged with her companions. Not willing to risk burning either of them by mistake (though in truth she feels they both somewhat deserve it -- but now is not the time to dwell on past injuries), she tries a different spell, chanting the curse that bids the very strength of the brigand desert his limbs [she casts Weaken on A; His Magical Defence (4) is subtracted from her Magical Attack (17); the spell thus works on 13 or less. 2d10= 7, success. He suffers -2 Attack and inflicts -1 damage]. A heaviness grips the brigand's heart, and his sword arm seems to droop.

His companion rushes out to join the fray, battleaxe in hand [move only]. He engages with Reynaud, who lunges straight for him [Att 13 - def 10=3 or less to hit, but as luck would have it he rolls a 3. d8 for his ABR = 4 vs AF3]. The blade find a weak spot in the man's mail, sundering the ill-kept links and running him clean through [4 damage drops him to 0hp]. Reynaud pulls back the gory blade as the brigand collapses at his feet.

Loys and the other brigand are now fighting one-on-one, but neither is able to pierce  his foe's defences. 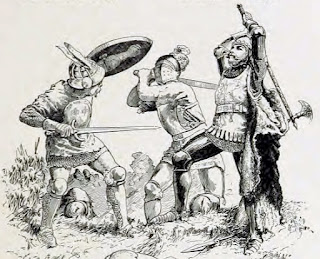 [Round 4]
Ysmena stands and watches the fight. She will, she thinks, conserve what little magic yet remains to her [1 Magic Point] until there be great need.

Reynaud assails the brigand again, but in vain, finding every thrust knocked aside, every swing met with unyielding steel. Perhaps their styles are too similar, for the  man seems to always know what he is about to do [or perhaps Reynaud's best roll against him this combat is a 17].

Loys once again finds an opening whilst the other two face off, but this time his blade clatters off the brigand's vambrace [he hits, but the ABR is 6, which I had to look up -- the Armour Bypass Roll needs to exceed the AF (which is why AF of 1 isn't useless, now that I think of it). But as the brigand is wounded and alone against two knights and a sorceress, I decided to ask Mythic--

The brigand backpedals, then casts his sword to the ground. "I surrender!" he cries.

Reynaud pauses to see what his master will do. Loys removes his helm, and walks boldly over to the cowering brigand. "You may have no honour," says he, "but fortunately I do. I accept your surrender."

He commands the man to move the body of his fellow out of the road. Ysmena takes up the crossbow and sword, Reynaud takes the battle axe. Loys and Reynaud strip the fallen knight of all his valuables: 59 florins and a small bronze flask, which their prisoner duly informs them is a 'potion of night-seeing'. Loys asks for Ysmena's confirmation, but she admits her ignorance; the Ars Chymica is yet beyond her meagre understanding of the arcane mysteries. 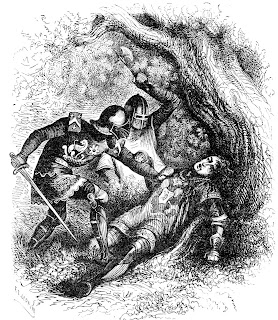 Soon they are marching up the road towards well-tilled fields, their prisoner in the lead.

[Since they were desperate bandits, I had halved their total cash (2d100F total instead of each).

B was at 0HP, so he was actually still alive, with a 1-in-6 chance to wake up each minute. I assumed it would take the party 10 minutes to get their loot and be underway. I rolled 10d6 and got no 1s (this never happens, I assure you); the 14th d6 saw him wake, so B will be added to the NPC list as he may one day be back for revenge. And finally--

Q: Does the prisoner do anything foolish? Unlikely: No.]

As they walk, Loys bethinks to interrogate the prisoner to learn his worth.

"And how be it that you fell into this despicable state?"

"Benoist and I were serving in the king's army, only... I should never have listened to him in the first place. We were going to be sent over the Crusade, willing or not. But I couldn't go. I couldn't be away during the harvest."

"Ah, I see," says Loys, who can practically taste the gold of the man's ransom, "so you did not wish to leave the running of your estate in the hands of your steward?"

"My steward? No, milord, you misunderstand my meaning. I am but a simple farmer, and I must till the land of my lord, lest I be found wanting in my duty... though it's too late for that now."

"I was made a knight in the field, milord, when we did war against the Duc de Roncevaulx in Chaubrette. So many of our nobles were lost, and we were picked by lot--"

"But... the device on your sword. The crest chiseled upon your breastplate--"

"--belonged to the man I replaced. The choler ravaged our camp. There were so many dead, we had to bury them in pits altogether, masters with serfs co-mingled. This armour was given me, as I was of the same build as Sir Gaufridus, rest his soul."

"Enough! I've heard enough! Be silent lest I administer the Kings's justice on you this instant, brigand!" 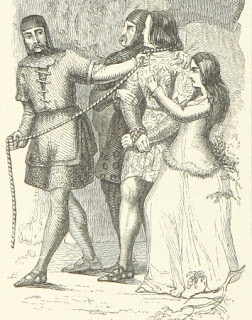