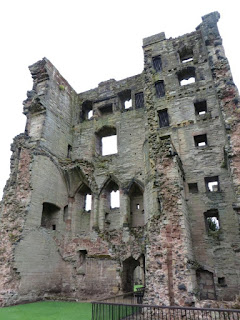 Switching gears again... A post by Moonsylver in the Lone Wolf Roleplaying group got me thinking about a sandbox game I started up a while ago and never got around to posting. It's caught my interest again, so here goes:

In c.30 years of gaming I have never owned a pad of hex paper. Wilderness maps were either sketched on anything I had to hand, or put on regular graph paper, which worked well enough. Honestly, most overland adventures used either the World of Greyhawk maps or something borrowed from a published module -- if they used a map at all. My best ever solitaire wilderness sandbox was on regular graph paper, all mapped out in advance; I should probably see if I still have it to mine for ideas. A friend once did give me a couple sheets of hex paper. One of them was wasted in drawing a series of caverns that I never used for anything, and the other lay fallow for many a year until I finally found something to do with it. At some point I decided I wanted to play a game about knights and castles, chivalry and the high (fantasy-) middle ages -- indeed, just like the guys on the cover of the WOG box set. The PCs were a group of knights (4th-7th level cavaliers and paladins) and their attendant cleric. I put a town at the bottom of the map for the starting point, and dotted castles around the rest of the page. The adventure was handled with the random wilderness tables in the back of the DMG, each hex's terrain being revealed only as it was explored by the brave knights on their holy quest to do deeds of valour in exchange for experience points. The Lords and Ladies ruling each castle were fleshed out with the NPC personality tables, and given alliances and rivalries, and had the adventure continued there would have eventually been armies from rival castles taking the field under the Battlesystem rules. It was all great fun for a while, but in the end I abandoned it in favour of getting back to the exploits of my elven magic-user, or possibly Star Frontiers.

I did always intend to get back to it some day, but it never happened. It wasn't quite the fairytale adventure I wanted, and the random terrain made it a bit too far-fetched; the castles were never anywhere really sensible and seemed to exist without any need for peasants to till the land. The game probably would have worked better for Pendragon or Chivalry & Sorcery, or with rules from the D&D Companion set, but I didn't have any of those. I started thinking about it again recently when I came across some blog posts about sandboxes and hexcrawls. I was also trying to think about where to go after finishing my latest series of dungeon escapades; fun as they are, I was starting to suffer from writing-about-combat fatigue again.

I mentioned the medieval kick I'd been on somewhere in one of the LotFP dungeon write-ups. Since then, I went visiting in the Midlands and got to go explore an actual castle, which is in fact what reminded me of the old knights & castles hex adventure in all its glory -- and in all its inaccuracies. Not only was the castle was right by the town, but the subterranean passages weren't even close to 10' wide. The cellars of the 18th century manor house we saw that weekend were much more classically dungeon-sized, if somewhat linear and frequently open to the outside. 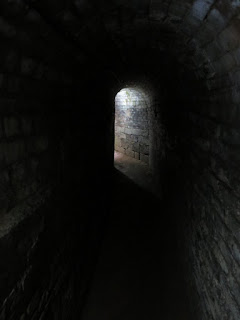 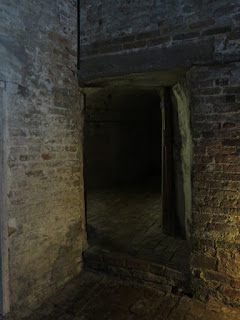 Added to all this, I recently discovered the Dragon Warriors RPG. Growing up I'd never heard of it, and to be honest, the name probably would have put me off. But when I looked into it the setting really spoke to me in a way that few fantasy games ever had. Briefly, it has both the feel of the actual middle ages and the wonder of proper old fairytales that I was always looking for. The DW setting and ethos are definitely similar to the way I had been setting up my LotFP campaign, only without the baggage of certain D&Disms.

So, how did I set up the sandbox? I like the basic DW setting, so I am using it for the broad strokes of the world. I am starting with the standard campaign setting of Albion (fantasy England) and I found a big blank space on the world map in which to place my hexcrawl. It corresponds roughly to Yorkshire, which is a good model for the setting I want (i.e. lots of spooky moors to get lost in). I'm using 1-mile hexes, so a 60x80 hexmap (4800 square miles) is about 2/3 the size of actual Yorkshire, and doesn't run over into other parts of the world map.

I've got Hexographer instead of paper, which drastically speeds up the process of map making. The basic random terrain distribution is a bit bizarre though, so I changed it to suit the climate of the region in the Custom Terrain settings. I didn't like the first map it generated at all, but the second one was usable. It still needed a lot of work to clean up (by which I mean it took one whole evening).

First I added the coast, and drew rough lines down it and around the lakes so it looked more like real terrain. I still wasn't happy with the amount of moorland, so I increased that, and even put in a bit of broken lands way out on the western side of the map for the site of some magical disaster or other.

Had I been working on paper, I would have added in rivers next, but with the Add Random Features tool in Hexographer, it makes more sense to see where the settlements are and use those as a guide to laying down the rivers. Since I'm going for verisimilitude, I did a bit of looking online and found, quite handily, a population-density map of Yorkshire based on the Domesday Book. I knew my LotFP map was woefully underpopulated, but even this admission now seems like comic understatement. DW divides settlements into Castles, Towns, and Villages. So, to get a reasonable amount of starting settlements, I first ran the tool with just the Village icon, and bumped up the density from the base .5% to 2%. After that, I put the density back to normal and ran the tool again, placing castles, forts, churches, ruins, &c.

Then I went through the whole map and made sense of it all. Villages were added in big, empty areas of cultivated land, removed from swamps, etc. Castles were moved near villages and vice versa. I added a lot of settlements and fortifications on the coast. And I added a single city icon to represent the largest settlement, where the Earl holds his court. I'm calling it Ebrac, as it is obviously pretend-York (Latin Eboracum).

Once I was satisfied with all that I added rivers, and made sure that all settlements had some sort of believable water supply. I also connected a lot of the settlements by roads, which would have been built in the days when the island was a province of the Selentine (faux-Roman) empire. I made sure to include lots of crossroads so there is somewhere to display the bodies of criminals hanging in gibbets. 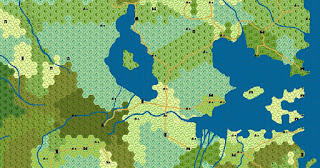 fig. 3 - This is just part of the map, and at half size.
Ebrac is on the river, south of the crossroads near the centre.

And that was sort of it. Other than the one city, I will be putting off naming things until it becomes necessary. NPCs, factions, and everything else will come out in play. 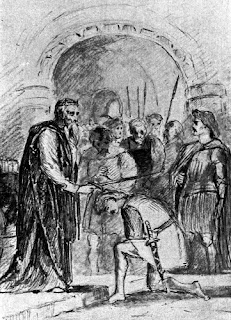