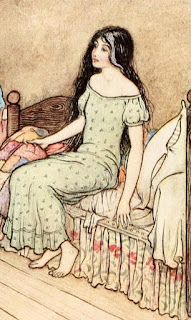 Travjane wakes up in her little garret room and rubs the sleep from her eyes. She sits on the edge of her bed, trying to remember the dream she just rose out of -- something about shadows on the moon, or were those her friends from the Cloister? -- but in the end it all fades into the foam of her morning confusion. She strains to listen, and she thinks she can hear movement down in the shop below, so she stumbles down the stairs to see who's awake.

Darian is at the kitchen table making notes in a ledger. His apprentice is in the kitchen, and Travjane can smell something cooking, or rather being burnt. Travjane plops down in a chair at the table. "Blessings of Travia be upon you," says Darian cheerfully. The witch merely yawns in reply. "Rough night?" asks the half-elf.

"It's the day before we put your plan into action."

"No, I mean, what day is it today? What's the date? I've totally lost track of time since I left Hohendorf. Did I mention I'm from Hohendorf? Don't hold it against me."

"I wouldn't dream of it, dear. We can't all come from the great city of Gareth."

"Is that where you're from? How'd you end up here?"

"Exactly. But to answer your question, it's the 10th of Hesinde. Fireday."

[The date would be written as Feuertag, 10. Hesinde 1040 BF. The 12-God Calender is the most popular, but by no means only method of tracking time. There's 12 months of 30 days each, with 5 unlucky 'Nameless days' at the end of the year. The year starts in the month of Praios (=July). Hesinde is the goddess of knowledge and magic; her month corresponds to December. There are four seasons, like on Earth (and bearing the same names). Hesinde is the last month of astronomical autumn, but it the first meteorological month of winter in middle Aventuria.

I've been exceptionally lazy about the weather since she made it to Weihenhorst, since shelter hasn't been an issue. I was just using historic weather data from Dortmund when she was travelling in the wilderness.

Setup: time to see the show

Wassertag, 11. Hesinde 1040 BF
The day of the performance, the skies open up and drench Weihenhorst with rain. She does little else but stare out the window, wondering if the players will be forced to cancel, and the plan be delayed. But by evening the storm has abated.

As evening is falling, Travjane and Darian eat a very quick dinner (prepared by Darian's long-suffering apprentice) and then set to the task of dressing for the evening out. For a trip to theatre -- even this merely provincial theatre -- requires some sartorial forethought. Travjane is more than content to just throw on her new dress and heavy winter cloak, but the tailor spends nearly a full hour just agonising over which hat goes with which waistcoat. At first Travjane finds it a fun game, but as night settles over the city she becomes impatient and threatens him with dire witchcraft if he doesn't hurry up. Nor witch nor half-elf is even sure that she's only joking... 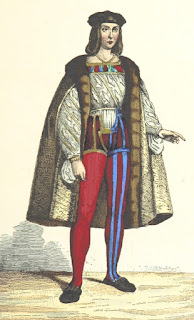 At long last Darian and Travjane set out into the quarter. The night air is chill and damp, and very few others have ventured out into it. They are nearly run down by a horsed warrior going at full gallop down one of the near-empty streets [random encounter], and Darian has to bodily restrain the witch from giving chase and cursing the careless rider.

The streets become more lively as they near the theatre, and when they have paid for entrance, they are met inside by the sight of a thick and jubilant crowd.

"I knew this would happen!" says Travjane. "I told you to hurry so we could get a place up by the stage."

"My dear Travjane," replies Darian, "we are counting on the crowd to keep Kamillio from seeing us together and getting suspicious. And besides, this isn't some group of travelling mummers in a village square. We're the city's own playhouse. Remind me to explain to you the concept of 'fashionably late'."

"Save it for another time. Do you see Kamillio in the crowd?"

"Well, then, maybe I can get an early start on this. If I can't make it back to you, we'll meet at the Rose & Sceptre."

But the witch does not hear him, as she is already fighting her way through the crowd. 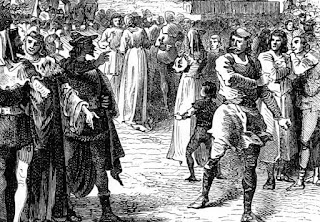 [She needs to make a Body Control (Agility/Agility/Constitution, skill 4) to manoeuvre through crowd to Kamillio: 11/10/6 succeeds.]

Travjane fights her way through the throng and gets right behind Kamillio. She summons the power of her witchcraft, whispering an enchantment under her breath. She feels the magic swell within her, and then pushes right past Darian's rival, making sure the fancy dagger at her belt is pressed uncomfortably into his back for a second or two. She doesn't stop, but continues her way through the densely-packed audience. 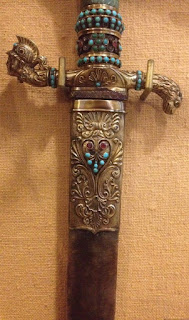 [Some die rolls are in order.

First, she cast the witch spell Große Gier (great avarice/lust). It uses Courage/Intuition/Charisma, she has Skill 5, and it takes the target's Mental Strength (1) as a penalty. Rolling 7/5/8 is a success at QL2. She spends 8AsP (she was back to full strength by now), and fortunately rolls higher than 8 on a d20 so the Mindergeister do not appear. The spell will last (QLx15 mins.) half an hour, during which the target gains the Disadvantage 'Lust for X', X in this case being the fancy dagger.

Kamillio is entitled to a Willpower roll to resit temptation. He's got the same stats as Darian, so Courage/Intuition/Charisma of 12/13/12 and skill 2. He rolls 7/11/20, a failure, and for the duration of the spell will try anything short of putting himself in physical danger to get the object of his desire.

But it is disappearing into the crowd! Travjane needs another Body Control roll to get away through the mass of bodies: rolling 14/5/19 fails.

The UNE rolls were totally random. Normally I'd re-roll a 'loved' result from a stranger, but Travjane does rather turn heads.] 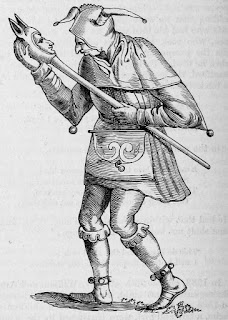 Travjane finds the crowd in this part of the theatre is more impassable than walls of the city itself, which once did hold back the orcish hordes. She feels a hand on her arm, and turns to see Kamillio staring at her with an unreadable expression.

"Oh my dear," says Kamillio,  "your loveliness is matched only by that exquisite stiletto you wear at your belt. May I examine it?"

"I could never bare this blade in public," replies Travjane.

"Oh, dear lady, I meant no offence to your honour. It's just I'm a very great collector, you see."

"Oh! I see. But the show is about to start, and I'm neglecting my companion. Perhaps we might meet afterwards...?"

"Of course! After a show I'm always to be found at the Rose and Sceptre."

"But however shall I wait that long?"

Fighting one's way out to the entrance is much easier than moving further in; the spectators are all too eager to let them pass and advance into their place. Finally they find an uncrowded place near the entrance.

"Can I see?" asks the greedy Kamillio.

"Please, I just must have it! I must! Name your price."

"It was a gift. An expensive one. And to me, it's priceless. What could you possibly offer against sentiment? Money? hardly! Jewels? I think not. Magic? n-- well, perhaps. But it would have to be unique."

"Perhaps," says the tailor thoughtfully, "I might have an idea of a suitable trade..."

"I have a magic needle. No one else possesses such a rare item."

"It's kept safely in my shop."

"Take me there then."

[With all the crowd manoeuvring, (1d6+9=) 12 minutes have elapsed. The trip to the shop will take (2d6x5=) 20 minutes. Travjane is very sweet and alluring to distract him in between castings. Seduction roll (Courage/Charisma/Charisma, skill 2, +2 bonus for good-looking advantage) 17/9/5... just succeeds.]

Spurred on by desire (and perhaps the cold and damp), Kamillio leads Travjane briskly through the streets to his shop. They pass a patrol of the watch, but the sensible citizens of Weihenhorst are not abroad on such a night. Travjane is sweet and charming, and Kamillio nearly forgets the purpose of their journey from the natural magic of the witch's smiles.

When they reach his shop, he unlocks the door, and pauses to light a lamp inside. Travjane makes a show of removing the dagger in its scabbard from her belt. She nearly hands it over to him, then at the last moment pulls it away, stopping his greedy, outstretched hands with her own. "Not yet," she whispers, "if you want to take your prize, you must first go fetch me the trade." The touch and the simple words are enough to effect the potent charm.

[She made a successful casting check, he failed his Willpower roll. No Mindergeister appeared. Now, how does this go down?

"Yes," says Kamillio, "yes of course. I keep it in my hidden strongbox upstairs. Here, come wait by the counter. I keep spare candles beneath. I can't, of course, have you accompany me up to the strongbox, and I need the lantern to light my way. But I won't have you sitting down here in the dark."

Kamillio ducks behind the counter and begins rummaging around. He stands up triumphantly, a pair of tapers in hand. "Here, help me get these lit."

Travjane does as she is bidden, and walks up before the counter. Kamillio's smile turns suddenly into a malicious leer, and he stamps his foot down on a hidden pedal. The floor beneath Travjane's feet swings open and she tumbles down into a pit. 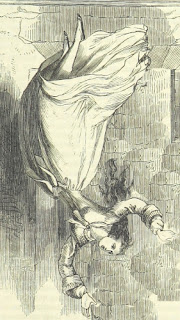 [She gets a Body Control check to reduce damage 9/15/4, using one skill point makes the roll a success; the remaining 3 skill points reduce the damage, which is 1d6/metre. Assuming a standard 10' pit, 3d6-3=12 damage. She's down to 17LP, and suffers 1 level of Pain.]

Travjane falls hard onto the dirt floor of pit, and screams out a few choice expletives once the shock has worn off, and the pain begins to throb. At least she hasn't broken anything.

Kamillio peers down at her. The lantern light glints off the smooth, wooden panels lining the pit walls. "If you want out of there, you'll have to hand up the dagger first!"

Travjane struggles to her feet. Climbing out of the pit on her own is an impossibility, as both she and the leering tailor both can see. But he didn't count on  trying to catch a toad-witch. She plants her feet firmly beneath her, mumbles a low incantation, and then jumps.

[casting Krötensprunge (Toad's leap): Cunning/Intuition/Constitution, skill 6. She's in no hurry so the 2 actions (about 10 seconds) casting time is fine, but she has -1 from Pain. Rolling 2/9/14 succeeds at QL1. 3+QL=4m jump. It costs 2AsP, and the Mindergeister do not appear.]

She leaps right up out of the pit and onto the solid floor. Drawing the dagger from its scabbard, she hisses at the astonished tailor, "Come near me and you can pick this dagger out of your own chest!"

Kamillio does not doubt the truth of her words. He retreats back behind the counter. Travjane wheels round and flees out into the night. 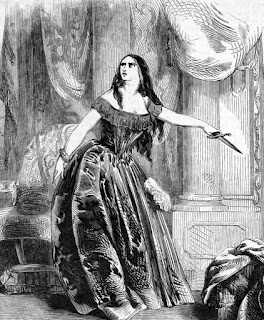