Into the Odd solo - Part I : Into the Deep Country 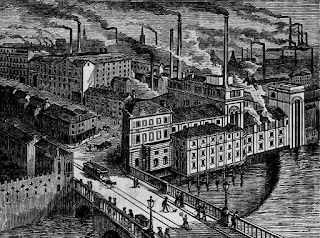 Three there were, unlikely heroes of an unlikely tale. Circumstances unspeakable had driven each of them out of great Bastion, last haven of humanity, to this forsaken city on the edge of the Deep Country.

And they were desperate, too; not a one had a penny to their purse. And this desperation had driven them further still, so that now, on this unhallowed night, they had come together at the behest of a most shadowy figure -- one whose name I dare not whisper to you, for his spies are everywhere -- and they had agreed to venture across the lands of terror at his behest, to undertake, as he would have it, a small errand. 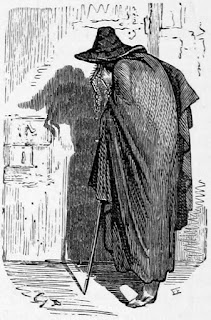 Readily did they agree, for what alternative was there? Their employer's servant handed over a letter in a thick, grey envelope, tied up with a single golden thread -- or was that a hair? -- and sealed with black wax. The letter was addressed in a fine calligraphic hand:

"Deliver it, and you shall be rewarded. Fail me, and I shall know. Now be off." And then they were shown the door.

Out into the streets they went, into the choking coal smoke, and proceeded wordlessly towards the north, for there was nothing to say. They all knew of Morve by its foul reputation; it was said that monsters there walk abroad in the streets, and none but the mad dare call it home. Perhaps this letter they held were little more than their death warrant, but it was too late to reconsider. Out, out of the city they plodded, as they plotted their course into the Unknown.

"Let us head due north across the plain," says Aldous. "Perhaps we can find a village on the coast where we might charter a boat across the sea."

"With what money?" asks Threnody. "Or were you hoping to rely upon charity?"

"We shall attend to that when we have found a village," replies Aldous, "although I am sure our circumstances will have favourably altered by that time... somehow."

The intrepid explorers approach the plume of smoke warily. It soon resolves into the sight of four worshippers round a small, stone altar, upon which the offering to the gods yet blazes.

"Kνίση δ᾽ οὐρανὸν ἷκεν ἑλισσομένη περὶ καπνῷ," quoth Murt. ["And the savour went up to heaven curling round in the smoke" Iliad 1.317]

"Murt!" exclaims Aldous, "I never knew you had it in you."

Despite Aldous' natural leadership qualities, and Murt's surprising hidden depths, it is felt that Threnody would have the best chance of negotiating with the communicants. Perhaps she might even secure an invitation to the sacrificial feast that is sure to follow. 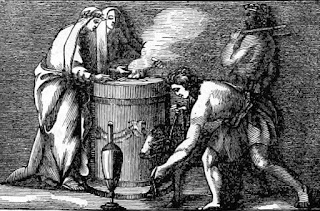 [Threnody gets to make a Willpower save to parley with the cultists:
1d20=16, failure]

"Good day to you," begins Threnody. The cultists look up from their ritual in surprise.

"Look what we have here!" says the lead cultist, "These'll make much finer victims for hundred-headed Typhoeus!"

The cultists all draw their weapons at these words, and the explorers do the same. The battle is very short and very fierce. In no time at all, Threnody lies senseless in the long grass, and Aldous is bleeding from a deep wound. Two cultists lie unconscious near them, and the other two have fled.

Murt dashes out the brains of the two injured cultists with his mighty axe whilst Aldous tends to their injured companion. She is soon roused, but the three of them are in such a sorry state that they fear to press on any further.

They return to the City in disgrace. 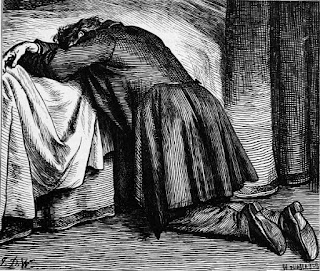 [They need a Long Rest (about a week) to recover their lost Strength. To pass the time more pleasantly, let us review the circumstances of their battle in greater detail.

When it isn't obvious, the leader of the PCs must pass a DEX save to win the initiative. I had declared Aldous the leader because of his military background, but in retrospect Threnody should lead as she has the best Dex. An academic distinction, as 1d20=3, so any of the PCs would have won it for their side.

Each PC had to fight at least one cultist. The extra one attacked (1d3=) Threnody.

[round 1]
Threnody bashes Anne with her club for (1d6=) 4 damage. 2 points reduce her HP to 0, the other two come off her Strength, dropping it to 8. She needs to make a STR save to avoid Critical Damage, but rolls a 16; Anne falls unconscious.

Aldous hits Horace with his club; 3 damage drops him to 0hp, but there is no further effect. 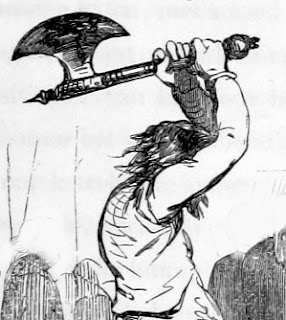 Murt swings his long axe at Matthew, inflicting a punishing (1d8=)8 damage. Matthew has 1hp, so 7 points come off his Strength, putting him at 6. He fails his save against critical damage, and is hors de combat.

Mary comes after Threnody, bludgeoning her for 5 damage. Her Hit Points absorb 3, and the other 2 points come off her Strength, putting it at 6. Her STR save roll is 15; she is overcome by her wounds.

Horace swings his axe at Aldous, delivering a nasty hit. 6 damage takes out his 1hp and reduces his STR to 6. But Aldous saves against critical damage (just; 1d20=6), so keeps fighting.

The cultists, having lost half their number, must check Morale. Their leader (Mary) needs to make a Willpower save; 1d20=19, failure. Mary and Horace run screaming from the scene, leaving their companions behind.]

"Let us head due north across the plain again," says Aldous. "Perhaps this time we shall reach the coast."

"We still haven't any money," says Threnody. "I'm surprised we were even allowed back into our lodgings."

"Our benefactor has been kind to us. Let us not disappoint him in this our mission."

They march north across the grassy plain for some time, but there are no signs of life. It is as if they are alone in the world. To the east rises the vast mushroom forest, a place in which they'd rather not get lost.

[No encounters/features for 4 hexes, but in the 5th a feature was indicated: a Henge. I rolled up a random cult with the d30 Sandbox Companion to populate it--

"The Order of Liberation"
worship: rakshasa
goal: corruption, everyone
strange practises: carrying of bugs in pockets or pouches] 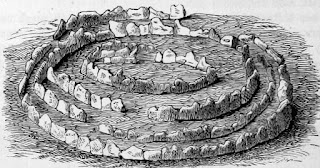 As the daylight is beginning to fade, a stone circle is spotted in the distance. Scarlet-robed worshippers wander here and there amongst the sarsens. The explorers pause to watch them, fearing another encounter like the last. But besides some ecstatic dancing and droning hymns, there is nothing untoward about their worship. The cult offerings are but libations of wine and barley cakes placed upon the central stone.

"I believe we'll be safe here to-night," says Threnody. And in fact, she is right. For though the cultists may look at one with unnatural intensity, and invite them to participate in rather outré acts, they shew but little disappointment when they are refused. Their hospitality, in fact, rather recommends them to the weary traveller.

The explorers are given use of a small hut on the outskirts of the circle. They spend a restful night there -- putting the bad dreams down to the weariness of the road --, and set out in the morning with the high priest's blessing.

They walk but a short way over the plain before coming to a settlement nestled between craggy mountains and the foetid swamp. Frumpley's Coombe (population 49) is a small hamlet, a cluster of depressing and decaying wooden hovels peopled by a degenerate group of sheep herders. They do not take kindly to outsiders; perhaps they have had enough of the wicked cultists stealing from their herds. Though they do seem to take a hypocritical delight in relieving visitors of their own things.

Our heroes pass through the centre of town as quickly as possible. Threnody's watchful eye scares off the would-be thieves. A drunk tries to pick a fight with Aldous, but he stays just outside the man's grasp until they can be safely away. The sullen villagers watch them depart in slack-jawed silence.

Threnody needed a Willpower save to avoid thieves; 1d20=7, ok 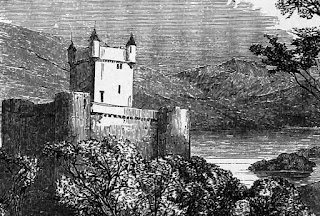 Leaving the horrid little village behind, our explorers are soon rewarded with the sight of a great castle looming on the horizon -- a sure sign of civilisation. Beyond the castle stretches the wide roaring sea. Perhaps here they can begin to look for passage in earnest.

There is movement between them and the castle. Five horsemen ride towards them at a full gallop, reigning their flashing-eyed warhorses suddenly to a stop. The riders are wearing colourful livery over old-fashioned steel armour. Their helms are topped with tall, waving plumes, and their spears all bear long silken banners. The leader wears a brace of pistols.

"Who goes there?" he shouts.

"We're travellers from Bastion," states Aldous. "We bear a message for across the sea -- we must find passage to Morve. Perh--"

"Recreants! Heretics! Apostates! None but the wicked have any dealings in that accursed place!"

"Please, sir, we shall not intrude on your lands. Let us be on our way and--"

"You shall not pass!"

At this, five lances are lowered in the explorers' direction. They turn and hurry away, and are relieved to find that the Priestess' soldiers do not wish to pursue.

There is now now easy way to the shore. The explorers have no choice but to set out through the insalubrious swamp. They strike out to the south, but almost immediately are presented with another obstacle. A great volcanic vent yawns open, spewing noxious fumes so thick the far side of the crater cannot be seen. Passing round it seems an unwise course, so our explorers skirt the edge of the swamp, avoiding the Priestess' lands as best they might. They emerge from the swamp near Frumpley's Coombe, and rush past the village without stopping. Soon they have returned to the safety of the stone circle and the friendly cultists. 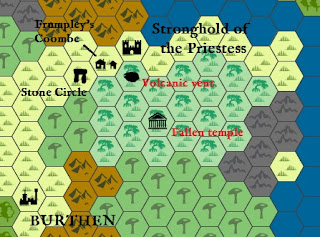 [d30 terrain feature: volcanic vent
STR roll required to pass through hex. Failing means the character is overcome by vapours, and will die if left in area. A conscious character can only carry one other.

Threnody needed to make a Willpower save to lead them back to the hamlet rather than the stronghold; d20=2, ok.

On the third visit to the Order of Liberation, PCs will need to start making Willpower saves to avoid the cult's corrupting influence. Some sort of d6 madness/mutation table will be made at this point.] 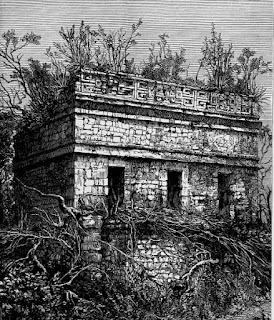 The explorers set out south eastward into the swamp. It's a long, slow slog, and they are beginning to despair of finding shelter by evening when they happen upon a fallen temple.

[d30 Ruins tables produced a severely damaged temple
inhabitants: nuisance
The encounter roll for overnight came up a 1, so I grabbed a random picture for the encounter]

The temple is little more than a broken foundation being choked by vines and sinking into the mire. It would appear to offer little shelter from the omnipresent clouds of mosquitoes, but at least the leeches cannot get to one here.

But wait! Under a loose flagstone lies a deep, dark hole into a forgotten undertemple. Aldous lights a lantern, and lowers it down carefully on the end of a rope, to reveal a large chamber cut into the solid rock. This would seem to be an excellent shelter from the elements and the swamp pests, and perhaps it might even prove profitable to explore. The adventurers waste no time, but descend at once... 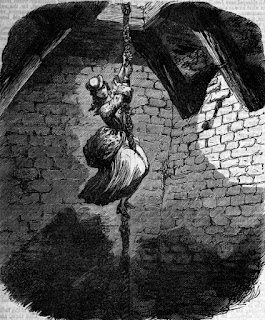