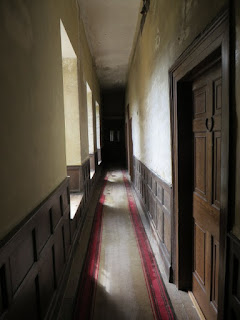 Setup: d6=4, Interrupt (was: follow ghost to get their equipment back)
Interrupt:  PC negative - doubt / Friend (see below)

Lalie and Éliane creep down a ladder into the blackness of a bare and dusty attic. When their eyes adjust to the their new surroundings, they find that their spectral guide is nowhere in sight. The pair slink forward to see a door at the foot of another stair opening, seemingly of its own accord. They follow down the steps, and out into a dark landing.

"Which way do we go?" whispers Éliane. "Now I really can't see."

As if in response, a door at end of the landing slowly opens.

A faint light comes from the room beyond. Lalie and Éliane make their way towards the feeble luminescence, moving as quietly as possible, though the floorboards creak and groan beneath their feet.

A shout comes from behind: "Get them!"

They turn instinctively at the sound, to see a man wearing a costly, brocaded doublet scuttling along the ceiling behind them on all fours.

[1d6=] Four servants are in the dimly lit room ahead. They all grab knives and rush onto the landing.

"You're surrounded!" says the man as he scurries down onto the floor. "Put down your weapons if you want to live!"

There seems no choice for our heroines but to comply.

[The man in the brocade is a magic-user. When I rolled the Doubt / Friend interrupt, it suddenly seemed obvious that the ghost was really an illusion. I rolled a random Magic-User of level 1d6+2, giving (d6=) him Phantasmal Force and rolling the rest of his spells randomly. He used Unseen Servant to open the doors, and Spider Climb to sneak down behind the PCs.]

The well-dressed mage has a pair of knife-wielding servants accompany him to march Éliane and Lalie down to the cellar of the manor house. He seems stylish and elegant in his expensive clothing and neatly-trimmed greying beard, but Lalie notes that his jewellery is very simple, and he wears no signet ring; he must be an underling to the manor's lord. But he does take a certain interest in the duo.

"You're the two with the rather interesting travelling chest," says the mage.

"I don't know what you mean," says Lalie.

"If you two are going to talk all wizardy," interjects Éliane, "then please just kill me now."

"My apologies, good lady. But I mean to say that you may be of more use to use than the rest of that rabble with whom you were travelling. But hold! what's that smell? No! It's got in the house! Take them! I give them to you! Leave me alone!"

A cloying smell of honeysuckle fills the air. Moments later, a terrible beast pads into the light. It is the size and general shape of a mastiff, with rotten, mangy skin hanging off its frame in festering tatters. In the places where its skin has fallen away, a steaming red chitin shows through, as if something alien and malign is growing beneath.

It regards the assemblage of trembling humans with empty, smouldering eye sockets, and launches itself at the nearest one. As the others look on in paralytic horror, the beast tears the unfortunate man apart with tooth and claw, then raises its bloody snout and emits a slow, sweetly-scented sigh.

[At some point I made a monster generator (on an automated Excel spreadsheet) combining the tables at the back of No Salvation for Witches with the powers table from the Summon Spell. So:

It had won the initiative. The PCs are next, followed by the NPCs.]

Without a moment's hesitation, Lalie, Éliane, and their captors all turn tail and flee. The terrific beast bounds after them.

Éliane easily out-distances the rest, running blindly through room after room. Lalie is not terribly far behind, followed by the knife-wielding chambermaid. The well-dressed wizard is a poor runner, and the beast catches up with him. None dare pause when they hear his sudden sharp scream, nor the sounds of rending flesh thereafter.

[8 damage brought the M-U to 3hp, but he failed his save against paralysis.

I rolled a random location on the Scarlet Heroes dungeon-habitation places table to see where their flight took the PCs; d20=great hall

In her panic Éliane runs straight past the front door and into the great hall. Lalie and the chambermaid follow close behind. Éliane skirts the long table and sideboards, throws open the first door she sees, and ducks inside. Lalie bursts in right after, then the chambermaid, who pulls the door quickly to.

Inside the small parlour is a small table with -- wonder of wonders! -- the little travelling chest and the rest of Éliane's and Lalie's possessions spread out over it.

[Initiative rolls were tied; the chambermaid has DEX 8]

Éliane [18 dex] grabs one of the pistols before the maid has time to react. Lalie [9 dex] follows suit a moment later. The two train their pistols on the young woman.

[She has a ML of 7, with a -2 penalty for the circumstances, but 2d6=5] The maid has a crazed look in her eye, whether it be terror or bravado or simple madness none can say. She rushes at Lalie, stabbing downward with her gleaming knife. The blade bites into her shoulder and she cries out in surprise [2 damage drops her to 4hp].

[Round 2]
Éliane hesitates, surprised at this turn of events. But Lalie doesn't waver, reacting before she even feels the pain of her wound. She presses her pistol into the centre of the maid's stomach and discharges it. The report is deafening in the small space. The ball erupts out of the maid's back in a shower of blood, flesh, and fragments of spine, and embeds itself in the heavy wooden door. The maid crumples [8 damage drops her to -3hp, mortally wounded].

"Shit!" cries Éliane, "Now everyone will know where we are!"

"Then grab our chest and lets away!"

They take up their things in haste. Éliane takes the little chest under her arm as Lalie throws her sword belt over her neck picks up the loose items in her skirt. Each has a pistol in their free hand.

When they rush back into the great hall, they are confronted by a group of three more servants armed with old-fashioned swords and a hunting crossbow. The servants seem nervous, and almost ignore the two women they are ostensibly here to recapture.

Then one lets out a shriek.

"That smell!" screams another. "The shot has summoned the monster!"

Éliane's nose begins to wrinkle at the cloying scent of honeysuckle, then the beast smashes through the doors into the hall.

They run into the next room off the great hall as the beast pounces upon the slowest servant. The sounds of terrified screaming and breaking bones are thankfully muffled when the heavy door is closed behind them.

The two remaining servants block the door with a heavy table whilst Lalie uses a chair to smash open a window. The casement gives way, and Lalie jumps right through, followed moments later by Éliane and the two servants. The servants disappear round the back of the manor as Éliane and Lalie sprint down the drive and away.

They walk the rest of the night down the forest road, insensible to the wind and rain. The storm lets up as dawn is breaking, and our heroines come upon a sleepy village. They make straight for the inn, exchange a few words and coins with the landlady, and march up to their rooms to sleep away the entire day.

All told, the adjusted Mythic event meaning tables worked well for me. They could probably stand a bit of editing still, but in the main I found that I spent a lot less time trying to make sense of the results in a way that fit the adventure, and I gave up on the results and re-rolled a lot less often too. On the success of this, I moved over to using the Monk charts for my main adventure as well. I wasn't expecting this to be a monster-movie adventure, but I don't think the tables are to blame. I honestly had no opinion about how the adventure should go other than see-what-happens.

My other historical game is running along much the same lines. To this end, I've devised a system for earning XP on a per-scene basis, based on the Chaos Factor table in my MCSV variations for Mythic. Each scene is now worth a set number of XP, divided equally amongst all PCs and NPCs in the party who were present. This replaces treasure XP. XP for defeating enemies is still calculated normally, especially since it will often be a matter of more than one scene (or even adventure) spent moving against a powerful enemy. I tend to run dungeons as single scenes, so those would provide XP normally. Very short scenes might not be counted for XP at all, though in longer adventures (44 scenes is my record, I think) this would all even out.

Based on this, Scenes 1 & 2 were Out of Control, divided between 8 N/PCs.
Scene 3 was also Out of Control, and the party was down to the 2 PCs. Scene 4 was just Philippe, so the PCs earned nothing thereby. Scenes 5-8 descended into Madness for the 2 PCs. So: