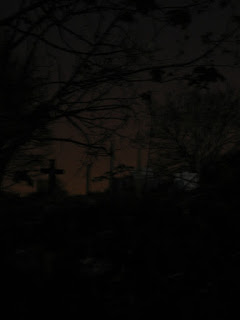 As it's October, I really wanted to get back to horror gaming. And earlier this year, I got to go to a handful of lectures whose common thread was magic and the occult in early modern Europe. The astute amongst you will already have gleaned that this means some Lamentations of the Flame Princess is in order. I could, of course, have taken up again the campaign I already have going, but the confluence of history and magic and horror has come together in yet another new project, or rather, the realisation of one of those ideas I've had rolling about in my head for years.

So I did the unthinkable, and started a campaign set in early modern Europe. I have a bit to say about historical gaming, but I will save that for another post.

Very recently in the Lone Wolf Roleplaying community, Alex Yari made a post about using converted word clouds generated from books to create themed solo gaming oracles. This struck a real chord with me, and I made two over the course of an evening (one silly, one serious), distilling novels into the Mythic event tables. So, naturally, I want to see one in action.

My historical campaign is well under way, but it might be December by the time I get it all written up. But, as it is also an LotFP game, I have been expecting heavy casualties (it's a bit of a slow burn; in ~15 scenes I've only lost 2/8 PCs). To that end, I created a secondary party of six PCs and their two 0-level hirelings, and ran them through The God that Crawls, with the intention of using the survivors to make up for character attrition. Three PCs made it out of the dungeon, but one was killed by the treasure afterwards. The two survivors both happened to be French, so it would make sense that they need to flee to the continent to avoid the English authorities. This seems a good set-up for an adventure to test my new oracle.

The adventure shall begin on a night both stormy and dark, as our heroines are taking a coach from Calais, bound for Amiens. I rolled up 6 quick NPCs to fill out the "party". The coachman was 0-level by default, the rest rolled on the following chart:

The chart uses the current Chaos Die according to my MCSV. I started this adventure at d8 (Out of Control) since that sums up how they left things in England. I also rolled random social classes for each one, and used the results to figure out their connexions and reasons for being on this journey.

The coachman was obviously a tradesman. I rolled tradesman for the strapping lass (STR 16) next to him on the 2x4 party character sheet, so proximity and social equality suggested she should be his daughter.

The mysterious Jeanne is also a tradeswoman by birth. I am leaving her background a bit of a blank, to be filled in by the Oracle when dramatically appropriate. She hasn't even told the rest where she's going.

Phlippe is a noble! He shouldn't be on this carriage; he has his own, and much fancier. But he passed out drunk in some lupanar in Calais, and his mates put him on the coach as a prank.

Frère Martin is a humble Franciscan of modest birth. Achille is a younger son of the gentry who has recently taken holy orders. The pair are bound for Amiens cathedral.

Lalie and Éliane are the PCs: a pair of feckless, treasure-hungry chancers with a somewhat loose interpretation of ethics (or is that definition a tautology?). None of the characters on the previous expedition were developed enough to have a social class, so I rolled for these two now; Lalie is the black sheep of a minor noble house, and Éliane is street scum from Paris. Lalie usually introduces her as a paid companion and/or bodyguard, but in truth they put no store in social matters. It does, however, allow them to move about in society. Being a magic-user means that Lalie has ties to the world of the universities, though as a woman would not have attended one herself. Thus, there are many scholars who know her as Laelia, her Latinised name, and a few friends who are aware of her occult pursuits call her Aelia Laelia as a joke.

The pair of them have a small travelling chest (counts as an oversized item for encumbrance) containing the books, scrolls and jewels they recovered on their first adventure.

If the PCs survive this adventure, I should probably reward them with surnames of their very own.

Toolbox for the adventure

Setup: In medias res - see below

It is a terrible night for travel. It was doubtful that they'd make the next coaching inn before daybreak even before the storm hit. Now the rain is falling in sheets, driven by the howling wind, and the occasional flash of lightning splits the sky. For the six passengers crammed inside the coach, the time for small talk has long since passed. None can sleep as the coach bounces over the uneven road, and a fair few times they have cause to fear the elements will overturn their creaking conveyance. Only the young nobleman is able to sleep, though in fact he hasn't been awake since his confrères bundled him into the coach in Calais. The others sit in an oppressive silence. There is some small comfort, for as damp and draughty as the coach is inside, at least they aren't sat atop it like the coachman and his daughter; though it be doubtful if any besides the monks have spared them the smallest compassionate thought.

...the coach lurches to an abrupt halt.

"What's wrong?" says Jeanne, her hand moving to rest on the concealed blade beneath her skirts "Why have we stopped?"

"You know what these roads are like," says Frère Martin.

"And in this weather!" adds his novice. "It's probably just a tree fallen over the road."

"I'm sure you're right," says Lalie, even as she and Éliane are making ready their pistols.

After a few moments, the coachman appears at the carriage door with lantern. As it opens those within are assaulted by the cold and wet. "Horse 's gone lame," he says bluntly. "Passed a manor house not too far back. I'll go for help. Me daughter'll stay up top and keep an eye out for bandits."

Nicodème closes the door soundly, and silence once again grips the coach's passengers. After a long space of stillness within -- though the storm shews no signs of abating without -- the drunken nobleman awakes with a start. [I rolled his reaction to the sudden "encounter"; 2d6=7, neutral.]

"What the...? Where the deuce am I? Is this a carriage? The devil take des Esseints and Durtal, those rascals! When I find my way back to Calais, they'll catch hell for this little jape -- please excuse my language, good ladies."

[Q:Does Nicodème make it to the manor? (Unknown: 1d6=1 100%; rolling for events or qualifiers) O3 C6 - simple, unmodified Yes.
Q: What happens when he gets there? bring / presence]

After the better part of an hour, a rider in a long, heavy cloak appears outside the carriage. He says that he was sent on ahead to inform them that a waggon has been dispatched to take them safely to the Château Drumer. Nicodème is waiting for them there before the fire.

Most of the castle is in darkness, but candles burn brightly in the entrance hall. The guests are ushered into a cosy sitting room with a blazing fire. Nicodème sits before it in borrowed clothes, eating bread and warm broth. A servant brings in food and wine for the rest, and announces that their effects are being brought up to the guest rooms, and please would they take some refreshment whilst all is being made ready.

[Everyone gets a Search roll to notice anything odd, but they all fail; even Éliane (search 4) rolls a 5!

Everyone greedily sets in to the food and wine, and there is a bit of jostling for position round the fire. The monks, of course, cede their places to the ladies. Philippe does not.

Everyone is feeling quite restored by the hospitality, when Lalie catches sight of a large mirror reflecting the dark, sombre curtains. It suddenly reminds her of one of the terrors she witnessed in England, the shattering mirror and the extra-dimensional space beyond, and the death of Fr. Daniel whose throat was transfixed by a shard.

Lalie cries out and swoons, and half-collapses into an overstuffed armchair. She drinks down a strong draught of wine in one gulp, and Éliane rushes to her side, refilling her cup [-2 poison saving throw].

But then Isabeau drops her cup. Moments later she is lying on the floor beside it. And one by one the poisoned wine overcomes the others, and they drop into unconsciousness.

No one really needs to read the saving throw results, but for a party of 8 it's nice to roll them all at once and then look them up. It looks like only the PCs saved... how convenient!

"We've got to get out of here!" cries Éliane, throwing her cup to the floor.

"Not without all our things!" replies Lalie.

"You're right! they were too hard won! When the servant comes to check on us, we'll jump him."

"You take the fireplace poker. I've my dagger yet."

"Alright. I'll sit back by the fire, pretend to be asleep."

After a few interminable-seeming minutes, the door opens and three housemaids enter. They check on each of the slumped figures in turn to make sure the poison has done its work. Éliane stands up slowly, and pulls the door silently to. [She has Stealth-4; her check is d6=1, success]

She creeps up behind one of the maids, grabs her mouth from behind and slips her dagger into the girl's lower back. The maid lets out a muffled cry and collapses to the floor with a thud.

Lalie springs to her feet and brandishes the poker. "Surrender or you'll meet the same fate!"

The two maids stiffen, they look to one another, and then to the body of their slain comrade. A look of fear passes over them. [ML7; ML check 2d6=11, fail]

"Why are you doing this?" asks Lalie.

"You've nothing to fear," says one of the maids. "We are preparing them for a better Way of Life. Have you no concept of the Power granted to us by the Old Ones? Do you not also wish to bask in their Radiant Glories?"

"So it is, I guess. It is the prayer as was taught us by his reverence."

"What does it mean?" asks Éliane.

"What have you done with our things?" asks Éliane.

"They're up in your rooms. We thought you'd be in bed before the sleeping draught took hold."

"Really, this is all too much! You won't need your things when you see the golden future by that is planned for you! Come, let's discuss this like friends. There's no need for this unpleasantness." [UNE: insane - turmoil - rewards]

"I don't trust them," says Lalaie.

Éliane stabs a second one in the back [3x2=6dmg, 2hp=dead]. "Easier to keep one under control than two," she says.

The remaining maid looks a bit pale, but is otherwise calm.

"Take us to retrieve our things now. One scream and you're done for, understand?"

During the course of her last adventure, Lalie made a Language roll to know Greek. She's got a good humanist education and uses Erasmian pronunciation.
Posted by Alea iactanda est at 12:38

Email ThisBlogThis!Share to TwitterShare to FacebookShare to Pinterest
Labels: let me tell you about my character, LotFP