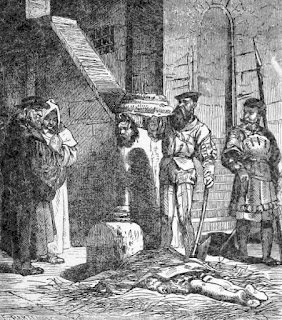 
To start my campaign, I decided to generate a party of eight adventurers. Since I had more opinions about setting than characters, I rolled them all completely at random, including class (1d4) and gender (1d2). I will assume the reader is sufficiently familiar with the mechanics of rolling up OSR-type PCs (or isn't particularly bothered) and skip to the important part, which is determining their relationships to one another and to the setting itself.

To start with, I rolled Origin, Social Class, and Religion according to the tables in my last post. Most of the PCs are native Praguers and/or residents of the city, and I will figure out residences and finances for any of them that survive the first adventure.

Once I knew where they were from, I named all the characters. Any character connected to the world of the Universities -- in all cases below, specifically to Univerzita Karlova (Charles University) -- has their Latinised name in quotes. For some, it is the name they commonly go by, and so is presented first.

I made language rolls for each PC, checking for Czech, French, German, Hebrew, Latin, and Silesian. The party's lingua franca is most assuredly German, so one of them (Anežka, I think) got a free language; the rest rolled well on that round.

Now that they were starting to look like people rather than stat blocks, I got out my trusty copy of Star Trader and rolled for connections between characters.

Finally, I wanted each character to have a Dark Secret. I used the following table (adapted from the Kult RPG) to determine the kind of secret, and then used the Mythic GME's event meaning tables to define some of them further.

I didn't go overboard with background, as these are all first level PCs, and my games have a pretty high mortality rate. Plus, it's more fun to develop them through play. In fact, some of the backgrounds below contain specifics that came about as the adventure progressed (just one benefit to playing far beyond what I have time to post). 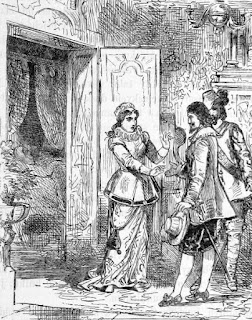 Valentinus is a Catholic priest attached to the Kostel svatého Ducha (Church of the Holy Ghost), which is the nearest church to the Jewish quarter. This proximity is unfortunate, for he holds most of the popular prejudices against the Jews, though none of the superstitious ones. His family hails from Prague's German gentry, which afforded him a good education, though he understands practical things (Wis 17) much better than the concepts behind them (Int 9). He makes up for this deficiency with pomposity, self-righteousness, and arrogance; he's basically a bit of a pratt (Cha 7).

Connexion: blames Šimon for past event. [Mythic: Lie / Evil]
Valentinus professes that the Jew Šimon will someday be brought to justice for the disappearances of several Christian children from good families. He knows Šimon is innocent of this crime, but doesn't care, for he is most certainly guilty of others, even if they only be the hereditary crime of his race, i.e. the killing of the Christ.

Dark Secret: family secret [Extravagance / Food]
The elders of the Spieß family are cannibals, and meet once a year to hold a secret feast, where they induct select members of the younger generation.

Theophilus is the son of a German count (Graf) from Bunzlau (Mladá Boleslav) in Bohemia. He studied briefly at Univerzita Karlova, but dropped out to pursue his studies of the magical arts. He had a reputation as a bit of a rakehell in his youth, and usually lets on that this resulted in his expulsion from the university, in order to conceal the truth.

Connexion: Friendship with Kateřina through guilt [Neglect / Prison]
Theophilus he gave evidence at the trial of Kateřina's brother, which resulted in him being thrown into prison, where he later starved to death. He hopes to someday make it up to her, even though he looks down on her as a social inferior (and is loathe to admit this mere girl is cleverer than he (Int 17 & 14 respectively)).

Dark Secret: haunted
As a young and under-cautious student of the Art, he once raised the ghost of a long-dead courtesan, said to have been the most beautiful woman in the court of king Václav II. He still cannot rid himself of this most troublesome spirit.

Šimon the clockmaker is a small, fine-boned, white-bearded man with a gnome-like twinkle in his eye, who is considered to be a good and wise pillar of the community in Josefov (the Jewish quarter). In reality, he has a host of unsavoury friends, but they do get things done. Šimon is very protective of his people, and will stop at nothing to remove threats to their well-being.

Connexion: Bitter with Pauwel about past event
Pauwel, the foreign mercenary, caused a violent tavern brawl in which many Jews were seriously injured or killed. [Violate / Peace]

Dark Secret: pact with dark powers
Though no magician himself, Šimon did once open an accursed old book and cause a spirit to appear. The spirit offered to help Šimon in his hour of greatest need, but this aid comes with a price.

Kateřina is the youngest of [1d6+1=] four children of a prominent jurist. A precocious child (Int 17), she dreamt of following in her brothers' footsteps and attending university. Alas, she was born three centuries too early, and had to make do with private tutors. One of her tutors had more esoteric pursuits in addition to natural philosophy, and through him she was introduced to Eufemia Švarcová, a genteel young lady and fellow practitioner of the magical arts (NPC).

Connexion: Knows Judit's dark secret
In the course of her wizardly errands, Kateřina has travelled to seamy parts of Prague the likes of which she'd never seen before. She's met the fiends that once imprisoned Judit bat Nachmias, and knows why they marked her flesh with certain sigils.

Dark Secret: forbidden knowledge
Kateřina has looked into books better left unread, and has pronounced words better left unspoken; she has seen beyond the veil of the everyday world, and glimpsed an unfathomable secret. [Open / Night]

Anežka grew up in a hovel, and has had to fight for everything she ever got in this life. At the age of twelve she ran away to life on the streets as a pickpocket, soon forming her own little gang. Her activities soon came to the attention of a local crime boss, who added her to his 'family'. Anežka is smart enough to avoid most kinds of trouble (Int 13), but once she gets into it she tends to make a right mess of things (Wis 3); she just never knows when to quit.

Connexion: Dependant on Kateřina for emotional reasons
Anežka once was engaged by a gentlewoman (the above-mentioned NPC, Eufemia Švarcová) to steal some rather peculiar items from an alchemist. The lady sent a novice wizard as a go-between, whom she recognized as the daughter of that lawyer who sent down several of her comrades. But rather than seeking revenge, she's done her best to kindle a friendship, in hopes that Kateřina will be able to use her magic to erase the bad memories of the horrific crime she'd committed. [Move / The spiritual]

Dark Secret: guilty of crime
A break-in went very wrong and she was discovered in a wealthy residence. The burglary turned into a massacre of the entire family.

Young Pauwel always longed for a life of adventure. In his 17th year he managed to steal a sword and helmet, and ran off to become a mercenary soldier. Army life did not suit the undisciplined lad, so he deserted at the first opportunity and set out to make his fortune in the big city.

Connexion: Competitive rival with Anežka
Pauwel now works for Anežka's boss, who often sends him along with her when she needs muscle. Pauwel knows that the best way to rise in the boss' esteem would be to prove he's the more valuable employee.

Dark Secret: possessed
Pauwel hears voices telling him to do terrible things. Sometimes he does them.

Judit's parents were booksellers in Josefov. She was always superstitious, but after her parents' deaths she became obsessed with mysticism. She sought out wise old Šimon, who impressed upon her the need to safeguard their people, and now she wanders the streets of the quarter with her sword as a protector.

Connexion: Admires Šimon
She looks up to him as a surrogate father. Or grandfather.

Dark Secret: victim of crime
Judit once went to Malá Strana to consult a fortune-teller, who turned out to be a member of a cult worshipping the Other Gods. She was imprisoned in a dark cell for a fortnight, and blasphemous sigils were cut into her skin for an unknown and unknowable purpose. She doesn't remember how she escaped, and never told anyone about it -- not even Šimon. Her arms, legs, and torso are covered with arcane scars, but fortunately the modesty of her dress keeps them hidden.

Gephardt was a Doppelsöldner, fighting for the Emperor against the Turks in Hungary. When supplies dwindled and pay was scarce, Gephardt joined in taking what he needed from the local peasants. When he felt that he'd collected his due, plus a little more besides, he wandered off north in search of an easier life. He's now employed by Theophilus as a bodyguard.

Connexion: Secretly jealous of Theophilus
Theophilus has never had to work a day in his life. Should he get stingy with remuneration...


Next post: the adventure commences! Hopefully I'll get it up before too long, but as it's the month of Gothtober I'm inordinately busy... 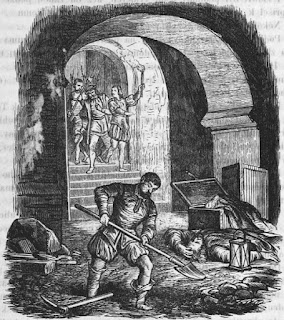 Email ThisBlogThis!Share to TwitterShare to FacebookShare to Pinterest
Labels: let me tell you about my character, LotFP