BRP solo - Part II: "And I have no remorse and little fear" 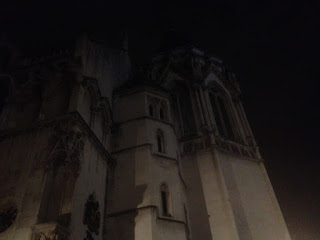 Lycinia hasn't gone far from the sage's home when she overhears a mismatched pair talking in low tones. One appears to be an enormous woodsman. His hair and beard are wild, but wilder still are the piercing eyes staring madly out from his craggy face. A sharp hatchet hangs at his belt, the freshly honed blade glinting when it catches the light spilling out from various shops into the street. His interlocutor is an emaciated woman in clerks' dress, complete with ink stained fingers and a pronounced stoop.

Setup: Interrupt (was: go talk to importers)
Interrupt: Move toward a thread (a clue!) - behold / conversation

"We shouldn't have gone to the sage first," says the notary. "He's likely to blab."

"Don't worry," replies the woodsman. "I can keep him quiet."

Lycinia's interest is piqued, and she decides to follow the two.

They are headed, unsurprisingly, right to the sage's house. Lycinia stops short, under an awning, and whispers the words to a spell. An instant later she walks toward the house, unseen by all mortal eyes. [She took an extra round for the casting, giving a bonus equal to her INT (+16%) to cast Invisibility (46+16=)62%: 13, success. The spell costs 4 Magic Points, leaving her with 8.] She watches and attempts to Listen [44%] through the window, but cannot make out any of the conversation within.

She see the woodsman looming over the terrified sage. Their words become heated, though no more distinct through the thick glass. Then the woodman's hand flies to his belt, and he brandishes his hatchet above his head. Lycinia knows she must act. She hurriedly speaks the words of an incantation...

...and the sage, woodsman, and notary slip peacefully to the floor in a deep slumber.

Working the charm has rendered her suddenly visible, but if any of the passers-by have noticed the sudden appearance of an elf in the street, they do not react. Such is simply the way of things in a city possessed of a mages' guild.

Lycinia casually walks inside, and rouses the sleeping sage.

The elf puts a finger to her lips. "Softly! They won't be asleep for long. Who are these two?"

"I can't say any more! I know nothing! Please leave."

Lycinia sits on the notary's chest. She clamps a hand over her mouth, and holds a long, pointed dagger at her throat. The woman wakes with a start.

"Your friend wouldn't talk so I cut his throat," says Lycinia. "I'd caution you not to make the same mistake. Now, what are you doing here?" [Easy Persuade again, success]

"W-we needed to silence the old fool before his prating cast suspicious on us."

"And...? I have a name in mind, and should you not admit it your usefulness is at an end."

Lycinia presses the point of her miséricorde into the woman's throat a little more.

"I'm telling the truth! We've not yet earned the master's trust enough to be shown the sanctum."

"He sends a messenger."

Lycinia stands up and pats the pistol at her belt. "Don't run," she says to the notary as she helps her up from the floor. "It's easier to hit a target in the back." As they are leaving, Lycinia turns briefly to the sage. "I'd call for the watch before that one comes round." The notary looks startled to see her companion yet lives. "I lied," explains Lycinia, "but only about that. I meant it about not running." 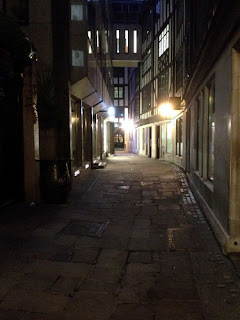 They have gone barely three blocks before a dishevelled young man in filthy rags staggers up to Lycinia and grabs the hem of her tunic. "Pleassshe, you mus... mus help meeeee. I'm the Count d'Arndellllll. The...rrr after meeee."

"Be off with you!" growls Lycinia, shoving him away. "Find a place to sleep it off!" [Persuade (23%) roll to scare him off: success]

The man lurches away.

[Rolled encounter was actually: 'drugged noble who has escaped captors and needs help'. Lycinia needed a Physik (23%) roll to realise he wasn't just a drunk, but failed.]

When they pass into the new town, a group of street urchins race past, almost knocking them over. A group of watch soldiers are in pursuit, clanking and huffing, straining to run in their heavy breastplates and tassets.

"Don't think of entreating them for help," says Lycinia quietly. "Remember your friend has been arrested by now."

Setup: at the notary's house

The notary lives in a very tall, very narrow cottage on a quiet little street in the New Town. She has sworn to Lycinia that she lives by herself -- her servant lives out -- so they should be quite alone inside. Lycinia mostly believes her, but keeps a hand on her sword as the notary fumbles for her key and walks inside.

Only a single candle burns inside on a table in the parlour, left by the maid for her mistress' return. The notary offers to light some more, but Lycinia declines the suggestion; her elven senses are perfectly attuned to the half-light. She finds a blanket on the settee, cuts it in strips with her dagger, and ties the notary to a wooden chair. The last strip of cloth she binds loosely round the woman's neck for a gag, but does not stop her mouth.

"Let's talk some more," says the elf, sitting across from her on the settee.

"Involve herself in human affairs."

"I'm doing this for a friend. A human friend. We do have them."

"A friend in the Guild?"

"Hah! You're mad. Or else, very naïve. Guild wizards don't have friends: only pawns. Even elven ones."

"Maybe. But the one I seek is also of the Guild. So let me ask the same question: why are *you* involved?"

"If Geredrom deciphers the riddles, and can reveal the Great Mystery, he'll have more power than the whole Guild combined. Better his trusted servant than the rabble to be swept away when his might is unleashed 'pon the unsuspecting world." [mysterious - conundrum - power]

"You believe him that capable?"

"I have seen a glimpse of his Power. He made gold out of nothing! out of the very air! and then laughed, said it wasn't what he'd hoped to conjure, and gave me the solid lump as a gift. I weighed it; pure solid gold. It was worth 1319 silver pieces!" [insane - accident - rewards; the lump was approx. as much gold as 26GP]

The conversation continues in this vein for a while, until Lycinia gets bored, applies the gag, and sets about searching the house.

She finds nothing of even passing interest, but as she is looking she hears the front door open, and a man's voice call out "halloo?". She rushes down the stairs taking three at a time [Agility roll (90%) succeeds] to find a man in a voluminous ermine cape looking more than a little surprised at the sight of his bound paramour and an elf on the staircase.

"Who are you?" say Lycinia and the man in unison. And then, still in unison, they draw their blades.

They rush at each other, Lycinia leaping gracefully down the last three steps. Her shining sword bats his rapier aside and continues straight into his chest, slipping between to ribs with a crunch and a gout of blood. He falls, helpless and gurgling. [For going to negative HP in the chest, he must make a Stamina roll (CONx5%) every round or lose 1hp from blood loss until he either receives successful first aid (Physik) or dies.]

Lycinia kicks his rapier away and kneels beside him. "I hadn't hoped to kill you," she mutters, "but scream, and it will be your end. Now lie still and let me tend that."

In his injured state, he cannot but comply, nor even complain as the elf sets about her rough ministrations, trying to staunch the flow of blood with the hem of his expensive cape.

He can still try to roll CONx1 to perform an action, but bleeding will recommence in the attempt.]

Lycinia binds his hands and feet with strips cut from his cape and leans him upright in a chair. She gags him with some ermine as a precaution, then turns back to the notary.

She shakes her head.

"Is he involved in the plot?"

She shakes her head again.

"So he's not worth keeping alive, then."

"I've had enough of this. the guild is going to stop Geredrom, and I'm the instrument of their design. I'm going to take off your gag and you're going to tell me everything you know or even suspect or I'm going to have you thrown into jail as your paramour here's murderess." [Persuade 23+25=48%:  13, success]

"He must next make a great sacrifice to the Mother of Carrion [UNE knowing - telling - future action; Mythic - give / Mother; Loc. Crafter Descriptor 2= Ruined]. He requires [1d6: 1 people, 2 livestock, 3 predators, 4 scavengers, 5 exotic species, 6 quantity over quality; 5] strange beasts from across the sea to make the sacrifice most pleasing."

"Where's he getting them?"

"Rannard d'Otorio, an importer, deals in such creatures."

"Where do I find this importer."

"I don't intend to," says Lycinia, as the light plays along the blade of her miséricorde. "I'm sorry it must end like this, but you'd have done the same to me..." 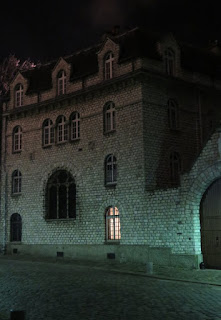 next post: more leads, and a pleasant trip to the countryside
Posted by Alea iactanda est at 20:12