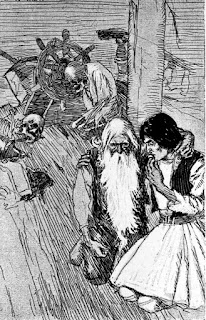 "I tire of this voyage," thought Ksandajja as she stumbled wearily out of her cramped cabin and made her unsteady way down the narrow gloomy corridor, doing her best to sway in time with the pitch and roll of the ship. "The sailors are a loutish rabble, and my fellow travellers a boorish city-dweller who fancies himself a charming rogue and a wizard who thinks advancing age has somehow rendered him wise. The captain has forgotten to rouse me for mealtime. And -- phaugh! -- someone's spilt oil all over this ladder."

But when she climbed up to the deck, and her eyes adjusted to the bright, overcast day, a vision of horror met her eyes. The crew had all been reduced to white skeletons, clad in tatters and glistening with a sheen of running fat. The only two souls left alive were Valganadd, the old wizard, and the young rakehell, Lisk, who were huddled together on the deck. The wizard gave a flask to the rogue who greedily drained the healing elixir within. Ksandajja watched as the magic coursed through him, growing back the flesh of his ruined arm.

"You're alive!" exclaimed the rogue. "You may be the only one left. Look what happened to the crew. What almost happened to me! Something touched my arm down in the darkness of the hold, and the flesh ran off it like hot wax. What was that thing? What can we do?"

"We kill it," said Ksandajja, drawing her sword. "You were fortunate it didn't grab your arm any tighter. This carnage is the work of a FLESH MELTER."

NPC List: whoever those two in the picture are

Threads: some Quest or other

[I prefer to start posts with narrative rather than game mechanics. My notes are much less elegant. Here's how I arrived at the above:

To set up the first scene, I opened up my folder of unsorted pictures and did a random slideshow until I got one that fit the game and seemed to have something going on. The caption under it originally said something about kissing a holy relic to dispel the evil phantoms, which is a pretty poor start to an adventure. So it was better to make a random table to play off of:

But before I rolled for the cause, I had Ksandajja Test her SKILL to see if she could divine what happened. Her SKILL is 6, and she gets a +2 bonus for knowledge skill use from Learned talent, so she must roll 8 or less on 2d6 in order to succeed: 2d6=5, success. 1d6=monster.]

"What are you doing now?" asks Lisk with feigned bravado. "Why do you just stand there? Not afraid, are you?"

"I shall let it come to me. Better to fight up here on the deck then down below where there's no room to manoeuvre."

Ksandajja takes position by the hatch whilst the other two hang back out of harm's way. She hears movement coming from below, but to her disappointment, it is the hatch all the way at the other end of the ship which is thrown open. The beast has flopped up onto the deck before she can make her way across to it.

The flesh melter has the general form of an octopus crowned by a head which is neither swine nor dog nor reptile, but an unholy amalgamation of the three. Its slavering jaws snap and drool, and the hole body glistens with a greasy sheen, every pore exuding the toxin that reduces flesh to tallow. It is smaller than Ksandajja had anticipated for a creature of such fearsome repute, but she fears it no less than it deserves. 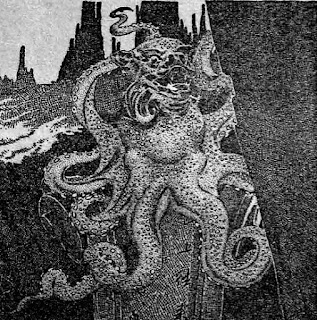 [Combat is broadly similar to the Fighting fantasy gamebooks, but there are a few enhancements such as variable weapon damage, armour, situational modifiers, criticals, fumbles, and special manoeuvres.

For the slippery deck, I ruled that fumbles would take place if the dice came up 2, 3, or 4 (instead of just 2). In retrospect, the rough sea should also have been worth a -1 penalty to actions, but for a straight fight, the -1s cancel out so the effect is the same.

Since the monster is something I just made up, I gave it Skill of 1d6+3, and 2d6 Stamina.]

[round 1]
Ksandajja and the Flesh Melter face off as the ship rolls beneath them. She makes a few tentative swings with her sword, and the monster responds with a few half-hearted swipes at her face, but neither come close to a hit.

[Round 2]
The elastic thing has a longer reach than she'd expected, and Ksandajja nearly gets slapped across the face by its suckered tentacle, but she ducks under it at the last instant and draws her sword across its blubbery midsection, opening a deep and gory rent.

Ksandajja has no damage modifier, so hits it for (1d6=4) 3 damage, leaving it with 2 STAMINA.] 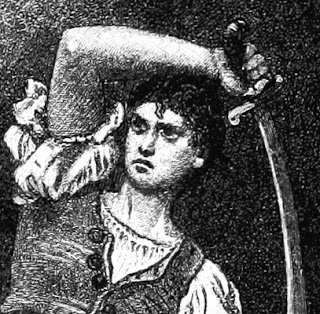 [Round 3]
The flesh melter lets out an ear-piercing wail as it feels the bite of sharp steel. Its eyes narrow in an almost human expression of rage, and it makes a desperate lunge at the meal which was so foolish as to hurt it. Ksandajja responds with calm and forethought, and the swift arc of her blade splits the hapless creature's skull nearly in twain. It flops dead at her feet on the greasy deck.

[She rolls a total of 17 vs. its 16, hitting for 3 more damage. NPCs can usually be considered dead at 0 STAMINA, so the Flesh Melter is vanquished.

It never hit, so I didn't have to work out how much damage it does. For flesh melting, it should probably inflict damage equal to Very Large Bite/Claw (despite its size), but armour rolls (only; not shields or dodges) receive +1 against it as less flesh is exposed to be melted.]

"Not bad," says Lisk. "Not bad at all. Where'd you learn to use a sword like that? The Great Arena of Port Skull?"

"Do you mean to insult me? Everyone knows the gladiatorial schools of Port Skull teach inferior swordsmanship than those of Zthaan."

"It was a joke... no matter. Fetch some ropes. I want to drag this thing overboard. Before it starts to smell."

Once the oozing carcass has been pitched over the side, Ksandajja turns to her companions. "We seem to be adrift. I don't suppose either of you knows anything about sailing?"

The old man looks briefly as if he is about to speak, but then does not. The young rogue seems unduly interested in examining his own boots.

"Right, then," says the daughter of the desert, "I shall be our captain." 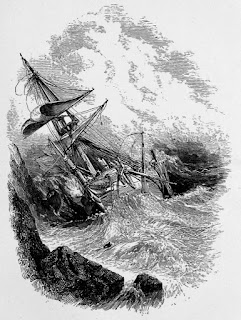 [Five minutes into my single-PC-against-the-world campaign, and already there's a party of three. So I quickly threw together 2 more starting characters.


Ksandajja must test her SKILL to pilot the ship safely to port. She doesn't have the Sea Lore special skill, but her Learned talent gives her a +2, for an effective Skill of 6+2=8. But rather fittingly, she rolls a natural 12: disaster!]

Ksandajja takes the rudder, and barks out commands to the other two, who attempt to wrestle with the sail. They manage to catch the wind, and soon the ship is once again speeding along the coast towards their original destination, the port city of Ulq.

The clouds grow ever darker, and the wind increases in strength. Soon the rain begins to fall, hammering the deck of the little ship. It is all Ksandajja can do to keep the boat sailing in the direction of the city. She grips the rudder with all her might, forcing the boat to travel parallel to the coast. But so intent is she on maintaining the heading that she doesn't notice the rocks ahead, protruding just above the choppy surface of the frothing waters. 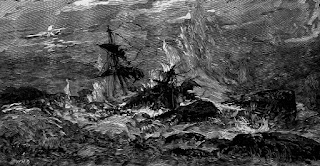 The sound of the hull splintering beneath them is louder even than the roar of the gale. The three travellers are thrown to the deck...

[To avoid injury they must each Test their LUCK (rolling 2d6 less than or equal to their current Luck score). Lisk has 12 Luck, so cannot fail (no crits or fumbles for Luck rolls), the other two need to roll 9 or less.

All three succeed, so suffer no damage.

Every time Luck is tested, it is reduced by one, so eventually a PC's Luck will run out. Luck is (usually) replenished at the end of an adventure, but Luck potions and fortunate events can also restore Luck points. It occurs to me as I am typing these words that random PC Positive events (via Mythic) would be a good way of deciding when to restore Luck without having to resort to GM-mode. This probably means I should stop re-rolling them for once.]

...but other than a few bruises are unhurt. Not so the little ship, which is even now falling into a pile of shattered timber beneath them. The three survivors scramble over what's left of the deck and hurl themselves overboard. Ksandajja and Lisk swim towards the shore, somehow fighting their way safely past the rocks through the churning waves. Valganadd lets himself sink down to the seabed, having invoked the Fourfold Power of the Endless Void, allowing him to breathe without drawing breath. He trudges along the sandy bottom, moving slowly but resolutely against the current. The other two had just about given him up for drowned by the time he walks out of the surf. 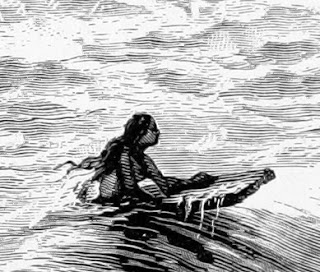 [None of our heroes have the Swim special skill, so Ksandajja and Lisk needed unmodified Skill tests to swim to shore.

Valganadd cast the Breathe spell before jumping overboard. To do this, he needed to roll under (or equal to) the total of his Magic (7) + Wizardry special skill (2): 2d6=6, success. The spell cost 2 Magic Points (leaving him with 17). I ruled he could make Swim rolls (against his Skill of 4) until he either succeeded or rolled a natural 12.

They all made the rolls they needed (Valganadd after 4 tries), so no one was swept out to sea.]

The three of them stand on the beach, taking stock of their situation. Valganadd has nothing but the sodden clothes he wears. Lisk has his dagger, which he dashingly carried in his teeth. Ksandajja has only the purse at her belt, containing seven gold coins and a set of nose plugs (necessary for one of her spells).

"Night will soon be upon us," says Ksandajja. 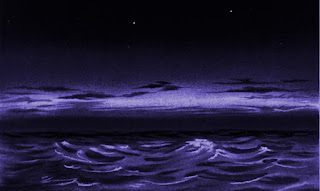