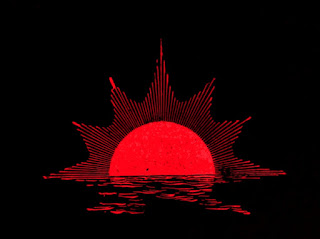 Travelling by night through a strange land with no equipment would be suicidal, so they decide to make camp on the beach. Ksandajja finds enough dry drift wood to make a fire in the lee of a stony hillock. Valganadd is charged with kindling the flames. Lisk collects some edible seaweed for their repast; it is unpleasant but sustaining.

Q: Night encounter? 1-2 on d6: Yes. Out of the Pit has a handy sea shore encounter table.

That night, as Valganadd keeps vigil, a squamous green SEA TROLL emerges from the surf. The ravenous monster sees the wretched trio round the campfire, and squelches up through the darkness to snatch up a tender morsel. 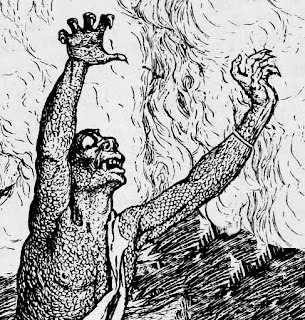 But as it fantasises about the taste of raw, delectable human, it loses sight of its surroundings. As it makes to spring upon the hapless wizard, its foot gets caught beneath a rotten board from an old shipwreck, and the troll flops onto the ground with an almighty thud.[It rolled a natural 2 on its attack, a Fumble; it will need a full round to stand].

Valganadd wheels round at the noise, and seeing the horrid troll before him unleashes a blast of magical force into it [Force Bolt, for 1d6=3 damage]. He blasts it a second time [4 damage], then the troll loses its nerve and runs back into the sea.

Ksandajja and Lisk awaken groggily. "What was all that noise?" asks Lisk.


In the morning, the weary travellers scan the horizon. "How far are we from Ângu?" asks Lisk.

"I do not know," replies Ksandajja. "But if we head south we're sure to reach it. Eventually."

"If we keep the sea on our right, we surely can't get lost."

After choking down a few scant mouthfuls of seaweed that Lisk has provided for their repast, they set off to the south. The coast is jagged and rocky, and they soon must leave the beach to make their way over scrubland and round rocky hills.

"I wish we could find some water," says Ksandajja.

Half an hour later, she's almost sorry she'd said it, for the winds blow fierce and the heavens open up, so that the travellers struggle to advance against the driving rain. But blind luck is with them, as they soon stumble across the ruins of a stone watchtower that should provide some shelter from the torrent. 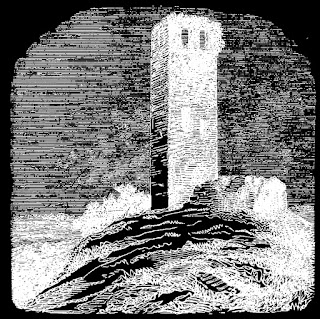 The tower itself provides but little refuge; the wooden floors and roof have long since rotted away, leaving only the stone shell. The ground inside is already a maze of puddles, but a narrow stone staircase leads down into the earth.

Lisk leads the way down the slick stone steps. At the bottom is a short, low passage ending in a stout wooden door, which has been spared the ravages of time and tempest. Lisk grasps the iron ring, and his hand is stuck fast. The door's surface begins to flow, extruding a long tendril topped with a clenched fist. This is no door, but an IMITATOR! Before anyone has a chance to react, the great fist pummels the hapless rogue. There is a sharp crack as it smashes into his sternum, breaking several ribs. 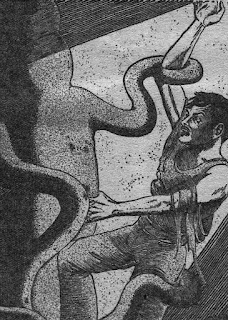 [I'd rolled 1d3 to see who went first. The Imitator rolled a natural 12, a critical hit. Criticals do double damage and reduce the target's Skill by 1 (which requires a week's rest to heal). Lisk takes 6 damage, reducing him to 6 Stamina and 6 Skill.]

[Round 1]
Valganadd unleashes a blast of raw magical energy into the creature [Force Bolt for 6 damage, reducing it to 2 stamina]. Lisk attempts to fight back with his dagger [at -2 for being stuck], but takes another solid punch [3 damage leaves him with to 3 Stamina]. Ksandajja feels useless, as there is no room in the narrow corridor for her to join the fight.

[Round 2]
But it is all over in a moment, as another mystical blast from Valganadd ends the horrid creature.

Lisk is free to scrape the sticky monster off his hands at leisure.

[Advanced Fighting Fantasy comes with a very simple dungeon generator. It's perfectly adequate for giving a GM the outline of a dungeon to develop, but as a solo tool it is a bit sparse, roughly on par with the Moldvay Basic D&D dungeon stocking rules. As this was my first go with it, I adhered to it pretty closely in order to give it a good test run.

It suggests that a typical dungeon level should have 1d6+6 rooms, but that seemed a little excessive for the storerooms beneath a watchtower. I went with 1d6+3=5 rooms. For each room, a d6 is thrown onto a piece of paper, and read as a d3 for number of entrances/exits. Corridors are then drawn in linking the rooms, to produce a rough schema.]

Beyond the false door lies an old store room [room 1 - room numbers on the sketch map are circled, the numbers in the rooms were the d3 results for number of exits]. Barely any light filters down from outside, but with careful searching the travellers are able to find a tinderbox and candles on the old quartermaster's desk. By candlelight they are able to conduct  proper search.

An old weapon rack contains some rusting but still serviceable swords [will break if doubles rolled in combat (hit or miss)]. Ksandajja and Lisk help themselves to these. Valganadd finds the haft of a spear to answer for a staff. They help themselves to a couple torches out of a barrel and, propelled by curiosity, set off down the rude tunnel deeper inside.

At the end of the corridor, the travellers enter the tower's food store [Room 2]. Rows of wooden shelves stretch floor to ceiling, upon which are heaped the end products of decades' worth of decay: mummified sides of beef, barrels of vinegar, sacks of sludge, and round fungal colonies which were once wheels of cheese. The pungent odour is beyond description, though not entirely unpleasant.

[Rolling for an encounter reveals there are 6 FLESH GRUBS here. The PCs must Test their LUCK to avoid them; only Valganadd makes the roll.]

They hasten across the room to the far exit, but as they do, horrible glistening worms begin falling from the shelves, and they must run to avoid being covered in the things. Valganadd emerges into the corridor unscathed, but his companions each find three of the awful vermin have latched onto their flesh by their greedy sucking maws. Gobbets of skin come away as they pull of the slimy creatures and stamp them underfoot [detaching each grub inflicts a point of damage]. Valganadd is able to staunch the bleeding and bind Lisk's wounds, but his ministrations on Ksandajja are less successful, and her bandages are soon wet and sticky with blood seeping through.

[Valganadd used his Healing special skill to restore 2 Stamina to Lisk; he failed his roll for Ksandajja.

Since I generated the map in advance, the PCs will move randomly when faced with a choice of directions.]

Continuing forward, they come to a T-junction, and go down the left-hand fork which ends in an iron door [Room 3]. Ksandajja pushes it open with her foot. She doesn't feel the magical energies surrounding it until too late, and with a flash of sickly green light she feels a heaviness seize her limbs. [She failed a Second Sight (special magical skill) roll to detect the enchantment/trap and was blasted with random spell: Weakness (-1 Skill for the next fight).]

Undaunted, she leads her companions into the room, which is dominated by sagging (and empty) bookshelves and a collapsed table in the centre. Ksandajja is about to examine the ragged parchment on the table when a pair of animated SKELETONS step forth out of the gloom. 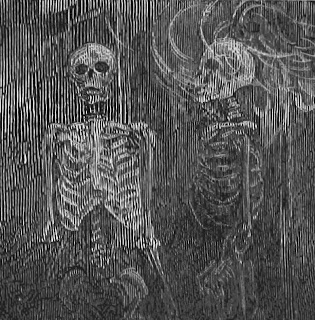 [Rounds 1-3]
Valganadd tries to call upon arcane forces [Force Bolt] to destroy one of the horrors clacking across the stone floor. But in his haste he trips over the syllables of the words of mystic might, and begins to hiccup uncontrollably as the untamed power courses through him [he rolled a natural 12 on his casting roll, a critical failure. This required a roll on the Oops table for spell fumbles, resulting in hiccups lasting 1d6=3 hours, for a -4 penalty on all spellcasting]. Valganadd begins the spell anew, this time letting the energy build up within him slowly as his companions do battle.

Ksandajja faces off with the first skeleton, which wields a corroded battleaxe. Despite the Curse of Fatigue, she maintains the upper hand, though it barely seems hampered by the chips of bone she strikes off with her sword [hits thrice for 3 total damage, dropping it to 2 Stamina].

Lisk's opponent wields a rusty, iron-tipped spear. Twice he slides in under its guard, his  sword no more effective than Ksandajja's. But the undead fiend is a cannier fighter than he anticipates, and he is skewered. He collapses from shock, bleeding profusely over the dusty stone floor [he hit twice for 2 damage, then the skeleton hit, reducing him to 0 Stamina exactly].

[Rounds 4-6]
Valganadd feels the magic build to a crescendo, and intones again the mystic syllables [+4 for 2 extra rounds of casting cancels the -4 penalty so he has his usual 9 (Magic 7 + 2 wizardry special skill), but 2d6=10]. But at the last moment, a hiccup shakes his frame, and the blast of energy comes as but a tiny wisp of smoke. 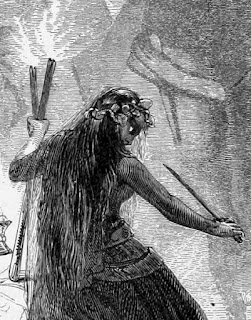 Ksandajja now faces two undead foes [and each gets +1 to Skill for attack for superior numbers], but as the spear-wielder stumbles forward over the fallen Lisk, its loses its balance, dropping its weapon at Ksandajja's feet [it fumbled 2 rounds in a row]. She does not waste her advantage, striking swiftly and surely at the other, which soon falls to the ground in a clatter of bones with an axe betwixt.

[Round 7-9]
Valganadd watches calmly as Ksandajja makes short work of the other skeleton.

As she catches her breath (or --less charitably-- once it's entirely safe), Valganadd looks to his fallen companion. Lisk yet lives, and with a minimum of ministrations is brought round [First Aid check succeeded, bringing him back up to 2 Stamina].