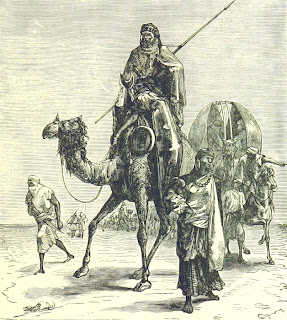 The morning after the mercenaries' departure, Lachaidiga at first fancies the mood in the camp to be somewhat nervous, but once they are once again underway, she begins to realise that it is she who is worried. The nomad's songs are no less fervent, their jokes no less ribald than they have been before. Ni'arouj is still cold and distant, but that has always been her way toward the sorceress. Lachaidiga's fears slowly subside; not, in fact, because she feels any more ready for the unimagined or perhaps unimaginable horrors lurking in the wastes, but rather the monotony of the journey through the plains of sand and rock begins to make her feel quite dull. From time to time she jerks awake out of a half-dreaming state, ever fearful of drifting off completely and falling from her mount. She tries in vain to speak with Ni'arouj. The nomad woman responds by becoming more than unusually taciturn, and brushes off all Lachaidiga's petty questions and feeble attempts at conversation. Lachaidiga soon gives up, fearful that she'll provoke the woman to anger and be left behind in the desert. "Perhaps she really does despise me," she reasons, "for exposing her caravan to such danger."

Lachaidiga slows the pace of her camel slightly and falls back in with the rest, and seeks other sorts of diversions. She studies the terrain about her, tries to see it as the caravan mistress must. She starts to find that it isn't all the same, though it be much less varied than the splendid wards of her beloved Anzakàr. And there is so little relief from the omni-present sun. But despite her painful sunburn, she finds for once she cannot fault the daytime orb, for it brings her thoughts ever back to her sweet Nillath whom she had to leave behind in Anzakàr, lovely Nillath who would glory in the radiance of the desert, dear Nillath who would tease her mercilessly for her pink and peeling face. "One day," she thinks, "when this is all behind me, when Enzzal realises I was right to run as I did, perhaps I will have to take Nillath out here to see this beautiful desert. Although if Enzzal's rage doesn't subside... she'll just have to come visit me in Hasharu. But whichever of the two the fates decree, I hope there can be horses for travel instead of these smelly camels!"

Each hex = 5km
Random encounters will be determined by grabbing a random picture from one of three folders according to the die roll; check 2/day, 1/night on 1d10

I thought I remembered camel stats in some edition of Runequest, but I couldn't find them (not even in Call of Cthulhu). So I did some looking online. Baggage camels typically travel at human walking speed, with the handlers walking beside, so the caravan will travel an average of 6 hexes/day. Hill hexes will halve the movement rate. Camels need to be watered once every three days in the summer, so I'll take that into consideration should anything go wrong. It's late summer now.

Each day, Ni'arouj needs to make a Navigation (80%) roll to lead the caravan to the next stopping place on the route. Hills increase the difficulty to Hard (skill x2/3). Travelling along the coast of the lake grants an automatic success.

Scenes will change in response to encounters & events.

As of scene 1, the caravan has spent three days travelling. The first day they left Anzakàr and travelled down mountain roads to the first camp. The second day traversed rocky desert to a frontier fortress, and the third continued through rocky desert to an oasis amongst the dunes. Here the mercenaries turned back.

So scene 2 begins on the 4th day. Before resolving that, however, I decided it might not be a bad idea to see where things stand between our heroine and her employer as outlined above, so-- 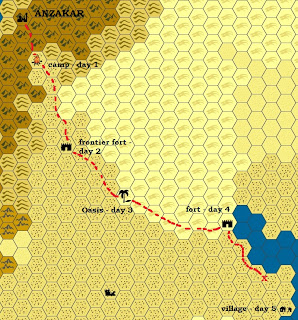 The caravan travels the whole day through the rocky desert without so much as spotting a bird flying overhead. Towards evening the air becomes a bit sweeter and less parching, as a cool wind sweeps into the desert from over the lake. Their destination is an Anzakàrite fort near the shore. "At least I won't have to worry about desert creatures or brigands tonight," thinks the relieved sorceress.

[Q: Are there any problems at the fort? Unlikely: 47, Yes.
Q: What's going on? Inform/Tactics]

Ni'arouj trots ahead on her camel to greet the guardsmen on the wall above the gate. She comes back to address the caravan as the portcullis is being raised. "Good news everyone," she says, "we can sleep within the walls tonight and stable the camels inside too. Most of the soldiers are away fighting bandits. I dare say those left guarding the fort are lonely, and just want some company."

[In case it might affect things, I decided to see which way the army went. Going clockwise on the points of a compass starting with North, 1d8=6: South West.
Q: What are they fighting? (rolling each as Unlikely odds until a yes comes up) Monsters? No; Bandits? Yes.] 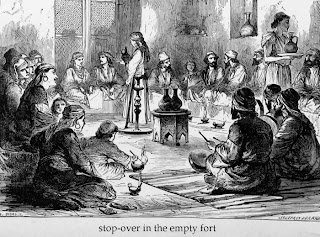 Lachaidiga is at first reticent to be seen by the soldiers, lest she be recognised. But as she does not know any of them, and there are so few, she decides the promise of a decent conversation is worth the risk. The ranking officer can tell by Lachaidiga's speech and bearing that she is one of the nobility, and offers to let her dine at her table, an invitation which the sorceress is happy to accept. The soldiers have been stationed here a long while, and are eager for news of the City. Lachaidiga is very obliging, and decides to take the opportunity to sound them for information on her own predicament. She relates the story of her flight from the wedding as if it were just the latest gossip, and casually inquires whether any such fugitives have passed through the fort lately. She is relieved to hear that they know nothing of such events, and joins in at the general laughter at such improper behaviour.

[rolls for the above:

Lachaidiga needed to roll an Influence (63%) check to get information out of the soldiers, and a Deceit (59%) check to pretend the gossip wasn't about her. Rolls of 07 and 48 both succeeded.]

Lachaidiga sleeps soundly that night. In truth, she has been sleeping quite well since joining the caravan, but this is the first night she has fallen asleep feeling relaxed and reassured rather than collapsing from exhaustion.

The next day sees easier travel. Travelling along the lake shore is so much nicer than trudging through the rocky wasteland. There are waterfowl to observe, plants, and even some fish are caught by some of the more enterprising nomads for lunch. High spirits and an easy route results in a trip of record speed. By mid-afternoon the lakeshore village of Pahem is in sight.

But the sharp-eyed caravan mistress spots something amiss out on the plain, and decides to send the sorceress to investigate. 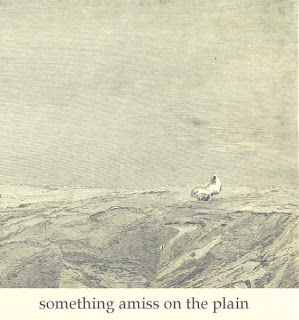